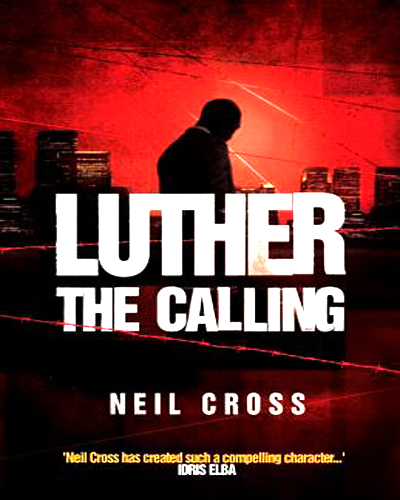 Neil Cross is the creator and sole writer of the international hit BBC crime drama series
Luther
. He was previously a lead writer for
Spooks
and continues to write widely for TV and film. He is also the author of several acclaimed novels, including the recent thrillers
Burial
and
Captured
.

The right of Neil Cross to be identified as the author of this work has been asserted by him in accordance with sections 77 and 78 of the Copyright, Designs and Patents Act, 1988.

A CIP catalogue copy for this book
is available from the British Library.

Typeset by M Rules
Printed in the UK by CPI Mackays, Chatham ME5 8TD

This book is dedicated to the memory
of Gwen Kooznetzoff.

John Luther, a big man with a big walk, crosses the hospital car park, glistening with night rain. He strides through sliding doors into Accident and Emergency, approaches the desk and badges the Filipino triage nurse.

‘That’s the police officer?’ She glances at her monitor. ‘He’s in cubicle eighteen. Over on the far side.’

Luther marches through the waiting area, weaves through nurses in rubber clogs. He ignores the moans of the binge drinkers, the beaten women, the self-mutilators, the overdosers.

He sweeps aside the heavy curtain to cubicle 18 and there’s Ian Reed, sitting tieless on the edge of the bed.

Reed is blond and lean, tense by nature. The blood on his white shirt has dried in patches. He’s wearing a soft surgical collar.

Reed’s got a couple of stitches in his scalp, a torn ligament, bruised ribs. Bruised kidneys too; he’ll be pissing blood for a week or two.

Luther pulls up a plastic chair. ‘What about the neck?’

‘Sprained. They had me in a headlock. Dragged me out the car.’

Luther lowers his voice to a murmur. ‘So why’d they do it?’

‘You know Julian Crouch? Property developer. Used to run a few club nights – House of Vinyl, Betamax, Intersect. And a recording studio down in Camden. But he’s on the downslide.’

Reed explains that Crouch owns half a terrace in Shoreditch; six houses. He’s got a buyer lined up, some Russian who wants to develop the site, turn it into a gym in time for the Olympics.

Crouch is servicing massive debts. And he’s divorcing. He needs a buyer; but only five of the six terraced houses are available to sell.

‘So,’ says Luther. ‘Who lives in house number six?’

Luther groans because Reed is sentimental about old servicemen. It’s landed him in grief before.

‘And what?’ Luther says. ‘This bloke Crouch is trying to force him out?’

‘So why doesn’t he just move?’

‘He call the police?’

‘Thing about Bill Tanner,’ Reed says, ‘he’s a game old bastard. He’s got heart.’ This is Reed’s highest compliment. ‘He takes photos of these hoodies, hands them in as evidence. He’s shit scared, he’s an old man living by himself, being harassed every night. So uniform goes round, picks up the hoodies. They don’t mention Crouch. And they’re out before the sun’s up. Next day, maybe the day after that, Bill gets a proper visit. Two heavies.’

‘This’ll be Kidman and Tonga?’

Luther crosses his arms and stares up at the strip light, dotted inside with the desiccated carcasses of dead flies. ‘So what did you do?’

‘What do you think? I went to see Crouch. Told him to lay off Bill Tanner.’

Luther concedes with a shrug. ‘When was this?’

‘A couple of days ago. Then tonight I’m coming home, I’m about to park, when this Mondeo rear-ends me. Before I can get it together, two blokes get out, run round, drag me out my car and give me a right kicking.’

Luther glances at the neck brace. ‘And this is at your place? Your flat?’

‘On my own doorstep.’

‘It was definitely Kidman and Tonga?’

‘I know it was Tonga because he’s the biggest fucker I ever set eyes on. Plus the tattoos. And I know it’s Kidman because, well, I know Kidman. We’ve had dealings.’

‘What kind of dealings?’

‘He’s just around. On the edge of things.’

‘Can’t prove it was them. And even if I could – so what? Crouch rolls out another bunch of cunts to lean on poor old Bill Tanner. Bill won’t move. They’ll end up killing him, one way or another. He’ll have a heart attack. A stroke. Whatever. Poor old sod.’

‘But there are better ways to do this stuff,’ Luther says.

‘That old man served his country.’ Reed is clenching and unclenching his jaw. ‘He was there at D-Day. He’s eighty-five fucking years old and he tried to do things the right way and his country let him down.’

‘All right,’ Luther says. ‘Keep your hair on. What are you asking me to do?’

‘Just pop in on him. Make sure he’s all right. Take him some milk and a loaf of bread. A few tins of dog food. Not the cheap stuff. Meaty chunks in jelly. He loves his little dog.’

‘What is this thing with old people?’ Luther asks. ‘They’d rather freeze to death than feed cheap food to their pets.’

Reed would shrug, if he could.

The backpack does not contain a laptop.

On Clayhill Street, a Smart car reverses into a small parking space. The driver, a young Asian woman, gets out and hurries to her door clutching her handbag. She looks at the killer in passing, but doesn’t really see him.

The killer walks on. He turns onto Bridgeman Road with a sense of magnitude.

He marches along the frost-buckled pavement until he comes to number 23.

Behind the rusty gate and the overgrown hedge, number 23 is a handsome, double-fronted Victorian house.

The killer opens the gate. It squeaks, but he doesn’t mind: it must squeak every night and every day.

He stands in the front garden, which is a small paved area sheltered by high hedges. A green wheelie bin in one corner.

He lingers in the shadow of the house. It seems churchlike, pregnant with the future.

He thinks of standing underneath a great railway bridge as a locomotive shrieks overhead, the shocking power of it. That’s what the killer feels inside him, now: the shriek and rattle and thunder of a great engine.

He snaps on the latex gloves he’s kept rolled in one pocket of his pea coat. Then, from the other pocket, he removes a pair of needle-nosed pliers.

He walks to the side of the house. His legs are trembling. He follows the vertical line of the drainpipe until it meets the small, square drain around which grows sparse London grass.

He kneels to snip the telephone wire close to the ground. Then he pockets the pliers and returns to the front door.

From his pocket, he removes a set of house keys.

He grits his teeth. With great care, he inserts the Yale key into the lock and slowly turns it. The door snicks open as he leans a shoulder into it. Quietly, so quietly.

When the gap is wide enough, he slips through like smoke.

Into the wall near the door is set a plastic keypad. A small red light flashes. The killer ignores it, and sharks through a haze of the Lamberts’ scent: their clothes, their deodorants, their perfumes, their cleaning products, their bodies, their sex.

He enters the dark living room and sets down his backpack.

He shrugs off his pea coat, folds it and lays it on the sofa. He unzips the backpack and removes a pair of painter’s bootees. He slips them over his shoes.

Then he wriggles into a pair of paper overalls. He pulls up the elasticated hood. He stands there in the white paper jumpsuit and the thin rubber gloves.

He reaches into the backpack and removes his tools: a taser, a silvery roll of duct tape (one corner folded over for easy access), a scalpel, a carpet knife.

At the bottom of the rucksack, rolled into a sausage, is a small polar fleece blanket with satinette edging.

He lays the blanket on the sofa. Looks down at it, a pallid rectangle.

The killer’s spirit balloons and seems to leave his body. He hovers above himself.

He avoids the fifth step, slips back into his body, and proceeds into darkness.

Luther kills time in the waiting area by flicking through a tatty old
Heat
magazine.

In the far corner, a tramp with ash-grey dreadlocks bellows at God, or perhaps that he is God. It’s difficult to tell.

Reed limps out around 3.15 a.m. Luther takes his coat and helps him through the doors, through the main entrance, blazing bright.

Reed yearns for a big house, a big garden with a trampoline in it, a horde of kids to bounce on it – his own kids, their friends, their cousins, their neighbours.

Reed dreams of community, of pub lunches on Sunday, of street parties, of wearing comedy aprons as he cooks sausages at well-attended barbecues. He dreams of being adored by his children, adoring them in return.

At thirty-eight, he’s been married four times and is childless.

A Loop in Time by Graham, Clark
Verdict Suspended by Nielsen, Helen
Desired (Restless Nights) by Brenton, Mila Elizabeth
S'wanee: A Paranoid Thriller by Don Winston
Unhinged by Sarah Graves
The Singing Bone by Beth Hahn
Dead Dogs by Joe Murphy
My Sunshine by Emmanuel Enyeribe
The Hearing by John Lescroart
When We Were Saints by Han Nolan