The Case Against Owen Williams 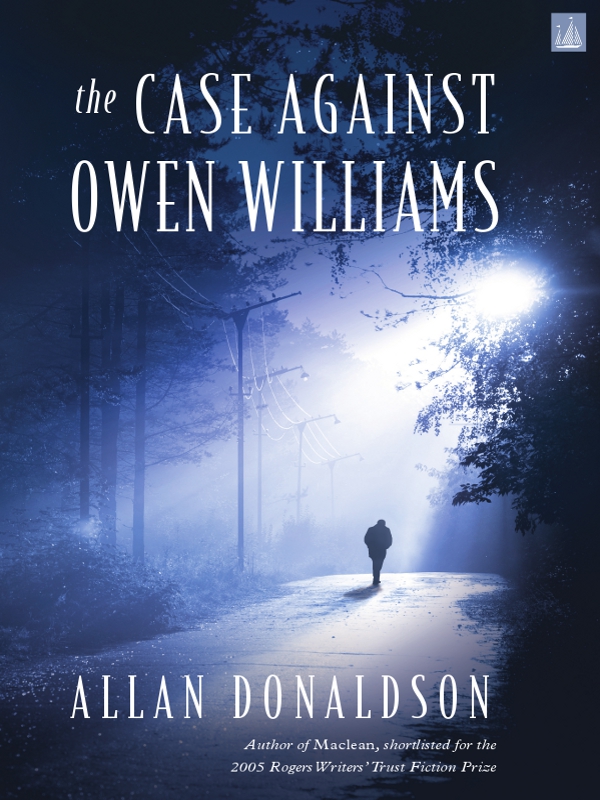 A finalist for the 2005 Rogers Writers' Trust Fiction Prize and one of
Globe and Mail fiction reviewer Jim Bartley's “Bartley's Top Five”
books of 2005.

“Note to book-chat pooh-bahs: This book merits a media flurryâ¦. Donaldson's simple device of inserting John's ghastly war memories directly, without preamble, into the body of the main narrative pays huge dividends. Without writerly display, he communicates not only the ambushing of John's psyche by old traumas (his past is always present) but the unfathomable fact of life's random doling out of horror and beauty.”

“With sharp, incisive prose, Donaldson illuminates one ex-soldier's search for peace that left this reader humming along to the barely remembered âPack up your troubles in your old kit bagâ¦' ”

“
Maclean
may be modest in scope, but readers should be lavish in their praise of this fine novel.”

“Allan Donaldson's first novel,
Maclean
, is a finely detailed study of a man buffeted by fate whose story stays with you long after you put the book down.â¦A small, hard but brilliant gem of a book.”

the
CASE AGAINST
OWEN WILLIAMS

Copyright Â© Allan Donaldson 2010
E-book Â© 2010
All rights reserved. No part of this book may be reproduced, stored in a retrieval system or transmitted in any form or by any means without the prior written permission from the publisher, or, in the case of photocopying or other reprographic copying, permission from Access Copyright, 1 Yonge Street, Suite 1900, Toronto, Ontario M5E 1E5.

This novel is a work of fiction. Names, characters, places, and incidents are either the product
of the author's imagination or are used fictitiously. Any resemblance to actual persons, living
or dead, events or locales is entirely coincidental.

We acknowledge the financial support of the Government of Canada through the Book Publishing Industry Development Program (BPIDP) and the Canada Council, and of the Province of Nova Scotia through the Department of Tourism, Culture and Heritage for our publishing activities.

Dominion Day, 1944, fell on a Saturday. Elsewhere across Canada, the shipyards and factories worked on without ceasing, turning out the materiel of victory. But in Wakefield, New Brunswick, population 5,783, nothing that was postponed until Monday was going to lengthen the war by one second, so the town took its holiday as usual and staged the parade that in some form or other it had staged every July 1 since 1867.

In front of the cenotaph a small reviewing stand had been set up, decorated with red, white, and blue bunting, and as noon approached a thin crowd of peopleâthe patriotic, the bereaved, the lonely, the poor, the idleâbegan to gather near the courthouse. They waited on the sidewalks in such shade as they could find, and as the town clock began to strike twelve, they heard from out of sight up the street the drums and bugles of the local company of the Royal Canadian Army Cadet Corps. It was the signal for the reviewing party to descend the steps of the courthouse and take their places on the standâthe mayor of Wakefield with his chain of office, Captain Ernest Fraser of the Seaforth Highlanders of Nova Scotia, and Colonel (retired) J. MacGregor Blaikie, late of the 85th Infantry Battalion, now honourary commander of the local branch of the Royal Canadian Legion.

There was a minute of expectancy, and then around the curve of the street, under an arch of elm trees heavy with summer, the parade appeared, led by Corporal Drost of the
RCMP
in his dress scarlet and a colour party of the Legion bearing the Union Jack, the Red Ensign, and the Legion banner. Behind them marched the brass band of the local militia, and as the colour party approached the reviewing stand, it took over from the bugle band and struck up “The Maple Leaf Forever.” Colonel Blaikie and Captain Fraser saluted. The mayor stood stiffly at attention. The band passed and was followed by a company of the Legion, then the bugle band and two platoons of cadets, and finally, not so much the climax of the parade as an ignominious afterthought, a platoon of Captain Fraser's Seaforth Highlanders.

As they passed, Colonel Blaikie pointedly dropped his salute, and there was a scattering of derisive whistles from the crowd. Captain Fraser had known that marching them would be a mistake, but Area Headquarters had ordered them to be marched, so marched they had to be.

The difficulty about Captain Fraser's Seaforths was that they were what had become known popularly as “Zombies” âmen who had been conscripted but who had refused to volunteer to go overseas and could not under existing law be forced. Now with the casualty lists rolling in once again from France, they had become an object of furious debate in Parliament and of growing unpleasantness on the street.

Most of the Zombies were hidden away in camps in the West, where they were supposed to be waiting to repel a Japanese invasion, but some of them were scattered around the country, guarding things the army had decided ought to be guarded. In Wakefield, they guarded a makeshift basic training camp that had been set up in the summer of 1940 on a big island in the middle of the river, used to train one battalion through one bitter winter, and then abandoned.

The buildings that had been run up still stood there, unused and uselessâjerry-built huts already rotting away under their leaky roofsâbut four times a day a guard detail of half a dozen Seaforths marched down Main Street and across the bridge to the island, and the detail they had relieved marched back. It was an operation that had about it, like many things that went on in those days, an atmosphere of dreamlike absurdity, and it was possible to imagine the army forgetting about the Seaforths altogether and leaving them to march back and forth there forever.

It had befallen Captain Fraser to command the Wakefield Armoury, the Wakefield Basic Training Camp, and this platoon of military outcasts, not because he himself was a Zombie, but because he was thirty-nine years old with eyesight too bad to allow him to be assigned to a combat unit. Nevertheless, as he watched the platoon slouch past, not so smart even as the high school cadets, and as he saw out of the corner of his eye Colonel Blaikie drop his salute, he felt that something of their disgrace inevitably rubbed off on him, and he resolved once again to set about pulling strings to get some kind of overseas posting. Or, failing that, any posting anywhere away from this dismal hole and these dismal misfits.

When they had passed, Fraser ended his salute with the snap he had been taught long ago before the war. He shook hands with the mayor, saluted the colonel, and descended the reviewing stand, revolving in his mind some act of vengeance for the day's humiliation. A route march would be the thing. On Monday, a punitive route march for sloppiness on parade. March the little bastards in full kit until their legs fell off. He would have Sergeant MacCrae see to it.

1- The Glass Room 2- The Spirit Stone -3-bear Hugs-4- Believe by Beverly Machado
Spin Control by Niki Burnham
Shark Bait (The Grab Your Pole Series) by Cooksey, Jenn
Year of the Tiger by Lisa Brackman
Fatelessness by Imre Kertesz
Aggressor by Nick Cook
Fallen Nation: Party At The World's End by James Curcio
Roll With It by Nick Place
Miranda the Great by Eleanor Estes
Infinite Desire by Danielle Jamie