Tags: #The Case Against Paul Raeburn

The Case Against Paul Raeburn 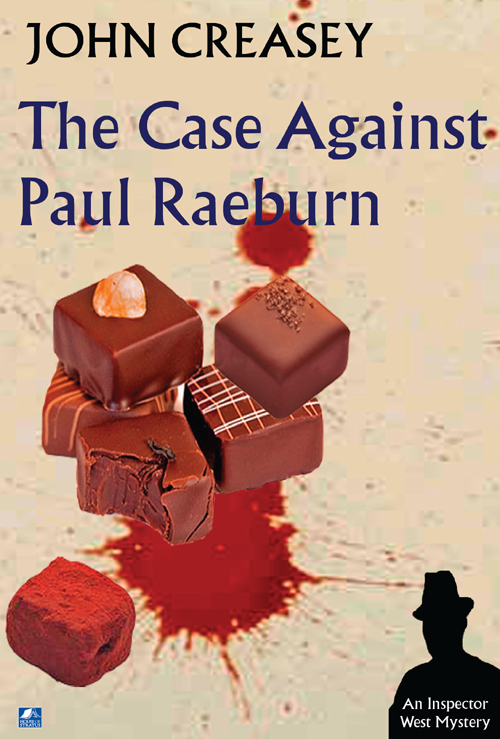 The Case Against Paul Raeburn

The right of John Creasey to be identified as the author of this work has been asserted.

John Creasey – Master Storyteller - was born in Surrey, England in 1908 into a poor family in which there were nine children, John Creasey grew up to be a true master story teller and international sensation. His more than 600 crime, mystery and thriller titles have now sold 80 million copies in 25 languages. These include many popular series such as
Gideon of Scotland Yard, The Toff, Dr Palfrey and The Baron
.

Creasy wrote under many pseudonyms, explaining that booksellers had complained he totally dominated the ‘C’ section in stores. They included:

Never one to sit still, Creasey had a strong social conscience, and stood for Parliament several times, along with founding the
One Party Alliance
which promoted the idea of government by a coalition of the best minds from across the political spectrum.

He also founded the
British Crime Writers’ Association
, which to this day celebrates outstanding crime writing.
The Mystery Writers of America
bestowed upon him the
Edgar Award
for best novel and then in 1969 the ultimate
Grand Master Award
. John Creasey’s stories are as compelling today as ever.

The powerful car moved swiftly and quietly along the road which led across Clapham Common. The beams of its headlights caught the grass and trees, making them a vivid green. It was nearly one o’clock in the morning, and the driver had not seen a soul since he had turned on to the Common road. He was humming under his breath.

The driver saw him dart forward, and took his foot off the accelerator. The man stopped in the middle of the road, his feet wide apart, his hands held above his head. The driver trod heavily on the brake and the car jolted to a standstill. As he did so, the man who had caused the emergency came quickly towards the car, and opened the door.

“Well, well,” he said in a sneering voice, “if it isn’t Mr Raeburn. The great Paul Raeburn himself! How’s it going, Mr Raeburn?”

In the light from the dashboard, his face showed thin and pale. His hands, gripping the side of the door, were white. Despite the sneer, his nervousness was unmistakable.

The driver showed no signs of nerves. “Who are you, and what’s this all about?” he demanded.

“What a question to ask, Mr Raeburn,” jeered the little man. “You don’t forget your old friends as easily as all that, surely. Just think back a few years. Perhaps it will help you if I say ‘Southampton’. You ought to have a good memory.” He now sounded breathless, as if he had been running. “Driving about in a Rolls, too. You’ve come up in the world, haven’t you?”

The driver took a cigarette case from his pocket.

“You’re Halliwell,” he said in a flat voice.

“Well, isn’t that marvellous!” exclaimed Halliwell. “You’ve remembered your old pal! You didn’t think I was alive, did you, Paul? You thought you were safe from me, but what a mistake. Supposing you get out and we have a little chat?”

“Supposing you get in beside me.”

“I’m not falling for any tricks like that, Paul,” Halliwell said. “I’m older and much smarter than I was, and I want a chat with you.”

Raeburn sat quite still, watching the other, seeing the indications that Halliwell had screwed himself up to a great pitch to do this. He had a pinched, hungry look and his eyes were watering.

Then, suddenly: “How much do you want?” Raeburn asked.

“How much do I want?” Halliwell stretched out his hand and clutched Raeburn’s wrist. “That’s easy to answer. I want half of everything. I’m after a fifty-fifty partnership. I’m going into partnership with a millionaire! You are a millionaire, Paul, aren’t you? One of the great ‘I ams’. But if I were to tell all I know, where would you be?”

“You wouldn’t do that, would you?” asked Raeburn softly.

Halliwell began to laugh, but the laugh turned into a fit of coughing. Raeburn waited, quite impassively, but his fingers were tight on the cigarette case. Once he raised it, like a club.

Some distance ahead, the wavering light of a cycle appeared; Halliwell was still coughing when the cyclist passed, but soon managed to speak again.

“I’m going to have my share back, they’re my only terms – full partnership, or I talk. I’ve served my sentence, three bloody years in jail. Years you owe me, Paul. If I talk, nothing else can happen to me, I’ve paid in full, but you – well, just you think about it.”

“We’ll talk where I want to,” insisted Halliwell. “I’ve worked it all out, to the last comma. I’ve watched you night after night, driving across the Common. Do you know I didn’t recognise you at first? I saw the Rolls, and used to think if my partner had acted rightly by me I’d be in a car like that. Then I recognised you, and saw how right I was.”

“If you won’t come and talk it over, I can’t help you,” Raeburn said flatly.

“You’ll come and talk with me,” said Halliwell “I’ll give you my address, and I’ll have some friends as witnesses. Don’t think you’ll get away with anything but a partnership, Paul.”

Raeburn said: “We’ll see about that.” He flipped open the cigarette case and pushed it under Halliwell’s nose, and Halliwell backed away in alarm. Raeburn glanced into the driving mirror, and saw no light reflected on it. He leaned out, and punched Halliwell savagely in the stomach, bringing his head forward; then he struck Halliwell behind the ear with a corner of the case. Halliwell grunted, and slumped against the car. Raeburn pushed him away, and he fell, dazed if not unconscious.

Raeburn turned off the headlights, stabbed the self-starter, slapped the gear into reverse, and drove the Rolls back a few yards, until the sidelights picked out Halliwell’s face, and even showed the mark of bleeding just behind his ear.

Raeburn moistened his lips as he looked at the offside wheel, then at Halliwell’s head. He clenched his teeth, put the car into forward gear and trod on the accelerator. The Rolls Royce surged forward, and jolted.

Raeburn changed gear and drove on, his lips still set very tightly, and he stared into the driving mirror. He saw no light; nor did he see a little man with a wriggly nose, who appeared from some bushes near the spot where murder had been done; he did not look at Halliwell, just stared after the disappearing car.

The man began to walk in the other direction, smiling faintly. The Common seemed completely deserted, until a cyclist appeared, fifty yards in front of him. The little man moved back into the shadows, and drew in his breath sharply when he saw a policeman’s uniform.

Several nights a week, Paul Raeburn drove from a club near the Common to his Park Lane flat. When feeling in the mood, he would drive for twenty miles out of London and return along the deserted roads, revelling in the speed of his car and the power under his control. It was a kind of relaxation. Tonight, he drove to Battersea, crossed the Thames and swung the car left, towards Fulham and Putney. Once at the top of Putney Hill, he turned towards Roehampton. Little traffic was about. Now and again he saw a policeman and his lips tightened, but his hands were steady.

Near Roehampton he pulled into the side of the road, leaned over to the back of the car, and took a flask from a pocket behind his seat. He unscrewed the cap, and put the mouth of the flask to his lips. He took three or four gulps, then took the flask away, and screwed on the cap.

He took out his cigarette case, lit a cigarette and examined each corner of the case; there was a faint red stain on one.

He got out of the car, wiped the case on the grass, slipped it back into his pocket, tossed the cigarette away, and took the wheel again. He sat still, thinking intently, then moved suddenly, rubbed his pigskin gloves over the door where Halliwell had touched it.

He was reversing when he saw the headlights of a car coming from Roehampton, and was in the middle of the road when he noticed the blue-and-white sign: police.

He waved the driver on. The police car passed, only to swing across his hood. He put on the brakes, staring at the two uniformed policemen who jumped out and hurried back.

He opened his window.

“Good evening, sir,” said one of the men. “Are you Mr Paul Raeburn?”

“Eh?” On the instant Raeburn’s voice became thick and hoarse, and he looked bleary-eyed as he peered at the man. “Whassat?”

“I said, are you Mr Paul Raeburn?”

“Of course you have, sir,” said the policeman, soothingly. “You’re not feeling well, are you?”