Read The Cause of Death Online

The Cause of Death 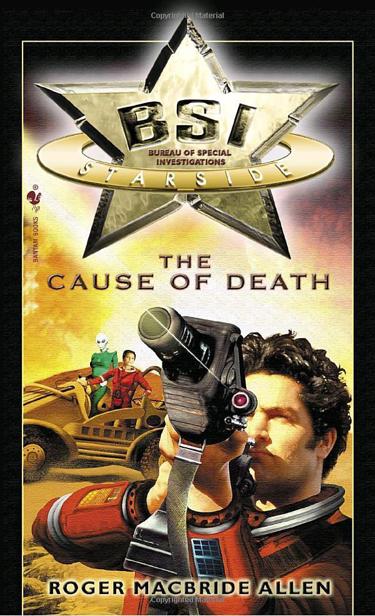 The Cause of Death

The Cause of Death azw 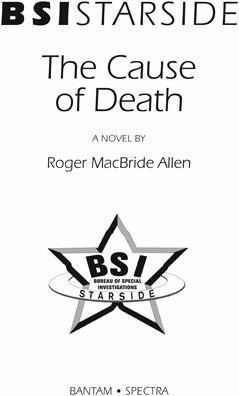 Don't miss the next exciting mission!

The shot struck the ground about twenty meters downhill from Georg, throwing up a flash of lurid yellow light against the night sky. Georg Hertzmann threw himself to the ground. Rock shrapnel and clumps of dust and dirt dropped out of the sky all around him for an unreasonably long time after the explosion. Georg remained motionless where he was until the last of the debris had fallen back.

"You can get up and start moving now, if you wish," said a small voice in his headphones. "Their shots are becoming increasingly inaccurate. I believe they have lost their lock on your position and are firing blind, by guesswork."

Georg replied in a low whisper, trusting his throat mike to feed an audible signal to his breast pocket, where the voice was coming from. "Then they're awfully good guessers. Those shots are close."

"But they didn't hit you with any of them--even when they had a tracking lock on you. I believe they are not trying to kill you--merely frighten you."

"And they're doing a good job of it." After a moment's silence, he spoke again. "Just how confident are you about all this?"

"Which gives me twenty percent odds that they are
really
trying to kill me. If I show myself and they get a new lock, I could find out the hard way."

"Granted," said the little voice. "But you cannot stay where you are indefinitely. If you do so, and they are not merely trying for capture, you will likely be killed, to the great inconvenience of our mutual endeavor."

Georg sighed. "I know things are different for Stannlar, but do bear in mind: if I get killed, it will be more than inconvenient. It will be permanent failure--not just for our work, but for me." Killing Cinnabex, or any Stannlar Consortium, and doing the job thoroughly, permanently, destroying all the backups, beyond hope of reassembly or revival, would represent something like a major industrial research effort.

"Your point is taken. My apologies. But the point remains that you cannot stay here."

"I know, I know. Let me think." He decided to risk rolling over on his side, in hopes of seeing more than the clump of dirt into which his nose was wedged. He moved as slowly as he could, cursing silently with every little spill of dirt and gravel that tumbled off him. The object in his breast pocket had been cutting into his chest a bit, and it felt good to get up off it. Besides, quite irrationally, he felt guilty about dropping his full weight on it, as if so doing might inconvenience the passenger inside.

The object was a silvery alloy disc with rounded edges, widening toward the center, looking for all the worlds like a miniature flying saucer out of the old-time pre-space paranoid urban folklore stories. In a sense, that was exactly what it was--except there was no little green man inside. Just a purple starfish.

Georg patted the disc affectionately. That purple starfish--and all the rest of Cinnabex--had been a good and loyal friend. Georg considered himself massively lucky that Cinnabex and her split-clone Allabex believed it a worthy use of their time to deal with anything as insignificant as human beings. Though, of course, right at the moment, "lucky" didn't seem a good description of his situation.

What
were
the Pavlat security officers trying to do, exactly? Kill him? Catch him? Chase him off? Whichever it was, how good were they at this sort of work? This was, in a sense, their home ground, and that might count for a lot--or not. They were city folk, and likely to be even more reliant on technology to help track him than he was in attempting to escape.

"Cinn," he whispered, "have you gotten anything yet on who these guys are?"

"I have managed a certain amount of signal intelligence. No decrypts, but I can see who is suddenly generating message traffic: the Thelm's Guard, and no one else."

"So it's all of Daddy's good little boys," Georg growled.

"More to the point, they are
not
the Thelek's good little boys, to use your informal and sarcastic mode of reference," Cinnabex replied. "The High Thelek's operatives would be far more likely to approach you with maximum aggression."

"These guys are plenty aggressive." George tried to think. If it was the Thelm's forces, coming from Thelm's Keep, they were probably no more familiar with the surrounding country than he was. He might actually have a slight advantage. They'd be relying on their fair-to-middling tech gear to track him. If he was careful, his camo suit was probably good enough to counter most of what their detection hardware could do.

Just then, another shot went off, and struck a good two hundred meters away.

Without a moment's thought, he rolled in the opposite direction, got up on his feet, crouched as low as he could, and started moving away from the blast, hoping that it would blind their instruments and distract their attention for a few vital seconds. He resisted the temptation to run, concentrating instead on slow and steady movement, both to avoid setting off motion detectors--and to avoid the dangers of tripping over something in the darkness.

Georg was using night-vision goggles--but night-vision gear was an unsteady crutch, good enough to make you trust the ghostly, blurry imagery too far. The Pax Humana trainers had beaten that much into his head. You could walk at a steady pace using night-gogs--but don't try to run. Besides, his gear was meant for observing nocturnal animal life--not evading a military force.

Georg spotted a sparse little clump of scrubby vegetation ten or twenty meters ahead. He moved in among the plants and knelt, still trying to stay low. It was a nice bit of natural cover--enough to screen him from all but the very best detection gear, but with enough bare spots and openings for him to get a good look around.

He had been moving north, and steadily uphill, toward a high pass between the peaks of two tired old mountains. If he could reach the pass, he would be over the northern border, and out of the Thelm's personal domain, out into the wider world where the Thelm's direct Will was not the final word and Thelm's Law did not apply. Georg did not know if merely crossing the border would be enough to save him, but there had been precious few other options open to him.

But was the pass itself still open? The approaches to the pass were wide at the valley floor, but contracted rapidly as it rose toward the pass itself. He was moving toward the narrow end of a funnel. He cranked his goggles up to max power and highest magnification and strained his eyes as he studied the top of the pass. There seemed to be some sorts of moving heat sources there, and the glints of what might be polished surfaces reflecting in starlight.

"Cinn--does your component have better night-sensing gear than I do? I think there's some action at the top of the pass, but I can't tell for sure."

"It likely does," Cinnabex replied. "Please remove the container from your pocket and hold it in your hand."

Georg opened his pocket, pulled the heavy disc out, and placed it flat in the palm of his hand. "All right," he said.