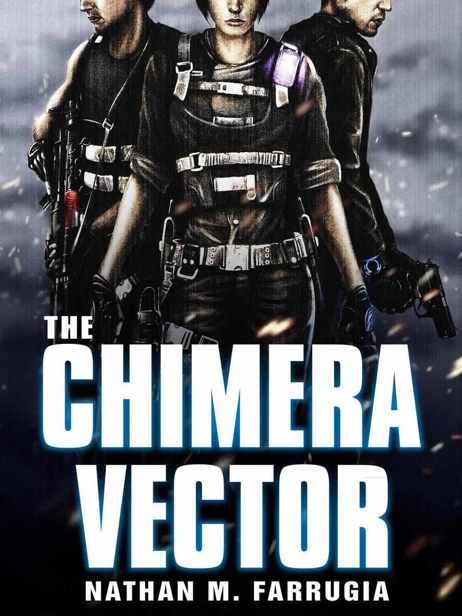 About
The Chimera Vector

Recruited as a child, Sophia is a deniable operative for the Fifth Column. Like all operatives, Sophia’s DNA has been altered to augment her senses and her mind is splintered into programmed subsets.

On a routine mission in Iran something goes catastrophically wrong. Bugs are beginning to appear in Sophia’s programming and the mission spins out of control.

High-speed chases, gun fights, helicopter battles, immortal psychopaths, super soldiers and mutant abilities are all in the mix in this edge-of-your-seat action-packed techno-thriller.

About
The Chimera Vector

About the Nathan M Farrugia

... One thing alone is certain, that man’s slavery grows and increases. Man is becoming a willing slave. He no longer needs chains. He begins to grow fond of his slavery, to be proud of it. And this is the most terrible thing that can happen to a man.

Sophia did not exist.

Unofficially, she squeezed the trigger. The .50 BMG round the size of a cigarillo punched through the Minister of Defense’s head, popping it like a grape. The empty shell jumped from her rifle’s ejection port and rolled across the rooftop. She ignored it and thumbed a new round directly into the ejection port and slid the cocking handle forward. The working parts were smooth and well oiled.

Through her Nightforce scope, she shifted her aim from the decapitated body to a nearby parked motorcycle. She aimed for the explosives concealed on the bike and fired. The gases propelled the round through the free-floating barrel, out the muzzle brake and across downtown Tehran with a sound like a thunderclap. The explosives detonated, tearing open the Minister’s car and shredding everything around it. A cloud of dust billowed outwards.

Sophia crawled back from the edge of the rooftop, taking her Steyr HS .50 sniper rifle with her. The explosives would mask the assassination. On the other side of the world, the Fifth Column were busy inventing a previously unknown terrorist group to claim responsibility for what Sophia hoped would be regarded as a suicide bombing. The Steyr HS .50 was an added precaution. Iran had purchased 800 of the sniper rifles a few years ago, so any trace of the Steyr HS would cast suspicion on Iran. One of several necessary steps to vilify that country and butter up the western world for the next Middle Eastern power grab.

The rifle’s bipod detached in seconds, but field stripping the weapon took a bit longer. She rolled up the rifle components in her sleeping bag and stuffed it into her backpack.

Damien, one of the operatives under her command, was waiting for her with unblinking hazel eyes at the bottom of the stairs, backpack slung over his shoulders. He scratched his unshaven neck and slipped on a pair of imitation Ray-Bans. He nodded and moved for the elevator.

Neither of them said a word as they took the elevator to the hotel’s second floor and exited the lobby slowly and calmly. They looked like American tourists fresh out of college. They jumped on the second-hand Honda 125 motorcycles they’d purchased yesterday and disappeared.

The team of three operatives slipped across the Iranian desert in a Land Cruiser, the Honda motorcycles stowed in the back. Headlights off, interior lights off. Nothing but the coal-black night. Sophia sat in the front passenger seat while Damien drove and Jay sat in the back.

Jay broke the silence with a tuneless song. Something about living in a pineapple under the sea.

‘Who died in an oil spill because of BP?’

Damien drew the Land Cruiser to a halt.

Over her shoulder, Sophia noticed Jay had something bright purple on his head. ‘Jay, are you wearing a glamor turban over your helmet?’

Jay was suddenly still. ‘No.’

A Citroën sedan peeled from the night, heading straight for them. Its driver seemed oblivious to their presence.

Sophia leaned forward, peering through the darkness. ‘What’s someone doing out here at this time?’

‘You mean other than assassinating the Minister of Defense?’ Damien said.

If anyone spotted them over the Iranian border, the operation would be compromised. She knew what had to be done. She drew her pistol.

She’d chosen Damien because he wasn’t as likely as Jay to push anyone’s buttons. It was just for appearances. A woman commanding a security team was going to attract more attention than she wanted. She didn’t want any.

Jay opened his window, hauled his belt-fed Minimi machine gun onto his lap and pulled the cocking handle back. His way of saying he was ready.

The sedan’s windows were up, but Sophia could hear exotic stringed instruments and the undulating pitch of a female vocalist. Through the Citroën’s fogged windshield, she recognized faces from the street where she’d assassinated the Minister of Defense. They were Takavaran, Iranian Special Forces, the Minister’s personal guards tasked with protecting him. And if they hadn’t seen Sophia’s team at the time of the assassination, they certainly had now.

Jay rested the Minimi’s barrel on his windowsill. ‘What’s the call, Soph?’

The sedan’s back wheels kicked dust into the air, accelerating fast.

Damien pumped the brakes and pulled hard on the steering wheel. Sophia braced herself as he swung the Cruiser to one side, lining Jay’s Minimi up perfectly with the Citroën.

Jay opened fire. The sound was deafening inside the Cruiser. Empty cases from his Minimi bounced past Sophia, hitting the glove box. Through her driver’s window, she saw the sedan slow to a crawl. She hit the decocking block on her Walther P99 pistol—or ‘007’ as Jay insisted on calling it—then held the pressel switch on her throat mike. ‘Damien. Check the vehicle.’

Before the sedan came to a complete stop, Sophia was running towards it, her P99 trained on the shattered back window. Damien was on her right, his Colt Canada C8 rifle leveled as they rushed forward. The rusty hood looked like it was covered in crushed rubies. It was sticky and wet.

‘They’re toast,’ Damien said from the driver’s side, his breath fogging in the cold.

He indicated with his C8 barrel to what was left of the two heads. In the back seat, three more heads, like split watermelons.

‘Lucky we saw them first.’ Sophia spoke into her mike. ‘Jay, plant one of our IEDs. Now.’

She opened the back door on her side of the sedan. A young man fell out, face down. His body glistened red. She looked through at the other door as Damien opened it. A young woman tipped sideways. Damien caught her mid-fall. Her head lolled. Strands of tangled wet hair stuck to his arms.

Trembling in the center of the back seat was another woman, her head still intact, her round face and white T-shirt dotted crimson. Sophia nodded to Damien. He leaned in to grab her. The woman resisted, clawing at him. He pulled her out and dropped her onto the dirt. She kneeled before him, screaming under his Colt’s barrel.

Damien looked up at Sophia, his finger closing over his trigger. ‘Drop her?’

Before she could respond, he nodded to her nine o’clock.

Another vehicle. Wider, higher. Humvee. It pulled up twenty meters short, hip-hop music rattling hillbilly armor. A shortage of armor kits had forced the soldiers to improvise with scrap metal.

‘What are they doing over the border?’ Damien whispered.

‘Must’ve been nearby, heard the crash.’ Sophia said softly into her throat mike, ‘Leave the IED.’ She nodded at Damien. ‘The floor’s yours.’

Five US Marines climbed out and approached her team, dusted boots crunching on grit. They were dressed in desert camouflage, helmets fitted with night-vision monocles. Their M16A2 rifles gleamed in the moonlight.

‘Lemme guess,’ the staff sergeant said. ‘They don’t know a stop sign when they see it?’

They didn’t know the occupants of the Citroën were Iranian military, Sophia thought.

‘No kidding,’ Damien said, stepping in front of the Citroën so they couldn’t get a closer look. He spoke with a mild northeast England accent, as he’d been briefed.

American private security weren’t warmly regarded here, even by the US military. British security, on the other hand, made a point of not shooting every civilian vehicle off the road. They kept a low profile, stayed out of danger and consequently had better relations with the US military. Hence the cover story Sophia’s fireteam was running with: they were British private security and Damien was commanding the assignment.

‘What you guys doing out here, man?’ the staff asked.

The staff looked down at the surviving woman. His upper lip trembled into a grin. ‘We’ll go ’head take this girl in. Figure you wanna travel light.’

The staff’s lower lip jutted outward slightly. Tobacco was lodged in a wad between his lower teeth and lip. He angled his head away from Sophia. She caught him winking at Damien.

One of the marines seized the woman by her slender wrists and led her to the back of the Humvee. He was Hispanic and might’ve passed for Jay’s younger brother.

The staff shot Sophia a lingering glance, taking in her dark hair, desert cams and gray eyes. She knew what he was thinking. The scar on her right eyebrow was probably making him hard.

He scraped the stubble on his chin with a calloused hand. ‘Hey man,’ he said to Damien. ‘Ya night-vision ain’t on.’

Goofballs 4: The Mysterious Talent Show Mystery by Tony Abbott
Kulti by Mariana Zapata
The Boy in the Black Suit by Jason Reynolds
The Agent by Brock E. Deskins
Cole (The Ride Series) by O'Brien, Megan
Legend of the Timekeepers by Sharon Ledwith
Scowler by Daniel Kraus
Suspended In Dusk by Ramsey Campbell, John Everson, Wendy Hammer
Still Standing: The Savage Years by O'Grady, Paul
A Gentleman and a Cowboy by Randi Alexander