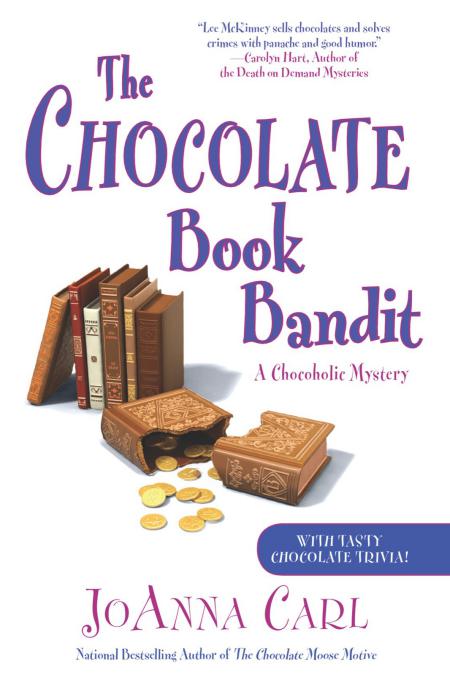 Chocolate to Die For
(omnibus edition)

First published by Obsidian, an imprint of New American Library,

OBSIDIAN and logo are trademarks of Penguin Group (USA) LLC.

In memory of Louise B. Moore, who made journalism a proud profession

I relied on many friends and relations to research this book. They included Deanna Deville, who suggested the title, and Ginny Weber, who explained antique keys and locks. I’ve always been pals with librarians, and this paid off with help from my son, John C. Sandstrom; from Holland, Michigan, librarian Robin Williams-Voight; and from two members of the Lunch Bunch, Susanna Fennema and Frantzie Couch. As usual, I also called on Michigan friends and neighbors Susan McDermott, Tracy Paquin, Judy Hallisy, and Dick Trull. Thanks also go to Ted Riley, who with a generous donation to the Lawton Arts for All Campaign purchased the right for the name Rhonda Ringer-Riley to be used for a character in this book.

Every native-born citizen of Warner Pier, Michigan, can diagram sentences. At least those over the age of twenty can.

This is because of the untiring efforts of the two Miss Ann Vanderklomps—aunt and niece—who between them taught English at Warner Pier High School over a period of sixty years. As a result of their work, everybody—
everybody
—who went to WPHS during that time period knows what it is to parse and how to do it.

This ability is not confined to those who have a literary bent. It is also held by people such as Tony Herrera, who has worked as a machinist ever since he finished high school, and whom I’ve never seen read a book. Tony has been one of my husband’s best friends since their days on the WPHS wrestling team. Then around two years ago Tony’s dad married my mother-in-law, so he and Joe—my husband—are now officially brothers.

Tony is intelligent, with a wonderful personality and top-notch mechanical skills, but when it comes to books, he waits for the movie version.

I was thinking this as Tony stood in the center of our living room. He held his nose, giving his voice a nasal tone, and at the same time he made that voice deep and dramatic. “The misplaced phrase is a bugaboo of the English language,” he said. “Be ever on guard against it. Why, only last week there was a reference in the newspaper—the newspaper!—to a dog who, and I quote, ‘returned to the inn where he and his master had been staying before going cross-country skiing.’”

Tony rolled his eyes dramatically and adjusted imaginary bra straps. Then he picked up his bottle of Labatt Blue beer and pretended to use a straw to drink from it, slurping rudely. His audience—all five of us—laughed loudly.

“That prepositional phrase is completely misplaced,” Tony said, putting the beer down. “It should have been at the beginning of the sentence. That would make it clear”—he shook his right forefinger, but pinched his nose with his left hand—“it was the dog, not his master, who went cross-country skiing.”

We all continued laughing as Tony released his grip on his nose. He spoke in his normal baritone. “Lee, you’re gonna love getting to know Miss Vanderklomp.” Then he dropped back into his seat on our couch and took a normal swig of Labatt Blue. “And don’t let that water bottle she carries everywhere fool you. It’s not water. It’s Pepsi. She’d kill a kid who brought a soda to class, but she’s never without her Pepsi.”

The six of us, all early thirtyish, were having dinner at our house on a late September evening. Three of the group—Joe, Tony, and Tony’s wife, Lindy—had grown up in this small Lake Michigan resort town and were Warner Pier High School grads. Two others, Maggie and Ken McNutt, had moved to Warner Pier five years earlier and both taught at that high school. I’m Lee Woodyard, and I came to Warner Pier from my native Texas to become business manager for TenHuis Chocolade, the luxury chocolate shop my aunt Nettie owns.

All six of us are firmly entrenched in the life of our little town, and Lindy, Tony, Joe, and I have a complicated series of interconnected relationships. Mike Herrera, Tony’s dad and Joe’s stepfather, owns two Warner Pier restaurants and a catering service, and has served as mayor of Warner Pier (population: 2,500) for three terms. Not only have Joe and Tony been pals since high school, but Lindy and I worked in the retail shop at TenHuis Chocolade when we were both sixteen. Several years ago Tony’s dad, Mayor Mike, hired Joe as city attorney. Then Joe’s mom married Mike, and Joe quit his city job to avoid any appearance of nepotism. And Lindy works for her father-in-law’s company, managing one of his restaurants and running the catering operation.

When you throw in the fact that my aunt—who, as owner of TenHuis Chocolade, is my boss—married the Warner Pier police chief, well, a normal mind would be boggled. If you drew a diagram of our relationships, it would look like a genealogy of some European royal family in which cousins routinely married cousins.

Maggie and Ken were the only normal people present.

“Aw, c’mon,” I said. “I’ve never actually met her, but I’m sure Miss Vanderklomp can’t be that bad. She’s funny-looking, true, since she does her hair like a Dutch boy, and she’s got that husky Dutch-boy build. She can’t help looking as if she’s ready to plug a finger in a dike.”

“It’s not anything to do with Miss Vanderklomp’s appearance,” Tony said. “She’s just a character. Unforgettable. And unstoppable. You’ll learn! Once she tells the board what the library is supposed to do, you might as well vote yea. She’s going to get her own way.”

“She can’t run the board,” I said. “She’s not even a member. She doesn’t have a vote.” I turned to Maggie and Ken. “How do y’all know her? Neither of you went to high school here, and she retired before you joined the faculty.”

Maggie groaned. “Thank goodness I don’t teach English. She’s a force of nature when it comes to the school. And it’s just the way Tony says—she makes her wishes known. And her wishes do not include the teaching, or even the reading, of certain books.”

“Oh, golly! Is she a censor? Ready to throw out
Catcher in the Rye
because the teenager in it thinks about sex?”

Everybody but me shook their heads. “No,” Lindy said. “
Catcher in the Rye
doesn’t bother her. It has ‘literary merit.’ But woe to the girl who gets caught reading a romance novel in the cafeteria. The way I did. I got a public lecture on my lowbrow taste.”

“Yep,” Maggie said. “One of the new English teachers told the sophomores they could pick anything they wanted for a book report. When Miss Vanderklomp heard that someone had done a Star Wars novel, she had the poor teacher in tears for permitting such a thing.”

At that point I heard the timer go off in the kitchen. I stood up. “Dinner is ready. Joe, you see if anybody needs a drink refill, and I’ll get the chicken Tetrazzini.”

Lindy followed me into the kitchen. “Anyway, Lee, you’re going on the library board at an interesting time.”

“Because of the new building, you mean?”

“Yes, and the new director. I met him Tuesday, and I don’t think he’s going to kowtow to Miss Vanderklomp and her buddies on the board. You may be in a fight over the selection of books pretty quick.”

“A fight? Over the books? I don’t plan on that. When they ask an accountant to join a board, they usually want somebody to look at the finances. Of course, the city handles the library’s finances, since this is just an advisory board.”

“Plus Carol Turley is on the board, and she’s treasurer of everything in town.”

“I think she’s secretary-treasurer of this board. That probably means the treasurer’s job is minor.”

“But who asked you to serve?”

“Jim Plaidy was the one who called.”

“It’s a city appointment. Look, Lindy, I thought it was a routine request. I just went off the chamber of commerce board, so I told Jim I’d think about accepting a new chore. The only complication is that I also got asked to join the tourism committee at the chamber, and I don’t want to take two new jobs at the same time. But you know the drill. If you’re going to live in a town like Warner Pier, you have to do what you can to keep the community functioning.”

“True. We’re not large enough to have a village idiot . . .” Lindy let her voice trail off, and I finished her sentence.

“So we all have to take turns.”

We both grinned at the old joke. I took the chicken Tetrazzini out of the oven. Lindy grabbed the beet salad, and we served up dinner. I forgot about Lindy’s warning.

Or maybe I didn’t. Something I can’t explain made me delay accepting the appointment to the library board. I decided I’d attend a meeting before I agreed to join the body.

Finding a body? That never crossed my mind.

The Millionaire's Secret Wish by Leanne Banks
The Short Sweet Dream of Eduardo Gutierrez by Jimmy Breslin
The Vanishing Game by Myers, Kate Kae
The Innocents by Margery Sharp
My Immortal by Erin McCarthy
The Wisdom of Evil by Black, Scarlet
Shadowfell by Juliet Marillier
Shifting Gears by Jayne Rylon
A Classic Crime Collection by Edgar Allan Poe
Jack by Amanda Anderson