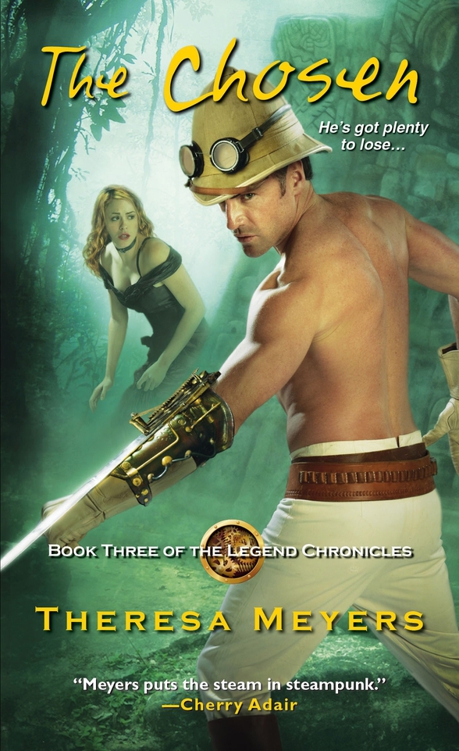 A DANGEROUS DANCE
Remington watched the blades move, analyzed them. “There’s a space between them in the arc of their swing. If we time things just right, we should be able to make each beat and move between them.”
He grabbed her hand and crouched into a running stance. “We’ll make a run for it on the count of three. One. Two.”
“No!” She yanked her hand from his. “There’s no clear path. Our movements have to be to a precise beat to make it through the blades.” She began to hum a tune as she watched the blades.
He crossed his arms. “And you have a better method?”
A glint of amusement lit her eyes. “I think we should go
dancing
.”
He glanced at the blades and frowned. “Dancing? Now?”
“It’d at least make death a bit more fun.”
Remington sighed, grasped her hand lightly, and spun her about, putting his hand at the base of her spine and holding her arm extended to the side to waltz with her.
“This what you had in mind?”
“Well, it’d be better without the swinging blades of death, but I suppose it’s the only chance we’ll get.”
He tracked the movement of the blades. “Keep humming that tune.”
She obliged, and together they began to sway. Remington glanced at the blades, counting silently in his head to the time of her tune. One. Two. Three. One. He moved them forward. Two. Their feet came together, and he pressed his hand against her waist signaling her to quickly turn as the first blade came swinging back. Three. He took a quick step backward as the blade finished passing behind them, waiting a beat before moving forward on the next step. The stream of air caused by the blade ruffled the back of his hair. That was close. Too close.
Books by Theresa Meyers
THE HUNTER
Book One of the Legend Chronicles
THE SLAYER
Book Two of the Legend Chronicles
THE CHOSEN
Book Three of the Legend Chronicles
THE INVENTOR
A Legend Chronicles Story
Published by Kensington Publishing Corporation
The Chosen
B
OOK
T
HREE
OF THE
L
EGEND
C
HRONICLES
T
HERESA
M
EYERS

Sal and Amanda Take Morgan's Victory March to the Battle of Cowpens by Mary Ann Solesbee
The Hanged Man by Gary Inbinder
Puppet by Eva Wiseman
My Prize by Sahara Kelly
Mama B: A Time to Speak by Michelle Stimpson
The Park at Sunrise by Brazil, Lee
The Wayward Alpha (Paranormal Werewolf Shifter Romance) by Wilson, Joanna
The Last Report on the Miracles at Little No Horse by Louise Erdrich
Time Flying by Dan Garmen
Some of Tim's Stories by S. E. Hinton