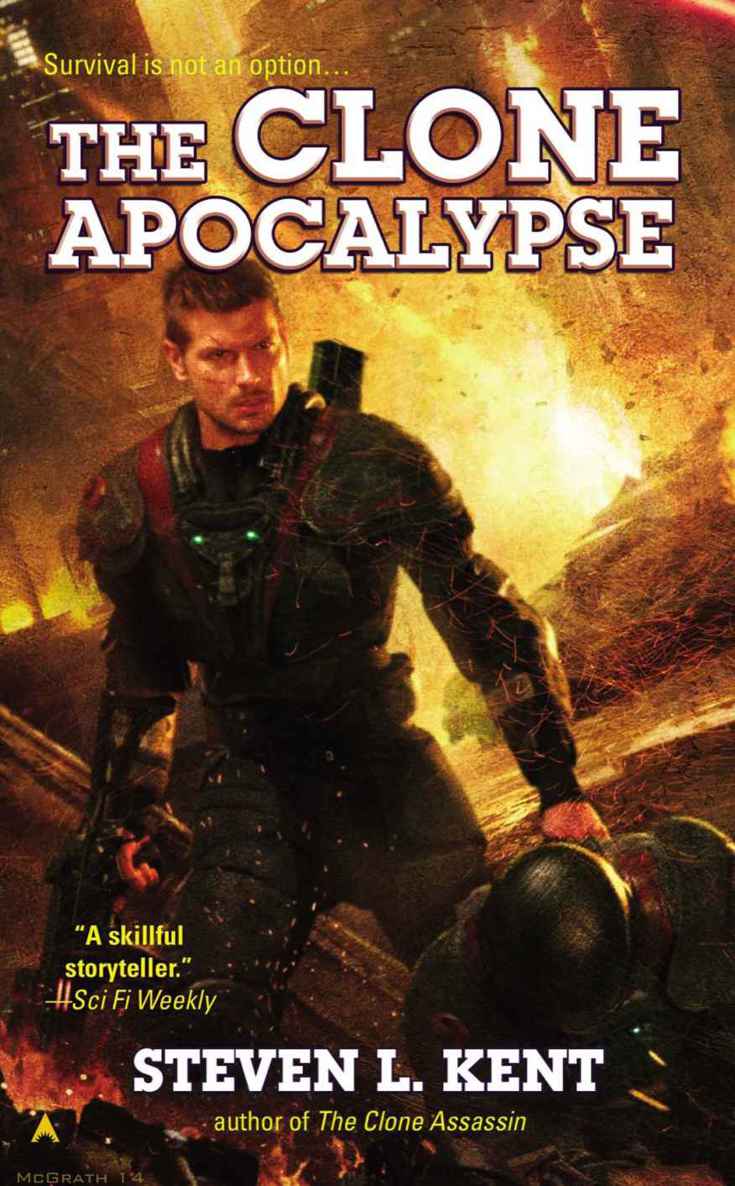 “Fans of Ian Douglas, Jack Campbell, David Sherman, and Graham Sharp Paul should all [find] something to enjoy in this series.”

“Compares well with the Star Fist series by David Sherman and Dan Cragg, the Lost Fleet series by Jack Campbell, and several series by Ian Douglas . . .
The Clone Sedition
takes the action back to its roots with humans fighting clones.”

“Virtually every chapter of every one of these books features at least some tense action sequences, often elaborately well-done.”

“Kent writes a fast-paced and interesting novel. His dialogue is realistic and his universe is well thought out and developed.”

“If you enjoy military science fiction, then this is the book for you . . . Fast-paced and hard-hitting. Punches, bullets, and nuclear bombs are not held back. The characters face hard choices and don’t regret them after they are made.”

“Offers up stunning battle sequences, intriguing moral quandaries, and plenty of unexpected revelations . . . [A] fast-paced military SF book with plenty of well-scripted action and adventure [and] a sympathetic narrator.”

“Exciting space battles [and] haunting, quiet moments after war has taken its toll . . . Military SF fans looking for stories that combine mystery, action, espionage, politics, and some thoughtful doses of humanism in exploring their not entirely human characters would do well to add Steven L. Kent to their reading lists.”

“A solid debut. Harris is an honest, engaging protagonist and thoughtful narrator, and Kent’s clean, transparent prose fits well with both the main character and the story’s themes . . . Kent is a skillful storyteller, and the book entertains throughout.”

“The first sentence gets you immediately . . . From there, the action begins fast and furious, with dark musings, lavish battle scenes, and complex characterizations . . .
The Clone Republic
feature[s] taut writing and a truly imaginative plot full of introspection and philosophizing.”

“A character-driven epic that understands that the best war stories are really antiwar stories . . . A smartly conceived adventure.”

Ace Books are published by The Berkley Publishing Group.

ACE and the “A” design are trademarks of Penguin Group (USA) LLC.

This book is dedicated to my niece Elizabeth, who always took my breath away, though she didn’t live to see eleven thousand days. My memories of her are filled with smiles and moonlight chats.

This book is also dedicated to Sean, who never saw a single sunrise, and to his parents, for whom the sun now rises more slowly.

Map of the Milky Way

PART I | THE CONQUERORS

A tomb now suffices him for whom the world was not enough.

—From the epitaph of Alexander the Great

If you want to make God laugh, tell him about your plans.

Following the examples of Chevrolet, Oracle, IBM, and ConAgra Foods, Microsoft moves its headquarters from the United States to Shanghai. Referring to their company as a “global corporation,” Microsoft executives claim they are still committed to U.S. prosperity, but with its burgeoning economy, China has become the company’s most important market.

Even with Toyota and Hyundai increasing their manufacturing activities in the United States—spurred on by the favorable cheap labor conditions—the U.S. economy becomes dependent on the shipping of raw materials and farm goods.

Armadillo Aerospace announces the discovery of broadcast physics, a new technology capable of translating matter into data waves that can be transmitted to any location instantaneously. This opens the way for pangalactic exploration without time dilation or the dangers of light-speed travel.

The United States creates the first-ever fleet of self-broadcasting ships, a scientific fleet designed to locate suitable planets for future colonization. When initial scouting reports suggest that the rest of the galaxy is uninhabited, politicians fire up public sentiment with talk about a new “manifest destiny” and spreading humanity across space.

JULY 4, 2110
RUSSIA AND KOREA SIGN A PACT WITH THE UNITED STATES

With the growth of its space-based economy, the United States reclaims its spot as the wealthiest nation on Earth. Russia and Korea become the first nations to sign the IGTA (Intergalactic Trade Accord), a treaty opening the way for other nations to become self-governing American territories and enjoy full partnership in the space-based economy.

In an effort to create a competing alliance, France unveils its Cousteau Oceanic Exploration program and announces plans to create undersea colonies. Only Tahiti signs on.

After the other nations of the European Economic Union, Japan, and all of Africa become members of the IGTA, France discontinues its undersea colonization and joins the IGTA. Several nations, most notably China and Afghanistan, refuse to sign, leading to a minor world war in which the final holdouts are coerced into signing the treaty.

More than 80 percent of the world’s population is eventually sent to establish colonies throughout the galaxy.

JULY 4, 2250
TRANSMOGRIFICATION OF THE IGTA

With most of its citizens living off Earth, the IGTA is renamed “The Unified Authority” and restructured to serve as a government rather than an economic union.

The government of the Unified Authority merges principles from the U.S. Constitution with concepts from Plato’s
Republic
. In accordance with Plato’s ideals, society is broken into three strata—citizenry, defense, and governance.

With forty self-sustaining colonies across the galaxy, Earth becomes the political center of a new republic. The eastern seaboard of the former United States becomes an ever-growing capital city populated by the political class—families appointed to run the government in perpetuity.

Earth also becomes the home to the military class. After some experimentation, the Unified Authority adopts an all-clone conscription model to fulfill its growing need for soldiers. Clone farms euphemistically known as “orphanages” are established around Earth. These orphanages produce more than a million cloned recruits per year.

The military does not commission clone officers. The officer corps is drafted from the ruling class. When the children of politicians are drummed out of school or deemed unsuitable for politics, they are sent to officer-candidate school in Australia.

On October 29, 2452, a date later known as the new “Black Tuesday,” a fleet of scientific exploration ships vanishes in the “galactic eye” region of the Norma Arm.

Having authorized the development of a top secret line of cloned soldiers called “Liberators,” the Linear Committee—the executive branch of the U.A. government—approves sending an invasion force into the Galactic Eye to attack all hostile threats. The Liberators discover a human colony led by Morgan Atkins, a powerful senator who disappeared with the Galactic Central Fleet. The Liberators overthrow the colony, but Atkins and many of his followers escape in G.C. Fleet ships.

Over the next fifty years, a religious cult known as the Morgan Atkins Fanatics—“Mogats”—spreads across the 180 colonized planets, preaching independence from the Unified Authority government.

Spurred on by the growing Morgan Atkins movement, four of the six galactic arms declare independence from Unified Authority governance in 2510. Two years later, the combined forces of the Confederate Arms Treaty Organization and the Morgan Atkins Fanatics defeat the Earth Fleet and destroy the Broadcast Network, effectively cutting the Earth government off from its loyal colonies and Navy.

In 2512, the Unified Authority and the Confederate Arms end the war by attacking the Mogat home world, leaving no survivors.

In 2514, an alien force enters the outer region of the Scutum-Crux Arm, conquering U.A. colonies. As they attack planets, the aliens wrap an energy barrier around the atmosphere. Called an “ion curtain,” the barrier prevents contact and communications.

In a matter of two years, the aliens spread throughout the galaxy, occupying planets deemed habitable by U.A. scientists. The Unified Authority loses 178 of its 180 populated planets before making a final stand on New Copenhagen.

During the battle of New Copenhagen, scientists unravel the secrets of the aliens’ tachyon-based technology, enabling the U.A. military to win the war. In the aftermath of the invasion, the Unified Authority sends the four self-broadcasting ships of the Japanese Fleet along with twelve thousand Navy SEAL clones to locate and destroy the Avatari home world.

2517
RISE OF THE ENLISTED MAN’S EMPIRE

The Unified Authority Congress holds hearings investigating the military’s performance during the Avatari invasion. When two generals blame their losses on lack of discipline among their cloned enlisted men, synthetic conscription is abolished and all remaining clones are transferred to frontier fleets—fleets stranded in deep space since the destruction of the Broadcast Network. The Navy plans to use these fleets in live-ordnance military exercises designed to test its new, more powerful Nike-class ships; but the clones thwart this plan by declaring independence.

After creating their own broadcast network, the clones establish the Enlisted Man’s Empire, a nation consisting of twenty-three planets and thirteen naval fleets. As hostilities continue between the Enlisted Man’s Empire and the Unified Authority, the Avatari return, attacking planets using a devastating weapon that raises atmospheric temperatures to nine thousand degrees for eighty-three seconds.

The Avatari attack three planets in December, 2517—New Copenhagen, a Unified Authority colony, Olympus Kri, an Enlisted Man’s colony, and Terraneau, a neutral nation. Working together, the Enlisted Man’s Navy and the Earth Fleet successfully evacuate Olympus Kri prior to the attack. Following the attack on Olympus Kri, the Avatari accelerate their attacks, incinerating a new populated planet every three days as they work their way toward Earth.

Despite the mutual threat, the Unified Authority renews its assault on the Enlisted Man’s Empire.

2517
DESTRUCTION OF THE AVATARI HOME WORLD

The Japanese Fleet locates the Avatari home world in Bode’s Galaxy. While the inhabitants of the planet have become extinct, its automated mining and military systems continue their destructive expansion.

After depositing all nonessential personnel on New Copenhagen to establish a new colony, the
Sakura
, the last ship in the fleet, launches a successful suicide attack on the Avatari planet.

2517
THE FALL OF THE UNIFIED AUTHORITY

Unaware of the Japanese attack on the Avatari home world, the Enlisted Man’s Empire divides its military into two groups. One group establishes a colony on the burned-out remains of Terraneau, while the other defeats the Unified Authority, establishing a clone-controlled government.