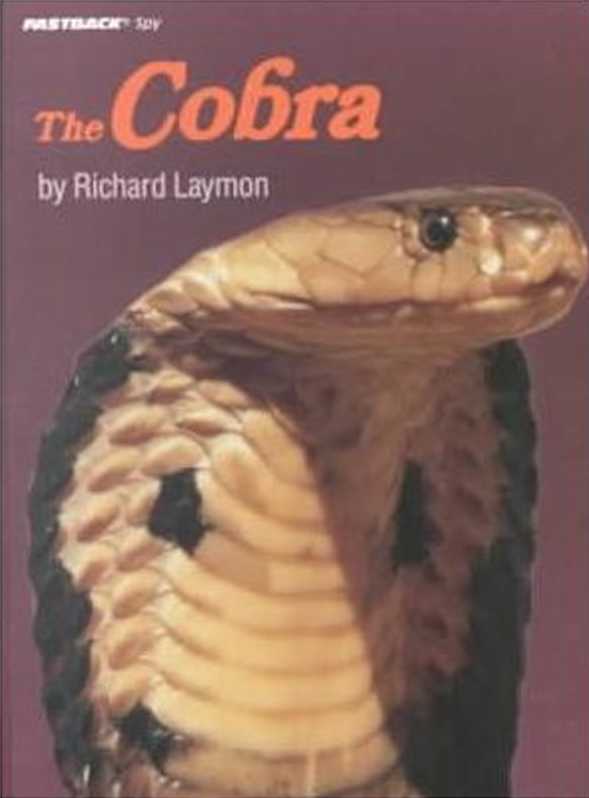 "T
here she is," Decker said, as they started to eat.

Blake Douglas took a bite of hamburger and watched the young woman step through the doorway of Bestburgers. She looked to be in her twenties. Her blond hair hung straight to her shoulders. She wore a sweat shirt, jeans, and leather boots. Her purse hung from her shoulder by a long strap. Blake was sure she was carrying a pistol in it.

"Don't let her looks fool you," Decker told him. "She's a snake, or she wouldn't be a member of the People's Strike Force."

Blake took a sip of his milk shake. The woman named Lana Jeffers walked to the counter, sat on a stool, and leaned forward to pull a menu from behind the napkin holder. It made him feel bad to think that someone so pretty was a terrorist.

"She comes in here at five in the afternoon every Monday, Wednesday, and Friday like clockwork," Decker said. "We thought the counterman might be her contact with the PSF, but we haven't seen any funny stuff. I guess she just likes the hamburgers."

"They're not bad," Blake said, taking another bite.

"We've been hoping she might lead us to the others," Decker went on. "But no luck, so far. That's where you come in."

Blake nodded. He felt a knot in his stomach, but he knew it had nothing to do with the burger. It was nerves. It was guilt. It was knowing he must try to become Lana Jeffers' friend, only to betray her.

Decker frowned at him. "What's wrong?"

Decker leaned forward. He put his elbows on the table and stared at Blake with narrow eyes. "The People's Strike Force doesn't play fair, either, pal. Look what they did last month in Los Angeles. They gunned down a guard and two innocent people during that bank job. Don't talk to me about playing dirty. We'll go after them any way we can."

Across the diner, Lana was talking to the man behind the counter. He wrote on a pad as she gave him her order.

"Was Lana with them in Los Angeles?" Blake asked.

"She was," Decker said. "The police nailed the other three, but she got away. She's a slick one, pal. As slick as they come."

"Did she do any of the shooting?" Blake asked.

"She did plenty. She sprayed around enough lead to open a pencil factory."

"Did she hit anyone?"

"No," Decker admitted. "Does that make her an angel? It makes her a lousy shot. What's with you, Douglas?"

"She'd put a slug in her own mother if she thought it would help their cause." Decker scowled at Blake. "Are you
with
us on this? Because if you're not, you'd better speak up quick." He glanced at his wrist-watch. "You've only got two minutes and thirty seconds."

Blake lifted the burger to his mouth, ready to take another bite. But he realized that he had lost his appetite. He put the burger down.

"Go on and back out," Decker said. "If you have cold feet, you've got no business being with the intelligence division.

Maybe you're
not
cut out for it. Maybe you belong back in a patrol car, wearing that nice blue uniform."

Blake turned his head as the front door of the diner swung open and two men stepped in. Hunter and McBain.

They both wore business suits. They both drew revolvers from under their coats as they walked toward the stool where Lana Jeffers waited for her supper.

"
P
olice!" Hunter yelled at the back of Lana's head. She sat up straight as if she had been poked in the back with a stick.

The diner went silent. Every head turned toward the two policemen and the woman. Blake, heart pounding, slid his chair back from the table.

McBain tugged Lana's purse. Its long strap flew off her shoulder. She started to turn.

Blake slowly stood up. He took a deep breath, trying to calm himself.

"Okay, Miss Jeffers," Hunter said. "Raise your hands slowly and lock your fingers on top of your head."

She did as she was ordered.

McBain reached under his coat. He took out a pair of handcuffs.

Blake reached under his own coat. He took out a Walther P-38 pistol . "
Freeze!"
he shouted.

The cops whirled around. Hunter got off a shot at Blake, then cried out and flopped backward as Blake's pistol roared. McBain swung his revolver toward Blake. Before he could fire, Blake pulled the trigger four times. The blasts pounded his ears. McBain spun, crashed over a stool, and fell. Hunter, already on the floor, raised his gun for another shot. Blake emptied his clip at the man. With each shot,

Hunter twitched as if he was actually being struck by a bullet. His blue sport shirt was soaked with red from broken bloodbags.

Lana Jeffers stared with wide eyes at the two fallen officers. Her face looked pale, almost gray. Then she looked at Blake. For just a moment, he saw horror and disgust on her face. It quickly passed. She made a tight, crooked smile, leaped off the stool, and jerked her purse out from under McBain's body.

With a nod, she ran past him. Blake waved his pistol at the shocked diners. "Nobody move!" he shouted. He walked backward to the door. Decker, still sitting at the table, smiled slightly to himself.

Lana was waiting just outside the door. "Have you got a car?" Blake asked.

"Okay, we'll take mine." Grabbing her hand, he pulled her along the sidewalk. She ran beside him, her white boots flashing over the pavement. She kept her eyes straight ahead as if she was afraid to look at him. Blake guided her around a corner at the end of the block. His car was at the curb. He jerked open the passenger door for Lana, then raced around the front and got in behind the steering wheel. With a glance in both directions, he saw that the street was clear. He whipped the car into a U-turn, and sped away.

"Slow down," Lana said after a few seconds. "You don't want to get stopped for speeding."

"Right," Blake said. He let up on the gas pedal.

For a long time, neither of them spoke.

Blake drove slowly through the San Francisco streets. He wondered what to say. This wasn't one of the endless rehearsals Decker had put him through, back at the station. This was real. The well-practiced story didn't seem quite so believable now. It seemed thin and fake. Lana would see through it. She would know he was a cop. Maybe she already knew.

Finally, Lana broke the silence. "You sure did a number on those jerks."

He looked at her. Her grin sent a chill up his back. He tried to smile. His face felt stiff. "I whacked them good, huh?"

"You've been doing good work for us," Blake said.

He nodded. "Carlos sent me out here on a job."

"Carlos?" She spoke the name of the PSF's leader quietly, almost in a whisper. "Carlos, himself, sent you? Who are you?"

He took out his pistol and handed it to Lana.

"A Walther P-38," she said. Then she saw the small ivory snake inlaid on its handle. The snake decoration that had been added by Decker's brother-in-law, a jeweler. "A cobra," Lana whispered. She gazed at Blake with wide eyes. "You're the Cobra?"

Lana had a stunned look on her face, almost like a teenager gazing at a favorite rock star. She handed the pistol back to him and said, "Holy smoke."

"I
've heard so much about you," Lana told him. "The Cobra. I can't believe it." She smiled at Blake. "I always pictured the Cobra as a big ugly brute with scars. You look so clean-cut and . . . handsome."

"Thanks," he said. He felt pleased and slightly embarrassed that she found him good-looking. More than that, he was relieved that she had bought his identity. Decker had told him that very few members of the People's Strike Force had ever seen the Cobra. The group's chief assassin worked alone, taking his orders straight from Carlos.
Show her the pistol,
Decker had said,
and you're in.
Thank goodness he was right.

"What were you doing in the restaurant?" Lana asked.

"Trying to eat. Then you walked in. Small world."

"Look, we'd better get off the streets."

"We've got a safe-house," Lana said. "Over on Taylor, just above North Beach. Let's go there. You can meet the others."

Blake frowned, but his heart raced. This is what they had hoped for. Lana was not only willing but
eager
to take him to meet the members of her attack group. But he knew he shouldn't show
he
was eager. "I don't know," he muttered. "It's bad enough that
you've
seen my face. The fewer people who can recognize me, the more I like it."

"You can trust them," she said.

"How many are there?"

"Four others," Lana told him. "They're all good people, dedicated to the cause. You can trust them," she repeated.

"I'll
be the one to decide who I can trust. Name them."

Blake nodded. "I've heard good things about Getz and Hogan," he said. He had heard of those two, all right, but nothing good. The pair was on the FBI's "Most Wanted" list for more than a dozen bank robberies. They had shot two guards. It came as news to Blake, however, that they were with the PSF. They weren't just a couple of greedy stickup artists, after all. They were terrorists stealing to buy weapons for their "movement." If he could bust those two . . . This was almost too good to be true.

"If there's you, Getz and Hogan," he said, "you must be planning a bank hit."

"The First Federal on Grant Street. Tomorrow. So how about it? I know they'd be really honored to meet you. You're something of a legend, you know."

"If you think I'm going in on the bank hit with you," Blake said, "forget it. That's not my job."

"No. I would never ask you to do that. You're much too important to be risked in a hold-up."

Lana gave him directions. A few minutes later, he turned onto Taylor Street. The road, above the Broadway tunnel leading to North Beach, slanted steeply upward between two rows of apartment houses. When he swung toward the curb to park, the car tipped so much that his stomach lurched. He thought for a moment that the car might flip over, but it didn't.