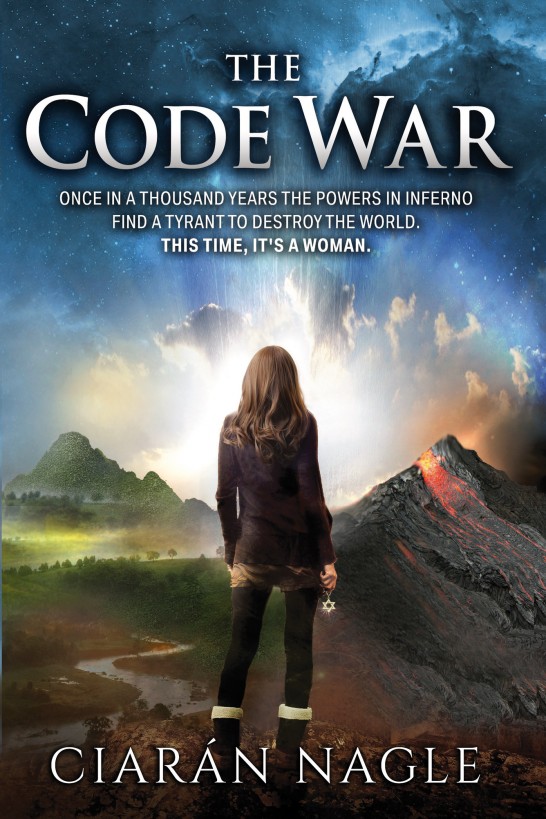 For Gill who has loved me twice as
much as I deserve for half my life and Alex who has halved my
worries and doubled my pride every year since he was
born.

Very minor characters
have been omitted.

Hideki
- Colonel of Intelligence in Inferno

Luke - angel and friend of Jabez

Inferno's
fallen angels basked in their achievement, circling the
airs above the city and smirking and nudging while they watched the
smoke plumes boil. Storm sprites hearkened to the crickle crackle
of the burning bamboo roofs and flew in, casually whirling up a
wind around a so-so fire and fanning it to a blaze. Home from home.
Faces of weeping children, their tears making rivers through the
grime of their cheeks gazed from the roadsides and searched the
scurrying crowds for a homecoming ma or pa. They searched long.
Orphans of three and four with celery-stick arms wailed beside
babes in rags while table-carrying neighbours rushed for the city
exits.

Still the artillery came in,
arcing unseen with unpredictable destination. Lightning doesn't
strike one place twice. But cannonballs do. And then don't,
insolently pulverising a factory or slum that had lain
unaccountably untouched as if blessed. No blessings today. Not for
the poor who had not the means to leave Nanjing before now,
believing their gods would yet intervene and save their starving
skins. Not for the rich who fled with their gold while over their
shoulders their opulent manors burned and their fountains erupted
in shards of hot iron and brick.

Many stayed where they were,
paralysed into inaction by the thought of worse horrors outside the
city walls. They sought solace with their faith and waited for the
gate of the hereafter to present its one-way arch towards them,
beckoning them beneath it towards a land where rice bowls were
never empty and ancestors came bearing gifts.

But the brave, the desperate and
the young took their stoutest boots and headed down the blasted
roads towards the river and the ocean. Talk of breakthroughs and
breakouts brought men together in unlikely alliances and always
there hovered in front of them the unspoken destination, the dream
of dreams, the beautiful country across the seas, America. Rumours
of relief ships and plucky captains sent by émigré sympathisers
continued to circulate among the credulous. When all hope faded the
human breast created hope anew. When that hope, too, died, the
breast created more in a circle of phoenix-like perpetual motion
that defied all reason.

If the infernal angels who wept in
delight at the chaos beneath them had turned their misty eyes
towards the south-west they would have seen a smaller procession.
These few, outside the ring of uniforms that choked the city, had
achieved the impossible, a landward flight. Three men, a woman and
a mule. Their story should have been at an end. But it was not. It
was stumbling towards its beginning.

The mule clopped slowly along the
stony path below several terraces of destroyed rice paddies.
Nanjing City lay behind, still on fire. Thick smoke and the smell
of burning flesh filled the air for miles around. Ahead, Tsuen
Liu's destination for the day, was a low farmhouse building at the
centre of several pig fields.
There were
no pigs to be seen. The pig huts were smashed or burnt. A thick
flock of magpies in a field beyond picked at some dead creature,
leaping onto its ribs and jabbing inside its carcase with their
hard beaks.

Tsuen looked anxiously behind.
These days an enemy was anyone who was hungry.
Whether they were the Qing or the rebels meant little. And
since everyone was hungry it meant there were enemies
everywhere.

He turned to his fellow travellers
and studied them while they caught him up.

Hong Li-Zhang
the merchant had either hidden or thrown away his expensive
cuff-links. Good.

Mya Ling's military coat covered
most of her body
. But he could see some
silk around her ankles and wrists. And she still wore her pretty
jade earrings, a magnet for robbers. That was pure foolishness. He
must speak to her about that. Their fourth companion, Li, was
stretched sideways over the mule. Tsuen slapped him on the back
anxiously and the old man mustered a groan. Still alive
then.

'Here we sleep the night. With their
approval if the owners give it. Without their approval if they
don't.' He took an old western flintlock pistol from the mule's
saddle, underneath Li's leg, loaded a ball and primed it with
powder from his pouch.

Using the mule as cover, the three
approached the farmhouse. Tsuen kept the pistol ready, but out of
sight.

There was no handle on the door and it
swung open easily. No lights welcomed them in. No smell of
barbecued meat beckoned them. The farm was deserted.

'Choose the driest room and lay
out the leathers there,' called Tsuen. He and Hong pulled Li from
the back of the mule and carried him indoors. Mya Ling lit a candle
and placed it in the hearth. They carefully stretched Li out on the
leather rain cover and Hong put a folded coat under his head. 'I'll
get some firewood,' called Hong, going out into the dark. Tsuen Liu
and Mya Ling unpacked the baggage, the cooking pots and their last
half jar of brown rice.

An hour later while the pot of rice was
heating up in the hearth, Li raised his head a little and opened
his eyes. He called the three together. They gathered around him,
fearfully, respectfully.

'I've eaten all the rice, pork and
cabbage that were allotted to me on the day I came into this
world,' Li began. 'I can't be bothered with the banquet of crab and
beef you're preparing. Nor the oysters and sweet cakes you've laid
out. I've had too much rich food these last months and it's rotting
my teeth. Nor do I want your new rice wine or your old imported
whisky, you can put them away.'

Mya Ling peeked underneath the
bandage around his side. She'd pick out the maggots later with a
clean wood splinter when he'd fallen asleep. The smell of the
putrefying flesh whipped their noses but none of them showed any
emotion or attempted to raise their scarf over their
face.

Li raised himself up jerkily on
one elbow, panting with the effort and pointing a shaky hand
towards Hong. The skin hung off his arm like bedsheets on drying
poles. But his eyes were bright and his voice became as strong and
rich as if he'd suddenly mislaid three score of his
winters.

'I am the Mountain Master, the Dragon
Lord, the Brother of Brothers.'

His audience bowed their heads in
renewed respect and fear. These words were enough to have them all
tongued, limb-amputated to the torso and chained in a rat-field if
the ruling Qing should hear of them.

'But you all knew this moment
would come and so it is good that you have pampered me and made me
fat. But now I am going to promote you two Tsuen Liu and Hong
Li-Zhang in the Fellowship of Brothers, for all my other marshals
are dead, killed by one crowd of fools or the other. Who cares
which? Henceforth you will both be equals and if you survive this
war you will take over my contacts, my friendships, my holdings, my
deals but most importantly you will take over Brother.'

The two men looked at each other.

Hong spoke for both. 'But Master
Li, you must not leave us equal, that way we will be
rivals.'

'Not so Ah Hong. Remember that in
Brother you are now brothers. In brotherhood there is no rivalry
for if one sibling prospers so does the other. You were not born
with the ties of kinship. But I now bind you together as if you
were flesh from flesh. In a moment you will both cut your hands and
mingle your blood. As the blood is red, so will be your
fraternity.'

Tsuen Liu was overtaken by the moment.
'Only give me your knife, master, and we will do this deed
now.'

'Let me be the one to cut myself first,
only say the word.' Hong was not to be outdone.

'Patience Ah Tsuen and Ah Hong.
For I have not finished. You know that in the matter of physic, the
triangle is the strongest form, moreso than a square or any other.
The foreigners have embodied this in their mystical god, he with
the three heads. Here in China we have our own triangle, the triad
of heaven, earth and man. Conveniently, fate has arranged matters
that as I prepare to leave this Earth and go to my ancestors, I
also am able to hand over Brother to a triad.'

The rice was cooked and Li paused
while Hong took the pan from its iron stand in the fire and placed
it on the brick hearth to rest. Li's breath was rattling through
his chest, the phlegm bubbling and scraping like a spade in wet
gravel. His blood had become septic and the poison was spreading
rapidly through his body. He began speaking again, his face
composed as if he knew his time was short.

'Mya Ling, I have watched you
these last few months as you have travelled with us. The emperor
was cruel to expel you, princess. But his foolishness is my joy.
You say little, but I know you are possessed of a fierce mind and
even fiercer ambition. I cannot force this upon you but, if you
will it, I would bind you to your new brothers. Give me your
hand.'

'Mya Ling, is it your will that you take
Tsuen Liu and Hong Li-Zhang as your brothers and they take you as
their sister until the end of your days and that the bond you three
make here will be stronger than any bond of friendship, love or
marriage that you may make hereafter?'

Mya Ling answered immediately with her
clear upper-class intonation. 'It is my will, Master Li. It is my
most urgent will.' Li smiled, pleased at Mya Ling's emphatic
reply.

'Then, Mya Ling, you are no longer
a lonely butterfly, free to the air. You have tied yourself to your
new brothers. You three are now family. You are triad. You are
Brother. Take my knife from my side and all of you cut your hands
and let your blood join and become one in symbol of what your
hearts have agreed.'

The knife was passed from one to the
next. Magenta droplets fell to the ground as palms were taken and
pressed together and eyes met around the new-born circle of
triplets.

'The deed is done. You are
family.
You are Brother.' Li coughed
again and a glob of red-streaked phlegm oozed from his mouth and
crept down his chin like a wounded slug. Mya Ling pressed her arm
to his face, wiping away the phlegm with her
silken cuff.