Read The Color of Distance Online

The Color of Distance 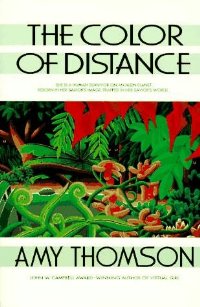 Annotation
Juna is the sole survivor of a team of surveyors marooned in the dense and isolated Tendu rainforest, an uninhabitable world for humans. Her only hope for survival is total transformation—and terrifying assimilation—into the amphibian Tendu species. Now she speaks as they speak. She fears what they fear. And in surviving as they survive, Juna will come to fathom more about her own human nature than ever before…
Nominated for Philip K. Dick Award in 1996.
The Color of Distance
by Amy Thomson
To Dr. Jane Smith, Dr. Robert Ireton, Dr. Jane Uhlir, and to the Swedish Hospital for saving my life. This book and all my subsequent work would not be possible without them.

Señores del Olimpo by Javier Negrete
The Death-Song of Conan the Cimmerian by Lin Carter
A Cursed Moon: A Weird Girls Novella (A Penguin Special from Signet Eclipse) by Robson, Cecy
A Tale from the Hills by Terry Hayden
Martha Schroeder by Lady Megs Gamble
Deadly Friends by Stuart Pawson
Rainbow for Megan by Corrie, Jane
Windblowne by Stephen Messer
The Professor by Cathy Perkins
Pisando los talones by Henning Mankell