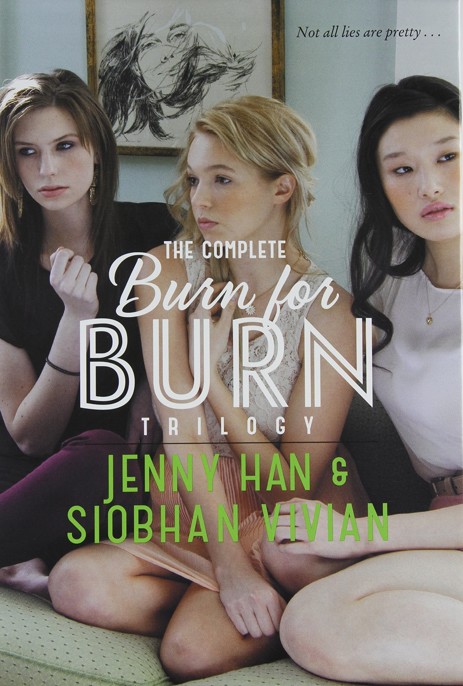 About Jenny Han and Siobhan Vivian

T
HE MORNING FOG HAS PAINTED EVERYTHING WHITE.
It’s exactly like one of my rabbit-hole dreams, where I get trapped, suspended in a cloud, and I can’t seem to wake myself up.

Then the foghorn blares, the mist breaks into lace, and I see Jar Island, spread out along the horizon just like in one of Aunt Bette’s paintings.

That’s when I know for sure that I’ve done it. I’ve actually come back.

One of the workers ties the ferry to the dock with a thick
rope. Another lowers the bridge. The captain’s voice comes over the loudspeaker. “Good morning, passengers. Welcome to Jar Island. Please make sure to collect all your belongings.”

I’d almost forgotten how beautiful it is here. The sun has lifted above the water, and it lights everything up yellowy and bright. A hint of my reflection in the window stares back at me—pale eyes, lips parted, windblown blond hair. I’m not the same person I was when I left here, in seventh grade. I’m older, obviously, but it’s not just that. I’ve changed. When I see myself now, I see someone strong. Maybe even pretty.

Will he recognize me, I wonder? Part of me hopes he doesn’t. But the other part, the part that left my family to come back, hopes he does. He has to. Otherwise, what’s the point?

I hear the rumble of cars parked on the freight deck as they get ready to drive off. There’s a bunch more on shore, in a long line that reaches the entrance to the parking lot, waiting to pull aboard for the return trip back to the mainland. One more week of summer vacation left. I step away from the window, smooth my seersucker sundress, and go back to my seat to get my things. The seat next to mine is empty. I stick my hand underneath, feeling around for what I know is there. His initials. RT. I remember the day he carved them with his
Swiss Army knife, just because he felt like it.

I wonder if things have changed on the island. Does Milky Morning still have the best blueberry muffins? Will the Main Street movie theater have the same lumpy green velvet seats? How big has the lilac bush in our yard grown?

It’s strange to feel like a tourist, because the Zanes have lived on Jar Island practically forever. My great-great-great-grandfather designed and built the library. One of my mom’s aunts was the very first woman to be elected alderman of Middlebury. Our family plot is right in the center of the cemetery in the middle of the island, and some of the headstones are so old and moss covered, you can’t even see who’s buried there.

Jar Island is made up of four small towns. Thomastown, Middlebury, which is where I’m from, White Haven, and Canobie Bluffs. Each town has its own middle school, and they all feed into Jar Island High. During the summer the population swells to several thousand vacationers. But only about a thousand or so people live here year round.

My mom always says Jar Island never changes. It’s its own little universe. There’s something about Jar Island that lets people pretend the world has stopped spinning. I think that’s part of the charm, why people want to spend summers here. Or
why the diehards put up with the hassles that come with living here year round, the way my family used to.

People appreciate that there isn’t a single chain store, shopping mall, or fast-food restaurant on Jar Island. Dad says there’s something like two hundred separate laws and ordinances that make building them illegal. Instead people buy their groceries at local markets, get prescriptions filled at soda-shop pharmacies, pick out beach reads at independent bookstores.