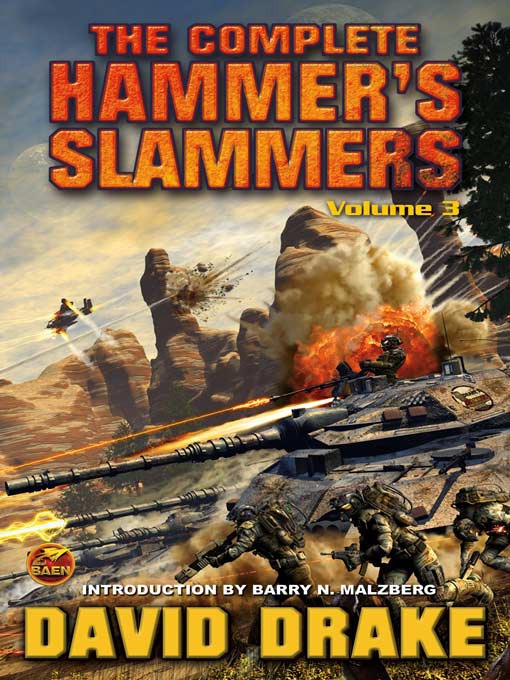 The Far Side of the Stars

The Way to Glory

When the Tide Rises

In the Stormy Red Sky

Caught in the Crossfire

All the Way to the Gallows

Other Times Than Peace

The Undesired Princess and The Enchanted Bunny (with L. Sprague de Camp)

Lest Darkness Fall and To Bring the Light (with L. Sprague de Camp)

The Tyrant with Eric Flint

The Belisarius Series with Eric Flint

In the Heart of Darkness

Belisarius I: Thunder Before Dawn (omnibus)

The Tide of Victory

The Dance of Time

The World Turned Upside Down (with Jim Baen & Eric Flint)

An Introduction By Barry N. Malzberg

“Hammers Slammers” no misnomer, that is what war accomplishes, combat demands, training forces: it hammers, it slams, it breaks you down, reduces to nullity. They’ll tell you that training first breaks you down “only to rebuild you” but that is snare and delusion, brochure hype, a sell because what training breaks it never replaces, cannot replenish, you become something else if you are restored at all, some foggy mountain breakdown self. War guts, eviscerates, makes all of us the same living and dead, in so doing blurs—as is training’s purpose—the line between living and dead to indistinguishability. The only difference in these extreme conditions is that the living perceive themselves as dead while the dead perceive nothing at all.

Believe this: it is not only the outcome of assessment, it is taken from the pulp of experience. I settled for Basic Training at Fort Dix in the last months of Eisenhower’s sleepy post-Korean Army; Drake was in the flames of Johnson’s Vietnam. We appear to have reached the same conclusions however and our work is much closer than one might think. The shuffling, burnt-away assassins of my FINAL WAR are Slammer dropouts, not rejects.

Extreme conditions flatten, make us all the same, combat is among the most extreme conditions and Drake’s Slammers, dead-gone mercenaries fighting in squalor for their own squalor inherit Remarque, Mailer, Heller. Only sentimentalists believe that there is a difference between mercenaries and “ideological” warriors and there are no sentimentalists in foxholes, no foxholes in sentimentalists. They grieve and gravitate these warriors and they leave ideology to the landlocked, protected homefront. Their ideology is their etiology: survival.

To live through Hammer’s Slammers is to pay the piper, to understand that these blown-out functionaries are our own idealized selves no longer idealized. David Drake has through furious refusal to compromise, from refusal to special plead, taken us into the bowels and apparatus of wartime as has no science fiction writer; he is the inheritor of the cold flare of military fiction’s history and his rifle sight, his shot pattern is exact. Exact and exacting; a freezing, burning, incontestable body of work.

To our architect and builder Derwood Schrotberger.

occupations. The fact that I was able to combine them is a

Those of you who notice the echoes of The Glass Key and Red Harvest by Dashiell Hammett in this book are correct. Those of you who don’t should go off and read Hammett’s splendid novels at your earliest convenience.

When I’m at the crux of my plotting, I tend to talk at those around me. When I did this time on the way to the state fair with friends, my wife, Jo, and Mark Van Name made suggestions which were precisely on point. I adopted both.

The room housing the Officers Assignment Bureau was spacious enough to have three service cages and seats for twenty around the walls of colored marble. Nobody was waiting when Major Matthew Coke entered, though a single officer discussed alternative assignments with a specialist.

Coke stepped into an empty cage. A clerk rose from her desk in the administrative area across the divider and switched on the electronics.

“Yes sir?” the clerk said pleasantly. “Is there a problem with your assignment?”

The Frisian Defense Forces reassigned scores of officers every week. Normally the operation was impersonal, a data transfer to the officer’s present station directing him or her to report to a new posting, along with details of timing, transport, and interim leave.

This office handled problems. President Hammer, in common with other leaders whose elevation owed more to bullets than ballots, felt most comfortable with a large standing army under his direct control. Professional soldiers are expensive, and unless they are used, they either rust, or find ways to employ themselves— generally to the detriment of the established government.

Hammer’s answer to the problem was to hire out elements of the Frisian Defense Forces as mercenaries. This provided training for the troops, as well as defraying the cost of their pay and equipment.

Sometimes the troops engaged were merely a few advisers or specialists. When somebody, a planetary government or the rebels opposed to it, hired a large force, however, the OAB would be standing room only.

Officers on Nieuw Friesland knew that the only sure route to promotion was through combat experience. The Frisian Defense Forces had sprung from Hammer’s Slammers, a mercenary regiment with the reputation for doing whatever it took to win . . . and a reputation for winning.

So long as Alois Hammer was President and the commanders of the Frisian Defense Forces were the officers who’d bought him that position in decades of bloody war, bureaucratic “warriors” weren’t on the fast track to high rank. You paid for your rank sometimes in blood, and sometimes with your life; but all that was as nothing without demonstrated success at the sharp end, where they buried the guys in second place.

Not everybody was comfortable with Hammer’s terms of employment, but the Forces were volunteer only and the volunteers came from all across the human universe; just as they had to Hammer’s Slammers before. A certain number of men, and a lower percentage of women, would rather fight than not. Alois Hammer’s troops had always been the best there was at what they did: killing the other fellow, whoever he was.

A draft going out to a hot theater was a ticket to promotion. Officers would crowd the Assignment Bureau, begging and threatening, offering bribes and trying to pull rank to get a slot. Mostly it didn’t work.

The Table of Organization for a combat deployment was developed by the central data base itself. Changes had to be approved by President Hammer, who was immune to any practical form of persuasion. The Assignments Bureaus were open because people prefer to argue with human beings instead of electronic displays, but that was normally a cosmetic rather than significant touch.

You could also appeal to Hammer personally. In that case, you were cashiered if you didn’t convince him. Old-timers in the Assignment Bureau said that the success rate was slightly under three percent, but every month or so somebody else tried it.

There were no large-scale deployments under way at the moment, but there were always glitches, clerical or personal, which had to be ironed out. The clerk smiled at Coke, expecting to learn that he’d been assigned to a slot calling for a sergeant-major, or that he was wanted for murder on the planet to which he was being posted.

Coke’s problem was rather different.

The clerk blinked in surprise. There were various reasons why an officer’s orders would be sealed within the data base, requiring him or her to apply in person to the bureau to receive them. Coke didn’t look like the sort to whom any of the special reasons would apply. He looked—normal.

Matthew Coke was thirty-four standard years old—twenty-nine dated on Ash, where he was born, fifty-one according to the shorter year of Nieuw Friesland. He had brown hair, eyes that were green, blue, or gray depending on how much sunlight had been bleaching them, and stood a meter seventy-eight in his stocking feet. He was thin but not frail, like a blade of good steel.

Coke was in dress khakis with rank tabs and the blue edging to the epaulets that indicated his specialty was infantry. He wore no medal or campaign ribbons whatsoever, but over his left breast pocket was a tiny lion rampant on a field of red enamel.

The lion marked the men who’d served with Hammer’s Slammers before the regiment was subsumed into the Frisian Defense Forces. Its lonely splendor against the khaki meant that, like most of the other Slammers veterans, Coke figured that when you’d said you were in the Slammers, you’d said everything that mattered.

Considering that, the clerk realized that Major Coke might not be quite as normal as he looked.

“Face the lens, please, sir,” the clerk said as she inserted the ID card into a slot on her side of the cage. Electronics chittered, validating the card and comparing Coke’s retinal patterns with those contained in the embedded chip.

A soft chime indicated approval. Coke eased from the stiff posture with which he had faced the comparator lens. He continued to smile faintly, but the emotions the clerk read on his face were sadness and resignation.

“Just a moment,” the clerk said. “The printer has to warm up, but—”

As she spoke, a sheet of hardcopy purred from the dispenser on Coke’s side of the cage. Coke read the rigid film upside down as it appeared instead of waiting for the print cycle to finish so that he could clip the document.

His face blanked; then he began to laugh. The captain at the next cage glanced at him, then away. The clerk waited, hoping Coke would explain the situation but unwilling to press him.

Coke tapped the cutter, then tossed the sheet across the counter to the clerk. “It says my new assignment is Category Ten Forty-seven,” he said as the clerk scanned the document. “That’s survey team, isn’t it?”

Just Like Heaven by Julia Quinn
The Metallic Muse by Lloyd Biggle Jr
Shattered by Eric Walters
PRIMAL INSTINCT by JANIE CROUGH
Let's Get Physical by Jan Springer
The Cheer Leader by Jill McCorkle
Susanna's Dream: The Lost Sisters of Pleasant Valley, Book Two by Marta Perry
Chasing Aphrodite by Jason Felch
RUSH: A Vampire, A Witch, A Secret, A Rush. by Cassandra Webb
The Tent: A Novella by Burke, Kealan Patrick