The Complete Novels Of George Orwell 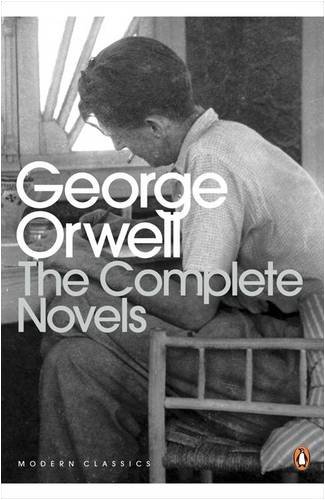 Eric Arthur Blair (George Orwell) was born in 1903 in India, where
his father worked for the Civil Service. The family moved to England in 1907 and in
1917 Orwell entered Eton, where he contributed regularly to the various college
magazines. From 1922 to 1927 he served with the Indian Imperial Police in Burma, an
experience that inspired his first novel,
Burmese Days
(1934). Several
years of poverty followed. He lived in Paris for two years before returning to
England, where he worked successively as a private tutor, schoolteacher and bookshop
assistant, and contributed reviews and articles to a number of periodicals.
Down
and Out in Paris and London
was published in 1933. In 1936 he was
commissioned by Victor Gollancz to visit areas of mass unemployment in Lancashire
and Yorkshire, and
The Road to Wigan Pier
(1937) is a powerful description
of the poverty he saw there. At the end of 1936 Orwell went to Spain to fight for
the Republicans and was wounded.
Homage to Catalonia
is his account of the
civil war. He was admitted to a sanatorium in 1938 and from then on was never fully
fit. He spent six months in Morocco and there wrote
Coming Up for Air
.
During the Second World War he served in the Home Guard and worked for the BBC
Eastern Service from 1941 to 1943. As literary editor of
Tribune
he
contributed a regular page of political and literary commentary, and he also wrote
for the
Observer
and later for the
Manchester Evening News
. His
unique political allegory,
Animal Farm
, was published in 1945, and it was
this novel, together with
Nineteen Eighty-Four
(1949), which brought him
world-wide fame.

George Orwell died in London in January 1950. A few days before,
Desmond MacCarthy had sent him a message of greeting in which he wrote:
‘You have made an indelible mark on English literature… you are
among the few memorable writers of your generation.’

Readers should note that the authoritative texts of these and other works
by Orwell, as published in

Except in the United States of America, this book is sold subject
to
the condition that it shall not, by way of trade or otherwise, be lent,
re-sold,
hired out, or otherwise circulated without the publisher’s
prior
consent in any form of binding or cover other than that in
which it is published
and without a similar condition including this
condition being imposed on the
subsequent purchaser

The novels of George Orwell, like his great essays, reflect, as in a mirror, constantly crystal-clear and frequently sharp with menace, the extensive changes of outlook and the shifts of values in British and indeed much of human society in the first half of the twentieth century.

Orwell was born Eric Blair in 1903 in an India that still seemed firmly fixed in an immutable Empire on which the sun never set. He attended Eton, his first publication was a patriotic poem printed by a provincial newspaper during the 1914–18 war, and in 1922 he joined the Indian Imperial Police and served in Burma for the next five years. On leave to England in 1927 he decided not to return to the Far East and resigned. From that time his life, until then seemingly cast in an upper middle-class mould and pointing towards a conventional career in Imperial service, took an entirely fresh course. Determined to become a writer, he lived in a succession of mean rooms on next to nothing in London and Paris, and it was in the latter city that his first article as a professional writer was published. He worked there as a kitchen porter in a luxury hotel and tramped and picked hops in Kent, later both conjured up so vividly in
Down and Out in Paris and London
. During this time, 1930–33, Orwell picked up a meagre living as well as he could, whether by reviewing or teaching, and he continued to write
Burmese Days
, completing it before going down with a bout of recurrent pneumonia. When the book came out in the U.S.A. (as no English publisher had bought it) Orwell had taken a job as a part-time assistant in a London bookshop.
Burmese Days
eventually appeared in England, a few months after
A Clergyman’s Daughter
came out in 1935. Early in the following year Orwell was reviewing fiction for the
New English Weekly
and was also gathering material for a book on the depressed areas of the industrial North of England,
The Road to Wigan Pier
.

When the Spanish Civil War began in 1936, Orwell foresaw the importance of its outcome to the future of Europe and before the year ended he had enlisted in Barcelona. While in the front line as a Republican militiaman with the P.O.U.M., the anarchists and the Trotskyites, he was shot in the throat by a sniper. He survived and returned to England to write one of the most forthright and fearless books on the Spanish struggle,
Homage to Catalonia
, which came out in April 1938, one of the first books to denounce the Communists for exploiting the struggle for their own ends. He was repeatedly rejected on medical grounds when he tried to enlist in the British Army in 1939 on the
outbreak of war. He subsequently served in the Home Guard, worked in the B.B.C. and became Literary Editor of
Tribune. Coming up for Air
was written immediately before the war, prophesying the war, and
Inside the Whale
and
The Lion and the Unicorn
followed in wartime. Just after the war ended and as Orwell rounded off a stint as
Observer
war correspondent in Europe,
Animal Farm
, that outstanding political satire against tyranny in general and the Stalinist betrayal of the Revolution in particular, was published and he began work on
Nineteen Eighty-Four
. Thanks to the money earned by the book in America Orwell found himself for the first time in his life, free from money worries, able to live on the island of Jura off the West of Scotland and to drop much of his journalistic work to concentrate on his book and a few last essays. But his health deteriorated progressively and seven months after the publication of
Nineteen Eighty-Four
he died in 1950 at the age of 46.

George Orwell holds a unique place in contemporary English literature. He used facts and his own observation and when there was no actual reporting to be done, invention took over, as in
Animal Farm
and
Nineteen Eighty-Four
, and his clear vision, realistic deduction and profound understanding of human behaviour enabled him to reach the inner recesses of the reader’s mind and startle him to reflection and self-examination. He said that one of his motive’s for writing was a ‘desire to see things as they are, to find out true facts and store them up for the use of posterity… In a peaceful age I might have written ornate or merely descriptive books… When I sit down to write a book, I do not say to myself “I am going to produce a work of art.” I write it because there is some lie I want to expose, some fact to which I want to draw attention, and my initial concern is to get a hearing.’

George Orwell certainly got his hearing and a constantly-increasing worldwide audience. Honesty, vigour and relevance to today are present in all these novels. Read any newspaper and
Animal Farm
is never far away and
Nineteen Eighty-Four
remains as true a description of the abuse of power as when he wrote it.

Mr Jones, of the Manor Farm, had locked the hen-houses for the night, but was too drunk to remember to shut the pop-holes. With the ring of light from his lantern dancing from side to side, he lurched across the yard, kicking off his boots at the back door, drew himself a last glass of beer from the barrel in the scullery, and made his way up to bed, where Mrs Jones was already snoring.

As soon as the light in the bedroom went out there was a stirring and a fluttering all through the farm buildings. Word had gone round during the day that old Major, the prize Middle White boar, had had a strange dream on the previous night and wished to communicate it to the other animals. It had been agreed that they should all meet in the big barn as soon as Mr Jones was safely out of the way. Old Major (so he was always called, though the name under which he had been exhibited was Willingdon Beauty) was so highly regarded on the farm that everyone was quite ready to lose an hour’s sleep in order to hear what he had to say.

At one end of the big barn, on a sort of raised platform, Major was already ensconced on his bed of straw, under a lantern which hung from a beam. He was twelve years old and had lately grown rather stout, but he was still a majestic-looking pig, with a wise and benevolent appearance in spite of the fact that his tushes had never been cut. Before long the other animals began to arrive and make themselves comfortable after their different fashions. First came the three dogs, Bluebell, Jessie, and Pincher, and then the pigs who settled down in the straw immediately in front of the platform. The hens perched themselves on the window-sills, the pigeons fluttered up to the rafters, the sheep and cows lay down behind the pigs and began to chew the cud. The two cart-horses, Boxer and Clover, came in together, walking very slowly and setting down their vast hairy hoofs with great care lest there should be some small animal concealed in the straw. Clover was a stout motherly mare approaching middle life, who had never quite got her figure back after her fourth foal. Boxer was an enormous beast, nearly eighteen hands high, and as strong as any two ordinary horses put together. A white stripe down his nose gave him a somewhat stupid appearance, and in fact he was not of first-rate intelligence, but he was universally respected for his steadiness of character and tremendous powers of work. After the horses came Muriel, the white goat, and Benjamin, the donkey. Benjamin was the oldest animal on the farm, and the worst tempered. He seldom talked, and when he did it was usually to make some cynical remark-for instance, he would say that God had given him a tail
to keep the flies off, but that he would sooner have had no tail and no flies. Alone among the animals on the farm he never laughed. If asked why, he would say that he saw nothing to laugh at. Nevertheless, without openly admitting it, he was devoted to Boxer; the two of them usually spent their Sundays together in the small paddock beyond the orchard, grazing side by side and never speaking.

The Core of the Sun by Johanna Sinisalo
Death on Beacon Hill by P.B. Ryan
Pájaros de Fuego by Anaïs Nin
Family and Other Accidents by Shari Goldhagen
Midnight Blood (Born Immortal) by Yanski, Nicole
In My Wildest Dreams by Christina Dodd
Enchantment & Bridge of Dreams by Christina Skye
Fire Girl by Matt Ralphs
The Devil's Light by Richard North Patterson
Redemption by Gordon, H. D.