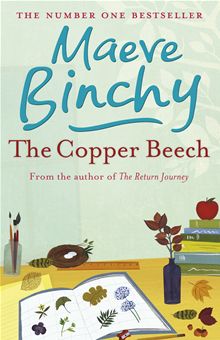 ‘Binchy’s novels are never less than entertaining. They are, without exception, repositories of common sense and good humour … chronicled with tenderness and wit’

‘High drama, betrayal and tragedy … it left me feeling stunned’

Maeve Binchy was born in County Dublin and educated at the Holy Child Convent in Killiney and at University College Dublin. After a spell as a teacher in various girls’ schools, she joined the
Irish Times
. Her first novel,
Light a Penny Candle
, was published in 1982, and since then she has written more than a dozen novels and short-story collections, each one of them bestsellers. Several have been adapted for cinema and television, most notably
Circle of Friends
and
Tara Road
. Maeve Binchy was awarded the Lifetime Achievement award at the British Book Awards in 1999 and the Irish PEN/A. T. Cross award in 2007. In 2010 she was also presented with a Lifetime Achievement award by the Romantic Novelists’ Association. She is married to the writer and broadcaster Gordon Snell. Visit her website at
www.maevebinchy.com
.

A Stone House and a Big Tree

For Gordon, who has made my life so good and happy,
with all my gratitude and love.

Most of the time he was very happy in Shancarrig, a peaceful place in the midlands. Most people only knew it because of the huge rock that stood high on a hill over Barna Woods. There had once been great speculation about this rock. Had it been part of something greater? Was it of great geological interest? But experts had come and decided while there may well have been a house built around it once all traces must have been washed away with the rains and storms of centuries. It had never been mentioned in any history book. All that was there was one great rock. And since Carrig was the Irish word for rock that was how the place was named – Shancarrig, the Old Rock.

Life was good at the Church of the Holy Redeemer in Shancarrig. The parish priest, Monsignor O’Toole, was a courteous, frail man who let the curate run things his own way. Father Gunn wished that more could be done for the people of the parish so that they didn’t have to stand
at the railway station waving goodbye to sons and daughters emigrating to England and America. He wished that there were fewer damp cottages where tuberculosis could flourish, filling the graveyard with people too young to die. He wished that tired women did not have to bear so many children, children for whom there was often scant living. But he knew that all the young men who had been in the seminary with him were in similar parishes wishing the same thing. He didn’t think he was a man who could change the world. For one thing he didn’t
look
like a man who could change the world. Father Gunn’s eyes were like two currants in a bun.

There had been a Mr Kennedy long ago, long before Father Gunn’s time, but he had died of pneumonia. Every year he was prayed for at mass on the anniversary of his death, and every year Mrs Kennedy’s sad face achieved what seemed to be an impossible feat, which was a still more sorrowful appearance. But even though it was nowhere near her late husband’s anniversary now she was pretty gloomy, and it was all to do with Shancarrig school.

Mrs Kennedy would have thought since it was a question of a visit from the Bishop that
she
, as the priests’ housekeeper, should have been in charge of everything. She didn’t want to impose, she said many a time, but really had Father Gunn got it quite clear? Was it really expected that those teachers, those lay teachers above at the schoolhouse and the children that were taught in it, were really in charge of the ceremony?

‘They’re not used to bishops,’ said Mrs Kennedy, implying that she had her breakfast, dinner and tea with the higher orders.

But Father Gunn had been adamant. The occasion was the dedication of the school, a bishop’s blessing, a
ceremony to add to the legion of ceremonies for Holy Year, but it was to involve the children, the teachers. It wasn’t something run by the presbytery.

‘But Monsignor O’Toole is the manager,’ Mrs Kennedy protested. The elderly frail parish priest played little part in the events of the parish, it was all done by his bustling energetic curate, Father Gunn.

In many ways, of course, it would have been much easier to let Mrs Kennedy take charge, to have allowed her to get her machine into motion and organise the tired sponge cases, the heavy pastries, the big pots of tea that characterised so many church functions. But Father Gunn had stood firm. This event was for the school and the school would run it.

Thinking of Mrs Kennedy standing there hatted and gloved and sorrowfully disapproving, he asked God to let the thing be done right, to inspire young Jim and Nora Kelly, the teachers, to set it up properly. And to keep that mob of young savages that they taught in some kind of control.

After all, God had an interest in the whole thing too, and making the Holy Year meaningful in the parish was important. God must want it to be a success, not just to impress the Bishop but so that the children would remember their school and all the values they learned there. He was very fond of the school, the little stone building under the huge copper beech. He loved going up there on visits and watching the little heads bent over their copy books.

‘Procrastination is the thief of time’ they copied diligently.

‘What does that mean, do you think?’ he had asked once.

‘We don’t know what it means, Father. We only have to copy it out,’ explained one of the children helpfully.

They weren’t too bad really, the children of Shancarrig – he heard their Confessions regularly. The most terrible sin, and the one for which he had to remember to apportion a heavy penance, was scutting on the back of a lorry. As far as Father Gunn could work out this was holding on to the back of a moving vehicle and being borne along without the driver’s knowledge. It not unnaturally drew huge rage and disapproval from parents and passers-by, so he had to reflect the evilness of it by a decade of the Rosary, which was almost unheard of in the canon of children’s penances. But scutting apart they were good children, weren’t they? They’d do the school and Shancarrig credit when the Bishop came, wouldn’t they?

The children talked of little else all term. The teachers told them over and over what an honour it was. The Bishop didn’t normally go to small schools like this. They would have the chance to see him on their own ground, unlike so many children in the country who had never seen him until they were confirmed in the big town.

They had spent days cleaning the place up. The windows had been painted, and the door. The bicycle shed had been tidied so that you wouldn’t recognise it. The classrooms had been polished till they gleamed. Perhaps His Grace would tour the school. It wasn’t certain, but every eventuality had to be allowed for.

Long trestle tables would be arranged under the copper beech tree which dominated the school yard. Clean white sheets would cover them and Mrs Barton, the local dressmaker, had embroidered some lovely edging so that they wouldn’t look like sheets. There would be jars of flowers, bunches of lilac and the wonderful purple orchids that grow wild in Barna Woods in the month of June.