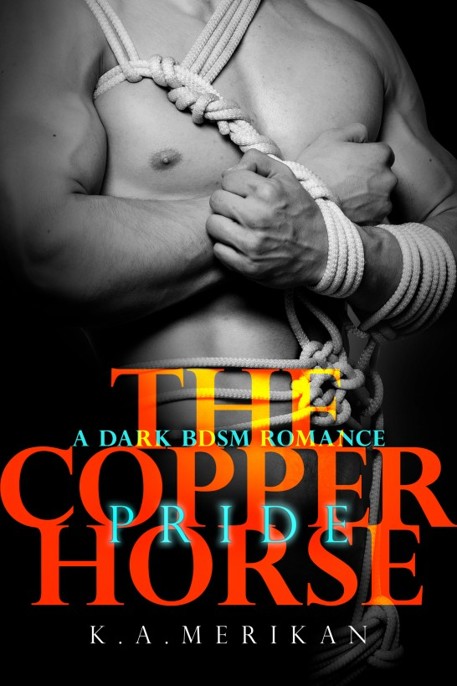 1907, twenty years into
the zombie Plague

After being kidnapped
into slavery by a powerful crime family member - Erik Dal, Reuben
is slowly adjusting to his new life. He is now Copper, Erik’s proud
stallion, serving in any way his master might require - from
pulling a cart, to pleasures in the bedroom. But his journey has
only begun, and as he becomes increasingly attached to Erik, his
devotion will be evaluated. From getting bred by another owner’s
stallion to Erik marking him forever, each of Reuben’s decisions
makes him more of a pet and less of a human.

Becoming Erik’s horse
isn’t just about getting pampered, wearing hooves and tack, or
providing the master with pleasure. It becomes a violent game of
prize and punishment, but when Reuben understands he too has
leverage - Erik’s attachment to him - he becomes an active player
in the negotiations of his stay at the mansion. But with his
master’s grand annual birthday party approaching, his loyalty will
be tested like never before, and the tasks he is to perform might
prove too much.

This is a work of
fiction. Any resemblance of characters to actual persons, living,
dead, or undead, events, places or names is purely
coincidental.

About
the Zombie Gentlemen Universe

Erik stared at
the wall, his muscles and bones as stiff as the statues sprinkled
all around his bedroom, but there was a fire burning deep in his
chest. The liquid heat drizzled down his body with the blood in his
veins, melting the tension at a rapid pace. What was he to say?

He'd lost all
hope for love the moment he'd lost Prancer so many years ago. He'd
given up on true companionship after that. He was a Dal, and he
could trust no one to become his true lover, and so he chose to
take what he believed was within reach. Beautiful men with strong
backs, thick thighs and tight asses paraded through Erik’s stable,
and those who could not adjust to what he required were let go.

Chestnut was
one of those who'd come around and even found pleasure in living
Erik’s fantasies, but to hear such a thing from him was enough to
choke the life out of Erik’s heart. Slowly he turned around to meet
the dark gaze of his stallion. Eyes warm like hot chocolate.
Nothing like the savage Erik had taken into his house a short few
months ago.

“All that you
give me, master… I can’t even comprehend it all,” Chestnut said and
stepped closer to Erik before kneeling on the floor. The angles of
his face were so perfect it hurt, a straight nose and lips that
belonged on an idealized Greek statue. And no wonder: Chestnut had
the body of a God, muscled and smooth, with just a dusting of hair
that matched the curls on his head.

Erik’s heart
throbbed in a way it never did before. It hurt and yet was so sweet
he couldn’t get enough. “Chestnut...”

“Please, let me
be yours tonight in bed, Master. Like man to man. All I want is to
give myself to you freely,” Chestnut whispered and reached his
shackled hands up in a silent plea.

Erik’s brain
stopped working, scrambled with the sweet syrupy heat inside him.
“I wasn’t ready for this,” he whispered, but his knees were already
bending toward the beautiful pony. “Is it only tonight?”

“I will be your
pony, Master Erik, but if I could be your man as well, my life
would be complete.”

Erik swallowed,
but he couldn’t trust himself to speak anymore and instead leaned
forward to brush his lips against Chestnut’s. His back became one
big tremble, and he had trouble blindly finding the cuffs that held
Chestnut’s hands prisoner. As unexpected as this was, he couldn’t
deny that his pony had an agreeable disposition lately. He was
eager to please Erik and spend time together. Would this mean Erik
could have back the life he'd shared with Prancer? Having a pony
and the handsome man within, too?

Chestnut leaned
closer, and the kiss on Erik’s ear sent a shiver down his spine.
“Thank you. I will make you happy, Master,” he said as Erik took
the cuffs off him.

Chestnut's body
was so warm and fragrant from the rosemary Jack had put on him
earlier. Erik couldn’t wait to spoon it from behind and feed on
delicious cheese, sharing delicacies and flesh. “Oh, Chestnut,
you’re the sweetest pony I’ve encountered in a very long time,” he
whispered, not yet able to confess his love, even though it had
been there for a long time, simmering beneath the surface.

“Oh, I love
cheese, Master,” Chestnut said in a cheery voice and reached toward
the cheese board with his freed hand. Instead of fetching the
cheese though, he grabbed the slicing wire and turned around to
Erik, smacking him on the head with so much force that Erik saw
stars and fell to the floor.

Erik groaned,
rising to all fours, overwhelmed by the colors dancing all around
him as his head spun. He looked down to the wooden panels, to the
drops of watered-down blood. Everything hurt. He didn’t know what
was going on.

“I’ll show you
a fucking cock, you motherfucker,” Chestnut hissed, and pushed Erik
back down on the floor, but before Erik could even scream, the
slicing wire bit into the sides of his lips. Chestnut pulled it
back, slowly ripping through Erik’s flesh while he pushed down
Erik’s breeches.

Erik’s blood
went cold, and he screamed into the wire, squeezing his buttocks as
tight as he could. Disoriented, he grabbed the wire on both sides
of his face, shocked by the metallic tang in his mouth. He’d been
tricked by a pony.

“Hans!”
screamed Erik, but it came out muffled and incomplete after his
head smashed against the floor once more.

“I’ll fucking
rip your ass apart and
then
kill you, you deviant.” Chestnut
hissed above him, and another pull of the wire filled Erik’s mouth
with blood. He was choking, his whole body was falling apart, and
yet the darkness Erik so craved never came, leaving him completely
sober to everything that was to happen.

Reuben enjoyed
all the eyes on him more than he’d admit. When he pulled Erik’s
cart through the streets of Bylondon, with warm breeze combing back
his hair and his master’s gentle commands directing him, he
couldn’t understand why he had feared this so much. He was carrying
the most notorious man in town, beautiful and noble Erik Dal. There
was no reason for shame, even with a bit in his mouth. And not all
the stares were even unpleasant. Some clearly caressed his body,
sliding over his hair, down his back, untouchably squeezing
Reuben’s ass. He was much more beautiful now than he’d ever been,
and it was all thanks to Master Erik’s care. But at the same time,
having been hidden away in Erik’s mansion for such a long time made
him timid around the crowds, especially now that he had more to
take care of than the bulk of his own body.

He had been
unsure how to enter the stream of people in front of Erik’s mansion
when they first left the cart room. At first Reuben had slowed
down, but knowing he'd made a commitment to Erik, who in return
would protect him, he took a deep breath and straightened his back.
In a beautiful mask and a glorious outfit that made him look even
bigger, more masculine, there was nothing to be ashamed of. The way
he was now, he looked far nobler than most people he’d encounter,
even if he was merely a slave. Most people were slaves: of their
work, of their betters. He at least had a beautiful master who kept
him pampered, and he slept on soft hay and cushions, not on wooden
beds with cockroaches for company.

And the longer
he was out, the less intrusive people’s stares seemed. Most
passersby gave him a moment’s glance before carrying on with their
own business. Back in London, the police would have stopped him and
a crowd of onlookers gathered with stones in their hands, but that
wouldn’t happen here. No one would dare lay a hand on Erik of the
Dal family, the feared Bluefinger, nor on his property. With a man
like that as his master, Reuben held his head high. Suddenly
everything that he'd been taught about walking and how to react to
particular pulls on the reins made sense. It was much better than
to have Erik screaming orders from behind. He couldn’t wait to show
off how good he was at it, how well he remembered everything he
needed.

A swift, but
gentle pat of the riding crop to the side of his buttock was a
signal to start running, and the pull on the reins to the left was
all he needed to know. With his vision tunneled by the mask as if
he had blinders on, his focus was better than ever. This was work
he wanted to excel at. He didn’t run straight away, cautious about
the cart. Showing off was one thing but the risk of tipping Erik
into the dirt was one he wasn’t willing to take.

But once he
settled into the new situation, he didn’t need any further
suggestions and walked ahead through the streets that now seemed
far busier than he remembered from that one time when he'd watched
Bylondon from a cage. Sun gave the streets a warm glow, even if
smoke and dust from London floated in the air. Back in the slums
where Reuben had lived with his father, sunshine never managed to
reach through the tall buildings built one over another. Even the
mud was drying up quick, so with each crossing he walked faster,
eager to please his master.

When he was
once more patted with the crop, his fast walk turned into a steady
run, and it didn’t matter anymore that he was shackled, wearing a
horse mask, and another man's property. He was free. The filtered
air coming through his mask filled his lungs with every deep breath
he took as he worked hard to keep a steady pace. If he ran too
fast, he risked tiring and failing Erik.

Erik pulled the
reins to the right, and Reuben immediately made a soft turn in that
direction, trotting into what appeared to be a market street. Even
through the mask he could hear muffled shouts of merchants praising
whatever it was they were selling. Erik pulled at the reins ,
giving Reuben a silent order to slow down.

The fact that
he didn’t hear voices very well made Reuben calm, and all he
focused on were the pulls and pats he'd practiced so many times
before. He was in a world of his own, and the only sensations that
mattered were ones Erik bestowed on him. Encased in soft leather,
Reuben wasn’t just a slave anymore—weak and vulnerable. He was
walking proud, untouchable thanks to Erik’s authority. No one would
call him a carrot top or a red rat with his master’s grace shining
down upon him.

The Trouble With Bodyguards: Part 1 by Kristina Blake
Through the Window by Diane Fanning
Wild Justice by Phillip Margolin
Desperado by Sandra Hill
Sinners Circle by Sims, Karina
Captivated (An Affliction Novel) by Raven
Reel Trouble: Wild Women of Alaska by Helmer, Tiffinie
The Wanigan by Gloria Whelan
The Awakening: A Witch-Vampire Romance: Feel the Heat. by Renee, Anastasha
Six Masters Island - The Cinderella Syndrome by Candace Smith