The Corpse in Oozak's Pond 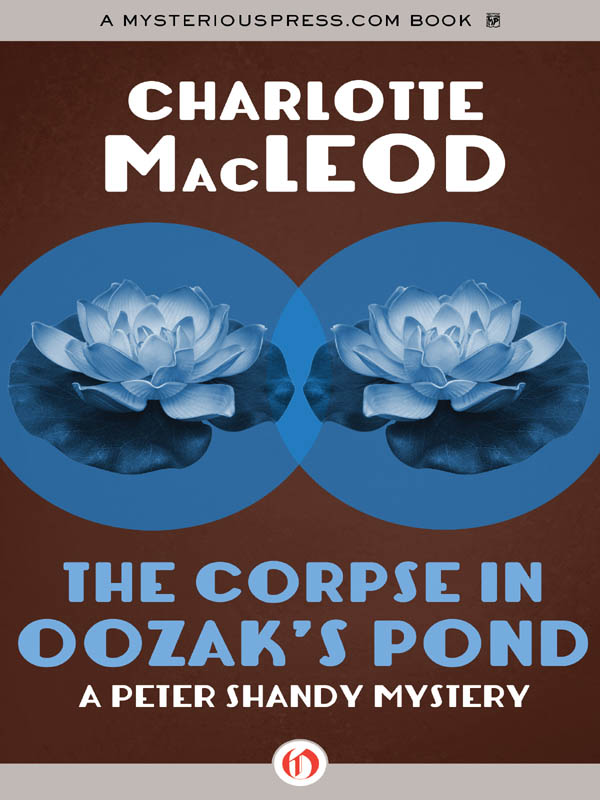 For Jean and Lou Steinberg

“‘Oh, fell the deed and foul the play When he whose eye so fond

Had erst beheld the gladsome day Turned up in Oozak’s Pond.’”

P
ETER SHANDY, PROFESSOR OF
agronomy at Balaclava Agricultural College and aficionado of verse trying to pass itself off as poetry, rolled out the lines with unctuous fervor. Helen Shandy, curator of the Buggins Collection, sneezed as she opened yet another bundle of the Corydon Buggins Archive. “Peter, darling, must you?”

“What do you mean, must I? Can’t you appreciate the ineluctable god-awfulness of it? Listen:

“‘Tho’ bravely did he struggle till

The waters closed him o’er,

“Since when was any Buggins ever named Gus?”

“Augustus Caesar Buggins, 1856-1904,” Helen replied, sneezing again. “Oozak’s Pond is nonsense, of course. There’s no such place and never was.”

“Fine words, forsooth! Here you are enjoying its benefits as you deny its very existence. Oozak’s Pond, my love, is that oversize puddle up above the methane plant whence cometh the water that turns the wheel that drives the shaft that squashes the ordure that releases the gas that lights the lamps at our august seat of learning, not to mention that lamp you’re sneezing at right now.”

The lamp was a nice old brass one. Helen gave its green glass shade a little pat of apology. “So that’s a pond? I thought it was some kind of man-made reservoir. Ponds don’t usually come with concrete rims, do they?”

“Oozak’s didn’t have one back when Balaclava Buggins’s first freshman class led the college kine to slurp from its mossy banks.”

“I thought they slurped from that other pond over by the animal husbandry department.”

“Nay, my fair. That’s where they slurp nowadays, when the mood is upon them and the pond isn’t frozen over. That, however, is not the primal slurping ground. In fact, it’s where our founder’s wife used to do the students’ wash.”

“Precisely. Mrs. Buggins’s name was Nausicaa. Pronounced, no doubt, Nawsicker. The old cowsheds were where the methane plant is now. There used to be a conduit made from hollow logs running down from the pond to fill the drinking troughs for those cows who didn’t care to make the climb to the pond. Legend has it that while cleaning out the trough one day, young Dalbert Buggins conceived the notion of harnessing the water power from Oozak’s Pond to run a gristmill. At one time, Oozak’s Pond ground all the college flour. As time went on and technology became more complex, the mill became the power plant, but Oozak’s Pond still burbles on in the same old way.”

“Dalbert.” Helen studied her still incomplete genealogy chart. “I have him. He was Balaclava’s nephew—not his son as is popularly supposed. Balaclava’s only son, Huxford, was killed in the Civil War.”

“Yes, and Huxford’s cousin Corydon almost brast a gut trying to think up a rhyme for Chickamauga so he could pen the memorial ode. Speaking of the Buggins bard and his odes, where was I?”

“Somewhere odious, no doubt. Shouldn’t we just be resting quietly so we’ll be fresh for the Groundhog Day ceremony tomorrow morning? I hope the little beast will have the decency not to see his shadow this time. Last year he gave us an extra six weeks of winter.”

Helen sneezed again with scholarly resignation. After all, she’d brought this dust upon herself. Six months ago, she’d presented a paper on Corydon Buggins’s brother Belial at a symposium in Arizona. The stir she’d created in academic circles had spurred President Thorkjeld Svenson to demand from her a definitive history of Balaclava and all the attendant Bugginses.

They’d been a family of writers and savers. She had plenty of material to work with; her trouble came in getting down to it. As a member of the college library staff, she was still subject to constant interruption from Librarian Philip Porble and his minions. Helen had quit trying to work in the Buggins Room and begun lugging armloads of ana back to the small brick house on the Crescent below the campus that she shared with Shandy and their cat, Jane Austen.

This had necessitated turning the upstairs guest room into a sort of den-cum-office. The downstairs cubbyhole Shandy had been using for grading papers and suchlike ever since his bachelor days was really too small for one, let alone two; although neither of the Shandys was a large person. They’d talked of building on an additional room, but February was no time, to begin tearing down walls. February wasn’t a propitious time for much of anything in Balaclava County, Massachusetts. That was why Groundhog Day, February 2, had grown to loom so large on the college calendar.

Naturally, President Svenson wasn’t going to accept any secondhand prognostication from Punxsatawney Pete or Cochituate Chuck. Balaclava Beauregard was already snoozing in the wings, or, more properly, in a hole up on the bank of what Helen now knew to be Oozak’s Pond. On the dot of half past six the next morning, the grumpy woodchuck would be hauled out of his snug den and set on a platform of snow that had been stamped down hard for his meteorological convenience.

Truth to tell, Beauregard probably wouldn’t see his shadow no matter what the weather because he wouldn’t bother to open his eyes, woodchucks being among the most determined hibernators of all Mammalia. That didn’t amount to a hill of beans. The entire student body, most of the faculty, their families, and a goodly number of townsfolk would be on hand to help him look for it.

Once the Official Groundhog Shadow Viewer had examined the evidence and pronounced the prognostication, Beauregard would go back to bed. A bonfire would be lighted; hot cocoa and crullers would be dispensed to the cheering multitudes from a big sled drawn by four magnificent Balaclava Blacks. The horses, well blanketed against the chill, would be stamping and snorting, jingling their harness bells, and having a bait of oats so they wouldn’t feel left out and no misguided freshman would start feeding them crullers in defiance of the strict dietary rules for college livestock set down by Professor Daniel Stott of the animal husbandry department.

As for the students, of course, they’d eat everything in sight and thrive on it. They’d sing college songs and stage snowball fights, then they’d roll up great masses of snow to build an effigy of Old Man Winter. Finally, they’d topple the snowman into the bonfire, the fire would go out, and the fun would be over. The horses would pull the sled back to the barn; the students would run after to boost it over the ruts, then they’d scatter to classes and another day’s work.

A silly business, no doubt, but Shandy wouldn’t have missed it for anything. Nor would Helen. She’d been promised a place of honor on the sled, helping her dear friend Iduna Stott pass out the crullers. She smiled over at her husband, who was still gloating over Corydon’s ineffably ghastly versification.

“Read me some more, darling. You might as well toughen me up. There’s reams of the stuff, and I suppose I’ll have to plow through it all sooner or later.”

Shandy was happy to oblige:

“ ‘Long did they seek our Gussie

With his pockets full of rocks?

Long time he lay until at last

Yet still his corse was holden fast—

By the rocks within his coat.

That caused him to sink;

Chewed by an otter, some folk say,

Though perchance it was a mink.’”

“Perchance we need a drink.” Helen pushed aside her papers. “Scotch or sherry, dear?”

“Scotch, since you’re kind enough to suggest it. Unless you’d like me to do the honors?”

“No, sit still. My nose needs a rest from all that dust. Why don’t you finish the poem and give me a brief synopsis when I come back?”

“I thought you wanted to get toughened up.”

“How tough do you want me to be, for goodness’ sake? Corydon does tend to go on, you know.”

He did, and Shandy relished every staggering metric foot, especially when he got to the stanzas in which Corydon proved beyond question that Augustus had not hurled himself into Oozak’s Pond in a fit of depression brought on by reading the collected works of Felicia D. Hemans, as had been conjectured. He had, in fact, been stabbed in the back with a butcher knife and weighted down with two stone balls off the ornamental gateposts in front of a house until recently occupied by a mysterious stranger calling himself Henry J. Doe. Mr. Doe and Mr. Buggins had had a falling-out over the sale of a horse. It was considered significant that Mr. Doe and the horse had both vanished during that same direful night when Augustus failed for the first time in many years of happy wedlock to return to the waiting arms of his justly fearful wife. Corydon wound up with a pious postlude:

For preyful man should gain no boon

From e’er a horse he steals.

And may Repentance, clad in white,

And may he rue both day and night

“Corydon really struggled over that line,” said Helen returning with the drinks to hear Shandy still reading aloud. “In my opinion, he lost. Is that all, I hope?”

“We’re galloping down the homestretch,” Shandy reassured her. “Just listen to this:

“ ‘For Gus is mourned by friend and brother

And also by his aged mother.

Tho’ waterlogged in death, may he

While still we dwell with mem’ry fond

Upon the corpse in Oozak’s pond.’ ”

“Catchy,” said Helen, “winding up with a couple of couplets. I must make a note. Do you suppose Augustus’s ghost ever went sloshing around the pond afterward?”

“Oh, no question about it. I’ll bet you dollars to doughnuts Corydon wrote another poem about the squelching specter. “

Helen sighed. “I’m afraid you may be right. Well, let’s hope Augustus doesn’t take a notion to show up tomorrow. You know what a stickler Sieglinde Svenson is for the proprieties. Our dear president’s wife wouldn’t consider a shade who’d got his mortal coil shuffled off in a fight over a horse trade an edifying influence on the future farmers of Balaclava County.”

T
HE SHANDYS WERE USED
to early rising; nevertheless, it took a certain amount of fortitude to haul themselves out of bed at half past five the next morning. The room was still almost dark when Shandy pulled the curtains aside.

“Flurrying a little,” he reported. “That’s good. Too overcast for Beauregard to see his shadow and not stormy enough to spoil the fun.”

“Provided the snow doesn’t make the crullers soggy.” Helen was fishing her thermal underwear out of a dresser drawer. “I get to ride on the sled, you know. The bottom’s going to be filled with straw for insulation, thank goodness. Iduna, Mrs. Mouzouka, and I are being picked up at the college dining room, along with the urns and baskets, so I’m afraid you’ll have to find yourself another woman.”

Slint&#39;s Spiderland by Tennent, Scott
Ice Cold by Tess Gerritsen
Raymie Nightingale by Kate DiCamillo
Deceive 2 (Book 2 of the Deceive series) by Karessa Mann
Shatterproof by Jocelyn Shipley
Guys Like Me by Dominique Fabre
What the Outlaw Craves by Samantha Leal
Saved by the Single Dad by Annie Claydon
Catch Your Death by Voss, Louise, Edwards, Mark
The Secret: Irin Chronicles Book Three by Elizabeth Hunter