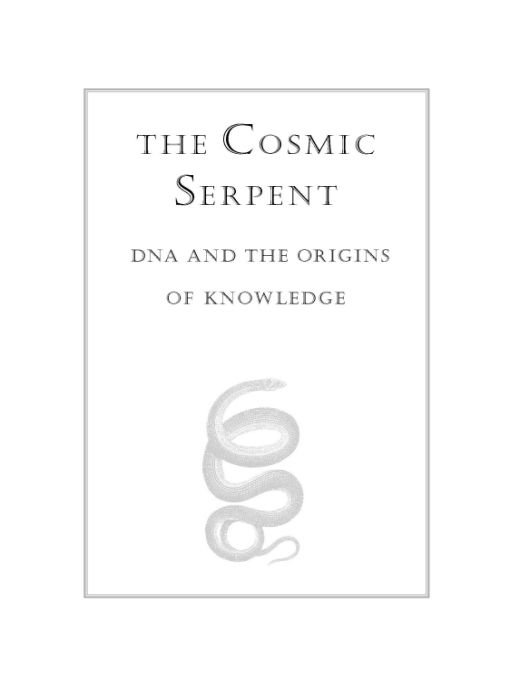 Table of Contents
Title Page
Copyright Page
Dedication
Â
Chapter 1 - FOREST TELEVISION
Chapter 2 - ANTHROPOLOGISTS AND SHAMANS
Chapter 3 - THE MOTHER OF THE MOTHER OF TOBACCO IS A SNAKE
Chapter 4 - ENIGMA IN RIO
Chapter 5 - DEFOCALIZING
Chapter 6 - SEEING CORRESPONDENCES
Chapter 7 - MYTHS AND MOLECULES
Chapter 8 - THROUGH THE EYES OF AN ANT
Chapter 9 - RECEPTORS AND TRANSMITTERS
Chapter 10 - BIOLOGY'S BLIND SPOT
Chapter 11 - “WHAT TOOK YOU SO LONG?”
Â
NOTES
BIBLIOGRAPHY
Acknowledgements
PERMISSIONS AND CREDITS
INDEX
BIBLIOGRAPHIC INDEX
ABOUT THE AUTHOR
Praise for
THE COSMIC SERPENT
The Cosmic Serpent
reads more like a mystery novel than a standard anthropological study. I was particularly impressed by the honesty of the account, the cross-disciplinary nature of the argument, and the courage and reasoned conviction with which the author makes his argument.
Much is written lately about “indigenous knowledge,” especially in the field of traditional plant and medical knowledge. The vast number of indigenous societies in the Amazon region have received much fame recently in this area because of their knowledge and use of hallucinogenic materials. Modern pharmaceutical companies are especially interested in this knowledge, and many indigenous leaders and organizations have spoken about the need to protect their intellectual and cultural property rights, as well as to capture some of the economic benefits of such knowledge.
Jeremy Narby's book places the discussion of indigenous knowledge in a deeper philosophical and cosmological framework, arguing for an epistemic correspondence between the knowledge of Amazonian shamans and modern biologists. The argument which Narby makes mines and reinterprets many of the sources in anthropology and biology on the subject. Some may argue that what Narby has found is mere chance or metaphoric correspondence, while others will appreciate the subtleties and truth value of the argument.
âShelton H. Davis, Senior Sociologist World Bank
Â
There is superstition in avoiding superstition, as Bacon once remarked, and I honor Jeremy Narby for finding his way through the numerous thickets that scientific reason has left behind in its attempts to turn plain truths of experience into the superstition it avoids.
The Cosmic Serpent
deals with the visionary experience that comes from taking ayahuasca, and Mr. Narby finds the claim that a plant means what it looks like is no superstition but a fact of experience: moreover, that the images of snakes and ladders that accompany the experience refer not only to the appearance of the ayahuasca vine but to that of the DNA spiral. To affirm this likeness he marshals the evidence of molecular biology and leaves the reader with the stunning intimation that the ayahuascan view of the world is none other than the scientific view seen from another perspective, that of selfhood rather than of no self at all.
Self is one topic that science is always superstitiously avoiding, and its biological origin has been called a veritable enigma. Narby's book is a most intriguing and informative essay in restoring self to its proper place in the scheme of things, and makes the enigma look more like an open secret. It confirms my belief that the new paradigm we have come to expect will have the heart of the old one to give it life, and I see the book's cosmic serpent as the herald of this wonderful moment.
âFrancis Huxley, social anthropologist Author of
The Way of the Sacred
JEREMY NARBY
Jeremy P. Tarcher / Putnam
a member of Penguin Putnam Inc.
New York 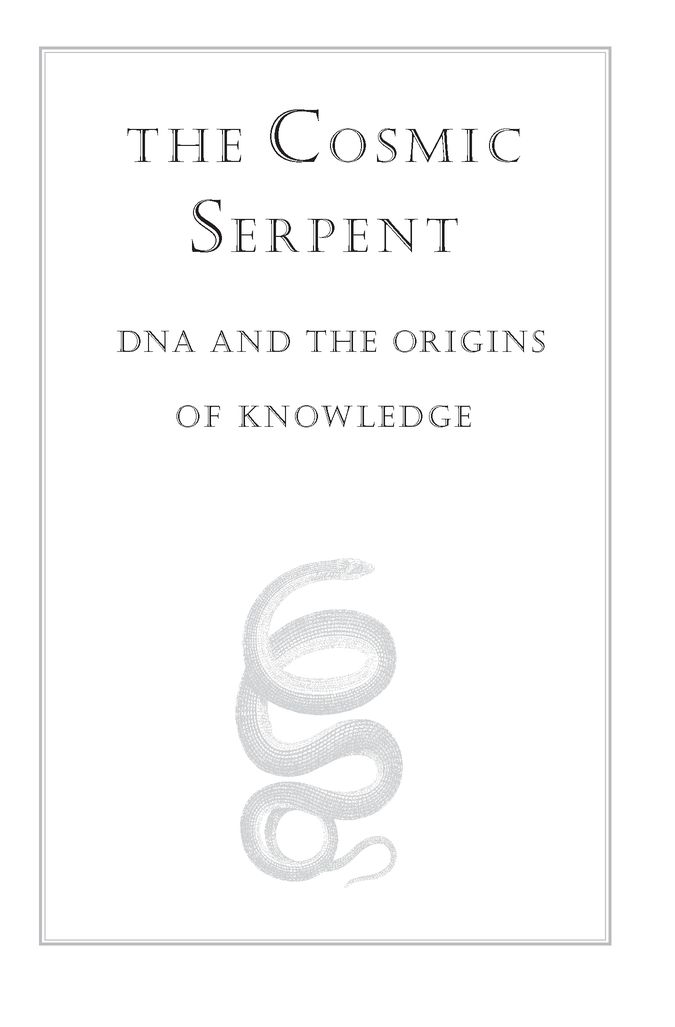 THOSE
WHO
LOVE
WISDOM
MUST
INVESTIGATE
MANY
THINGS.
Â
Â
HERACLITUS
To
Rachel, Arthur,
LoÃ¯k, and Gaspar
Chapter 1
FOREST TELEVISION

The first time an Ashaninca man told me that he had learned the medicinal properties of plants by drinking a hallucinogenic brew, I thought he was joking. We were in the forest squatting next to a bush whose leaves, he claimed, could cure the bite of a deadly snake. “One learns these things by drinking ayahuasca,” he said. But he was not smiling.
It was early 1985, in the community of Quirishari in the Peruvian Amazon's Pichis Valley. I was twenty-five years old and starting a two-year period of fieldwork to obtain a doctorate in anthropology from Stanford University. My training had led me to expect that people would tell tall stories. I thought my job as an anthropologist was to discover what they really thought, like some kind of private detective.
During my research on Ashaninca ecology, people in Quirishari regularly mentioned the hallucinatory world of
ayahuasqueros,
or shamans. In conversations about plants, animals, land, or the forest, they would refer to ayahuasqueros as the source of knowledge. Each time, I would ask myself what they really meant when they said this.
I had read and enjoyed several books by Carlos Castaneda on the uses of hallucinogenic plants by a “Yaqui sorcerer.” But I knew that the anthropological profession had largely discredited Castaneda, accusing him of implausibility, plagiarism, and fabrication.
1
Though no one explicitly blamed him for getting too close to his subject matter, it seemed clear that a subjective consideration of indigenous hallucinogens could lead to problems within the profession. For me, in 1985, the ayahuasqueros' world represented a gray area that was taboo for the research I was conducting.
Furthermore, my investigation on Ashaninca resource use was not neutral. In the early 1980s, international development agencies were pouring hundreds of millions of dollars into the “development” of the Peruvian Amazon. This consisted of confiscating indigenous territories and turning them over to market-oriented individuals, who would then develop the “jungle” by replacing it with cow pastures. Experts justified these colonization and deforestation projects by saying that Indians didn't know how to use their lands rationally.
2
I wanted to argue the contrary by doing an economic, cultural, and political analysis showing the
rational
nature of Ashaninca resource use. To emphasize the hallucinatory origin of Ashaninca ecological knowledge would have been counterproductive to the main argument underlying my research.
After two months in the field, I experienced an unexpected setback. I had left Quirishari for ten days to renew my visa in Lima. On returning to the community I was met with indifference. The following day, during an informal meeting in front of the house I was staying in, people asked whether it was true that I was going to return to my country to become a doctor. The question surprised me, as I usually described my future profession as “anthropologist,” rather than “doctor,” to avoid any confusion with “medical practitioner.” It turned out that several employees of the government's development project, the Pichis-Palcazu Special Project, had come to Quirishari in my absence and inquired about my activities. In answer the people showed them my file containing samples of medicinal plants. The project employees then scolded the inhabitants of Quirishari for being naive Indiansâdid they not realize that I was going to become a doctor and make a fortune with their plants?
In fact I had been classifying these plants to show that the tropical forest, which seemed “unused” to the experts flying over it in airplanes, represented a pharmacy for the Ashaninca, among other things. I had explained this to the inhabitants of Quirishari at the beginning of my stay. However, I knew that any further explanation would only confirm their suspicions, as I was truly going to become a “doctor.” I therefore proposed to put an immediate stop to the collection of medicinal plants and to entrust the contentious file to the community's primary school. This settled the matter and dissipated the tension in the airâbut it also removed one of the empirical bases on which I had been hoping to build a thesis demonstrating the rational nature of Ashaninca resource use.
After four months of fieldwork I left Quirishari to visit the neighboring community of Cajonari, a seven-mile walk through the forest. The inhabitants of Cajonari had let it be known that it was not fair for Quirishari to have the exclusive monopoly on the anthropologist who was giving “accounting” classes. These were actually informal arithmetic lessons that I had started to teach at the community's request.
People in Cajonari gave me a warm welcome. We spent several evenings telling stories, singing for my tape recorder, and drinking manioc beer, a milky liquid that tastes like cold, fermented potato soup. During the day we did arithmetic, worked in the gardens, or listened to the songs taped the previous evening. Everyone wanted to listen to their own performance.
One evening in front of a house half a dozen men and I were drinking manioc beer and chatting in the twilight. The conversation veered to the question of “development,” a daily subject in the valley since the arrival of the Pichis-Palcazu Special Project and its $86 million budget. In general the Ashaninca expressed frustration, because they were continually being told that they did not know how to produce for a market, whereas their gardens were full of potential products and everyone dreamed of making a little money.
ADS
15.4Mb size Format: txt, pdf, ePub