Read The Cost of Happiness: A Contemporary Romance Online

The Cost of Happiness: A Contemporary Romance 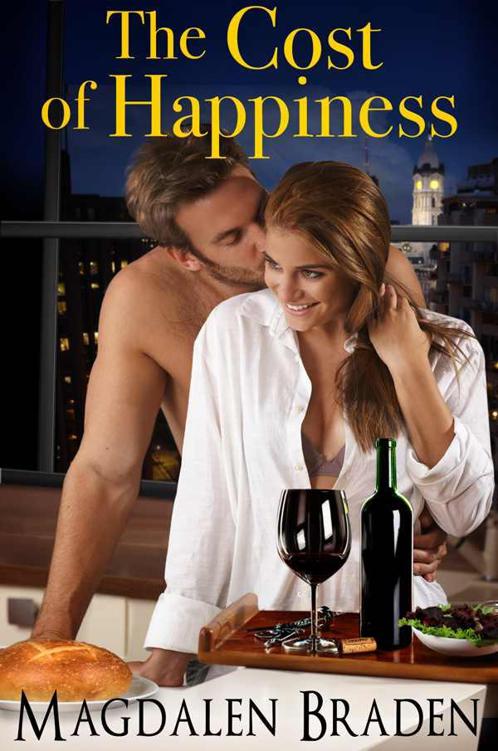 
The Cost of Happiness

Copyright © 2013 Magdalen Braden. All Rights Reserved.
Published by Harmony Road Press
www.harmonyroad.com
Version created Fri Dec 6 09:46:58 2013
ISBN-10: 0984909796
ISBN-13: 978-0-9849097-9-7
Cover by Laura Morrigan
http://www.lauramorrigan.com/
This ebook is licensed for your personal enjoyment only. This ebook may not be re-sold or given away to other people. If you would like to share this book with another person, please purchase an additional copy for each person. If you're reading this book and did not purchase it, or it was not purchased for your use only, then please return to harmonyroad.com and purchase your own copy. Thank you for respecting the hard work of this author.
This is a work of fiction. All characters appearing in this story are fictitious and any resemblance to real persons, living or dead, is purely coincidental.

Meghan Mattson has just started her summer associate job at Fergusson & Leith, Philly’s number two law firm, when she learns that her bipolar mother has been scamming homeowners…in Meghan’s name. Worse, the Feds want to convict Meghan too. She convinces them to drop the charges, but her agreement to pay the restitution forces Meghan to work as a paralegal for Fergusson’s Complex Litigation Group.

Enticed by the prospect of heading Fergusson’s Complex Lit team, Dan Howard quits the US Attorney’s office. His first day at the firm, he learns he’s ended up with Meghan, Franklin Law’s star student, as his paralegal. He’s thrilled to work with such a brilliant mind…and such an attractive woman.

As Dan and Meghan tackle a tricky case for a new client, they discover it’s hard to resist their mutual attraction. Even if they don’t get in trouble with senior partner Wallace Leith, others would love to see them fail. Can Dan and Meghan afford their fairy-tale happy ending? Or are some things too costly to keep…

The judge in the middle is really cute
.

Where had that come from? Almost two years of law school, and
now
she notices that a guy is cute? Five minutes before competing for a place on the official Franklin Law Moot Court Team, the culmination of weeks working on her brief and polishing her oral argument? Seriously—now?

Meghan looked around to make sure she hadn’t said that out loud. Her opponent, Libby Pembroke, was intent on organizing her notes for the oral argument. The third-year law students—the ones who actually decided which competitors would make the team to compete for the coveted Franklin Cup—were chatting at the back of the room.

Meghan glanced back at the judges. Yup, the one in the middle was relatively young, maybe early thirties, and very good-looking. Bright blue eyes, light brown hair, and a killer smile. And he was looking straight at her.

She hastily consulted her pad even though she’d memorized and practiced everything. In fact, the only note on the top sheet was an exhortation to “make eye contact with the judges.”

Well, she could cross off that step. Her cheeks were glowing as a result of eye contact.

One of the third-years stepped to the front of the moot court room and introduced the panel of judges. Meghan ignored the other two—an alumna and a local patent lawyer. The man in the middle, Daniel Howard, was an Assistant US Attorney. Which meant Libby had to know him. Her uncle was Blackjack McIntyre, the US Attorney. In effect, the cute judge’s boss.

Meghan wiped her damp palms along the skirt of her navy suit. Okay, so maybe that gave Libby an advantage, but Meghan didn’t have to beat her. They could both do great jobs and end up on the final moot court team.

The third-year student gave them the signal to begin. Meghan walked to the lectern, looked directly at the judges at each end, and began. “May it please the Court, my name is Meghan Mattson. I represent the Petitioner.”

Her gaze slid instinctively to Daniel Howard. She returned his smile, then began her argument.

Dan thoroughly enjoyed the oral arguments, but then he’d guessed he would. The written briefs had been top-notch, which hadn’t been a surprise in Libby’s case. He’d known her for years. Like her twin, Lissa, Jack’s niece was smart and funny, especially when deflecting Jack’s brazen efforts to get her to join the public sector after graduation.

What shocked Dan was how much better the other brief had been. Meghan Mattson. In oral argument, she’d been calm and quiet. When the judges started to ask questions—okay, when Dan had hammered her with questions—she’d lit up like fireworks over Penn’s Landing. Hard to take his eyes off her, even when it was Libby’s turn. As good as Libby was, Meghan had been outstanding. He wished Philadelphia’s criminal lawyers were half as good, if only so he’d be challenged more in his prosecutions.

After Dan announced the court’s decision in favor of the Petitioner, he exchanged pleasantries with the other judges, ducked the officious third-year running the show, and walked over to say hi to Libby. Only polite to say hello. Pure coincidence that she was talking with Meghan. He ignored Libby’s affectionate scowl about her loss. At least no one could accuse him of favoring his boss’s niece.

“Great job,” he told them. “It was a tough decision. Both your briefs were excellent.”

“And nepotism did me no good.” Libby shrugged, then lifted her hand, palm up, toward the other woman. “Dan, this is Meghan Mattson. I was counting on her being too quiet for effective oral advocacy, but clearly I was wrong.” She turned to Meghan. “Dan’s waiting for my uncle to run for public office so he can become the US Attorney.”

Meghan’s smile was softer than the one she’d used during oral arguments. She had gorgeous eyes with long, dark eyelashes. On anyone else, the way she looked at him—her eyes lowered so she peered at him from beneath those killer lashes—would be flirtatious. Dan suspected Meghan was genuinely shy.

He hardly noticed when Libby slipped away. “I particularly liked your James Madison reference. I may have to steal that.”

“I told Libby I got it from Wikipedia.”

Dan laughed. “Are you considering appellate practice when you graduate? You should. That was a great oral argument.”

Meghan looked down at her hands, clasped around a beat-up backpack. “I’m kind of focused on doing well in my second-year exams. Corporations, for example. Not my favorite class.”

“Just remember—if you get stuck, cite tax advantages as a reason for anything corporations might do.” He made air quotes around the words “tax advantages.”

She laughed at him, her face lit with joy. “I like that.” She sobered. “I suspect I need to know more than tax reasons, though.”

He rolled his eyes. “Well, if you insist, you can actually study for the exam.” He grinned. “Where are you working this summer?”

“Good firm.” Interesting. Just last week, Wally Leith had asked Dan out to lunch without saying why. Dan assumed the firm wanted him to join their criminal defense practice, which is why he hadn’t yet accepted Wally’s invitation. Still, if the firm hired summer associates like Meghan, it wouldn’t hurt to let the senior partner buy him a meal.

Suddenly, the organizers snagged Dan for the next round of oral arguments. He turned back to Meghan. “Maybe I’ll see you later?”

She blushed at his smile but didn’t say anything.

There was a reception after the competition. The self-important third-year who’d been assigned to show Dan around chatted his ear off as they walked through to the atrium where a massive globe dominated the space. “Isn’t that Ted Dorchay?” Dan asked. Before he could get an answer, Dan thanked the guy and raced off to catch the assistant dean.

“Hey, Dan. You were a judge?” Ted’s smile broadened at Dan’s approach.

“Semi-finals. Libby Pembroke, whom I knew already, versus Meghan Mattson—?” Dan let his voice trail off, the question implicit.

As the assistant dean for students, Ted was like a proud grandparent ready to boast. “As good as Libby is, I’m guessing Meghan won, right?”

Dan made an elaborately non-committal shrug. “We don’t get to vote on who should make the team, so I can’t say. Our panel sided with her on the case. Her brief was first class, and I’d say her oral argument was the strongest I heard.”

“Really?” Dan was stunned. Franklin Law was a top-ten law school, but most clerkships on the high court went to Yale or Harvard grads.

“The Dean hopes so. Meghan’s grades are breaking school records. The faculty has encouraged her to apply for the right district court clerkship, and the chief judge of the Second Circuit has expressed interest in her.”

“Hunh.” Dan spotted Meghan chatting with Libby. Meghan’s warm brown hair glinted under the lights. When she turned slightly, he could see that a curl had come loose and was tickling her neck.

Ted chuckled, a sound Dan barely heard. Ted slapped him on the shoulder. “Good to see you, Dan.”

Dan met Ted’s mocking smile with a sheepish shrug. They shook hands and Ted moved along to the next group. When Dan looked over his shoulder, Meghan was gone.

It was then he realized he’d been planning to ask her out.

“Couldn’t give my niece the win?”

Dan looked up at Jack McIntyre, lounging in the doorway to Dan’s office. “Trust me, she was great. The other student was better.”

Carolyn G. Hart_Henrie O_05 by Death on the River Walk
Bitter Chocolate by Carol Off
The McClane Apocalypse: Book One by Kate Morris
One Bad Day (One Day) by Hart, Edie
Duchess of Sin by Laurel McKee
Violet (The Silver Series Book 4) by Cheree Alsop
Finding Midnight by T. Lynne Tolles
Dustin's Gamble by Ranger, J. J.
Keeping Time: A Novel by Mcglynn, Stacey
The Impossible Clue by Sarah Rubin