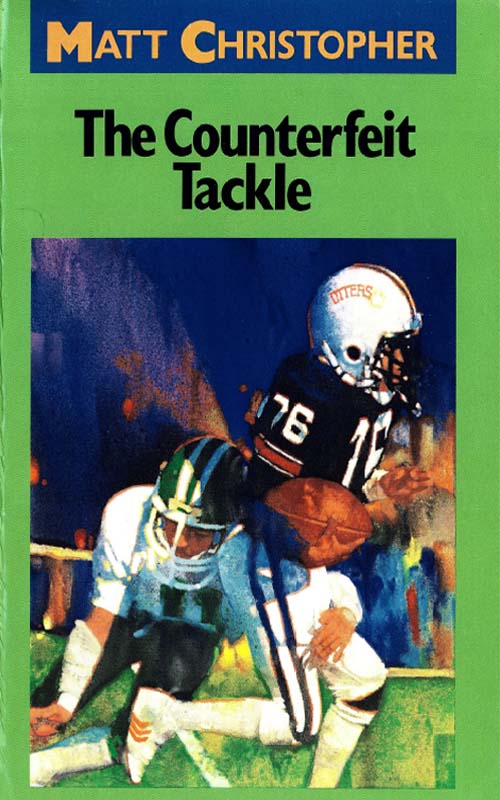 How many of these Matt Christopher sports classics have you read?

B
UZZ stepped into the house and closed the door against the bitter cold air. His cheeks were apple-red. His glasses were clouding
over so that he couldn’t see a thing.

He put the sack of groceries on the table, took off his glasses and set them on the shelf beside the kitchen sink.

He turned and looked at his twin brother Corky. The two of them looked exactly alike except that Buzz was nearsighted and
had to wear glasses.

Corky was sitting at the kitchen table, his chin cupped in his hands. If he wasn’t sick, his thoughts were a million miles
away. He mumbled something that sounded like “Yuh.”

“Okay, keep it a secret,” said Buzz. “I don’t want to know your troubles, anyway.”

He took off his cap and coat. It was Saturday, the last day of September, and it sure had gotten cold all of a sudden.

“Guess I’m to blame for this,” he said. “I bought three tickets for the Bears-Giants game from Ben Welsh, thinking that the three of us could go. But Corky feels he shouldn’t go.” 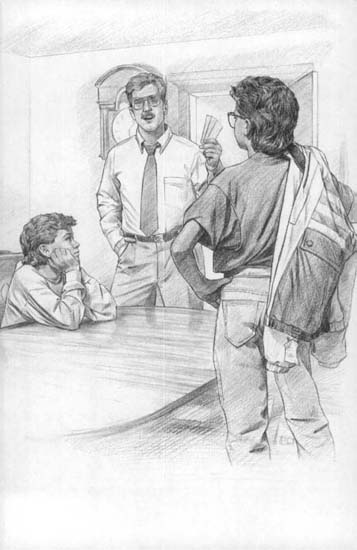 Buzz looked puzzledly from Dad to his brother. “Why not?”

“He thinks that if he doesn’t show up at the Marlins game tomorrow, Coach Hayes will boot him off the team.”

Buzz wrinkled his nose, a thing he always did whenever he heard something he didn’t like. “Boot him off the team for that?
I don’t think Mr. Hayes would do that. Do you, Dad?”

Corky lifted his face from his hands and shot piercing eyes at Buzz.

“Well, he would! You don’t know Coach Hayes the way I do! He’s tough. He doesn’t want anybody to get there late or to miss
a game. Just because I got there late last week he bawled me out.
He said that if I was late again I’d be benched. Imagine what he’d say if I didn’t get there at all tomorrow!”

Corky played right tackle on the Otters football team. The season had opened last week and the Otters had beaten the Dolphins
21 to 19.

Buzz hadn’t gone to the game. He had played basketball on his class team last year and was going to play again this year,
but he didn’t care for football. It seemed like just a lot of head-bashing to him.

Corky was different. He enjoyed football as well as basketball. He liked baseball, too. Buzz didn’t. Buzz would rather swim
and fish. And play chess. He was the school chess champion last year. That was a game he
really
liked.

“If I were you,” he said to Corky, “I’d
go to the game, anyway. I just bet you that Coach Hayes won’t boot you off the team.”

“But you’re not me,” said Corky, and cupped his chin into his hands again. “And you don’t know Coach Hayes.”

Dad looked at Buzz. “How about you, Buzz? Will you go with me?”

Buzz lifted his shoulders and stuffed his hands into his pockets. “Sure. I’ll go with you, Dad. But —” He paused.

“Well, Dougie was going to come over tomorrow. We were going to watch television for a while, then play chess. Wouldn’t —
wouldn’t Mom and Joan care about going with you?”

Joan was their seventeen-year-old sister, who was a cheerleader in high
school. Certainly she might enjoy going to the Bears-Giants game.

Dad took a deep breath and let it out heavily. “Well, I don’t know. If Corky plays tomorrow with the Otters, your mother probably
would rather see him play. Maybe Joan will go with me.”

He turned around just as Joan walked in from the other room. “Did I hear my name mentioned in vain?” she said, smiling.

“It all depends,” said Dad. He explained about the tickets and the problem with Corky. Then he asked her if she’d like to
go to the game.

Her brows shot up and her eyes opened wide. “Of course I’d like to go! And if neither of the twins wants to go, can I ask
Steve to come along?”

Steve Post was her latest heartthrob. Two weeks ago it was Terry Slocum. Next week or two weeks from now it could be anybody’s
guess who her heartthrob would be.

“I suppose so,” said Dad. “Buzz doesn’t care about it, and Corky doesn’t dare. I guess it’ll be you, Steve and I, then.”

All this went on and Corky never said a word. He just sat there with his chin in his hands and his eyes staring off into space.

Buzz knew that he wanted to go to that Giants-Bears game in the worst way. No one loved football as much as Corky did. He
was crazy about those professional football games on television. Now that he had a chance to see a real big-league game in
person, he couldn’t. And
just because he was afraid that Coach Hayes would kick him off the team.

Boy
, thought Buzz.
I wouldn’t be afraid. If I loved football the way Corky does
, I’d
go
.

This was the first time the two great teams had ever played in Kellsburg. It was a benefit game to raise money for a special
fund. It might be the last time they would play here.

Later on Buzz put on his cap and coat again and went to the library. The wind was blowing hard and there were snow flurries
in the air.

For several days Buzz had wanted to get a book or two on chess. He knew
how to play the game fairly well, but not as well as he wished. The only person he hadn’t beaten at school was Mr. Krum,
his math teacher. And that was his aim — to beat the pants off Mr. Krum. Although, of course, he wouldn’t tell it just that
way to Mr. Krum.

He found two books on chess which he thought would help him. While he was waiting for Ms. Larkin, the librarian, to stamp
his library card, a boy came up beside him.

It was Pete Nettles. He was smaller and younger than Buzz and a great buddy of Corky’s, a thing Buzz couldn’t understand.
Pete was the dumbest kid on the block. He had just passed last year by the skin of his teeth. Yet Corky liked him.

Pete blinked a few times and stepped back a little. “I — I just wanted to see him, that’s all.”

Pete’s dark eyes hung on to his a moment. Then Pete turned away and headed for the shelves where a label read
sports
.

Buzz smirked.
Sports. That kid would never be able to do anything
. Then he turned back and saw Ms. Larkin looking directly at him. It was a dark, unpleasant look — the kind Mom gave him when
he acted smart at home — and his face turned a bright red.

“Guess I shouldn’t have talked to him that way,” he murmured quietly.

“No, Buzz,” replied Ms. Larkin softly. “You shouldn’t have.”

Ms. Larkin placed his card in one of the books, then pushed them toward him.

“Thank you,” he said. He picked up the books and left.

It was snowing harder now. The flakes were like pinfeathers whipping about in the air. They hit his glasses, melted, and left
streaks. After a while they bothered him so that he had to take the glasses off.

“Hey, Corky, boy!” a voice shouted ahead of him. “Hope it stops snowing before our game tomorrow! Don’t you?”

Buzz saw two boys approaching — Gary O’Brien and Tony Krebbs, members of the Otters football team. They stopped and smiled
at him while the snow pelted their faces.

Buzz started to say something, but Gary was looking at the title of one of the books Buzz was carrying and he laughed.

“Hey, look at this, Tony! Corky’s going to read up on chess! You don’t expect to play chess like that smart brother of yours,
do you, Cork?”

Buzz’s heart skipped a beat. “I’m Buzz,” he said. “I took my glasses off because of the snow.” He pulled the glasses out of
his pocket to prove it.

G
ARY and Tony brushed past Buzz and went on their way, and Buzz went on his. Both of those boys were in his class in school.
But they often acted just that way, as if he had the measles or something.

They liked Corky. Everyone liked Corky. It wasn’t because he played football, either. Or basketball. Buzz played basketball
with some of those same guys. Still, it made no difference with them. They’d yell “Hi!” to Corky if they saw
him half a mile away. But Buzz would practically have to bump into them before they said “Hi” to him. It wasn’t the same
kind of “Hi,” either. It was dead-like.

Why they liked Corky and not him, Buzz didn’t know. He had one friend — Dougie Byrd. One friend — as long as he was a
real
friend — was enough for him.

He got to thinking about tomorrow’s pro football game. He sure wished Corky would go. It would be the greatest thing that
ever happened to him. He’d remember it as long as he lived. Who knew if he’d ever have this chance again?

And then, suddenly, an idea popped into Buzz’s head. A crazy, unbelievable, fantastic idea. But an idea that could work perfectly!

The more he thought about it, the better it looked, and the faster he hurried home.

He called Corky into the bedroom and shut the door. He was breathless with excitement.

“Corky, you still would like to go to the Giants-Bears game, wouldn’t you?”

“Wait! I have an idea. You
can
go. And you won’t have to worry about not playing with the Otters tomorrow, either!”

Corky stared. “Why? Did you talk with Coach Hayes?”

“No. I’ll play in your place. Without my glasses on no one will know that I’m Buzz! I’ll pretend I’m you!”

“Sh-h!” whispered Buzz. “Not so loud! No one must know about this. Not even Dad. This is only between you and me.”

“But you’ve only played football in gym!” Corky said, his voice just above a whisper. “How do you expect to do it?”

“Look, you play tackle, don’t you? All you do is stand there in the line and try to keep the opponents from running through.
What’s hard about that?”

“Everything’s hard about that,” snapped Corky. “You have to stand just right. You have to know how to block your man. Buzz,
you’re not in condition! You could get hurt!”

“I played basketball all last winter just as much as you did,” said Buzz. “And I rode my bike around this summer more often
than you played baseball. You’ve only been practicing football a few weeks. You can’t be in much better condition than I am.” 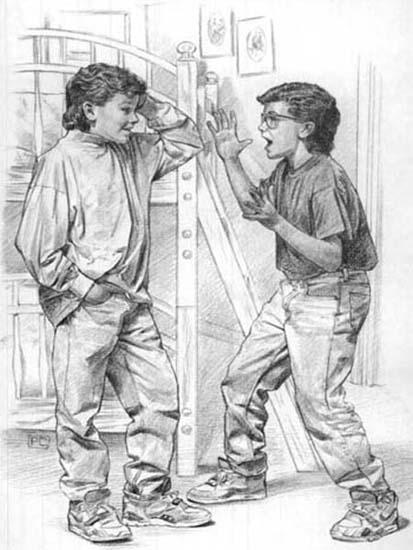 Outcast by Adrienne Kress
Saffire by Sigmund Brouwer
That Special Smile/Whittenburg by Karen Toller Whittenburg
Caught in the Storm by M. Stratton
Surrender Your Independence by Trinity Blacio
The Elephanta Suite by Paul Theroux
Bringing Up Bebe by Pamela Druckerman
Looking Backward from 2000 To 1887: A Utopian Classic! by Edward Bellamy
Explosive Adventures by Alexander McCall Smith
Pollyanna and the Greek Billionaire (Innocent and Betrayed, Part 2) by Marian Tee