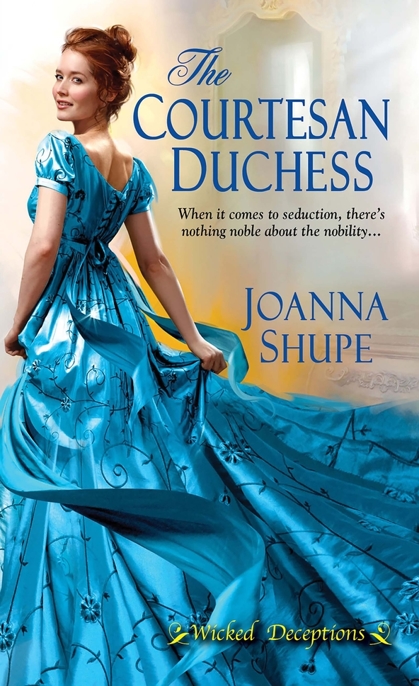 A LADY’S GUIDE TO SEDUCING HER LORD
“How long will it take to get there?” she asked.
“More than an hour. Torcello is the farthest lagoon island from Venice. It’s also the quietest. Only a small number of people actually live there.”
“What shall we do until we arrive?” She slid him a glance from beneath her lashes, and Nick felt his blood begin to heat.
“Why, I’m not sure.” Turning, he nuzzled her neck just below her earlobe. He happened to know exactly how much she liked it.
She gave a long sigh, and her head fell back against the seat to allow him better access.
“What would
you
like to do until we get there?” he whispered against her throat.
“Shall we discuss politics? You haven’t taken up your seat in the House of Lords, but I’m sure—”
“I would rather swim to Torcello than discuss politics. I’m afraid you’ll have to do better than that, my dear.” He traced the curve of her collarbone with his fingertips, the skin so soft and delicate. She rewarded him with a shiver. Leaning in, he slid his lips down the column of her throat, dropping small kisses as he went. She smelled heavenly, like soap and flowers, and he thought about tasting her everywhere.
“Hmm,” she moaned. “No politics, then. What about gossip? I can tell you everything happening in London these days.”
He grunted and continued kissing her neck, and she laughed. “Shall I recite poetry for you?”
“I hate poetry,” he mumbled.
She laughed once more. “As it happens, so do I. Well, that leaves us only one thing.” Her hand found his thigh and began slowly gliding toward his crotch. His shaft already swelling, he held his breath, waiting for her sweet touch. “To talk about ourselves.”
Books by Joanna Shupe
The Courtesan Duchess
The Harlot Countess
The Lady Hellion
Published by Kensington Publishing Corporation
The C
OURTESAN
D
UCHESS
J
OANNA
S
HUPE

Sacrifice of the Septimus: Part 2 (Afterlife saga Book 7) by Stephanie Hudson
Three Light-Years: A Novel by Canobbio, Andrea
The Vestal Vanishes by Rosemary Rowe
Dimiter by William Peter Blatty
World of Ashes by Robinson, J.K.
Annie Burrows by Reforming the Viscount
The Knight and Knave of Swords by Fritz Leiber
Death in Paradise by Kate Flora
If I Trust You (If You Come Back To Me #4) by Beth Kery
The Breakup by Debra Kent