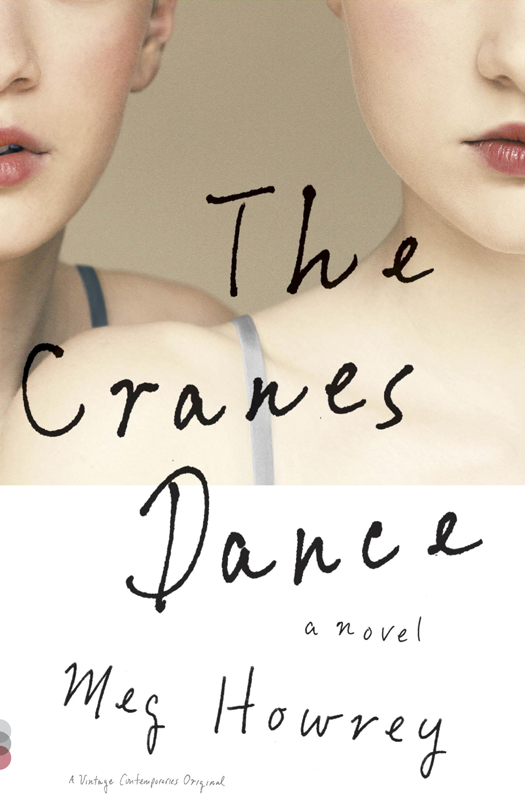 I threw my neck out in the middle of
Swan Lake
last night.
So begins the tale of Kate Crane, a soloist in a celebrated New York City ballet company who is struggling to keep her place in a very demanding world. At every turn she is haunted by her close relationship with her younger sister, Gwen, a fellow company dancer whose career quickly surpassed Kate's, but who has recently suffered a breakdown and returned home.
Alone for the first time in her life, Kate is anxious and full of guilt about the role she may have played in her sister's collapse. As we follow her on an insider tour of rehearsals, performances, and partners onstage and off, she confronts the tangle of love, jealousy, pride, and obsession that are beginning to fracture her own sanity. Funny, dark, intimate, and unflinchingly honest,
The Cranes Dance
is a book that pulls back the curtains to reveal the private lives of dancers and explores the complicated...

Meg Howrey was a professional dancer and actress.
She lives in Los Angeles.

All rights reserved. Published in the United States by Vintage Books, a division of Random House, Inc., New York, and in Canada by Random House of Canada Limited, Toronto.

Vintage is a registered trademark and Vintage Contemporaries and colophon are trademarks of Random House, Inc.

“You won’t make yourself a bit realler by crying,” Tweedledee remarked. “There’s nothing to cry about.”

“If I wasn’t real,” Alice said—half-laughing through her tears, it all seemed so ridiculous—“I shouldn’t be able to cry.”

“I hope you don’t suppose those are real tears?”
Tweedledum interrupted in a tone of great contempt
.

—LEWIS CARROLL,
Through the Looking-Glass

I threw my neck out in the middle of
Swan Lake
tonight. Act III, to be precise. Everything up to that point had been going pretty well.

I’ve danced
Swan Lake
a lot. Actually, it was the first ballet I ever did with the company. My parents and my sister Gwen flew in from Michigan for my debut. I remember trying to describe my stage position so they would know where I was in the flock.

“I’ll know which one you are,” Mom said. “I’ll be holding my breath the whole time. And probably squeezing your father’s hand off!”

“Actually, the collective noun for swans is a
wedge
of swans,” Dad said. “Although that’s used when they are flying in a V formation. Otherwise it might be a bevy of swans. Or a herd.”

“
Merde
,” said Gwen, because that is what dancers say to each other instead of “break a leg.” Some dancers say “
toi toi toi
,” which is kind of an opera thing. I’ve always thought that
was a little pretentious, but whatever works for you. The girl who had my dressing room before me was Jewish and she put up one of those mezuzah thingies on the doorway. She took it with her when she retired, but I still touch the strip of sticky tape that remains before going onstage. That isn’t about superstition, or religion. It’s about
ritual
. Well, maybe it’s about superstition because I did it the first time as a joke and that night I had a spectacular performance and so now I always do it.

I wasn’t having a
spectacular
night tonight, but it was
clean
. No real mistakes, everything neat and tidy. The first role of my evening—one of the four Big Swans in Act II—had gone well, despite Fumio dragging the tempi. That’s fine for Anne-Marie, who was dancing Odette and likes things slow, but tough on the rest of us, who had to stand still and cramp through solos that felt like the length of the Old Testament. For Act III I was dancing the Polish Princess. That’s a solo, and it’s fairly action-packed with pirouettes, but for some reason I find it less daunting than Big Swans. Maybe it’s the costume. For Big Swans I’m all in white: crisp feathered tutu, white tights, white pointe shoes, feathered headpiece. The whole thing just screams, “And now … SERIOUS BALLET: please be perfect.” Polish Princess gear has a knee-length skirt that hides a multitude of sins, and it’s all flounces and furbelows. Jaunty little headgear. I feel like as long as I keep up a general air of “I am so HUGELY PSYCHED to be POLISH!” and avoid actually falling on my ass, I’m in the clear.

It occurs to me that maybe you don’t know what
Swan Lake
is all about.
I haven’t assigned you a face or body, invisible audience member, let alone a background in the arts. Maybe you’ve
never seen
Swan Lake
. Maybe you’ve seen it and you still don’t really know what happened because you dropped your program under the seat in front of you and didn’t want to scramble around for it in an ungainly fashion.
Swan Lake
, like all the major classical ballets, really needs program notes because otherwise you have to follow the plot points in ballet mime, and god knows those are truly undecipherable.

You’re familiar with the music though, right? At the very least you’ve heard it in a TV commercial for like, Mop & Glo or something, and seen that line of linked dancers in white feathered tutus clip-clopping in pointe shoes across a sparkling floor? Dun-dun-dun-DUN-duddle dundundun, Dun-dun-dun-DUN—duddle dundundun. Tchaikovsky. I’m not being condescending. I try not to think about the fact that most people don’t ever go to the ballet, but I get that they don’t. I do get that.

So yes a synopsis might be in order, and if you know it already you can just nap for a bit. Most productions of
Swan Lake
don’t vary all that much from one another. There are one or two really funky versions out there, but those aren’t done by classical ballet companies. You can’t deviate too far in classical ballet or you’re no longer, well … classical. And it’s not like Shakespeare, where you can reset the whole thing in World War II, or a Mexican brothel, or something. Well you
could
, but the plotline won’t stand up under a whole lot of tinkering and we’ve got a subscription audience to satisfy. They want the
Swan Lake
they know and love, which by and large is the one that was done for the 1895 revival of the ballet by the choreographer Petipa and his ballet master, Ivanov. Sometimes an artistic director might change a few things or restage certain sections.
Like Marius—our current artistic director—added a Prelude to our version.

The curtain rises on a nearly empty stage, with a backdrop of a lake and some boulders Stage Left leading up to a cave. Enter a young girl. She is wearing white and her hair is mostly down, so we know right away she is Young and Innocent. The girl dances dreamily by herself and all seems peaceful enough until suddenly a shadowy sort of caped figure emerges from the cave. It is the evil magician Von Rothbart. We know he’s a magician because he’s got the cape, and that he’s evil because underneath the cape his costume is this demonic rubbery sort of thing that Roger refers to as “Mein Von Goblin Wear.” Von Rothbart makes some gestures and a fog starts rolling in and darkness descends. The girl appears to lose her way in the mist. She does the big “I’m lost!” gesture: one hand in front of the face, taking tentative steps forward, peering around, etc. Von Rothbart slithers down from his boulders and makes more magic gestures, luring the girl into his arms. He swirls his cape around her, turns, and walks upstage, the cape billowing out in such a way that the girl is able to slip into the hydraulic trap and be replaced with another girl, this one in full Swan regalia: the stiff white tutu with the feathered bodice and headpiece. This is Odette, the ballerina we’ll watch for the rest of the evening. The other one was a girl in the corps with a wig on to match the hair color of whoever is dancing Odette that night. It’s the old switcheroo. (Be amazed by this bit of stage magic, okay? It’s not like we can pull anything off with CGI.)

So Von Rothbart reveals this magically changed creature
and she beats her arms and tries to run away, but Von Rothbart is able to control her, and using more of his dastardly powers he summons onto stage two rows of women in white swan tutus who form a V and beat their arms in unison as the evil magician stands triumphant with the stricken Odette pressed against his Von Goblin Wear. Lights fall, curtain, end of Prelude.

The program notes will tell you that the evil magician has placed all these poor women under a curse and that they are condemned to be swans by day and women by night. Von Rothbart’s personal motivations for such malevolent behavior are not explained. You’re at the ballet. Deal with it.

Act I opens in the village green of an unspecified, vaguely German realm. We’re a little hazy on the time period too. It’s Days of Yore, I guess, in the yore when everyone in pseudo Germany wandered around their village green in nearly identical outfits. Ours have a slightly Renaissance Fair vibe to them, which I think is a mistake. The sleeves are too puffy and give all the girls man shoulders. Anyway, A Village Green Scene is standard issue for classical ballet, and if you’ve seen one circlet of peasant-dancing hoo-ha, you’ve seen them all. There’s a garland dance and a Maypole and a lot of people standing around fake clapping or pointing out to each other that other people are dancing in the middle of the stage. This kind of random milling about drives me NUTS, but honestly there just aren’t a lot of options. We can’t pretend like we’re talking to each other, because that would be weird and anti-ballet. We don’t have props or activities like you see in plays or the opera—that would take up stage space. So everyone just wanders around greeting each other with head nods if you’re a girl and shoulder thumping if you’re a guy, and then one person will indicate Center
Stage like “Hey, did you see? There are people dancing! Isn’t that neat!” And the other person will make a gesture like “Yes! Dancing. It is happening there!”