Read The Creatures of Man Online

The Creatures of Man 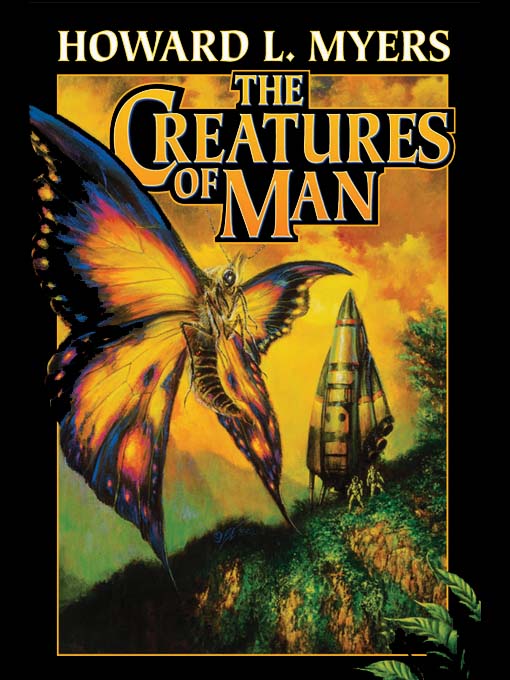 Howard L. Myers is almost completely forgotten today, although some people can still be found who remember the name "Verge Foray," under which he published many of his stories. But in the brief time his writing career lasted, from 1967 to 1971, he was a prominent figure in science fiction.

It's a sad tale. Myers was born in 1930, and published his first science fiction story at the age of twenty-two. That was "The Reluctant Weapon," published in the December 1952 issue of
Galaxy.
(The story is included in this volume.)

And . . . that was it, for another fifteen years. Why? We don't know. For whatever reasons, it wasn't until Myers was in his late thirties that he began writing again. And once he did, the stories practically came pouring out—and almost every one of them excellent. His stories appeared in most of the premier science fiction and fantasy magazines of the day—
Analog, Galaxy, If, Amazing, The Magazine of F&SF—
and he seemed on the verge of becoming one of science fiction's top authors.

We'll never know. In the summer of 1971, against the advice of his mother, Howard Myers took a vacation to Florida. The combination of the heat and his medical condition combined to give him a massive heart attack which killed him. He was forty-one years old.

There have been other science fiction writers struck down in their prime, of course. Henry Kuttner and Cyril Kornbluth immediately come to mind; or Keith Laumer, who survived the stroke he suffered in his mid-forties, but was never the same writer afterward; or Randall Garrett, whose mind was destroyed in his early 50s by a viral brain infection. But at least those writers had enjoyed long and successful careers before the end came. That we can think of, only Stanley G. Weinbaum and Rosel George Brown suffered the same fate as Myers: felled, just on the eve of triumph.

There's something horribly poignant about it; as if Achilles, stepping ashore outside the walls of Troy, had lost his footing and drowned in the surf.

So be it. Achilles was a noted warrior even before the Trojan war, after all. And whatever Howard L. Myers might have become, what remains is what he
did
accomplish. And that was no small thing. In four short years, he produced a body of work which, though small in comparison to that of writers with longer careers, certainly does not suffer in terms of quality.

One novel,
Cloud Chamber.
Two, really, if we count the novellas "The Infinity Sense" and "The Mind-Changer" as parts of a single story—which is how Myers intended them to be read.

A cycle of stories, usually called the "Econo-War series" but actually part of a broader framework, which are unique in science fiction. (The entirety of it, which we've titled "The Chalice Cycle," is included in this volume.)

And almost twenty other stories, ranging from the chilling "Fit for a Dog" to some of the wittiest science fiction stories ever written.

So, we invite you to make the acquaintance of an author who, had it not been for misfortune, would have been a well-known name in science fiction. And, who knows? Hopefully, this volume will go a long way toward restoring a reputation which deserves to be.

The one-man clopter was zipping over New Mexico when Kent Lindstrom's left hand dropped its side of the book of Beethoven sonatas. Kent stared with annoyance as the hand reached forward to fool with the manual control wheel.

Damn it all! he fretted. It was Pard's memory, not his own, that needed refreshing on some spots in the "Hammer-Klavier"! He had been looking over the sonata, instead of utilizing the flight to Los Angeles for a relaxing nap, purely for Pard's benefit.

But did Pard pay attention? Hell, no! He let his mind stray instead, ignoring Beethoven and indulging his childish fascination with gadgetry.

The sonata volume dangling neglected from his right hand, Kent watched his left hand turn the control wheel a few inches counterclockwise, then release it. The wheel automatically snapped back into place and the clopter, having been swerved slightly from the center of the traffic beam, started correction to get back on its course.

Kent opened his mouth to advise Pard, in words that left no doubt, that it was time to quit being a kid. But at that instant a thunderous
Whap!
shook the clopter. Kent dropped the music volume and gazed anxiously at the control panel, wondering if Pard's fooling around had busted something.

The only red on the panel was coming from the cabin-pressure indicator. The clopter had taken a puncture, and its air was whistling away into the stratosphere outside. Kent grabbed for the emergency oxygen mask before he realized his left hand had already put it on his face and was now tightening its strap, getting it a bit tangled in his long, thick hair.

Despite his faults, Pard could think fast in a pinch.

"What happened?" Kent asked under the mask.

Pard took control of his neck muscles and turned his head to look down and to the right. There, in the alumalloy floor, was a hole over an inch across, the shredded metal curled upward along its edges. Through it Kent could see hazily a tiny panorama of New Mexican landscape sliding by in the late afternoon sun.

Then Pard turned his head upward to focus on the spot where the projectile had made its exit. The hole in the roof was a few feet to the rear of the hole in the floor.

"What could've done
that?"
muttered Kent.

Pard did not attempt a reply. Kent retrieved Beethoven from the floor, but left the book unopened in his lap while he stared at the controls. The clopter was functioning perfectly, keeping to the course and velocity that were correct for its moving niche in the air-traffic pattern.

Struck by a crazy thought, Kent drew a mental line between the punctures. The line ran parallel to the position of his body, and not more than three feet to the right of his chair.

And Pard had swerved the craft
to the left
just before the projectile struck!

"You kept that thing from hitting us!" Kent said.

His head answered with the slightest nod:
Yes.

Kent gasped: "How did you know to swerve?"

His left hand reached around to tap his right temple—Pard's half of the brain—with a finger.

"Oh, sure you're bright!" growled Kent, annoyed because the answer told him nothing. "The brightest stupe I know!" But after he simmered down for a moment he added, "Sorry, Pard. I didn't really mean that."

His left hand patted the top of his head forgivingly.

It was silly, Kent knew, to get cross with Pard for being . . . well, for being
Pard.
He wouldn't have called him a stupe if he hadn't been upset and a bit frightened by the close call they had just had.

It was Pard's way to be noncommunicative, and rather devil-may-care. (But Kent could only guess at the latter because there was no way to learn Pard's real attitude about anything.) The language center was in Kent's hemisphere of the brain. Pard could not talk, and his few unwilling attempts at writing had been such painful, meaningless scrawls that Kent had long ago quit trying to achieve two-way verbal communication with him. Pard could understand the written or spoken word with ease, but the ability to
express
words simply was not in him.

Thus, Pard was not equipped to answer such a question as "How did you know to swerve?" The reply required concepts inexpressible in the "twitch language" Pard used for such essential thoughts as "yes," "no," "give me control," "take over," "wake up," and "I'm going to sleep."

But this didn't mean Pard was stupid. For one thing, as Kent sometimes admitted to himself, the only reason Pard was not the better pianist of the two of them was that he did not
try
as hard as Kent. For another, Pard was often aware of environmental factors that Kent missed. The object which had hit the clopter, for instance . . .

Kent looked at the tiny row of radar meters at the left edge of the control panel. The six little indicator needles trembled constantly with fluctuations in the thin surrounding air. They would have been within Pard's range of peripheral vision even while his eyes were directed at the Beethoven score—and their movements obviously told Pard a lot more than they told him. Pard had been able to read an indication that an object was approaching from below—on a collision course, in fact—and he had swerved the craft at just the right moment to save their life.

Having figured this out, Kent felt better—about Pard, at any rate. It was easy enough to feel haunted, with another consciousness sharing his skull, without that consciousness acting upon information it could not possibly have acquired. The radar meters explained where the knowledge came from.

Pard accepted that without response.

As for the projectile . . . Well, thought Kent, objects don't shoot up from the ground of their own accord. And if they did, they wouldn't be aimed—or guided—precisely to tear through a lone man zooming past at an altitude of fifteen miles.

"Somebody tried to kill us," he said, "and that doesn't make sense!"

Kent did so, and set the chair on recline. After all, they had an important concert to play in less than three hours, and they should be alert and vigorous, in body and in minds, for the performance.

He idly opened the Beethoven volume again. The pages happened to part where a photo had been inserted in the book, and he knew what it was before looking at it closely: another picture of the "mystery girl." He suspected that Pard had found the photos some time when Kent was taking a "walking nap." Maybe a previous occupant had left them in a hotel suite. Why Pard kept scattering the photos around for him to find, Kent couldn't guess, and he didn't try to ask. A joke, perhaps. Pard was sort of peculiar about women, anyway.

He put the photo back and laid the book aside. He had to get a little rest.

The holing of the clopter, he mused, if not some kind of wild accident,
had
to be the result of mistaken identity, or perhaps the act of a crackpot who regarded anybody well-heeled enough to travel by clopter as an enemy. The attack
couldn't
have been aimed at him personally . . . and, therefore, it wouldn't be repeated.

The Puppet Masters by Robert A Heinlein
Nothing Ever Dies: Vietnam and the Memory of War by Viet Thanh Nguyen
Married to a Balla by D., Jackie
So Right With You by Maggie Kaye
Mighty Hammer Down by David J Guyton
Football Romance: Secret Baby Romance: Quarterbacks Heart ( Bad Boy Alpha Male Romance) (New Adult Contemporary Sports Pregnancy Romance) by Isla Jordan
Pure by Andrew Miller
Real Life & Liars by Kristina Riggle
Becoming a Jett Girl (The Bourbon Series) by Meghan Quinn
The Third Wave: An Entrepreneur's Vision of the Future by Steve Case