The Curse of Snake Island 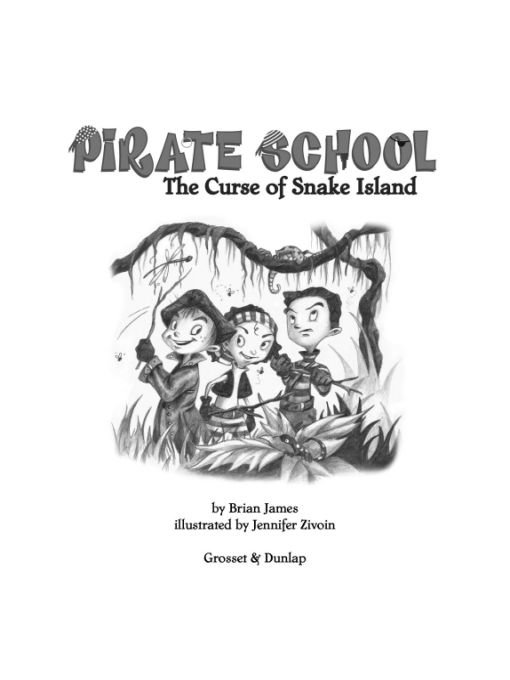 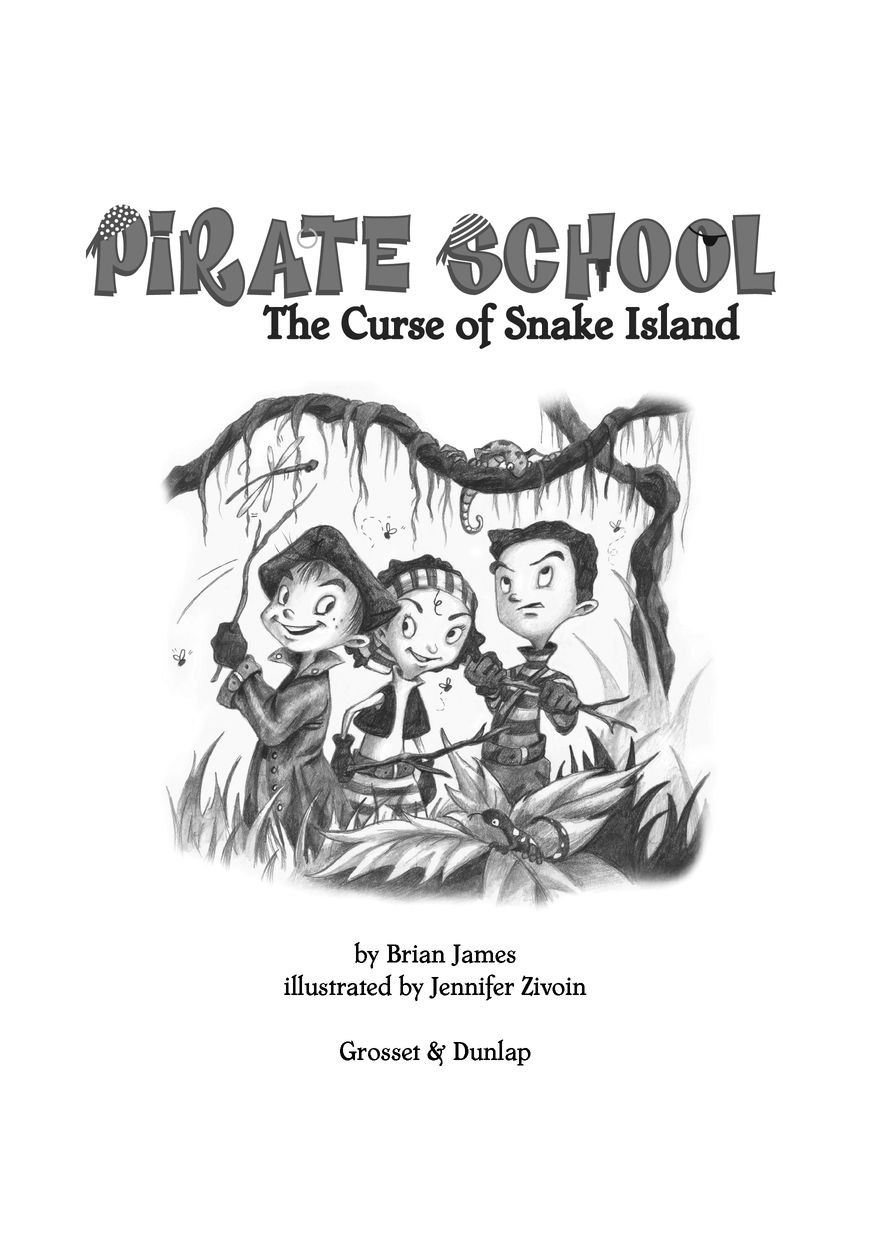 Chapter 1
Slippery Stink
I covered my nose as I looked into the tank on the main deck of our ship, the
Sea Rat
. It was filled with stinky fish guts.
Inna took a peek, too, then covered her eyes. She was the only pirate kid in the whole world who was afraid of everything gross and dirty. You could tell that from looking at her, too. She always wore fancy dresses and stuff.
“Sink me! We're not really going to walk across that, are we, Pete?” Vicky asked me in surprise.
I looked at the skinny plank that lay across the fish tank. It was only the tiniest bit wider than my feet. One slip meant smelling like rotten fish for a month!
“Aye! We have to,” I said. “Rotten Tooth is never going to teach us any real pirate stuff. Not unless we prove that we're brave enough.”
Rotten Tooth was supposed to be our teacher here at Pirate School. But so far, we hadn't learned a thing!
“Pete's right!” Aaron said, his dark eyes flashing. As Vicky's twin brother, he never missed a chance to disagree with her. Vicky and Aaron look just alike. Except Aaron's brown hair is shorter than Vicky's. “We've been here at Pirate School for two whole months, and all Rotten Tooth has taught us is how to swab the deck!”
Rotten Tooth is the first mate on our ship. Captain Stinky Beard made him our teacher on the first day of Pirate School. He said the best pirate would make the best teacher.
Rotten Tooth didn't like that one bit. He didn't like the whole idea of Pirate School. It was the captain's idea to invite us here and start the school. “Training mangy kids is a waste of me time,” Rotten Tooth told us when the captain wasn't around. “Ye ain't fit for pirating, so I'll be teaching you cleaning instead.”
We wanted to tell the captain. But we knew if we did, Rotten Tooth would turn us into shark bait in the blink of an eye. So none of us were any closer to being real pirates than we were the day we got there. And Pirate School was the only reason we left our old ships to join up on the
Sea Rat
.
“Did our captains send us here to be deckhands or pirates?” I asked my friends.
“Aye, pirates! But how is crossing that stink pit going to change Rotten Tooth's mind?” Vicky asked.
“Yeah, how?” Gary wondered. Gary was the youngest kid at Pirate School. Even though he was only nine, his parents thought he was ready to become a pirate. So they sent him to live on the
Sea Rat
âjust like the rest of our parents did.
“Because it's an old pirate test,” I replied. I'd lived on a pirate ship my whole life. All ten years. Well, nine and three-quarters, to be exact. That's longer than anyone else. So I knew lots of pirate stuff that they didn't.
“If someone wanted to become a pirate, first they had to walk across this plank,” I explained.
“Aye?” Inna asked, peeking back into the tank and making a face.
“Aye!” I said. “It proves you can keep your balance. Plus, anyone brave enough to risk smelling like that stuff is brave enough to face any danger on the sea!” I pointed to the fish guts down below.
“I guess it's worth a try,” Vicky finally agreed.
“Aye!” I said. “We'll show Rotten Tooth that we're ready for pirating.”
I stared at the slimy plank. It looked very slippery.
“Stop being such a scallywag and go already!” Aaron shouted.
Scallywag
was pirate speak for calling me a scaredy-cat. 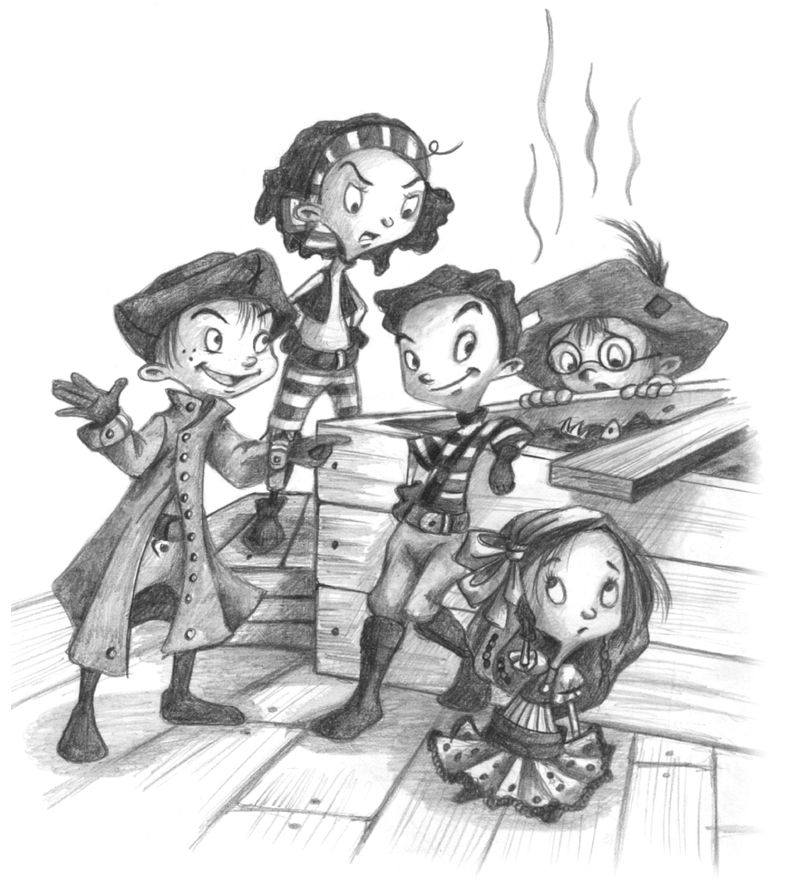 But I was no scallywag!
I was a pirate. One day, I might even be the captain of my very own ship. Captain Pete the pirate.
Just then, a wave shook the
Sea Rat.
Inna gulped.
“Maybe we should wait until the sea is steady,” I said.
“Gangway, scallywags! I'll go first,” Aaron said.
“You're going to get a face full of fish stink!” Vicky warned.
“Arrr! I can do it easy,” Aaron told her. “In fact, I could do it blindfolded,” he added.
“Could not!” Vicky shouted.
“Could too!” Aaron shouted back.
“Prove it, then!” Vicky said.
“Fine! I will!” he said.
I shook my head. Aaron was always showing off.
Aaron marched over to the tank and climbed up the side.
“Inna, can I borrow your bandana to use as a blindfold?” he asked.
“No way!” Inna shouted. Then she covered it with both hands. “I'm not letting you get fish guts on my pretty bandana.”
“I won't. I promise,” Aaron begged.
“You absolutely promise?” she asked.
Vicky grabbed the blindfold out of Inna's hands before Aaron had a chance to answer. “Enough stalling!” Vicky said, handing the bandana to her brother.
Aaron tied the blindfold over his eyes.
“This looks like a bad idea,” Gary said.
“Blimey! You think everything's a bad idea!” Vicky snapped.
“Not everything,” he said. “Just the ideas that can get us into trouble.”
“We won't get in trouble, because I'm not going to fall!” Aaron shouted as he got ready to take his first step.
“Be careful!” I warned. “The first step is the slipperiest!”
Sure enough, Aaron slipped as soon as he stepped on the board. Inna covered her eyes. She didn't want to see her bandana get ruined.
But Aaron waved his arms around and caught his balance. “See . . .”
Just then a big hand came down on Aaron's shoulder.
“Uh-oh,” I mumbled.
It was Rotten Tooth!
Rotten Tooth was the meanest, ugliestlooking pirate on the ship! His hair was green and looked like seaweed. His beard was parted in the middle and pointed out like two furry tusks. And then there were his teeth! They were just as green as his hair and sharper than a shark's.
“ARRRRR!” Rotten Tooth growled.
Aaron was so startled that he lost his balance. His feet slipped out from under him and he slid right into Rotten Tooth.
CRASH!
They fell into the tank in one stinky second!
“We're in really big serious trouble now,” Gary said.
When Rotten Tooth poked his head up, I thought I could see steam coming out of his ears. 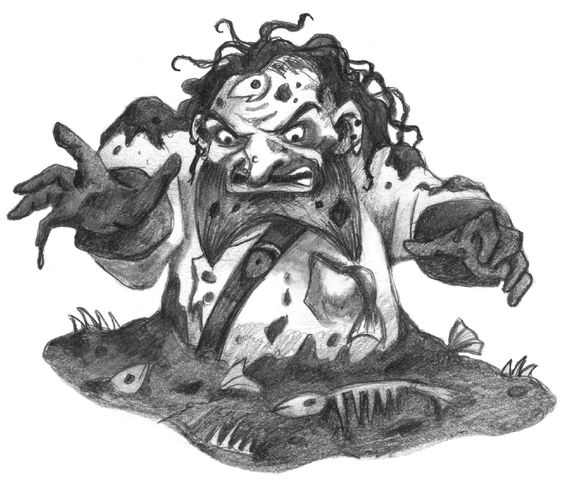