Read The Custodian of Marvels Online

The Custodian of Marvels 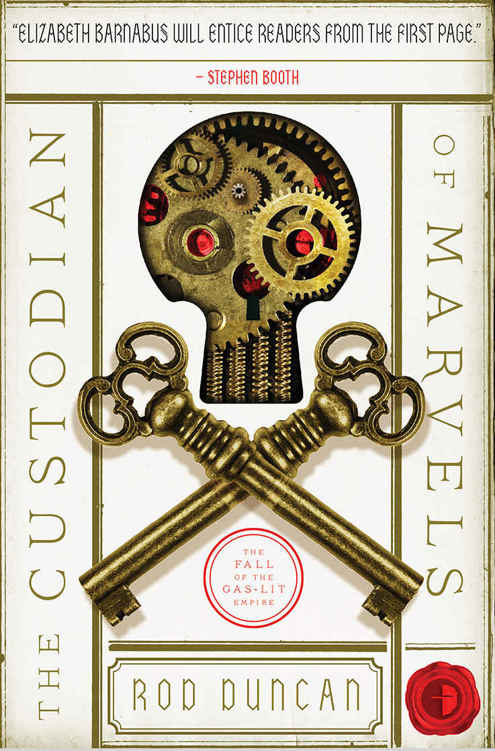 THE CUSTODIAN OF MARVELS

BEING VOLUME THREE OF
THE FALL OF THE GAS-LIT EMPIRE

A GLOSSARY OF THE GAS-LIT EMPIRE

Take off the disguise and another is revealed beneath. Regard well the many people you must be. There is no innermost layer.

The Bullet-Catcher’s Handbook
(As recorded in the Harry Timpson manuscript.)

The question of how to approach Professor Ferdinand presented a singular problem, in that the costume that would get me past his gatekeepers was not the same as the one I judged necessary to engage his curiosity.

On my first attempt I progressed only as far as the entrance hall. The soles of my shoes, being soft rope, made no sound on the flagstones. But before I was halfway across that empty chamber, a side door creaked open and a porter wearing a black bowler hat scurried out.

I put a hand to my chest, as if expressing the shock of one not used to being hailed in coarse language.

“I’m looking for the Department of Ethnographic Studies.”

His brow creased. He looked me up and down, taking in the blue calico skirt, the cloth bag hanging from my shoulder and the brass charms on a plaited cord at my waist. His confusion turned quickly to resolve.

“I’ll get rough if that’s the way you want to play it. Don’t think I won’t.” He emphasised the point by jabbing a finger towards me, then back in the direction from which I’d come.

My second attempt to access the inner cloisters was via a narrow passageway running past the college’s massive kitchens. Empty crates were stacked waiting for collection outside. I picked one, which bore the legend
Mallaig Kippers,
and carried it before me as if hurrying on a delivery.

This simple device took me between the service buildings, into a lawned quadrangle, past a group of students, who cast me not a glance, and into the shade of a covered walkway overhung by wisteria. It was here that I found my way barred by a janitor, who held a mop across his body like a musket.

“What you got there?” he asked.

“It’s for Professor Ferdinand,” I said.

Until then I’d had to guess where the professor’s rooms might be located. But, on hearing my words, the janitor turned his gaze from the fish crate to the upper storey of an ivy clad building.

It was then the janitor noticed the charms hanging from my waistband. I saw the gates closing behind his eyes.

“We don’t have gypsy girls in here,” he said. “And Professor Ferdinand isn’t that kind of man. None of them are. So you can go. Right now!”

“Then you must make the delivery,” I said, thrusting the fish-smelling box into his hands.

He fumbled, dropping both mop and crate. I half turned, preparing to run, but his hand shot out and grabbed me by the strap of my bag. I snatched it away, pulling him off balance, whereupon he tripped on the mop handle and went sprawling forwards. There was a sharp double crack, as the crate shattered under him, followed by a groan of pain.

Knowing this would be my last chance, I jumped the poor janitor and lifted my skirts to sprint off towards the ivy clad building. I was in through the door before he’d got back to his feet and had made it up two flights of stairs before hearing his footfalls labouring after me.

At the top of the building, I found a wide, wood panelled corridor. The scent of beeswax was thick in the air. I set off at a run, my feet sliding under me on the smooth floorboards. Each door had a polished name plaque –
Dr Ross
,
Dr Martin
,
Dr Bannister
. Then, at the turn of the passage, I found the one I’d been looking for:
Professor Ferdinand
.

I rapped on the door as loud as I dared. I could hear the janitor’s footsteps getting closer, uneven as if he was limping up the stairs. I gave the door one more knock, then opened it and slipped inside.

It was a room of objects. Carvings, ceramics, metalwork. Every shelf and windowsill had been used. A rounded man with salt and pepper hair looked up from a book that lay open on the desk. Spears and other tribal artefacts were displayed on the wall behind him. He reached for his spectacles.

Whatever he was about to say was cut short. The door burst open and the janitor lurched in. I jumped back as he made to grab my arm, circling away from him, first to the window and then around towards the professor’s desk. He advanced, still limping, until I was backed into the corner. My hand found the base of a wooden statue on the windowsill. I gripped it, ready to swing my arm.

“What is the meaning of this?” the professor cried.

The professor glared at me. I released my hold on the statue.

“What have you to say for yourself?”

“They wouldn’t let me see you.”

“And I’m a respectable woman!”

The professor slapped his hand onto the desk, bringing the argument to a stop.

“You are no doubt, as you say, a respectable woman,” he said. “Nevertheless, you cannot simply barge in here without appointment. We have systems. We have procedures.”

The janitor began to relax. He took half a step back towards the door. “I’ll send for the constables?”

I turned to face the professor. The charms on my waistband swung as I moved, catching his gaze. He stared.

Professor Ferdinand was still frowning, but now it seemed more in concentration than displeasure. “Perhaps,” he said. “Perhaps. But tell me, my dear, why is it you came to see me?”

I gestured to the shelves that lined his room and the artefacts that crowded them. Some might have come from Africa. But there were also objects from the world of the travelling magic show. A trick birdcage. A set of Chinese rings.

“You’re an anthropologist,” I said. “That’s why I needed to see you. I need to ask about this.”

So saying, I reached into my bag and withdrew the wreck of a leatherbound volume. There was no need to make a show of it. The book had a presence that drew the eye. Such a journey it must have taken to reach this room. I knew of but a fraction.

“
The Bullet-Catcher’s Handbook
,” I said.

The professor dwelt for a moment on the gnarled cover, burned at one corner. Then he looked to the janitor.

“It seems the constables won’t be necessary,” he said. “But perhaps you could see to it that someone brings this young lady a cup of tea.”

Professor Ferdinand took his time with the book. I sipped my tea as he examined the binding through a magnifying lens. Then he began to read, his own cup untouched on the desk. The pages crackled softly as he turned them.

My gaze wandered across to the wall, where a row of daybills hung, framed as if they were paintings. When I was a child, we had pasted such advertisements on tree trunks, walls and fences in the towns we visited. If anyone had said they might one day be hung as art, we would have laughed them to scorn.

My cup was empty. The professor’s must have been long cold. The sun moved behind a cloud and the room grew darker. At last he sat back and closed his eyes, his hands interlocked over his stomach. I was beginning to think that he might have forgotten me when he spoke.

“How is it,” he said, “that you come to be in possession of such an artefact?”

He opened his eyes. “Books of this kind are bequeathed, master to apprentice. To sell it would bring disgrace and exclusion. I’ve never heard of one being given. And to a woman.”

“It was a woman gave it to me. She had notice of her death. Before it came, that is. She was the last of her line.”

“Ah. That might explain it,” he said, nodding as if he had read in my words the bitterness of the memory. “But it’s a curious tale – such a book being passed from female to female. You claim to belong to that same world?”

“You’re dressed as a gypsy. That caught my interest – as you must have known it would. Tell me, are you of the Romani people?”

“So – one subterfuge you admit. Why not another? Why shouldn’t I think you stole the book? Why believe you come from a travelling magic show, let alone the world of the bullet-catchers? You bring an object to me –
this
object – and speak of its owner’s death. I believe I’m entitled to challenge you.”

I got up and reached for the Chinese rings on the shelf.

But before he could finish, I’d taken the five steel hoops and was turning them in my hand. Hidden from his view, my thumbnail dragged over the smooth metal, searching for the invisible break that I knew must be there.

“They are very old,” he said. “Very valuable. I would prefer it if you…”

I held one of them apart then clashed it twice back against the others. He winced at each impact. Then, with the third clash, they were linked, as if metal had magically passed through metal.

“My father taught me,” I said, placing them back on the shelf and returning to my seat.

The professor took a moment to compose himself.

“I probably deserved that,” he said at last. “But this is a peculiar meeting. You mustn’t blame me for harbouring suspicions. How did you know to approach me?”

“I read your book,
The Culture and Language of the Travelling Magic Show
.”

He polished his spectacles on a handkerchief. “It was a very small circulation. I’m surprised you found a copy.”

“It was in the library.”

“A library that would admit a woman?”

“I can be persistent,” I said.

He picked up
The Bullet-Catcher’s Handbook
, as if to refresh his memory. “What do you know of it?”

“It’s a book of sayings,” I said. “When my father met other bullet-catchers on the road, he’d quote lines to them and they’d quote back. It meant nothing. It was like country people talking of the weather.”

“Fascinating,” said the professor. “But are you certain it meant nothing? Or was there a code you hadn’t been told?”

“Then may I respectfully suggest there was more to it.” He patted the cover. “This is not a book of the ordinary sort. Each copy is different. There are famous sayings among the entries that are universal. But others are less common. It’s clear that sayings were added as it passed down the generations. In that sense, each copy needs to be seen in the context of a pedigree. The exchange of quotations – precisely chosen – as a formal greeting would remind them of their positions on a kind of family tree. Similar practices are seen in other guilds.”

Reaping Love by Crymsyn Hart
B-Movie Reels by Alan Spencer
Precinct 11 - 01 - The Brotherhood by Jerry B. Jenkins
Julia 03 - Miss Julia Throws a Wedding by Ross, Ann B
You Know Who Killed Me by Loren D. Estleman
Heartbreak Bronco by Terri Farley
A Mother's Wish by Dilly Court
Unstoppable (Fierce) by Voight, Ginger
His 1-800 Wife by Shirley Hailstock
Crazy People: The Crazy for You Stories by Jennifer Crusie