OTHER WORKS BY
SERGIO CHEJFEC 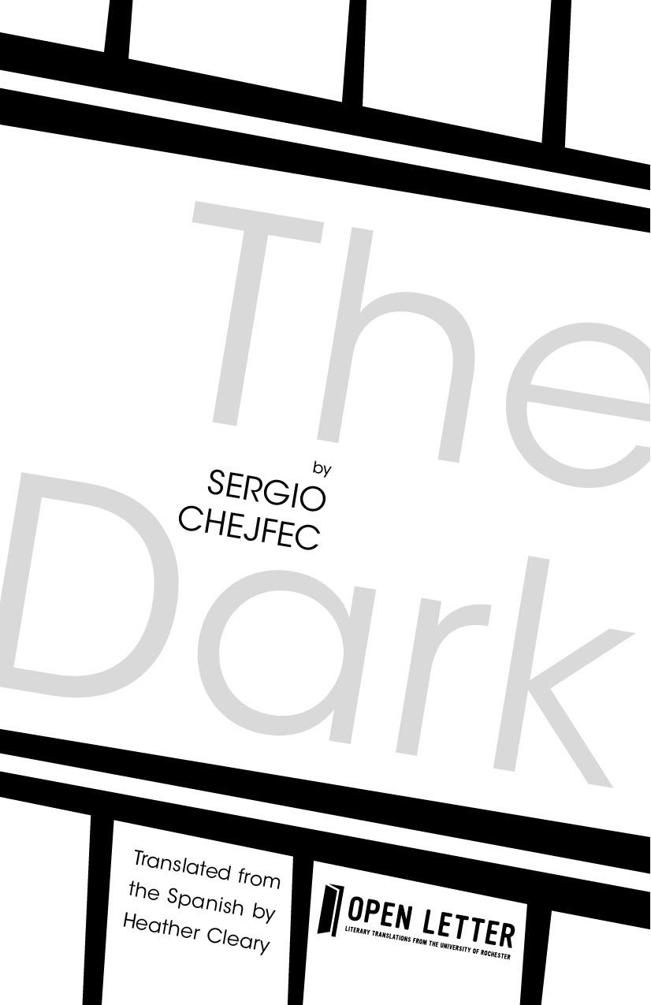 Originally published in Spanish as
Boca de lobo
by Alfaguara, 2000 It
has always unsettled me that geography does not change with time, with the changes that take place within it, within us. We retain something immaterial, similar to that something retained by geography, also immaterial. And yet, though it remains unaltered, geography is the measure of change. Just as happens with the temperature of a body, the trace it retains of its former heat allows it to continue being itself, yet this trace marks a difference. Bodies are and are not; they are at once more and less than. The same is true of geography, that is, it’s unruly. I’ve read many novels in which the protagonist returns to a forgotten place. It doesn’t matter whether the landscape is urban or rural. The slope of the hills won’t have changed, but the green will be different, or the mountains, if they’ve kept their color, will disappoint with domesticated angles, not nearly as steep as remembered. The same goes for the city: the old corner has been restored, destroyed, abandoned, and so on. The protagonist is left with a residue, a mixture of reality and oblivion, something elusive drawn from his surroundings, the contradictory signs of which, along with his disappointment and resolve, allow him to recognize places. And so some characters, in order to uncover what lies hidden, latch on to the superficial.

This is exactly what is happening to me now. I go back to where I used to meet Delia and see that much has changed, while remaining in place. This warehouse used to be an empty lot half a block wide where wildflowers would grow unchecked, floating lazily on a sea of thistles. Delia would tell me how the lot, also known as the thistle barrens, used to give her nightmares, before we—she, with her childhood barely behind her, and I, eager for her to forget it all the more quickly—pressed ourselves against the brick wall that surrounded it. The streets around there were gently sloped, and the buildings, I remember, gave the impression of having been constructed at random. Large industrial compounds bordered houses just over fifteen feet high, arranged in rows but crammed together—here the lines grew irregular, congested—to make the most of the elevation. The opposite was also true: a steel shed, no more than a large room, housed a factory with day and night shifts while, further off, a solitary residence rose up in the middle of a sprawling lot and was swallowed by the expanse. And yet, differences in size seemed irrelevant to Delia and me, as did spatial relations. Even the idea of “place” was called into question by our daily routine. There were no places, no confines; space was neither empty, nor full. Immune to all influence, nothing could contain us. The work of ages that defines the city, even the newer parts, did not exist to us. Distinctions were blurred; on our walks we could sense unfinished business, something just constructed or about to be abandoned, like a campsite taken down in a rush, something peaceful, rural and undefined that nevertheless seemed more lasting than the land itself. The solitude of the streets would attract distant sounds. For example, we would continue to hear the bus that had just left the corner of Los Huérfanos after letting Delia off, though it was headed in the opposite direction and kept moving further from us. But a place could be absent or effaced and still be sensed by some part of ourselves, in our bodies, perhaps: as we neared the thistle barrens, Delia would begin to sweat, almost imperceptibly. The sheen transformed her face, now paler than before, and turned her hands and arms to ice. She would tremble, youthful fear and adult desire joined in her agitation. Although attraction and resistance were no longer in opposition, she retained the memory of both, and the struggle between these recollections pushed her toward the brink. And so she got confused, not as a result of ignorance, inconsistency, or insecurity, but because she instinctively sensed that things on a threshold tend to remain incomplete. And Delia lived on a threshold: on the psychological border of her youth, and the physical one of her family.

It all began on the corner of Los Huérfanos, where I would watch her get off the bus. Delia would arrive as evening fell, place one foot on the pavement, and head straight for her house. Later on, I’ll say more about the way she took that first step. I remember that someone would eventually turn up to wait for her. A woman would appear ten minutes before the bus and look down the road, intent on its arrival. Sometimes her impatience would show; she would clench her fists until they were red and fleshy, her hands eager to be doing something else. She’d greet Delia brusquely, take her arm, and the two of them would leave the corner and head down a side street. I always watched her get off the bus—the same foot, the same movement, the same air—until one day, by chance, I found out where she got on, and this meant guessing her occupation. The truth is, I don’t remember the day or the circumstances, but I know that it happened like this: I was taking the bus in the opposite direction and saw someone standing just ahead with one arm raised. I recognized her back, her neck, her fingertips, the outline of her childish form carved out against the fading afternoon light. A few blocks to the east there was a school, a small, dilapidated structure that had been there for a hundred years. Surely Delia was a student there. All of the town’s battered pride converged on this school: there wasn’t an older or more distinguished building around, and none was better suited to facing, by virtue of its presence alone, the pervasive feeling of adversity. Today, for example, I walked past and saw that it hasn’t changed at all. At the appointed hours, students would spill from its doors and onto the streets, hungry and unaware of the deeper meaning, if there was one, of their routine. The girl who was Delia, at the time still nameless to me, presumably went into that building every day to, as they say, acquire knowledge. Then she would leave and begin the journey home, the culmination of which I knew well: the moment she stepped down onto the pavement on the corner of Los Huérfanos. The school radiated students, and Delia was one of its innumerable rays. Part of this routine was that the students would circulate aimlessly, carefree and unselfconscious, though everyone else was quite conscious of them. But unwanted knowledge often comes to us, anyway. I forgot in that first moment that just two blocks in the other direction, to the west, there was a factory. Unlike the school, the factory could go unnoticed by someone who didn’t want to see it, and yet the truth lay there, and I’m not just talking about Delia. I mean that power emanated from the factory, authority; something at once imposing and caustic.

I disliked the fact that Delia worked, but it was an idea that had no clear shape. Contrary to what one might think, it was not a sentimental qualm or a matter of denouncing an injustice, at least, not in that sense. I disliked the fact that Delia worked for the most obvious of reasons; paradoxically, for the very circumstance that made her do so: because it turned her into something else, something outside herself, setting her feet on yet another border. Delia was probably no less innocent, if one can speak of innocence, than was normal for someone like her, but she did have different habits, a different routine. At any rate, she probably “knew” more, and different, things than other people her age. What she knew was what we don’t want to know, but is, just the same. Still, later on, when we would spend nights walking along deserted streets, I felt a certain pride to know that the hands that sometimes touched me were the same ones that, hours earlier, had been operating machinery, handling tools, or moving future merchandise. These activities, designed primarily to make use of her physical strength—and, in the end, to sap it entirely—nonetheless granted her an immense vigor, in the form of an abundance or zeal that could overcome great adversity and moments of misfortune. Every so often I would think of the circle Delia represented: from the innocence I attributed to her at the beginning, to the strength of character one imagines the working class to have, then back to the simplicity of someone who considers her work to be essentially individual, so subjective it is invisible even to her. Delia was like that. This conviction could, in fact, have been grounded in profound wisdom, but it manifested itself in such a straightforward and constant way that it closed the circle perfectly, connecting the experiences and the sojourns of her spirit. The discovery that she worked in a factory, though it surprised me, was what made me fall in love with her. I can say, without exaggeration, that it was the mark that distinguished her from the rest of the human race, the condition that made her stand out from all other women. “Look at her… and a factory worker, at that…” I would think, assigning her a double density. As a thought it was empty, almost meaningless, but its shortcomings were compensated by the eloquence of the word and the circumstance: “worker.” A silvery ring seemed to surround her, announcing her condition and emphasizing it among other occupations and the titles these carry with them. And so each of her movements, even the mechanical one of stepping down with her right foot onto the corner of Los Huérfanos, took on another meaning. Although I didn’t know her—she and I had never actually exchanged words, nor had I ever had the chance to observe her carefully, up close—Delia already embodied the most desirable, the most complete ideal of a woman. In this fragmentary, accidental way, all my senses were focused on her, trying at first to get their bearings as they received the signs of her movements each afternoon. When they finally achieved this, evidently, it was forever.