Read The Dark Between Online 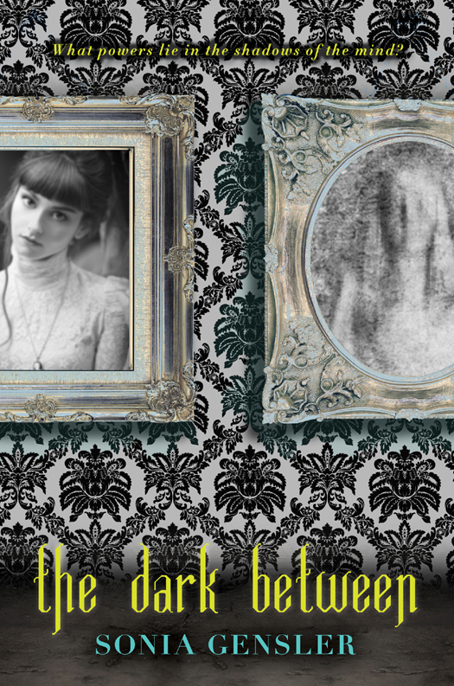 All rights reserved. Published in the United States by Alfred A. Knopf, an imprint of Random House Children’s Books, a division of Random House, Inc., New York.

FOR L. K. MADIGAN, WHO LIVES ON IN OUR HEARTS

W
hen Kate Poole was twelve, her body had folded easily into the medium’s throne. Her limbs had been shorter, her joints more elastic. In those days she stayed cool and supple while waiting for the hymns to end.

Now, two years later, she was a leggy foal contorted in the womb, straining for freedom and the first breath of life. Perspiration soaked her chemise, and her limbs twitched and tingled.

After an eternity of singing, Mrs. Martineau’s voice rose to a crescendo. In response, the sitters sang more passionately. Kate reached back to slowly lift the hinged panel, inhaled a lovely breath of fresh air, and pushed her head and arms out of the hidden compartment. Once her hands found the thick support bar on the back of the medium’s chair, she slid her legs out and pulled herself up to a low crouch.

“Hand in Hand with Angels” drew to a close and the great chair creaked as Mrs. Martineau’s body began to convulse. The sudden movement quieted the singers to a low hum. When the room fell silent, Mrs. Martineau spoke in her singsong trance voice.

“Dear friends, my spirit guide beckons. Do not be afraid. She wishes to show herself.”

Kate heard the rustling of fabric as the sitters leaned forward. This was what they had come to see, after all. She clung to the back of the chair, bouncing gently on the balls of her tingling feet.

“The spirit will walk among you,” continued the medium. “Do not be alarmed if you feel her touch. She reaches for the souls of your loved ones. She intends you no harm.”

Kate rolled her eyes. The audience
loved
to feel the spirit touch—the gentlemen, especially. Some of them liked to feel back, and there wasn’t much Kate could do to stop them. All part of the show, as Mrs. Martineau would say.

The medium shuddered rhythmically, rising off her seat a few inches as she did so. In response, Kate slowly rose behind Mrs. Martineau’s head, hidden by the vast hood of the woman’s white cloak. After another spell of twitching, Mrs. Martineau moaned dramatically and collapsed onto the table. At the same moment Kate stood at her full height behind the chair.

The audience gasped. They always did, even when they had come many times before.

Kate was a ghastly sight in the dim light sputtering from the gas fixtures—she knew this because Mrs. Martineau had once brought a mirror to the parlor so she could see her reflection in the near darkness. When Kate had looked in the glass and seen her thin frame draped in a shimmering, transparent shroud, her mouth fell open. The vision was perfectly ghoulish.

The next bit was her favorite. She pulled the shroud to her shoulders, revealing her face.

More than one lady cried out. A gentleman cleared his throat. Again there was a rustling of fabric as people shifted in their seats. Kate well knew how her brown eyes, rimmed with kohl, appeared
as gaping holes against the unnatural paleness of her face. In that moment she didn’t care that the luminous powder wrecked her skin, or that the wig made her scalp itch and sweat. Nor did it shame her that the costume—a gauzy wrap draped over the merest of underpinnings—left her exposed and shivering. In the dim light of the parlor, she was a wraith from a horror tale.

And she held them all under her spell.

Kate arched her back and began the slow movements of the spirit dance. The ladies rarely gave her trouble. They shivered at her touch and occasionally giggled when she sighed in their ears, but they never laid a hand on her. Once a lady had cried, “She reeks of onions!” and Mrs. Martineau had given Kate a good thumping when the sitters were gone. Thereafter she could take only bread and milk before the séances.

The gentlemen were altogether different. She could almost smell it on them—their longing to touch her. A few managed to keep their hands to themselves, but most had to claim a piece of her before she moved on. Some ran fingers through the long hair of her wig or stroked her bare arm; others probed underneath the shroud in a furtive search for her thighs. Though she’d long ago ceased to be shocked by their hot breath and wandering hands, she would never find it
pleasing
to be fondled by whiskery old fools. She often felt a powerful urge to pinch them back, but all she could do was step lightly away, sighing her sorrow as spirits were wont to do.

That night her dance lacked its usual elegance, for her right foot was still prickly and awkward. This sluggishness seemed to work to her advantage, however, for the men committed no worse acts than light pawing. The two gentlemen placed at the medium’s left—attending for the first time that evening—did nothing at all. In fact, they barely looked her way as she floated past them.

Finally she returned to her place behind Mrs. Martineau. When the woman lifted her head from the table and sat up straight, Kate drew her arms together and crouched, as though melting into the darkness behind her. But just as she lifted the panel to the compartment, Mrs. Martineau spoke.

“My spirit guide has encountered a very powerful presence with us tonight. My friends, the spirit of Frederic Stanton has crossed the dark chasm to join us.”

Kate dropped the panel, and the clatter echoed throughout the room.

She flinched at the exclamation. Robert Eliot was the medium’s patron, and as such he always had the best seat at the table. The best angle for groping Kate, too. Missus would not be pleased that Kate’s bumbling had so provoked him.

“This is utterly ridiculous,” said a soft voice near her. She thought it must be one of the aloof gentlemen. “Mr. Wakeham,” the man continued, “would you be so kind as to turn up the gas so everyone might see?”

“No!” bellowed Mrs. Martineau. “You will do great harm to the spirit!”

Roused by this sudden burst of anger, Kate lifted the panel again and thrust her feet into the compartment. A moment later a burst of gaslight brightened the room and a pair of hands seized her shoulders, pulling her to her feet.

“Here’s the confederate, Thompson. Hiding in the chair, of all places.”

Kate gasped as the wig was plucked from her head. She craned her neck to see whose hand gripped her upper arm. She did not know his name, but it was the younger of the two newcomers.

“I say,” cried Eliot, puffing his broad chest. “You promised
you would not disrupt the meeting.” He directed his words to the grey-bearded fellow, her captor’s companion.

Mrs. Martineau looked from the strangers to her patron. “Who is this man, Mr. Eliot?”

The bearded gentleman clasped his hands at his chest. “I beg your pardon, madam. I am Oliver Thompson. And Wakeham”—he gestured toward the man holding Kate—“is my colleague. We represent the Society for Metaphysical Research. Mr. Eliot encouraged us to attend tonight.”

“They expressed an interest.” Eliot’s forehead gleamed with perspiration. “I’ve told them of your spirit manifestations, and they wished to observe. I meant to finally give them proof of the spirit’s ability to communicate after death … but it’s all gone horribly wrong.”

“Thompson and I suspected fraud, Mrs. Martineau, and now we have exposed it for all to see,” said Mr. Wakeham, his fingernails still cutting into Kate’s shoulder.

“No,
you
have perpetrated a fraud, Mr. Wakeham!” cried Mrs. Martineau. “You and your colleague brought this girl here tonight. You planted her in an attempt to discredit me.” The medium paused, her expression growing bolder as her favored sitters sputtered their outrage. She raised her hand to still their voices. “I sensed something was not quite right, but I could not put my finger on the source of the disturbance … until now.”

Mr. Thompson lifted his hands. “This is ridiculous. Eliot, how can you countenance this woman’s deception?”

“It seems the girl has tricked us all,” said Eliot weakly.

Mrs. Martineau took a deep breath and looked calmly around the table. “Ladies and gentlemen—my dear friends—I have been deceived along with you. These men have tricked me
and now they most certainly will slander me.” She staggered back, eyelids fluttering. Mr. Eliot stepped to her side, offering his arm, and she smiled weakly at him before turning back to her audience. “I beg you all to leave me now. A dark presence has defiled our circle, and it will take some time for me to recover.”

With a limp hand she beckoned her maid, who herded the sitters out. Mrs. Martineau sank back into her throne, eyes closed. Mr. Wakeham’s grip finally eased, and Kate shrugged him off to step toward the medium.

Mr. Thompson sighed. “I think we’re finished here. Shall we push on, Wakeham?”

What?
Kate stared at her, but the woman did not open her eyes.

“Surely you are mistaken, dear lady,” said Eliot, swabbing his forehead with a handkerchief. “This can’t be the work of the Metaphysical Society.”

“He’s correct, of course. We’ve never seen the girl before.” Mr. Wakeham’s upper lip curled as he tossed the wig to Kate. “Eliot, I assume you’re coming with us?”

The instant the two gentlemen passed through the doorway, Mr. Eliot lurched toward Kate. “I believed in you,” he said thickly, as if choked by emotion. “You seemed made of air—a creature from another world.”

The Siege: 68 Hours Inside the Taj Hotel by Adrian Levy
A Season of Secrets by Margaret Pemberton
The Last Cop Out by Mickey Spillane
Tokyo Underworld by Robert Whiting
Strange is the Night by Sebastian, Justine
Bone by Bone by Sanjida Kay
Seven Days of Friday (Women of Greece Book 1) by Alex A. King
Executive Suite by Cameron Hawley
Eclipse of the Soul: The Interdimensional Saga, Book 2 by J.L. Hendricks
War Factory: Transformations Book Two by Neal Aher