Read The Dark Boatman: Tales of Horror and the Cthulhu Mythos Online

The Dark Boatman: Tales of Horror and the Cthulhu Mythos 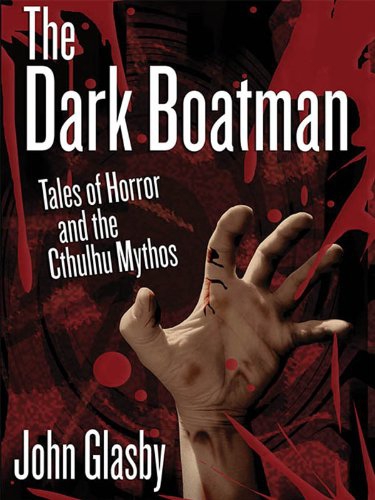 THE KEEPER OF DARK POINT 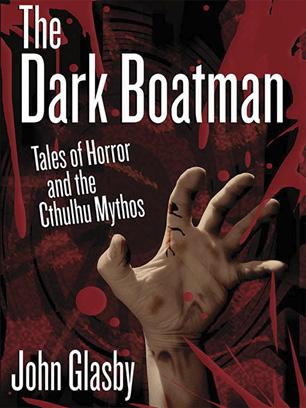 The Dark Boatman: Tales of Horror and the Cthulhu Mythos

The Lonely Shadows: Tales of Horror and the Cthulhu Mythos

The Mystery of the Crater: A Science Fiction Novel

Copyright © 2012 by the Estate of John Glasby

J
OHN
S
TEPHEN
G
LASBY
was born in 1928, and graduated from Nottingham University with an honours degree in Chemistry. He started his career as a research chemist for I.C.I. in 1952, and worked for them until his retirement. Over the next two decades, he began a parallel career as an extraordinarily prolific writer of science fiction novels and short stories, his first novels appearing in the summer of 1952 from Curtis Warren Ltd. under various house pseudonyms such as “Rand Le Page” and “Berl Cameron,” as was the fashion of the day. Late in 1952, he began an astonishing association with the London publisher, John Spencer Ltd., which was to last more than twenty years.

Glasby quickly became Spencer’s main author, writing hundreds of stories and novels on commissions in several genres. Not only was Glasby required to switch back and forth from science fiction to supernatural stories (his preferred media), but also to Foreign Legion sagas, Second World War novels, hospital romances, crime novels, and westerns. He quickly amassed a large number of personal pseudonyms, the best known being “A. J. Merak,” under which name a number of his science fiction novels were reprinted in the 1960s in the United States.

When his association with John Spencer eventually ended, he took the opportunity to sell a science fiction novel under his own name to Don Wollheim at Ace Books (
Project Jove
, 1971). Always a great fan of the work of H. P. Lovecraft, he then wrote a collection of Mythos stories for August Derleth at Arkham House. Derleth suggested extensive revisions and improvements, which Glasby duly followed, but then unfortunately died before the collection could be published, and the book was returned.

Interested in astronomy since childhood, Glasby had joined the variable star section of the British Astronomical Society in 1958, and was made Director in 1965. He was elected a Fellow of the Royal Astronomical Society in 1960, and he published numerous textbooks and encyclopedias on astronomy and chemistry, the first being
Variable Stars
in 1968.

During the early 1960s, Glasby wrote dozens of paperback westerns, all of which were reprinted in hardcover and paperback four decades later. Their success prompted the author to write new westerns, of which almost a dozen have appeared in recent years. Also revived were his 1960s “Johnny Merak” private eye novels, and Glasby continued to write new adventures of his Chandler-like hero.

Following his retirement from I.C.I., Glasby returned to writing more supernatural stories in the Lovecraftian vein, and a number of his stories have appeared in American small press magazines and in Mythos anthologies edited by Robert M. Price. In recent years new supernatural stories have appeared in original collections edited by leading horror anthologist Stephen Jones, and in Philip Harbottle’s
Fantasy Adventures
collections (published by Wildside Press).

His novelette, “Innsmouth Bane,” was featured in the second issue of
H. P. Lovecraft’s
Magazine of Horror
. Glasby’s most ambitious Lovecraftian work was
Dark Armageddon
, as yet unpublished, a trilogy of novels that unifies and brings to a climatic conclusion Lovecraft’s Cthulhu Mythos cycle.

An all-new collection of ghost stories,
The Substance of a Shade
, was published in the UK in 2003, followed by
The Dark Destroyer
, a new supernatural novel, in 2005. In 2007 Glasby was adjudged the ideal choice to continue John Russell Fearn’s famous “Golden Amazon” series, and three authorized novels,
Seetee Sun
,
The Sun Movers
, and
The Crimson Peril
, have appeared to date. A fourth novel,
Primordial World
, is scheduled to appear in 2012.

Several of the best of Glasby’s SF, supernatural, and detective titles are being published by the Borgo Press.

John Glasby died on June 5, 2011, following a long and courageous battle with illness, during which time he continued to write with undimmed power.

When I received a letter from my late uncle’s solicitors informing me that, as the last of the family line, I had been left the old mansion overlooking the sea on the south coast of Cornwall, my first instinctive impulse was to ask them to advertise the place for immediate sale since I had no wish to cut myself off completely in such an isolated spot. I had visited my uncle on only one occasion in my lifetime, more than fifteen years before, and my memories of that visit were far from pleasant.

I was seventeen at the time, and it had been late autumn with low cloud and an eternal mist sweeping in from the sea, making it impossible to see anything of the surrounding countryside. I had been a virtual prisoner within the ancient house for two whole weeks; and my uncle, who lived the life of a recluse, shunning all contact with the few neighbours he had, was not a fit companion for a youth. He had spent all of the day and most of the night poring over musty old tomes in the library which, though well-stocked with volumes, held only queer literature concerning myths and histories of races no more recent than the ancient Greeks.

The mansion itself had a history almost as long. Parts of it dated back to the time of the second William, and the more modern renovations were on the Gothic style, with long, gloomy corridors and narrow passages which intersected in such puzzling patterns that it was easy to lose one’s way in the labyrinthine maze, which extended from one wing to the other.

Two things, however, conspired to force me to change my mind and move from my native Yorkshire to Cornwall. The first was my health, which had been deteriorating somewhat over the past four years; my doctor was of the considered opinion that the more salubrious nature of the Cornish weather would be more conducive to a return to better health than the windswept moors of Yorkshire. With summer approaching, the warmer climate would undoubtedly prove both beneficial and invigorating.

The second reason was a further letter, which arrived six days after the first. Like the other, it came from my uncle’s solicitors, but inside was a second envelope with my name on it written in my uncle’s spidery script in the India ink I remembered him using.

“My dear nephew,” he wrote. “By the time you receive this I will have departed this earth and as you are my only heir, there are certain points I must bring to your notice concerning the family mansion at Tormouth. These may appear strange to one unaccustomed to our ways, but I earnestly assure you they are not the product of a senile or deranged mind and must be followed implicitly. The duty of carrying them out now falls upon you and if it is of any consolation to you, as the only living Dexter, yours will be the final act in the tradition of the Dexters that has been carried on for more centuries than you would ever believe. You will find the key you seek in the concealed compartment of my desk. The opener is the left arabesque.
But use it not until the time is right, unless you call over Him who comes only at the appointed hour.
And how shall you know the time? That is given by the clock in the upper room. I adjure you to watch it closely, for no one knows the hour when the key must be used.”

I read this strange letter several times, unable to make either head or tail of it. I was well aware I was the last in a long line of Dexters, that I could trace my lineage back, unbroken, for more than eighteen hundred years. But what was all this rigmarole about a key? A key to which lock? And as for keeping continuous watch on a certain clock, waiting for some particular preordained hour to strike—that made no sense to me at all. Nonetheless, the contents of the letter wetted my natural curiosity, and I knew that, whatever happened, I had to move into that ancient manor if only to satisfy myself as to the real reason behind my uncle having written such a bizarre epistle.

I did not, however, intend to go alone; at least not until I had discovered all I could about the place and its curious secrets. I decided to ask a colleague of mine, Michael Ambrose, to accompany me. I knew him for a gifted antiquarian, well versed in ancient history and many of the old myths and religions. When I approached him, he accepted with alacrity, for he had read a great deal about my family history and the strange stories that surrounded the mansion on the cliffs.

Accordingly, we both took the express to Penzance, arriving early in the evening on a glorious late spring day. My recollection of Tormouth was vague and prone to the inevitable inaccuracies associated with a brief memory of more than fifteen years before. However, we soon discovered there was no public transport which would take us there even at that early hour of the evening. There was, we learned, a bus that went out to Tormouth the next morning, although it might be possible to hire a car for our purpose.

Since we were both anxious to reach the mansion as quickly as possible, we decided on the latter course and obtained directions to the nearest garage where we might obtain such transport.

The garage proprietor seemed willing to hire us a car, several of which were available. But his demeanour changed dramatically when we mentioned our destination. Now he became oddly reluctant, maintaining that Tormouth was a place with an evil reputation, one that stretched back for more years than he could remember. No one knew for certain just what it was about the place that instilled such weird notions into people’s minds, but it was a tangible thing best not ignored.

I forbore to tell him my name, for I had the feeling that much of the outside animosity and superstitious fear directed towards the village was primarily against my family, and mention of the name Dexter might be more than enough to make him refuse point-blank to provide us with a car.

In the end, after much forcible argument, he agreed to let us have a decrepit vehicle, which, from its very appearance, did not look capable of taking us to our destination. However, since beggars could not be choosers, we were forced to accept his offer with as much grace as we could muster.

Half an hour later, we left Penzance and took the road east, following the directions we had been given. Dusk had already settled over the countryside, and we drove in silence for almost half an hour, entering terrain that grew more barren and wild with every passing mile. Gripping the wheel, I peered intently through the dusty windscreen, searching for some sign of the signpost we had been told to watch out for. Several narrow tracks led off the road, but none of these were signposted, and were little more than rutted paths leading apparently nowhere across deserted moorland and low, rounded hills that brooded oppressively on the skyline.

An Accidental American: A Novel by Alex Carr
Heart of the Matter by Marta Perry
Find A Way Or Make One by Kelley, E. C.
The Amish Way by Kraybill, Donald B., Nolt, Steven M., Weaver-Zercher, David L.
Death in the Fifth Position by Gore Vidal
Futuro azul by Eoin Colfer
Martin Marten (9781466843691) by Doyle, Brian
Cornucopia by Melanie Jackson
Mecha Rogue by Brett Patton
The Yoghurt Plot by Fleur Hitchcock