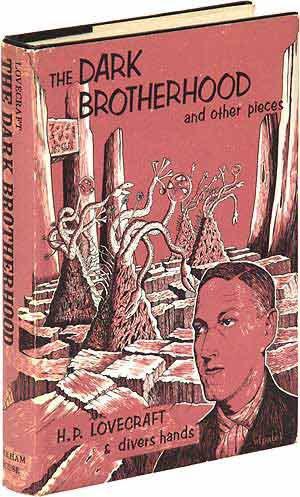 It is probable that the facts in regard to the mysterious destruction by fire of an abandoned house on a knoll along the shore of the Seekonk in a little habited district between the Washington and Red Bridges will never be entirely known. The police have been beset by the usual number of cranks, purporting to offer information about the matter, none more insistent than Arthur Phillips, the descendant of an old East Side family, long resident of Angell Street, a somewhat confused but earnest young man who prepared an account of certain events he alleges led to the fire. Though the police have interviewed all persons concerned and mentioned in Mr. Phillips’ account, no corroboration—save for a statement from a librarian at the Athenaeum, attesting only to the fact that Mr. Phillips did once meet Miss Rose Dexter there—could be found to support Mr. Phillips’ allegations. The manuscript follows.

The nocturnal streets of any city along the Eastern Seaboard afford the nightwalker many a glimpse of the strange and terrible, the macabre and outré, for darkness draws from the crevices and crannies, the attic rooms and cellar hideaways of the city those human beings who, for obscure reasons lost in the past, choose to keep the day secure in their grey niches—the misshapen, the lonely, the sick, the very old, the haunted, and those lost souls who are forever seeking their identities under cover of night, which is beneficent for them as the cold light of day can never be. These are the hurt by life, the maimed, men and women who have never recovered from the traumas of childhood or who have willingly sought after experiences not meant for man to know, and every place where the human society has been concentrated for any considerable length of time abounds with them, though they are seen only in the dark hours, emerging like nocturnal moths to move about in their narrow environs for a few brief hours before they must escape daylight once more.

Having been a solitary child, and much left to my own devices because of the persistent ill-health which was my lot, I developed early a propensity for roaming abroad by night, at first only in the Angell Street neighborhood where I lived during much of my childhood, and then, little by little, in a widened circle in my native Providence. By day, my health permitting, I haunted the Seekonk River from the city into the open country, or, when my energy was at its height, played with a few carefully chosen companions at a “clubhouse” we had painstakingly constructed in wooded areas not far out of the city. I was also much given to reading, and spent long hours in my grandfather’s extensive library, reading without discrimination and thus assimilating a vast amount of knowledge, from the Greek philosophies to the history of the English monarchy, from the secrets of ancient alchemists to the experiments of Niels Bohr, from the lore of Egyptian papyri to the regional studies of Thomas Hardy, since my grandfather was possessed of very catholic tastes in books and, spurning specialization, bought and kept only what in his mind was good, by which he meant that which involved him.

But the nocturnal city invariably drew me from all else; walking abroad was my preference above all other pursuits, and I went out and about at night all through the later years of my childhood and throughout my adolescent years, in the course of which I tended—because sporadic illness kept me from regular attendance at school—to grow ever more self-sufficient and solitary. I could not now say what it was I sought with such determination in the nighted city, what it was in the ill-lit streets that drew me, why I sought old Benefit Street and the shadowed environs of Poe Street, almost unknown in the vastness of Providence, what it was I hoped to see in the furtively glimpsed faces of other night-wanderers slipping and slinking along the dark lanes and byways of the city, unless perhaps it was to escape from the harsher realities of daylight coupled with an insatiable curiosity about the secrets of city life which only the night could disclose.

When at last my graduation from high school was an accomplished fact, it might have been assumed that I would turn to other pursuits; but it was not so, for my health was too precarious to warrant matriculation at Brown University, where I would like to have gone to continue my studies, and this deprivation served only to enhance my solitary occupations—I doubled my reading hours and increased the time I spent abroad by night, by the simple expedient of sleeping during the daylight hours. And yet I contrived to lead an otherwise normal existence; I did not abandon my widowed mother or my aunts, with whom we lived, though the companions of my youth had grown away from me, and I managed to discover Rose Dexter, a dark-eyed descendant of the first English families to come into old Providence, one singularly favored in the proportions of her figure and in the beauty of her features, whom I persuaded to share my nocturnal pursuits.

With her I continued to explore nocturnal Providence, and with new zest, eager to show Rose all I had already discovered in my wanderings about the city. We met originally at the old Athenaeum, and we continued to meet there of evenings, and from its portals ventured forth into the night. What began light-heartedly for her soon grew into dedicated habit; she proved as eager as I to inquire into hidden byways and long disused lanes, and she was soon as much at home in the night-held city as I. She was little inclined to irrelevant chatter, and thus proved admirably complementary to my person.

We had been exploring Providence in this fashion for several months when, one night on Benefit Street, a gentleman wearing a knee-length cape over wrinkled and ill-kept clothing accosted us. He had been standing on the walk not far ahead of us when first we turned into the street, and I had observed him when we went past him; he had struck me as oddly disquieting, for I thought his moustached, dark-eyed face with the unruly hair of his hatless head strangely familiar; and, at our passing, he had set out in pursuit until, at last, catching up to us, he touched me on the shoulder and spoke.

“Sir,” he said, “could you tell me how to reach the cemetery where once Poe walked?”

I gave him directions, and then, spurred by a sudden impulse, suggested that we accompany him to the goal he sought; almost before I understood fully what had happened, we three were walking along together. I saw almost at once with what a calculating air the fellow scrutinized my companion, and yet any resentment I might have felt was dispelled by the ready recognition that the stranger’s interest was inoffensive, for it was rather more coolly critical than passionately involved. I took the opportunity, also, to examine him as carefully as I could in the occasional patches of streetlight through which we passed, and was increasingly disturbed at the gnawing certainty that I knew him or had known him.

He was dressed almost uniformly in sombre black, save for his white shirt and the flowing Windsor tie he affected. His clothing was unpressed, as if it had been worn for a long time without having been attended to, but it was not unclean, as far as I could see. His brow was high, almost dome-like; under it his dark eyes looked out hauntingly, and his face narrowed to his small, blunt chin. His hair, too, was longer than most men of my generation wore it, and yet he seemed to be of that same generation, not more than five years past my own age. His clothing, however, was definitely not of my generation; indeed, it seemed, for all that it had the appearance of being new, to have been cut to a pattern of several generations before my own.

“Are you a stranger of Providence?” I asked him presently.

“I am visiting,” he said shortly.

“How much do you know of him?” I asked then.

“Little,” he replied. “Perhaps you could tell me more?”

I needed no second invitation, but immediately gave him a biographical sketch of the father of the detective story and a master of the macabre tale whose work I had long admired, elaborating only on his romance with Mrs. Sarah Helen Whitman, since it involved Providence and the visit with Mrs. Whitman to the cemetery whither we were bound. I saw that he listened with almost rapt attention, and seemed to be setting down in memory everything I said, but I could not decide from his expressionless face whether what I told him gave him pleasure or displeasure, and I could not determine what the source of his interest was.

For her part, Rose was conscious of his interest in her, but she was not embarrassed by it, perhaps sensing that his interest was other than amorous. It was not until he asked her name that I realized we had not had his. He gave it now as “Mr. Allan,” at which Rose smiled almost imperceptibly; I caught it fleetingly as we passed under a street-lamp.

Having learned our names, our companion seemed interested in nothing more, and it was in silence that we reached the cemetery at last. I had thought Mr. Allan would enter it, but such was not his intention; he had evidently meant only to discover its location, so that he could return to it by day, which was manifestly a sensible conclusion, for—though I knew it well and had walked there on occasion by night—it offered little for a stranger to view in the dark hours.

We bade him good night at the gate and went on.

“I’ve seen that fellow somewhere before,” I said to Rose once we had passed beyond his hearing. “But I can’t think where it was. Perhaps in the library.”

“It must have been in the library,” answered Rose with a throaty chuckle that was typical of her. “In a portrait on the wall.”

“Surely you recognized the resemblance, Arthur!” she cried. “Even to his name. He looks like Edgar Allan Poe.”

And, of course, he did. As soon as Rose had mentioned it, I recognized the strong resemblance, even to his clothing, and at once set Mr. Allan down as a harmless idolater of Poe’s, so obsessed with the man that he must fashion himself in his likeness, even to his outdated clothing—another of the curious specimens of humanity thronging the night streets of the city.