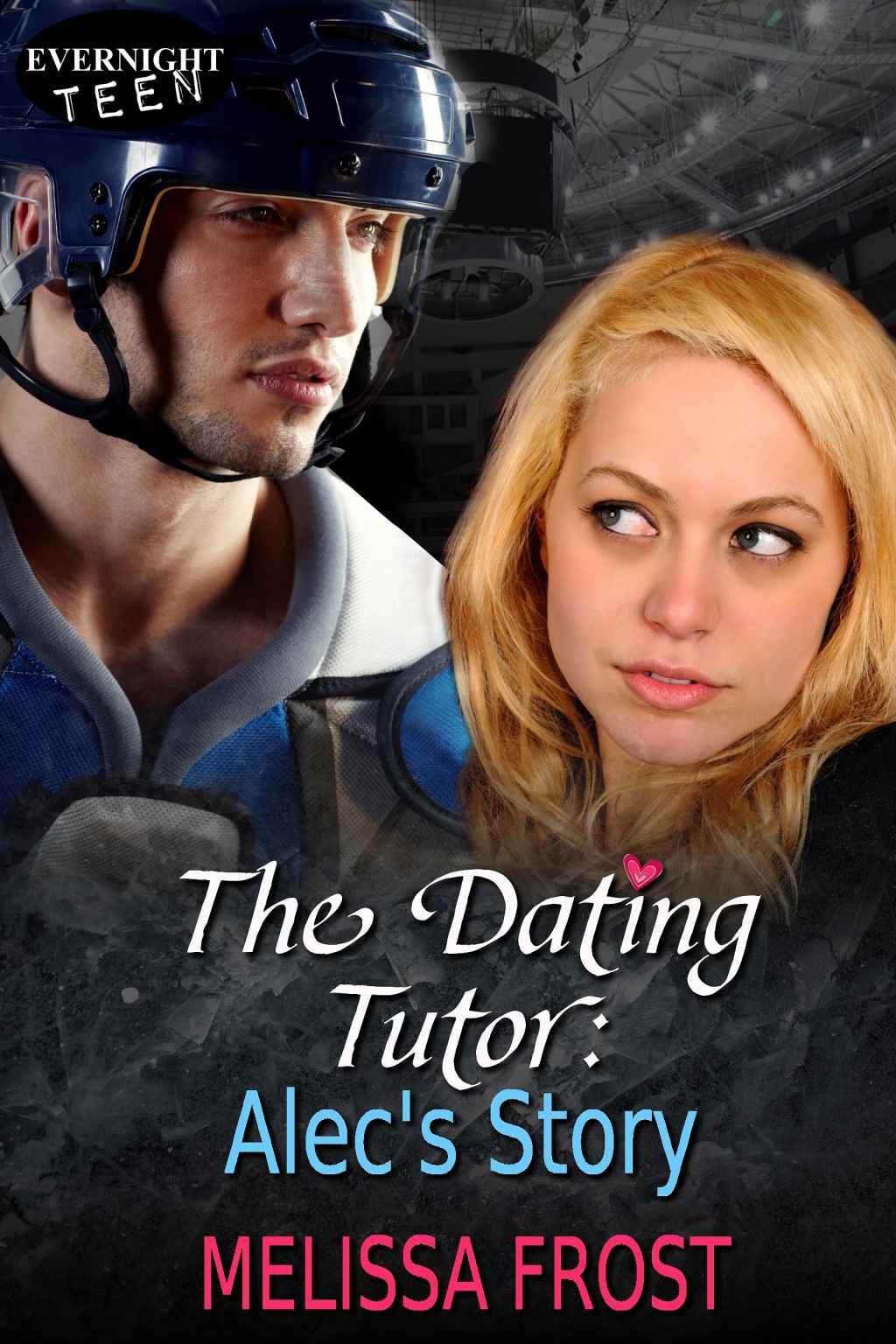 I would like to thank every person who downloaded a copy of the Dating Tutor. Without the amazing response I received to that, Alec’s story never would have happened.

I would also like to thank Evernight Teen for their support as well. And as always, a giant thank you to my husband, Jeremy, for the hours he puts in going over my writing.

Adrenaline coursed through his veins. He could hear the sharp, slicing sound of blades against ice somewhere behind him, but he tuned it out. Alec’s mind was on nothing but the little black puck that swished across the ice in front of him. All that mattered was six ounces of vulcanized rubber and keeping it away from his net.

He hit the boards a moment before the opposition’s player and slashed at the puck, sending it zipping back across the ice to one of his wide-open wingers.  The player he’d beaten to the puck gave him a crosscheck to the back, sending his shoulder into the sheet of glass in front of him.

Alec gave a grunt as the wall shook and he took an elbow to the back. The player who’d hit him, his teammate playing as opposition during their scrimmage, smacked the top of his helmet with a laugh. “Tag. You’re it, Horner.” With that, the player skated off in the opposite direction, chasing the puck back up the ice.

Alec gave a laugh of his own and pushed away from the wall. “Oh, you’re about to get it, Matty,” he threatened under his breath. Ducking his head, he skated swiftly up the length of the ice just in time to keep the puck in the offensive zone for his team. His stick came down at the blue line, and with a flick of his wrist, he passed the puck over to his center.

The center, Derek, took a shot at the net, which the goalie easily stopped and deflected back to his own team. With eager anticipation, Alec waited for an opening. He widened his stance and prepared his body for collision.

He kept Matt in his sights, just waiting for his friend to touch the puck. As soon as Matt came even close to possessing the coveted circle of rubber, he was all Alec’s. His patience paid off not twenty seconds later. Matt received a pass from his team, leaving him open for a hit. Alec charged. He slammed into Matt from behind, sending him face first into the glass.

Opening his mouth for a taunt, the words died in his throat as he caught sight of his next-door neighbor in the stands. A smile involuntarily spread across his lips, and he lifted his hand in a wave. “Ellie!”

Instead of a greeting in return, she flapped her arms about in the air, a frown marring her pretty face. She was obviously trying to convey something to him, but she just looked like Big Bird after one too many energy drinks…or perhaps Big Bird had a drug problem.

Unable to help himself, he laughed. Then realizing he still had Matt shoved up against the boards, he moved back and tapped his friend on the helmet, returning the gesture done to him only a minute before. “You bit off more than you could chew, Matty.”

Matt laughed and playfully shoved Alec’s shoulder. “I can handle you, Horner. I know where you sleep. Keep that in mind.”

Alec opened his mouth to throw out a mock threat of his own when Coach Grimmly let loose with a shrill blow of the whistle he kept around his neck.

“Alright, boys!” the Coach hollered, waving them over. “Good practice. Good practice.” Tucking his ever-present clipboard under his arm, he clapped his hands in approval. “We play as hard against Leary as we did in this mock-up game, we’ll have no trouble earning ourselves a victory.”

The effect of his words on the team was a united set of smiles. Alec grinned over at Matt, who rolled his eyes, but he had a matching grin on his face as well.

“Hit the showers, boys,” Coach ordered. “That’s all for today.”

Still buzzing with the electricity instilled by a good practice, Alec made his way off the ice and down the rampway that led to the locker rooms. He and Matt clomped awkwardly side by side on their skates until they reached the bench in front of their lockers. Plopping down, he began the tedious task of untying his laces.

“Hey, man,” Matt said as he dropped to the bench next to Alec. “A couple of us are heading out to get burgers after this. You free?”

Alec thought about accepting the offer, but then regretfully shook his head. “I think I’m gonna pass. Ellie stopped by practice. It looked like she had something she wanted to talk about. I’ll probably just eat at her place.”

Matt rolled his eyes. “You eat at that girl’s place more than your own.”

Tossing his skates into his locker, Alec grinned. “Yeah, ‘cause her mom can cook. You’ve been to my house when my father whips up one of his culinary disasters. It’s either crash the neighbors’ dinner table or slowly starve to death on Ramen noodles.”

Slamming his locker shut, Alec snatched up his towel from inside his gym bag. “Besides, Ellie’s cool.”

He could hear the doubt in his friend’s voice but chose to ignore it. “She and her mom keep me fed. That makes them alright in my book.” Not wanting to defend his relationship with his admittedly awkward childhood friend, he loped off toward the showers.

A record seven minutes later, Alec emerged from the showers in a cloud of steam. Most of his teammates were still in their individual, tiny shower stalls that always reminded him of the world’s most bizarre office cubicles. He knew he probably should have let the hot water work some of the tension out of his muscles, as he was always running on pure adrenaline after a practice, but he didn’t want to keep Ellie waiting. She was normally a fairly level-headed girl, one of the many reasons they’d stayed friends throughout the years, so he was interested to see what had her looking as wired as he still felt.

Stripping off his towel, he hastily climbed into his semi-clean jogging shorts and a t-shirt emblazoned with the New York Rangers’ hockey team logo. He probably still smelled like sweat, but he’d done his best in less than ten minutes.

He lifted his equipment bag onto one shoulder and slung his damp towel over the other as he made his way into the hallway that would lead back to the stands. Still trying to burn off some of his excess energy, he jogged up the steps and into the bleachers.

The moment the smattering of students became visible, he picked Ellie out of the crowd. She paced the stands, fretfully chewing on the ends of her sun-kissed blonde hair. He could see the girls behind her losing their patience, as with her every stride past them she hindered their view of the few players remaining on the ice for personal practice.

As he approached, one of them snapped for her to sit down. The expression of surprise on Ellie’s face was almost comical. It was as if she had no idea that someone might actually want to
watch
hockey practice instead of pace in front of the glass.

She raised a hand, he assumed to apologize, when her foot caught on the edge of a seat and she stumbled. He dropped his equipment bag and his hand shot out automatically. “Whoa there.” With a hand on her shoulder, he steadied her to keep her from toppling headlong down the flight of bleachers.

Her relieved breath at his quick save coupled with the way she was clinging to his arm with a vise-like grip brought an involuntary grin to his lips. With his free hand, he snatched his towel from his shoulder and ran it through his hair again, soaking up a bit more of the water. “You’re such a spaz,” he accused.

She opened her mouth to retort when the girls who’d been less than friendly to her both yelled out a greeting to him, both so busy to one-up the other that they didn’t even take into consideration that they’d interrupted his conversation.

Alec’s eyes flicked up to the two girls. They both offered sultry smiles and waggled their fingers at him. He gave them a wave of acknowledgement, though it was half-hearted.  “Hey, Alyssa, Shannon.” It still made him uncomfortable when ‘popular’ girls talked to him. He knew they only socialized with him because of his position on the hockey team. Such pretentiousness always made him uneasy. He never knew where he stood with girls like that, because every moment was a game to them.

Shaking off such thoughts, he returned his attention to Ellie. “So what’s with the frantic, duck-like waving?” Mockingly, he waved his hands about in the air and twisted his lip up in a goofy sneer.

“I’m having a crisis,” she confessed.

He dropped his waving hands at the serious tone of her voice. Perplexed, he absently toweled away a trickle of water that dripped down his forehead. He could not imagine what sort of crisis she had that he could possibly help with. He could barely remember to wash his gym clothes before his next practice.

He stared at her a moment more, trying to keep the horror from his expression.
A girl problem?
What the hell did he know about girl problems? Bending, he snatched up his gym bag and slung it back over his shoulder. “Why are you skulking around the rink like a stalker? Don’t you have any
girl
friends to ask for advice?” He prided himself on keeping his tone light and joking.

“You know I don’t,” she grumbled. “Besides, you know more about girls than anyone I know.”

He arched a brow at that, unsure if he should be insulted or not.

He couldn’t argue with that. Indifferently, he shrugged a shoulder. “What is it you need my help with?”

Ellie’s eyes clouded and her index finger twisted anxiously around a strand of hair. It was a habit she’d had for as long as he’d known her, an endearing little nuance. “Not here,” she practically whispered with a hasty glance at Shannon and Alyssa.

Alec’s eyes narrowed in their direction. He knew his friend didn’t need him to play big brother for her, but it irritated him that the bitch brigade could be mean even to someone as sweet as Ellie. Swinging his bag up higher onto his shoulder, he nodded toward the exit. “I’ll walk you home.”