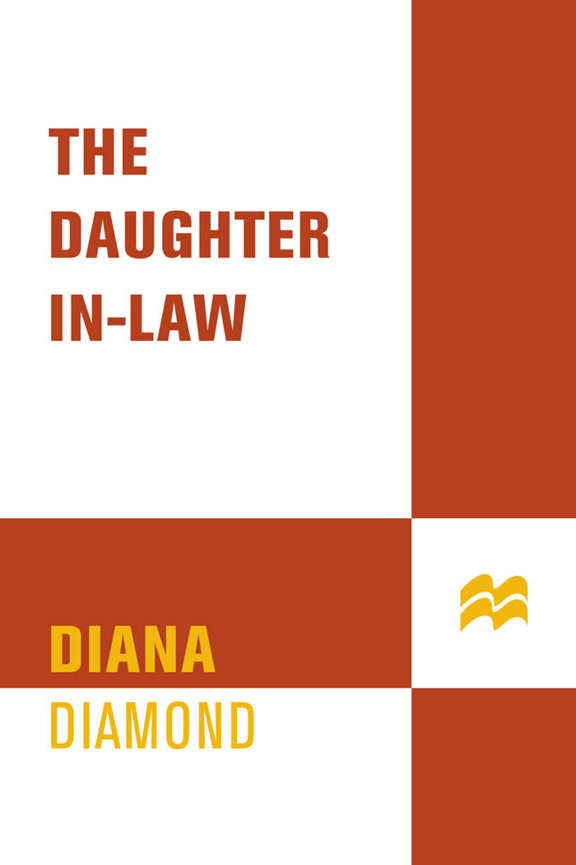 THE DAUGHTER-IN-LAW.
Copyright © 2003 by Diana Diamond. All rights reserved. Printed in the United States of America. No part of this book may be used or reproduced in any manner whatsoever without written permission except in the case of brief quotations embodied in critical articles or reviews. For information, address St. Martin’s Press, 175 Fifth Avenue, New York, N.Y. 10010.

S
HE WAS
frightened. Maybe even terrified. Jonathan could tell from her expression. Staring eyes focused on empty space. Lips pulled into a tight line. The way she rolled her head to crack the joints in her neck.

“First jump?” he asked in a soft voice that was just for her and not intended as a public announcement to the others.

“What?” It took her a few seconds to realize that he had spoken to her.

“Is this your first jump?”

“Not obvious. It just seems that you’re thinking too much. Like you’re trying to make damn sure you haven’t forgotten anything.”

She flashed a quick, darting smile. One that was pure formality without any trace of joy. “Have I?”

“Have I forgotten something?”

Jonathan looked her over carefully. A brand-new helmet without even a scratch, the dark plastic face mask pushed back. A blue nylon jacket fitted with elastics at the wrists, waist, and neck. A parachute on her back with the packer’s tag hanging from the rip-cord and a smaller emergency chute across her belly. A wrist altimeter. Skintight black pants tucked into the tops of soft, suede boots. Some outfitter had sold her the high-price package.

“You have your AAD set?”

“Then you haven’t forgotten anything. You’re allowed to relax.”

She smiled again, this time more easily and with a hint of genuine pleasure.

Jonathan checked his wrist altimeter. “I’m setting the alarm for thirty-five hundred. By then I should see your main chute deploying.”

“Thanks. That’s what my instructor does, not that he’s ever had to remind me. I tend to let the chute go early.”

He smiled. She laughed at the absurdity of her situation. When you jumped out of an airplane you generally didn’t forget when it was time to pull the chute, unless you knocked yourself unconscious leaving the plane or flying into another jumper. That was what the AAD—automatic activation device—was for.

“I’ll be okay,” she said. “Once we get started. It’s the standing around that gets to me.”

He held out his gloved hand. “Jonathan Donner.”

“Nicole Pierce,” she answered. She shook his hand with more strength than he had expected. Her eyes smiled for the first time, shining arcs of blue above high cheeks. “I don’t know why in hell I do this. I spent the last half hour in the ladies’ room upchucking my morning coffee.”

“It gets easier,” he assured her. “And the thrill never goes away.”

“You’ve been jumping for a while,” she said, putting words to the obvious.

“Yeah! Nearly ten years. All over the world.”

“All kinds of altitude. Out of balloons. Jets.”

“Then why are you making this dinky jump?”

Jonathan laughed. “There are no dinky jumps. And no matter how many times I go up, I still toss up my coffee while I’m getting dressed. I just don’t let it bother me anymore.”

She held eye contact, her expression accepting his friendship. “Thanks,” she said. “I’m going to be okay.”

The pilot sauntered out of the shed, bouncing to the beat he was hearing through his CD headset. He didn’t look up at his customers until he was right on top of them. “All set?” he asked, and without waiting for an answer he jumped into the doorway hatch of his De Havilland Twin Otter. His passengers climbed aboard behind him.

There were six making the jump. Nicole was the only woman. Jonathan was jumping with a close friend, Ben Tobin. The other three were oversize Navy SEALs, treating themselves to a postman’s holiday. They talked quietly in a language all their own. The
SEALs strapped themselves into the sling along the airplane’s right side. Ben Tobin was nearest the door on the left side, then Jonathan, and finally Nicole closest to the pilot. The only sounds were the safety harness buckles snapping closed.

The pilot clicked on the intercom. He started a word, paused, and then clicked off. When he returned, he had his script in hand. “We’re climbing to ten thousand feet, which shouldn’t take more than twelve to fifteen minutes. Then we’ll cross downwind over the jump area so you can find your marks, saunter back, and then make a jump run. Okay?”

There were grunts of approval.

“Anyone changes his mind,” he added, “can ride back with me at no extra charge.” He laughed at his own sense of humor. None of his passengers cracked a smile.

The left propeller began to turn cutting blinking shadows in the morning sunlight that was streaming through the round windows. The pitch of the turbine whine eased up the scale until the roar of ignition drowned it out. Then the right propeller started to swing.

“Anyone ever flown this crate before?” one of the Navy men asked.

Ben nodded. “It’s a good jump plane,” he said to no one in particular.

“Is he kidding?” the SEALs went on. “Ten thousand feet in twelve minutes? Looks more like it could take twelve weeks.”

Jonathan had logged dozens of jumps out of Twin Otters. They were quaint-looking planes with spars supporting the wings and a landing gear that didn’t retract. But they climbed quickly and turned on a dime. “It’s a big door,” he answered the cynic across the aisle, “easy to get out of, and once you jump the plane doesn’t make a lot of difference.”

Nods from the SEALs. What did it matter if it took a few extra minutes to get to altitude? Once you went out the door no plane was better than any other. They settled into an anxious silence.

“You all right?” Jonathan asked Nicole, leaning close so that it was their private conversation.

She nodded. “As soon as we get out. It’s the waiting that scares me.”

“I’ll be fine,” she insisted. But within a second she suggested, “Maybe I will go ahead of you.”

Jonathan nodded. Then, just to reassure her, he reached over and squeezed her hand. She squeezed back gratefully, but she didn’t look at him. Her eyes seemed fascinated with the toes of her boots.

With both engines growling, the Otter bounced across the grass and out onto the gravel runway. The pilot didn’t pause to check anything, but simply pulled the throttles to a melodic howl. The plane rushed ahead and within a few seconds lifted into the air. The SEALs exchanged approving glances. They were impressed.

“He doesn’t waste any time,” Nicole said, nodding toward the pilot. Her fear was leaving her as the plane climbed. Like she had said, it was the waiting around that made her nervous.

“Where are you from?” Jonathan asked, trying to start a normal conversation.

“New York. I’m a stockbroker. Well, at least I’m going to be a broker. Right now I’m a broker’s assistant who gets to talk to customers.”

“You’re in the market? That would scare me more than jumping out of airplanes.”

Nicole nodded. “You know, now that I think of it I get sick getting dressed for work. I guess it’s the same dread of putting your life on the line with every move you make.”

“Well, when the market crashes and it’s time to jump out the window, you’ll already know the routine.”

She laughed out loud, and then put her hand over her mouth as if she had caught herself laughing in church. The three SEALs were looking at her with disapproval. Skydiving was serious business. Leave it to a woman to trivialize it, they probably thought.

The plane banked into a tight turn and continued climbing into the heading that it had just come from. The pilot was carving his own switchbacks, like climbing a road that turned back and forth up the side of a mountain. The Otter was holding its steep angle and going up fast, promising to beat the twelve-minute estimate.

Jonathan thought she might be attractive, but with the parachutes she was wearing and the straps across her chest and thighs, all he could do was guess. She had a nice smile and very expressive eyes. Her voice sounded a bit like music. The shape of her legs was obvious in the skintight pants and she seemed to be on the slim side
of curvaceous. But he had to fill in the rest from his imagination. Her hair was probably light given the complexion of her cheeks and the color of her eyes, but it was hidden beneath her helmet. Her figure was probably good. Great legs generally went with a well-turned butt, and if all that worked then the rest couldn’t be too shabby.

“What do you do?” Nicole suddenly asked, resuming the conversation that Jonathan had started.

“Jump out of airplanes,” he answered with a mischievous grin. “Race sailboats, do some scuba diving ...” His tone indicated that the list wasn’t all-inclusive.

“And what do you do to support all these adventures?”

He shrugged. “As little as possible. I have a job . . . in banking. But that’s what really makes me sick.”

Now Nicole had the mischievous smile. “You don’t look like a banker. At least none of the bankers I’ve met.”

Jonathan preened his shaggy mustache. “You mean this?”

“I suppose so. Aren’t bankers supposed to be painfully shaved and completely buttoned-down? I thought displays of personal affectation were considered fiscally irresponsible.”

“That’s why it makes me sick. But I give it five days a week and then I escape on the weekends.”

She looked suspicious. “This is only Tuesday.”

“True, but a drive into New Jersey for a quick dive out of an airplane isn’t what I mean by escape. This is just like taking a long lunch. Escape is when I really get away. Fly someplace on a Friday and come back on Monday.”