Read The Daughters of Juarez: A True Story of Serial Murder South of the Border Online

The Daughters of Juarez: A True Story of Serial Murder South of the Border 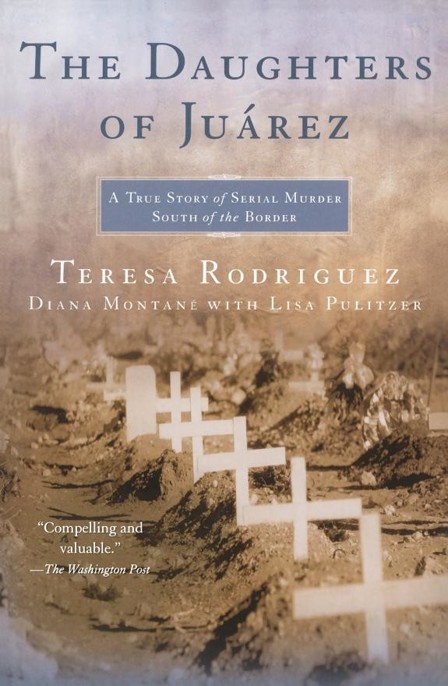 All rights reserved, including the right to reproduce this book or portions thereof in any form whatsoever. For information address Atria Books, 1230 Avenue of the Americas, New York, NY 10020

ATRIA
BOOKS is a trademark of Simon & Schuster, Inc.

Visit us on the World Wide Web:

To the murdered women of Ciudad Juárez,
State of Chihuahua, México
To Victor, Julian, and Tony,
without whose love and support
this book would not have been possible
Contents

Chapter One A Corpse in the Sand

Chapter Two A Bag of Bones

Chapter Four The Devil Is in Juárez

Chapter Five Changing of the Guard

Chapter Six One and the Same

Chapter Eight A Ray of Hope

IN 1993, LIFE IN JUÁREZ, MEXICO, began to change for many young women. One by one, their violated and mutilated bodies began to appear in the vast desert areas that encircle the city. At the time of this book's publication, the killings continue and there remain dozens of unresolved cases. Although some say the dead can speak, the families of the victims ask themselves if anyone is listening.

Among the theories, insiders and advocates for the victims have suggested that a serial killer or killers may be on the loose; that members of Juárez's powerful drug cartel and a handful of prominent buisnessmen on either side of the border in conjunction with police may be responsible for a number of these crimes. They believe that some people in power are more interested in covering up the crimes and shielding the perpetrators than in resolving the cases in any way that can bring peace of mind to many bereaved families.

I am Teresa Rodriguez, anchor and investigative reporter for Univision, the largest Spanish-language television network in the United States. I traveled to Juárez, Mexico, on four separate occasions, both with my news production team and on my own, to carry out my investigations.

My own family emigrated from Cuba when I was nine months old. While I grew up with few luxuries, that fact never seemed to matter. My mother could sew, so I never lacked for new clothes. I was always told I could be anything I wanted to be if I just set my mind to it. The women I am going to tell you about are fighting for that same right, but their struggle is marked by a trail of blood and their abusers remain at large despite repeated calls for justice.

We expect fair trials in the United States of America. And yet even in our own country, we know that justice is not always served. However, as you read this book, you will see that in the state of Chihuahua and perhaps throughout Mexico, many of those rules that we take for granted don't exist. People are living in substandard conditions, and political corruption reigns.

In the following pages, you will read an incredible and disturbing account of serial murder, police corruption, and political indifference. Drawing from a variety of sources, including interviews with law enforcement personnel, civil rights leaders, victims' families, local journalists, and others, I bring you a firsthand account of the atrocities against women that are occurring just south of the U.S. border.

Among the dozens of interviews I conducted while in Mexico was an exclusive one-on-one sit-down with the alleged mastermind behind the murders, Egyptian chemist Abdel Latif Sharif Sharif, who died in jail proclaiming his innocence. His allegation that members of the Chihuahua State Police Department, working in concert with high-ranking government officials, narcotraffickers, and perhaps even wealthy businessmen crossing into Mexico from the U.S. city of El Paso, are behind the killings is not without merit and, in fact, has been bolstered by inquiries conducted by representatives from the United Nations and Amnesty International.

Yet, despite the findings of these studies, the formation of numerous commissions, the appointment of federal special prosecutors, and the undying efforts by local women's rights activists to right the wrongs, the abuses against Mexico's young women continue seemingly unabated.

THE HOWLING OF THE COYOTES is nothing compared to the stillness that falls on the desert once it swallows its prey; when the sun sets and one life stops in Juárez. And it isn't the coyotes that strike, with the ferocity and stealth of predators, nor any animal that inhabits the arid terrain. This marauder walks among his victims, examining their every move, perhaps even befriending them. And when she least expects it, he unleashes a deadly sting, like the venomous scorpion common to this parched region, violently raping, mutilating and slaughtering his prey, leaving her to die among the tumbleweed knowing her desperate cries for help will be pointless and trackless. No one will hear her in this barren wilderness. And when his job is done, the beast rejoices. In his warped and perverted mind he is confident that soon, she too will rot away, like the other daughters of Juarez becoming one with this desolate waste-land.

The area was once a deep chasm between two mountain ranges rising out of the desert. Spanish explorers baptized it El Paso del Norte, the Pass of the North. In 1821, when Mexico won its independence from Spain, El Paso del Norte and what is now the American Southwest became a part of the Mexican nation. Twenty-five years later, a treaty between Mexico and the United States would set the boundary between the two countries, creating two border cities: El Paso, Texas, on the north bank of the Rio Grande and Ciudad Juárez on the south side.

The Mexican border town was named after Benito Juárez, Mexico's revolutionary hero. In an autobiographical account entitled "Notas para mis hijos" that he left for his children, he tells he was born on March 21, 1806, in the village of San Pablo Guelato in the state of Oaxaca. Orphaned at a young age, he worked the fields. His uncle, who wanted him to study for the priesthood, the only venue left for poor people and especially Indians, taught him how to read. The young man left his home for the capital, where he studied theology. Eventually he became involved with the law-making processes of the country, rising to chief justice of the Mexican Supreme Court and later, the president of the republic. Today, the monument in his honor is a focal point in the middle of a large plaza in downtown Juárez.

Not too far from there, in neighboring El Paso, at a point where Texas, Mexico, and New Mexico meet, a massive monument of Christ on the Cross, stands atop a 4,576-foot summit. This image of Cordova cream limestone was to be one of the first I would see as I looked out from my hotel window in El Paso. I couldn't help but wonder how many women had died looking up toward that Christ, their bodies broken, pleading for mercy.

As I embarked on my assignment, I asked myself if city planners ever envisioned the crime and violence that the maquiladoras might bring as the growing job market lured thousands to the area making this border town a gold mine.

Now, as I stood before the statue of the Mexican leader in downtown Juárez, where many of the girls were last seen transferring from bus to bus to go home or to work, I wondered if this Mexican visionary ever fathomed that his beloved city would become such an abyss of murder and injustice. Perhaps that's why some swear that they've seen Benito Juárez weep.

Chapter One
A Corpse in the Sand

I don't feel safe because once I step out on the street, I don't know if the second step I take will be my last.

RAMONA MORALES hurried from her small concrete house in Juárez, Mexico, just after 8:30 p.m. on July 11, 1995. She was determined to be at the bus stop when her daughter, Silvia, arrived after a long day of school and work.

In the last thirty-six months, there had been a series of brutal sexual attacks against young women in and around the Mexican border city, all of them fatal. Ramona wanted to make sure her teenage daughter didn't become the next victim.

She had noticed short stories about the killings in the newspaper. Many of the victims had disappeared on their way to or from work, often in broad daylight; their lifeless remains were found weeks, sometimes months later, in the vast scrublands that rim the industrialized border city. What the newspapers hadn't reported would have frightened her even more. The victims bodies exhibited signs of rape, mutilation, and torture. Some had been bound with their own shoelaces. Others were savagely disfigured. One young girl endured such cruelty that an autopsy revealed she had suffered multiple strokes before her assailant finally choked the life from her.

The victims were young, pretty, and petite, with flowing dark hair and full lips. All had been snatched from the downtown area, while waiting for a bus or shopping in stores. An alarming number were abducted en route to their jobs at the assembly plants, known locally as
maquiladoras,
that made parts and appliances for export.

The once unremarkable border town was fast becoming the fourth-largest city in Mexico with the opening of hundreds of these export factories. Locked behind towering gates and manned security booths, these contemporary assembly plants, many with neatly tended greenery and lush lawns, seemed a stark contrast to the prickly cacti and blowing tumbleweed indigenous to the arid region. Eighty percent of the factories were American-owned and produced goods for major U.S. corporations including Lear, Amway, TDK, Honeywell, General Electric, 3M, DuPont, and Kenwood. They had been built in response to NAFTA, the North American Free Trade Agreement, signed by the United States and Mexico in 1993.