Read The Dead Slam: A Tale of Benevolent Assasination Online

The Dead Slam: A Tale of Benevolent Assasination 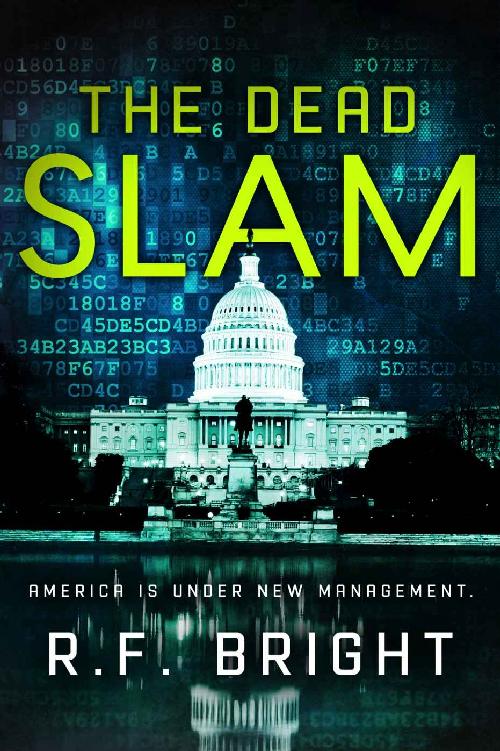 N
o part
of this book may be reproduced in any form or by any electronic or mechanical means, including information storage and retrieval systems, without written permission from the author, except for the use of brief quotations in a book review.

All characters in this work of fiction are inventions of the author and in no way represent actual individuals. Unless you are currently living in the year 2051, you are not in this work.

“You can’t drink all day,

unless you start in the morning.”

T
he first body
was found frozen to a gigantic boulder in the Allegheny Mountains.

“Over there!” yelled Max Burdock, his young voice vanishing into the pelting snow. “Over there! Look!”

His father, Fred, lifted a furry earflap, struggling to hear what the teenager was saying.

Max raised his deer rifle to arm’s length and pointed it at a spot about fifty yards out on a football field-sized plateau buried in colossal shards of black granite. Through curtains of delicate white flakes, a tiny puff of bright red glared back at them. Max had promised his father he’d never go out on this lake of saw-tooth boulders that’d been falling here since the first Ice Age. Many stood five stories or more, stabbed straight into the ground and pointing up at two towering spires on the cliff above –- two six-hundred-foot tall stone bishops.

They pushed through knee-deep snow, scaling smaller boulders, skirting the giants, and soon landed before a body, completely iced over, reaching up the side of a fifty-foot granite splinter as though climbing. A spiraling wind had blown a lacy snowdrift up the victim’s neck and cheek. He’d been here a while.

Max had seen plenty of dead people, but this was troubling. There was no reason for anyone to be up here. Not in March, and certainly not in an expensive hiker’s outfit. Max and Fred were here to hunt, to feed their village. But this guy wasn’t from around here; he was too well dressed. A coat like that could only be gotten in one of the Walled Cities.

In better times and milder weather Max would have walked away, but times were tough and it was cold as hell. He tapped the ice cocoon with the butt of his rifle and turned sheepishly to his father, who looked uneasy.

Fred removed his makeshift goggles, slapping at a puff of snow blowing in his face. “Never saw this before,” he said, spitting out a few icy flakes.

Max wiped his hand across the ice covering the dead man’s head. “But he’s just as dead as if you had.”

Fred snapped his rifle to the ready. A huge snow eagle lifted off an outcropping and circled. A magnificent but common sight in one of the most remote places in what now passed for civilization; the Allegheny Mountains of Western Pennsylvania, about a hundred miles north of West Virginia.

Fred’s face twisted into a questioning frown; he knew this was grave robbery, but nodded anyway.

Max pulled his skinning knife and chipped away with all the reverence he could muster. Once the glossy surface broke, the ice came off in sheets and the frozen torso was quickly exposed. The dead man was at least six feet four and seemed almost alive, slanting up the massively indifferent boulder. A moment of death sculpted in flesh and bad luck, or maybe worse.

Max peeled off his homemade fur gloves and ran his hand over the coat’s lavish red fabric. He tossed Fred a toothy grin, which he immediately choked back, then wrestled the huge parka from the rigid corpse and pulled it on over his tattered Navy pea-coat.

Fred knew that no matter how many sweaters his son wore beneath his old pea-coat, his shivering never stopped. But now he was wearing a real winter parka, a good one, a rich man’s coat: down-filled, heavy-duty zippers with big leather pulls, huge pockets, and a fur-lined retractable hood, adjustable in every way that mattered. Max opened his arms to show Fred how well it fit, dancing a tight circle, his face aglow in the shared hope of his never suffering from the cold again.

Fred’s misgivings vanished as he cast a measuring look at Max, and thought of her. The boy’s gray-blue eyes, her eyes, beaming out from a halo of fur, simply clobbered him. His friendly face, crisscrossed with scars and wrinkles as coarse as the Sahara, hid a wounded heart. Max’s mother had been drafted into the Marines in 2044 and hadn’t been seen in eight years, since Max was nine. Fred, himself a war veteran and reverent man of no particular faith, simple and pragmatic, knew that robbing the dead was wrong, but allowing her son to suffer needlessly wasn’t just wrong — it was stupid. She would have said yes. He saw her in everything Max did, on good days.

Max checked the inside pockets and discovered the zip-out lining. “Man-oh-man,” he said. “This is a really good one. Good as it gets.”

“How would you know?” said Fred, trying to jump-start a round of insulting banter.

Max aimed a silly grin at Fred, stretched his neck in a theatrical arc, and said in his best ham-actor voice, “That’s sad, old man. Just plain sad. I only know what you taught me. What’d you expect?”

Any good fortune that came to Max paid Fred double. This boy and a lost love were all that mattered to him, but it was his turn to say something inappropriate. “I expect absolutely nothing. That’s the truly sad part . . . and the key to good parenting. Low expectations.” He turned to look for the midday sun. It was just a bright smudge low in the inky clouds at this altitude. He glanced back at Max, then up the spectacular twin spires. “This place was hit by a meteor — I’d bet anything. How else could it get shaped like this?”

Max had agreed to Fred’s hypothesis a thousand times, but made a display of sincere agreement. He recoiled as Fred clapped both meaty hands on his shoulders, tugged at the sleeves, shook him mercilessly, pointed out a rip in the elbow, then dusted him off with a few harsh slaps about the head and shoulders. Fred was old, but he was big and could out-work most men half his age. “It’s colder than a witch’s tit in a tin brassiere.”

Fred embraced Max’s sarcastic review. “We should at least find this guy’s people,” he said, and headed home, to the Village of Lily. Max stuffed his fur hat, which seemed so inelegant now, into a huge pocket, adjusted his new hood, and tagged along, trying not to make too much of his good fortune at a dead man’s expense. However anonymous.

As the coat warmed, the faint scent of bay rum and lime drifted into the pure mountain air — just when Max thought it couldn’t get any better. He’d never smelled anything so delicious. This was as close to the world within the Walled Cities as he’d ever been. The sophisticated red coat enveloped him in something entirely new and mysterious. The questions it posed were tantalizing, its untold story dark and alluring. But despite this great good fortune, Max’s zeal was dampened by a wooly apprehension – this coat was going to cost him something.

He just knew it.

After the Fireworks by Aldous Huxley
Shiloh by Shelby Foote
Deadly News: A Thriller by Zooey Smith
Milk for the Billionaire (billionaire domination and lactation erotica) by Francis Ashe
Without a Trace by Lesley Pearse
Hooking Up by Tom Wolfe
The Grandpa Book by Todd Parr
The Sorceress by Allison Hobbs
The Last Man in Russia: The Struggle to Save a Dying Nation by Bullough, Oliver
Spiritual Slavery to Spiritual Sonship by Frost, Jack