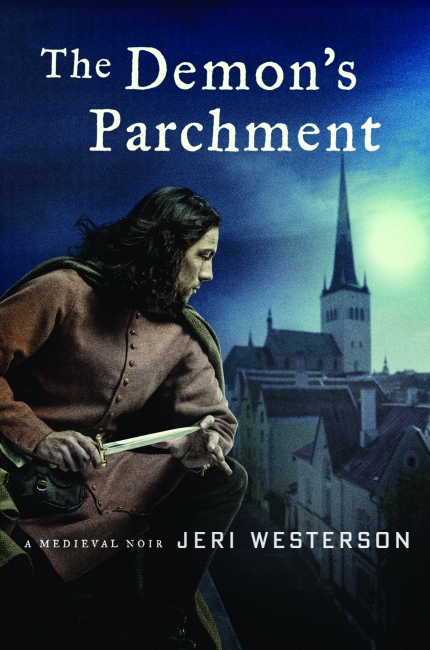 Serpent in the Thorns

To my personal knight,
Craig, who slays all my demons

There are always a great many people to thank, particularly when research is involved. It’s not something you can accomplish alone. Thanks go out to Gillian Pollack and the late Reva Brown for helping me with post-expulsion Jewery; to Henk T’Jong for the French translations; to my Vicious Circle of Ana Brazil, Bobbie Gosnell, and Laura James for helping me whip the plot into shape; to my ever patient husband, Craig; to my agent, Joshua Bilmes; and my editor, Keith Kahla. Thank you all.

“He’s still out there.” Jack Tucker leaned his head and shoulders out the window.

“Close the damn shutters,” growled Crispin. “It’s too cold in here as it is.”

“Sorry, Master,” said the boy, doing as bid. His ginger hair was dusted with snow. “It’s just that that man is still out there, looking up at us. Makes me a bit shivery.”

“The cold will do that.” Hunkered by their meager fire, Crispin held one hand toward the flames. The other was curled around a bowl of tart wine.

Crispin drank the bitter liquid. Winter did not seem to bring him as many clients as the warmer months. Perhaps fewer crimes were committed in the winter and a “private sheriff” was not in the family finances when it came down to it.

The small room offered little comfort. Its few bits of rented furniture—a chair, a stool, a rickety table—stood in the center of unadorned walls. Crispin’s pallet bed was shoved against the wall
near the hearth, and on the opposite side of the small fire lay a pile of straw, the place Jack tucked in at night. Four strides would take him to a chest by the door, which held Crispin’s change of stockings and braies and his few writing implements. He was lucky to have two windows, one facing the back garden and the one Jack had been leaning out of facing the Shambles. But “luck” was a relative term. Today, with London chilled like a frozen lake, two windows only offered more opportunities for an icy draft.

“Let me see, then.” Crispin rose with a bone-weary sigh and set the empty bowl aside. He joined Jack by the window, but instead of throwing open the shutter, he peered down through a crack in the wood that he usually kept stuffed with a rag.

Below, in the snow-painted street, stood a man in a long black gown. His dark beard was salted by time as were his bushy brows. His head was covered by a tight-fitting felt cap with flaps that covered his ears. And he was looking up at Crispin’s window expectantly, ignoring the occasional passerby in the street.

“He certainly seems determined about something,” said Crispin.

“Then why don’t he come up?” asked the boy, twisting his cloak across his chest.

“A very good question. Why don’t you go down and find out.”

“Me?” Suddenly the mystery did not need solving so urgently. “He might be a madman. He’s been there a straight hour and he hasn’t moved.”

“All the more reason to see what he wants. Go on now, Jack. If apprentice you wish to be, then you had best obey your master.”

“I knew that would bite me in the arse,” he grumbled. Securing his cloak, he marched toward the door. He took a firm grip of his knife sheath and looked Crispin in the eye. It was moments like these that Jack seemed so very young. Of course it was true. At twelve, his cheeks were still plump from childhood, and though his voice cracked a bit, it hadn’t yet deepened. “If I don’t come back, it’s your fault.”

“Shall I keep watch? Is an old man so much of a threat to you?”

“I’m going!” he replied sullenly, and slipped through the door.

But Crispin did keep watch through the chink, and saw Jack appear cautiously below. The man tore his gaze at last from Crispin’s second-storey window and stared at Jack. The creak of cart and hiss of wind made it impossible for Crispin to hear their quiet exchange, but he could well tell by Jack’s pantomime what he told the man. He appeared to be entreating him upstairs, but the man shook his head. It seemed that he was content to stand in the snow and merely gaze up at the window.

Footsteps at his door told him Jack had returned. The door opened. “Bless me,” said Jack, shaking the flakes from his cloak and stamping at the threshold. “He
does
want to talk to you, sir. But he will not come up.”

“No, sir. He seems most stubborn about it. I told him that the Tracker was not in the habit of meeting strange men in the cold streets instead of his warm lodgings.”

No, indeed. He had no wish to leave the feeble warmth of his room, but the larder was decidedly bare. “It seems I have no choice but to humor this miscreant. Tell me, Jack. How did he seem to you? What was his character?”

He knew the boy liked to show off his growing skills, and on cue, Jack puffed up and hooked his thumbs in his belt. “Well, now. He is a man of middle years, well-spoken, neat and clean.”

“Foreign. French, I think. His speech has got a light touch, if you get my meaning. He seems like a gentleman.”

“Then he’ll have the coin. Very well. I shall meet this mysterious man on the street.” Crispin buttoned his cloak tight, pulled his chaperon hood up over his head, and yanked open the frost-bitten door.

He trotted down the narrow stairwell, mindful of the icy last
step, and when he reached the lane, he studied the man with steel-gray eyes. The man turned and measured Crispin but did not approach. Instead, he bowed. “Do I have the pleasure of meeting the great Crispin Guest?” The accent was soft but unmistakably French.

“ ‘Great’ is a matter of perspective. But Crispin Guest I am. And you, sir? You find your occupation by staring at my window. To what end?”

The man took a step closer. Crispin eyed his gown, a dark woolen robe cut in solemn lines and trimmed with black fur. His skin was pale and his beard grew past his chin but was not long enough to graze his chest. There, on the breast of his gown, Crispin observed something unexpected: a round, yellow patch carefully stitched into place.

The man saw Crispin eye it but did not comment. “My name is Jacob of Provençal.” He stepped closer. “I am a physician. From the continent.”

The man continued. “I have heard others speak of you, of this ‘Tracker.’ You find things. Lost things.”

“Indeed. It is my bread and butter.” His stomach took that moment to growl. The tips of his ears warmed.

The man smiled. “
En effet
. I am looking for a most important object. A dangerous one. It must be found before, well, it simply must. I beg that you come to my lodgings and we shall discuss it there.”

Crispin turned an eye to his window, knowing well Jack was spying on them. “And where are your lodgings?”

He hadn’t meant to, but Crispin stiffened. The man watched him with a judicious eye. “I . . . have also heard,” the man said carefully, “that you may not be welcomed there.”

“An understatement. It would be difficult my going to King
Richard’s palace. But I know of another place that might suit. Someplace closer. Will you permit me to lead you to an alehouse?”

The man hesitated. He pressed a pale finger to his lip and glanced up at Crispin’s shuttered window before he lowered his head. He muttered something under his breath and lifted his face. “Very well, then. Lead me.”