The Department of Lost & Found 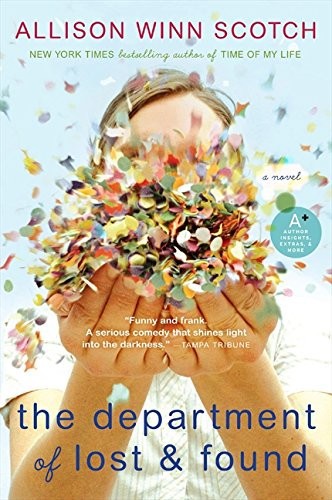 For Lizzie. I still hear you roar.

THE ELECTION WAS in six weeks and counting, and admittedly… 3

It all happened very quickly, which is why, I think… 13

It had started raining by the time I made my…

I had the dream again. The same one I had…

I sat at my desk, struck by his comment. I…

The first Tuesday in November, just as I had on…

I cannot believe that you got a dog,” Sally said…

The next weekend, Sally, Lila, and I set off for…

I rolled my eyes at the computer screen. So now…

Nobody particularly enjoyed the annual office holiday Christmas party, but…

I am woman, hear me roar,” I thought to myself…

THANK GOD I’M wearing my wig. That was literally my…

I got to work early enough the morning of my…

I realize now that I’ve marked my time since my…

Two days after we got back, a week into my…

I cannot believe her,” I said to Jake, over Sunday…

If I hadn’t experienced it myself, I’d never believe it…

What do you mean, she’s not in the office today?…

On Wednesday, the day before Jake and I were set…

There were no skies more sunny than those off the…

When we met at the spa for hair and makeup…

And so I begin. Janice, my cancer therapist, suggested that it might be healthy for me to channel my
feelings onto paper instead of channeling them inward and sitting around feeling sorry for myself, which I’ve spent a great
deal of time doing in the past few weeks. So I’m going to give
this diary thing a shot. Though, really, who can blame me for
moping? I was diagnosed with wretched cancer, my boyfriend
dumped me, and the office won’t return my calls.

Of course, when Janice suggested this little hobby, I told
her I had nothing to write about: My cancer was certainly
out—spending hours in a darkened bedroom with a pen in hand
mul ing over my mortality wasn’t an option. But then, I was
4

a l l i s o n w i n n s c o t c h
lying on my couch staring at the ceiling, hearing the radio but
not really listening, when I heard Jake’s voice come over the
airwaves. Jake. He of my all-consuming love. He was singing
about lost love, and I sunk into the pil ows and pul ed the chenille
throw blanket over my legs and wondered if he were singing
about me. When the DJ spun a new song, I sat up with a start.

You see, Diary, in the weeks since Ned up and dumped
me, it has occurred to me that I’m not entirely sure what went
wrong between us. And when I further pondered this situation,
I realized that I wasn’t sure what went wrong in just about all
of my prior relationships. And when I pondered this one step
more, I realized that I must lack any or all bits of self-awareness.

I mean, what sort of person walks away from a relationship
and doesn’t even devote a moment to the root of its ending?

Sure, I spent time mul ing over the ending itself—the overdra-matic epitaphs, the wasted tears—but not necessarily the why
behind it.

So with that, Diary, I’m off to retrace the steps and missteps
of my past: Yes, I’m going to track down the five loves of my life
and see what I might glean, who I’ ll be, where I’ ll end up. Who
knows where it will lead? But you’ ll be along for the ride, Diary.

t h e e l e c t i o n wa s in six weeks and counting, and admittedly, being out of the action was beginning to take its toll. Ever since law school, I’d only known one thing: work. Higher, stronger, more. Which is how I’d ascended to my pivotal position as the great Senator Dupris’s senior aide. All by the age of thirty, which
The Department of Lost & Found

I turned in early September, just before the world as I know it otherwise imploded.

Before said implosion of my world, I was a woman about town.

I’d be parked at my desk by 7:30 a.m., already having run four miles, chatted up the Starbucks barista, and scanned the morning headlines. The next twelve hours would be a blur: The day would be spent cajoling aides, seducing lobbyists, caressing the media, or demolishing anyone who stood in the senator’s way. If I were lucky, in the evenings Ned and I would split Chinese takeout around nineish, and after checking my e-mail one last time, I’d crash on my four-hundred-thread-count sheets, only to start it up all over again the next morning.

Now? Well, here’s an example of what I did today.

8:28 I consider vomiting, so roll back over onto Ned’s side of the bed and pull my sleep mask back down.

8:31 I can’t ward off the effects of Friday’s chemo treatment any longer, despite my heavy use of the antinausea drugs that Dr. Chin, my oncologist, prescribed, so I rush to the bathroom just off my bedroom and lean over the toilet while my body rebels against the very medicine that’s trying to save it.

8:35 I brush my teeth, wipe the sweat off my brow, and climb back into bed, swearing that I’ve never hated anything more in my life than this cancer, which, if you were privy to several of my professional entanglements, 6

9:26 The phone rouses me from bed, and I assure Dr. Dor-ney—well, Zach, I should really call him (or Dr.

10:06 My eyes (and brain, perhaps) glaze over as I become entranced with Bob Barker and his lovely bevy of beauties.

10:11 The antinausea tea that I’ve quickly grown to rely on winds its way through my system, so I nibble on a banana. It’s only been three weeks (or one chemo cycle), and I’ve already lost five pounds.

10:54 Despite feeling rather bulletproof with my
Price Is
Right
expertise, I lose the vacation to the Bahamas and the Ford Thunderbird in the showcase showdown. Now what do I have to live for?

The Department of Lost & Found

What’s Up with Taylor?

Saw the paper this AM. What’s up with the leaks about Dupris’s tax returns? You know that Councilman Taylor will do anything to win this election and put her out of the job. He’s a slimy bastard—and a state councilman at that!

Where does he get off? What are you guys doing for damage control?

12:34 I realize that my BlackBerry will alert me to my e-mail, so decide to take a walk.

1:37 The flukishly mild late September air warms my body from within, and as I sit on a bench in Central Park, I’m surprised to discover that I am not overcome with a fit of shivers. The chemo has turned my skin into virtual Saran Wrap, as if the drugs aren’t just killing the lethal cells within me, but eating away at my protective coating as well. I inhale the sunny air while watching a group of new moms “strollercize” in front of me and wonder if I’ll ever have kids. The pit of my 8

stomach rises up, as I remember that Dr. Chin told me that the odds of a Stage III cancer patient maintaining her fertility are not high. I then further remember that the odds of survival aren’t that high, either—about 50/50, give or take—so I push the ruinous, devastating thoughts from my mind and pour my energy into walking the half mile home.

2:07 I finish the banana and become embroiled in the dis-turbingly weird plotline of the soap opera
Passions
, which involves a witch, a puppet, and a long-lost sister.

3:11 Plodding to my computer, I e-mail myself to ensure that my e-mail and BlackBerry are working properly.

4:55 The phone once again shakes me awake, and I groggily say hello to Sally, my best friend, who has returned from Puerto Rico, where she is planning to marry next spring. I assure her that I’m feeling fine; I’m just a bit stir-crazy. Senator Dupris mandated that I take time off from work during the first few chemo cycles so that I won’t run myself ragged, but it’s not the cancer that’s killing me, it’s the boredom. Thus my
Passions
addiction. I fill Sally in on my diary plan and ignore her when she states, “Returning to the scene of the crime is almost always dangerous. I wrote an article on this once, and psychologists say that revisiting history can do more damage than good.” I respond that despite the
The Department of Lost & Found

fact that she is a freelance writer (primarily for women’s magazines) and thus well versed in just about every subject and study known to man, she does not, in fact, know everything, and therefore, I’m planning on completely ignoring her sage counsel. She doesn’t argue, instead saying that if she has to write one more insipid story on lipstick, she’s going to jump off a bridge.

Pretty Leslie by R. V. Cassill
Beauty and the Billionaire (BILLIONAIRE BOYS CLUB NOVEL) by Clare, Jessica
Operation: Tempt Me by Christina James
Whirlwind by Chase, Layla
I Always Loved You by Robin Oliveira
Locked by Parker Witter
Shots in the Dark by Allyson K Abbott
Goddess Interrupted by Aimée Carter
Once Was: Book One of the Asylum Trilogy by Miya Kressin
Leah's Seduction: 4 (Gianni and Leah - Leah's Seduction) by Trent, Emily Jane