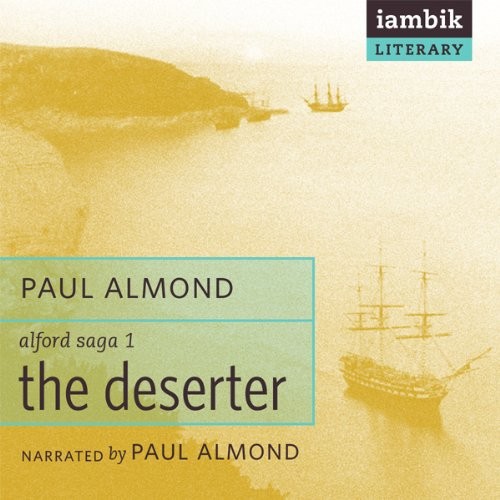 All rights reserved. The use of any part of this publication reproduced, transmitted in any form or by any means, electronic, mechanical, photocopying, recording or otherwise stored in a retrieval system, without the expressed written consent of the publisher, is an infringement of the copyright law.

The deserter : book one of the Alford saga / Paul Almond.

Design and composition by Szol Design

Scene in
Plymouth Sound in August
1815, by John James Chalon. The HMS
Bellerophon
is at the centre of the picture, surrounded by crowds of people in small boats who have come to see Napoleon.

BOOK ONE
of the
ALFORD SAGA

On his wildly swaying hammock in the Midshipman’s quarters below deck, Thomas Manning tossed and turned. He faced a huge dilemma: would he take his regular watch in the morning at eight bells? Or would he jump ship and set off for a perilous adventure in the New World?

All hands on the
Bellerophon,
a seventy-four-gun vessel in His Majesty’s Navy, were exhausted from a two-day chase of a privateer up and down Chaleur Bay. They had been given leave to go to their quarters and sleep while their man o’war waited out the spring storm in this sheltered bay. But Thomas could not stop fears crowding into his consciousness.

Just jump overboard and swim ashore — yes, but in waters so close to freezing, the human body could not last more than a few short minutes. And if he did reach the shore, a good hundred yards away, what then? Chilled senseless, would he not make the perfect prey for wild animals that abounded hereabouts? Whatever would possess him to try?

Apart from two settlements the
Bellerophon
had visited, nothing covered this coastline but trees, wild animals, and Indians. Tales of terrifying tortures by savages were traded below decks in the evenings, one more horrific than another: they’d cut a man’s entrails out and drape them round his neck as he hung in front of a fire, or eat his heart out in front of him as he died. No, put that right out of your mind, Thomas reprimanded himself. Aren’t you afraid enough?

Afraid of swimming through the spring storm that rocked and pummelled this heavy ship? Certainly. Afraid of starving to death on those snow-covered rocks? Of course. Afraid of being attacked among the barren trees by hibernating bears as starving as you are? Well, yes. And to boot, chased by the whole British Navy as a deserter? No, you must stop this, Thomas ordered, do not let yourself conjure up too much, no more thoughts of the waiting tortures. Think only of what you can achieve. Think of a farm on the cliffs, built from the very trees among which it stands. Think of a wife, broad skirt blowing in the wind, holding a child — your own son. Think of trudging behind sturdy oxen, ploughing deep red furrows in rich Gaspé soil. Think of the companionship of settlers, hear their pounding hammers erecting your barn, just as you would help with theirs. Think of the warmth on a frosty night by your very own fireplace, built from stones picked on these beaches, while your wife roasts one of the chickens you’ve raised.

But cramped in the orlop deck with its five feet of headroom, bounced in his swaying hammock with the other Midshipmen, Thomas Manning was afraid. Because he knew he was being foolish. That was the key. Foolish and inviting disaster. To take on all those bold challenges of the New World, the empty forest, the wild animals, with no experience of a pioneer life, no tools, no food, only a long-held and overpowering dream. No wonder no one else had tried to escape along this shore.

Rough as His Majesty’s Navy might be, hard though these disciplined quarters were, if you toed the line you were safe. Until you struck another battle. Yes, or until Wickett, the scourge of the vessel, got hold of you.

He saw his grim face again, black eyes smouldering under thick eyebrows, seeking out young Thomas, following, awaiting some slip-up. The Chief Petty Officer (nicknamed Wicked Wickett) was all the British Navy personified: a harsh discipli narian and a bold fighter. Unafraid to sentence a man for a lashing at the slightest infringement, he had proved himself so courageous in battle that Thomas at first had admired him. He had witnessed the man’s consummate bravery after his left fore-arm had been blown off. Tourniqueted by the surgeon, Wickett had insisted on returning to the main deck, exhorting the sailors with a rare valour, calling out encouragement in his heavy Cornish accent. Small, dark, and swarthy as befits a true Pict from the depths of Cornwall, he represented at the same time everything that Thomas hated about the rigid structures on the ship, that same rigidity he had left behind in the Old Country. Never had he fathomed, when he joined the Navy years before, that he would be placed on a ship with such a merciless disciplinarian. He had even gone so far as to find himself slitting Wickett’s throat in nightmares.

One of three who had played a practical joke on the man, Thomas would rue the day he ever joined the Navy, Wickett promised. The other two had been caught for some minor infraction, tied to the grating and lashed senseless. What Wickett threatened, he carried out. The only one left unpunished was Thomas.

But if he were to continue as a Midshipman, and if he were to evade Wickett’s threats, he would be in line for the rank of Fourth Lieutenant. With that rank he’d be safe from Wickett. So should he really give it all up? Throw it all away for the life of a deserter?

Why not? Thomas hated being forced to line up and watch some poor wretch flogged for a minor offence. British “justice” was more than he could stomach or understand. Discipline did not sit well with him, even at the Raby Castle, where his hours had been planned, jobs laid down, and all for so little reward and often few pleasures.

All this month patrolling the coast for privateers plundering merchant shipping, Thomas had waited for his chance. But a barrier of high cliffs protected the dark forbidding forests that covered the land. And there were damn few settlements along the two hundred miles of coast, certainly: one they had visited, New Carlisle, where loyal British families had fled north from the Thirteen Colonies after the Revolutionary War in 1776. But ever watchful, Wickett had made sure to cover the gun-ports with mesh, and had sent redcoated marines (the soldiers carried on every naval ship) to circle in their longboat to prevent would-be deserters escaping, even to the point of having them patrol the broad beach and muddy alleyways inland. The villagers were well aware of what would happen to anyone harbouring a deserter. So no hope there. Paspébiac, another remote settlement, was entirely French and Thomas did not speak the language; again, the marines were, as ever, watchful.

Why did the British Navy go to such lengths to stop escapees? So few men were volunteers, as Thomas well knew: most poor devils had been caught in their country villages and press-ganged into the service. Some were criminals who preferred the unknown of a shipboard life to the filthy prisons, even though every couple of weeks, the ship’s crew lost a member to accident or disease. On his one trip down from the north of England to join up in Portsmouth, Thomas had become acquainted with the perils of London life. A thief could be imprisoned for stealing food for his starving family, and sometimes, even hanged.

Vividly he recalled a lashing Wickett had arranged in the waters off Finland. A deserter had been caught in the woods after jumping ship, just as Thomas himself was foolish enough to contemplate doing now. The seaman, a country lad press-ganged in a Devon village, hated shipboard life, the food, fleas, rats, scurvy, weekly lashings, and many deaths from accident or disease. The lad had swum ashore one night, and then, without the means to survive, had finally given himself up. One thousand lashes was the punishment for deser tion, standard throughout the British Navy: a hundred on each of ten ships of the line. Brought back to the
Bellerophon
for his third dose, he was barely alive. Wickett had him strung up by the wrists, and kept sloshing icy water over him to keep him awake. Not long after they had begun with the cat o’nine tails on his back, His Merciful Lord had taken him. But they kept on lashing the body, and then passed on the lifeless meat for further floggings on other ships, to set a well-remembered example. That sight had stiffened Thomas’s resolve to leave. But not until they got to the New World.

And now, his last chance. After chasing the privateer, the
Billy Ruffian
(as the
Bellerophon
was called by the crew), would sail out of Chaleur Bay into the Gulf of Saint Lawrence, littered with icebergs, through Cabot Strait and on past Newfoundland to cross the Atlantic, where they’d rejoin the war with Napoleon. Would he survive those future naval battles? Midshipmen got wounded or killed just as the officers and crew did. He had been lucky to survive so far. And if he were to be so lucky again, would the ship return to the New World? The war between Britain and America would soon be over. No need for the British Navy to patrol the shores then.

He thought of his mother, the undercook at Raby Castle, of Goodman the butler, and the chambermaids who had tossed precious pennies into the passed hat as he left. They all expected him to do well in this New World, and would be awaiting word, due when he landed. They’d been waiting a long time. Each time the ship called in at Portsmouth, he had sent messages, divulging of course only the brighter aspect of life on board. But with no hint of the New World. In the comparative safety of the castle (always drafty but at least never dangerous), did they have any idea of the ultimate horrors of battle on board ship? Or of the almost unimaginable challenges awaiting him on this perilous coast?

Aboard his man o’war, he had fought grisly battles, faced demise and dismemberment, without a qualm. But this was different. This was the moment of a lifetime.

Such an appalling risk! But then again, why else had he joined the service? To wage war against Napoleon?

Hardly. He had joined, through the good offices of the Marquis, his mentor, precisely to find a new life abroad.

He thought of his canvas bag, filled with items he had carefully collected over the last month. Firearm, tinderbox, small axe, precious ball of marline, razor, and so on. Would it all be held up by the watertight bladder he’d made and tested one night in the icy waters? He hoped to tow it behind him when he swam for shore.

But was life here in this apparently unmanageable wilderness all he had so often imagined? The Robin’s workers he’d seen in Paspébiac, did they look any happier for their so-called freedom than the staff at Raby Castle? Well, he had found the settlers in New Carlisle prosperous, indeed flourishing. A settler’s life, that is what he wanted.

So take your chance of surviving those icy waters. Have a go at your life’s ambition, he told himself. At least you’ll die in attempting a new life. Was this not a laudable aim?

In an hour, the first light of dawn would give him the visibility to try. One tortured hour of rumination left. But then, all rumination would cease — to be replaced by either action or inaction.

In his bones, Thomas knew which it would be.