Read The Devil You Know: A Novel Online

The Devil You Know: A Novel 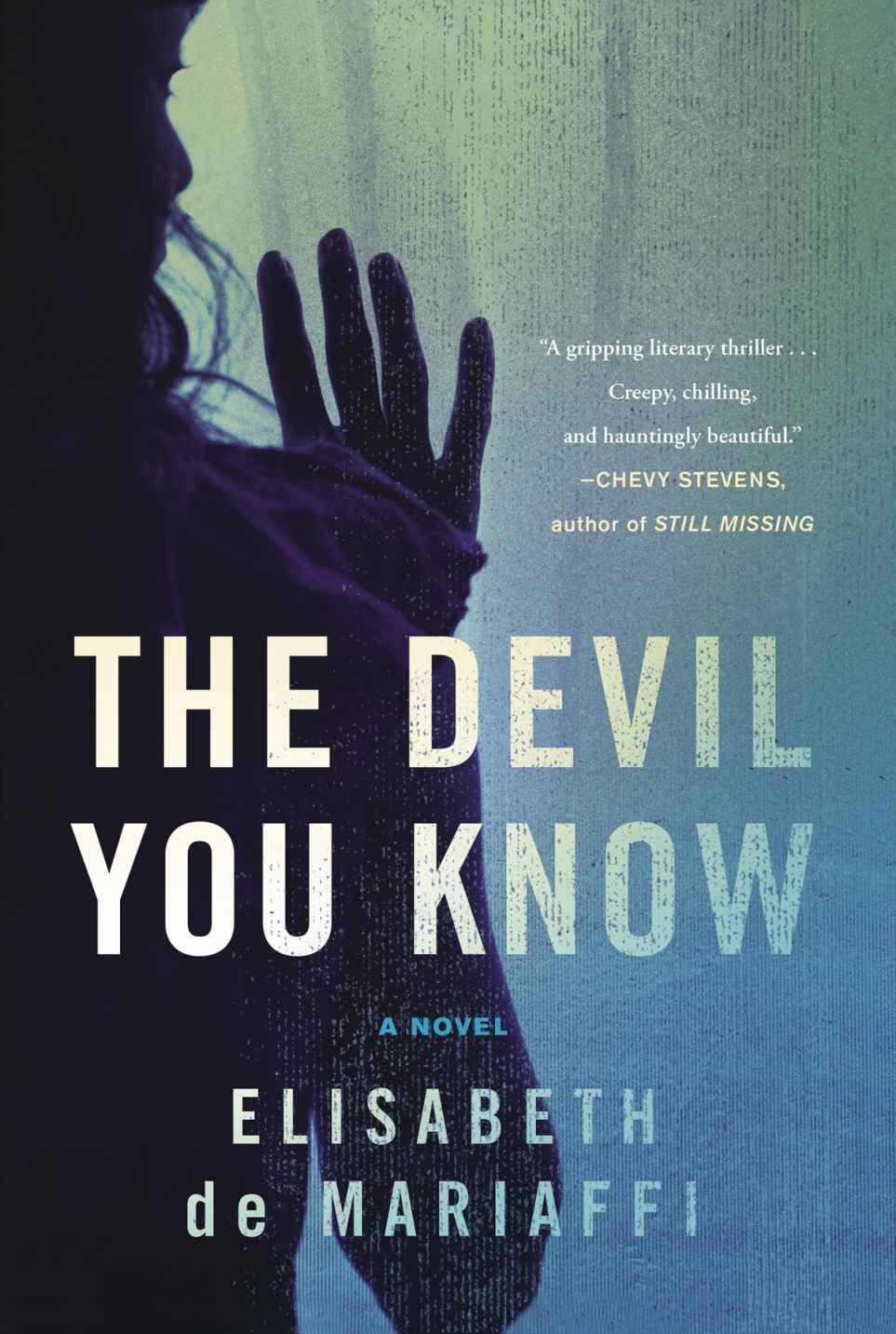 I USED TO BE PARANOID, THINKING SOMEONE

WAS AFTER ME, BUT IT WAS YOU

T
he first time I saw him it was snowing.

I was standing next to the stove, under the band of light shining down from the range hood, picking through a bag of spinach leaves and throwing the mushy ones into the sink. Outside it was white and pretty and there was just a little frost on the windows, along the edges. The kitchen faced out onto a patchwork of dark backyards sewn together with skinny, faltering fence lines. It was about nine o’clock but I hadn’t eaten dinner.

That winter I was a first-year reporter with a newsroom desk at a not-quite-national daily paper. Not even my own desk: I shared it with another new hire, a guy named Vinh Nguyen who sat out the overnights and left crumpled bags of Hickory Sticks in the pencil drawer. My mother loved and hated my job. She thought I got too close to it. Most news is bad news. Her opinion is that I lived a lot of bad news very closely as a child and enough is enough. When I was ten years old my best friend went missing and that’s what she’s talking about. You can look at this as
bad news
and it’s the understatement of your lifetime. It’s likely also the reason I started reporting the news. A balls-out way of handling trauma, wouldn’t you say?

My mother admits this is true.

I’d come on board as a summer intern with a year of j-school to
go, but the job came up and I wanted to be working. The
Free Press
prides itself on its name: free to print whatever will sell this week. Larger type than the other dailies and all-color photos. None of that makes the newsroom any less exciting, though. There’s a soap-opera-addictive quality to the quick turnover. What will happen next? Reporters watch stories approach like heavy clouds. They roll up in fits and starts. The tension break is galvanizing.

A man named Paul Bernardo had been arrested four days earlier, and I’d spent the weekend camped out in front of his house in St. Catherines, watching the forensics team walk in and out the front door dressed in their disposable space suits. My job was to take notes on anything that looked promising.

It was a famous case. Bernardo had murdered two girls inside that house, teenagers he’d held captive for days before killing them.

The last girl, Kristen French, had gone missing back in the springtime—pulled into Bernardo’s gold Nissan 240SX in broad daylight, in a church parking lot, near a busy street. These are things we are told can’t happen. The police found her shoe, lying out in the open, as if there had been a struggle.

Kristen was the third in less than a year. Five months earlier, a fourteen-year-old named Terri Anderson had disappeared, her house only three blocks from the same church parking lot. Five months before that, Leslie Mahaffy, a girl from nearby Burlington, had also gone missing, but she was found within weeks, cut in pieces and the pieces encased in cement, in a nearby lake. One of the cement blocks had been too heavy to toss and lay resting near the shore. It was Leslie’s retainer that helped them identify her body, what was left of it. She was in ninth grade.

When Kristen French disappeared, the community shut down. Girls walked home only in groups of four and five. No one went anywhere alone. St. Catherines isn’t a big place. It’s not a rough town. The house that Kristen grew up in was middle class and ordinary. They found her body later in the spring, curled and naked and left in a ditch.

News of Bernardo’s arrest knocked the entire country to the ground. Back when I was in high school, the city had been haunted by a long, unsolved series of violent rapes. The media had given this attacker a nickname and the name was something I’d grown up with: the Scarborough Rapist, never caught, was front-section news for years. Now we learned that this, too, had been Paul Bernardo. The murders were only one part of a long, slow story that had taken years to roll in. He’d raped more girls than you could easily count.

In high school, the Scarborough Rapist was a thing we talked about, myself and my friends, teenaged girls. A presence larger than a real person, an eye that saw when you were alone and unguarded. Without knowing his name or what horror was to come, Paul Bernardo was the thing we thought about when we got on and off the bus in the evenings, or on our way home from dance class, or whenever a man walked behind us too long or too close.

I’d just spent my weekend watching his house from inside the locked doors of a blue hatchback. The part of the job my mother hates, on my behalf.

I wonder sometimes how much the thinking about it helps. I came home that night and stood in my apartment making dinner and listening for odd sounds, a creak on the stairs or hallway floorboards. You’re alone on a dark street and the impulse is to keep checking: Is anyone following me? How about now? Your anxiety spikes, but then tapers off. The constant checking becomes your way of controlling the danger. If I keep looking behind me, into the dark, then there will never be anyone there. There can’t be, because that’s something that only happens in movies.

I figure it’s the one time you forget. Your mind is busy with something else and for just a moment you relax. You’re distracted by the smell of lilacs in someone’s garden or the look of the moon or some other daytime anxiety. That’s when he comes. And it’s your fault, for not playing by the rules.

There’s another way to look at this. Maybe it’s your own fear that calls him to you. You’ve imagined him so easily and so often, stalking
you in the dark or hiding in your closet or in the backseat of a car in the parking garage. It’s like you want him. This fear sounds out into the night and somewhere, evil pricks its ears.

You’re ready for him. You’ve spent a lifetime practicing.

A
t home in my kitchen, my fingers were slowly thawing out. There was a dull pain down through my teeth and I noticed how hard I was clenching my jaw, or maybe had been all day, thinking of these things, and I worked to focus on the task at hand: the spinach I was picking over, and the promise of hot food.

There were other factors about that first night I saw him, but they were things I couldn’t put a finger on. The soft details. Things the police wanted me to know that hadn’t registered. That’s what they told me later, along with everything else. What sort of footwear did he have on? Boots or shoes, high or low, black or brown? Did the jacket have buttons or a zipper? Did I say he’d had both a hood and a cap? The hood pulled up or lying flat on his shoulders? I put their report, a thin yellow carbon, into the file box next to my desk where I keep all my other receipts and notes on stories.

I was living on my own for the first time and rode my bicycle from the office to assignments. I had to borrow a blue Plymouth beater from my boss so I could drive down to St. Catherines every day, to Bernardo’s house. My boss was the news editor, Angie Cavallo. Angie stayed downtown and loaned me the car because she knew the stakeout would take a long time and would largely be boring. She’d placed her own dibs on the courtroom and the press meetings.

My apartment was part of a chopped-up house just off Gladstone, in a neighborhood that was cheap and problematic. I couldn’t see Queen Street from my front door, but I could hear the sirens at night and the addicts yelling to one another, or to themselves. I had a side entrance off the street that led up a skinny flight of stairs. Inside my own door there was a hall and three rooms: to the right, the kitchen; to the left, the room where I lived and slept. Past the
kitchen there was a bathroom with tiny black-and-white tiles all over the floor and wall, and a bathtub on legs where you could only take a shower. The tap had been co-opted, a long and slinky tube connecting it to a fixed showerhead above. Outside the kitchen a fire escape snaked up the exterior wall. Stairs from the back of the house and then a thin landing along my windows, then more steps to the third-floor apartment above. There were three guys living up there, Mexican medical students who always carried backpacks and avoided eye contact. One of them gave me a lift to the grocery store once, but he didn’t wait or come back for me and I never learned his name.

The main floor entrance was off the next street, around the corner, and it was occupied by my landlord, a mute Spaniard with three cats that were never allowed out of the house. When I first came to see the apartment he brought a notepad out of his pocket and wrote down his questions for me: Job? Parents? Money? Man?

He had a clubfoot that dragged behind him when he walked. He was dysphonic mute. That means he can make some noises, but the noises are like swallowed whines. He sounded like a barn cat that had been abandoned by its mother and learned to make sounds by imitating the lambs.

On my level, the black metal landing surrounded the back of the house. I could climb out and save myself in case of emergency. Next to the refrigerator, a door and a dead bolt led out to the escape. This was my way out. There were metal bars on the outsides of the kitchen windows, so nothing out there could get in.

I
’d had a long, cold Sunday sitting in Angie’s car down in St. Catherines. On the way home I cranked up the heat until my fingers unfroze and my grip on the steering wheel slackened. I was driving against traffic. Office people were heading home to the suburbs or all the way down to Hamilton for the night. I drove over the skyway, past the steel factory exhaust towers. A line of cars led into
the factory for the night shift, and then again at Ford in Oakville. I left the car at Angie’s place in the Annex and took the subway west and finally the Dufferin bus. There was an accident blocking the intersection at Dundas and the driver got out to buy himself a coffee while we were stopped, and I also got out and walked the last few blocks.