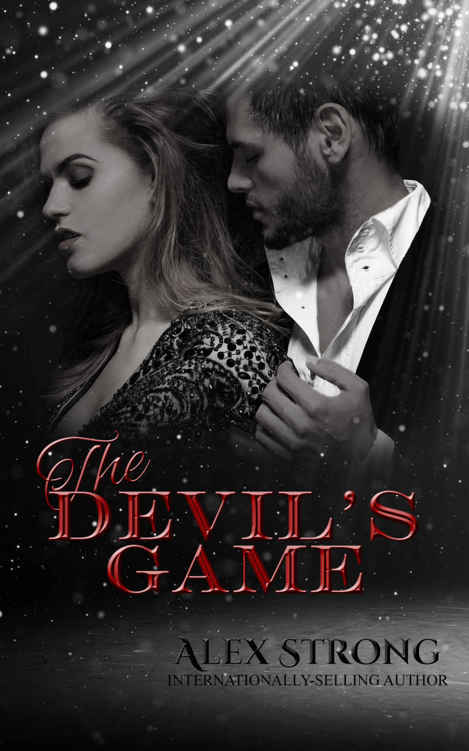 All rights reserved. Except for use in any review, no part of this publication may be reproduced, distributed, or transmitted in any form

or by any means now known or hereafter invented, or stored in a database or retrieval system, without the prior written permission of

This books is a work of fiction. Names, characters, and events are the product of the author’s imagination. Any resemblances to actual persons, living or dead, or events is coincidental.

What reviewers are saying…

“Alex Strong's writing flows so effortlessly, that it drew me in again and again….”

“I found it a delightful well written short read that once you start reading you it will keep your attention to the end. Would I recommend? Yes!”

"The author's writing is solid and robust. The plot and story line are good and different. The reader feels romance in the air."

"... the author has a knack for writing and keeping the interest of readers. The ability to control and keep the reader involved is strong."

I dedicate this book to my amazing husband. Simply because I love you.

Karina handed the cups to the barista behind her and faced the next customer. Her breath hitched slightly at the sight of him. His hazel eyes shining brightly against his caramel skin and jet-black hair were the most intense thing she’d ever seen, and though no interaction had occurred yet, she felt sure that she had done something wrong just by looking at him.

She cleared her throat. “What can I get you today, sir?”

“A grande macchiato, please,” he said in the most exquisite voice ever—a warm baritone that gently caressed her ears. The fact that it came from such a sensual mouth only made it all the more seductive.

Karina tucked a loose strand of auburn hair behind her ear and forced herself to look at the cash register and ring up his coffee.

“That will be four dollars and eighty-five cents,” she told him, reaching for a sixteen-ounce cup and writing his order on it. “And can I get your name?”

“Excuse me?” he asked, and she risked looking at him. His eyebrow was raised, and again she felt as though she had slighted him.

“I need it for the order,” she said quietly. “So it gets to the right person.”

Just then, one of the baristas called out a customer’s name.

He gave a slight nod. “Damien.”

She wrote the name as he pulled cash from his wallet, and the transaction was completed. He stepped aside to wait for his drink as another customer walked up to the register. Karina was sure she could feel his gaze burning into her, but she didn’t dare look his direction in case she was right.

Several more customers went through her line before she heard the name Damien called out, and this time, she couldn’t help glancing his way, as though even his name held a power over her. She watched him grab his drink and quickly walk to the door, where he stopped and turned, giving her a quizzical look, then walked outside to where a man was waiting for him. When he was gone from sight, Karina released a ragged breath she didn’t even realize she’d been holding.

“I’m sorry,” she said to the customer who was telling her his order. “Could you repeat that one more time for me?”

As Karina finished the rest of her shift, she wondered if she would ever see Damien again. Part of her hoped she would, but there was also a small part that feared what would happen if she did.

Karina hit submit on the web page and glanced at the time in the corner of the screen.

“Shit,” she muttered. It had taken too long to fill out that last form, and now she barely had time to make it to the coffee shop for her shift.

She logged off the library computer and grabbed the pile of papers and booklets next to it before rushing out the door. As she stepped out onto the sidewalk, Karina leafed through the pages in her arms, making sure she hadn’t left anything behind, when she slammed right into another person and dropped everything.

She bent down to pick everything up. “I’m so sorry, I wasn’t—” Karina looked up right into Damien’s golden eyes.

He looked down at her questioningly. “You’re the girl from the coffee shop.” She nodded. “Karina.” This time she frowned. “It was on your name tag,” he explained.

Karina continued to gaze up at him, unsure what to do or say. He bent down and started helping her gather up the scattered papers.

“Are you a student?” he asked, pausing to look at a printout for a graduate program.

“Trying to be,” she said, reaching for the paper. “I’m so sorry I ran into you like that. But I really need to get going or I’m going to be—”

Suddenly his hand closed around her wrist. “Have dinner with me,” he said.

Her heart raced as she looked down at the long, tapered fingers touching her skin and was surprised she didn’t feel the need to pull away.

“Are you seeing someone?”

“Do you know who I am?” he asked, looking slightly puzzled.

Karina studied him in his Burberry coat over the tailored suit, a fancy watch on the wrist of the hand still gripping her. He was obviously well off, but there was nothing familiar about him.

“No,” she said with a sidelong glance. “Should I?”

“I suppose not,” he said, releasing her, and she slid the flyer from his fingers.

She stood, and he stood with her.

“Again, I’m sorry,” she said and stepped around him, rushing off. She glanced over her shoulder to see him watching her, and she turned back around, walking even faster as her heart pounded in her chest.

Karina was in the back cleaning up when the front door chimed and she sighed. Michael had said they could leave a little early if no one else came in by the time she finished, but now he was going to insist they stay the last half hour.

She started to hang the broom back up but froze as soon as she heard the customer’s voice.

Karina waited as Michael made the drink and then held her breath, listening for the chime signaling that Damien had left. He didn’t need to know she was still there. But the sound never came. Instead, Michael walked into the back carrying one of the cash drawers.

“Do you mind watching the front while I count this till?”

Karina nodded and stepped hesitantly out into the seating area, where Damien was sitting at a table in the corner, not the least bit surprised to see her.

She should ignore him—start wiping the counters or something. But as he held her in his gaze, she let curiosity get the best of her and walked up to his table.

“Did you decide you needed one last coffee before heading home?” she asked, gripping the back of the empty chair across from him.

“Actually, I came to see if you would reconsider my invitation to dinner. But I couldn’t very well just sit here waiting for you. Hence the coffee,” he said, lifting his cup. She looked at the fingers wrapped around the cup and involuntarily grabbed her own wrist, remembering his touch.

“I’m afraid you’ve wasted your five dollars then,” she said, putting her hand back on the chair. “Because the answer is still no.”

Damien tilted his head. “Do you mind if I ask why?”

Who the hell
was
this guy? Had no one ever told him no before? Karina decided the truth might be her best defense. She turned to make sure Michael was still in the back before sitting in the empty seat.

“I can only think of two reasons you want me to go out with you,” she told him. “You’re looking for a one night stand, or you are seriously interested in dating me. Either way, I have too much on my plate for any distractions. In another life, I might have considered either offer,” she said with a twinge of disappointment. “But unfortunately, your timing is off, so the answer’s still no.”

She watched and waited while he took a drink from his coffee.

“In that case,” he continued, standing. “I should let you go for the night. I appreciate your being direct with me.” And he left without saying anything else.

Karina sighed as she watched him walk away. Maybe someday, when things weren’t such a mess, she could say yes for once.

There was a knock at Karina’s bedroom door just before nine the next morning.

“What is it?” she asked, rolling over.

Her roommate Ginny popped her head in. “There’s someone at the door for you. Were you expecting anyone?”

Ginny shook her head. “He looks important though. And drop-dead gorgeous.”

Damien was the first person to come to Karina’s mind. But why would he be at her door? And how would he even know where she lives?

“Tell whoever it is I’ll be right out,” Karina said, grabbing the sweatshirt at the end of the bed to put over her tank top and throwing back the covers. The thin leggings did little to stop the chill as she climbed out of the warm bed. She walked into the living room to find Damien standing by the door, looking completely out of place in the tiny apartment.

“Good morning,” he said, his eyes brightening at the sight of her.

“Morning,” she replied with a frown. This was getting creepy.

“I’ll just grab my coffee and then go get ready for work,” said Ginny. She gave Karina a look as she walked back to her bedroom, and Karina knew she wanted details later.

“How did you find me?” Karina demanded as soon as Ginny’s door clicked shut.

“It was easy enough,” he said, not really answering her question.

“Do you mind if we sit?” he asked. “I have a proposition I would like to make.”

Karina knew that she should send this man away. Call the cops if he refused to leave. But her curiosity about him got the best of her yet again, and she moved to the middle of the couch while he took a seat in the chair angled toward her. Damien didn’t look uncomfortable in it, but the whole space felt too small for him, too dull. Or maybe that was just her.

“So what’s your proposition?” she asked, crossing her arms.

“I’ve looked into your situation—”

“Who the hell do you think you are?”

“—and I want to offer my help,” he finished.

“And what exactly is it that you think you know about my situation?”