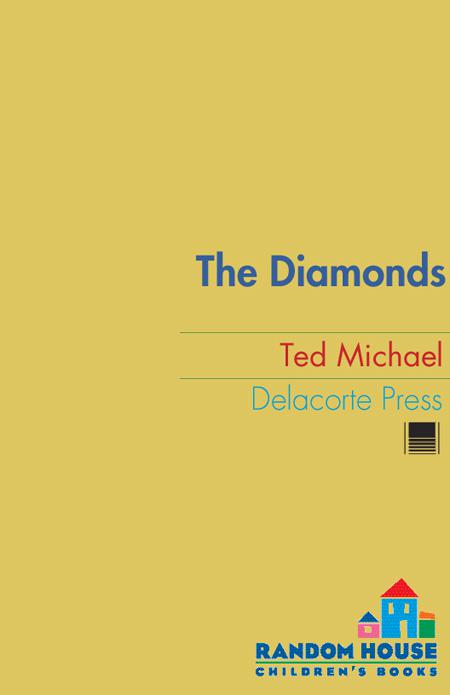 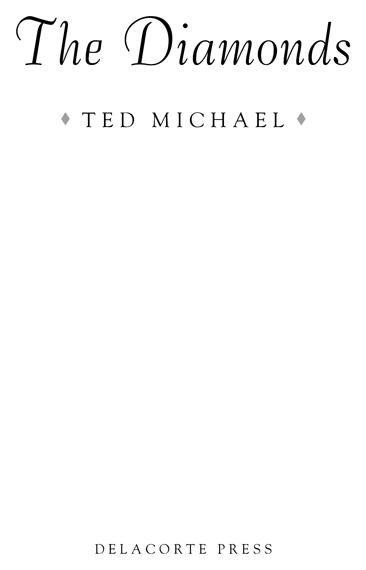 For my sister, Abby,
who sparkles more than any Diamond I know

Let us not be too particular; it is better to
have secondhand diamonds than none at all.

Congress shall make no law respecting an establishment of religion, or prohibiting the free exercise thereof; or abridging the freedom of speech, or of the press; or the right of the people peaceably to assemble, and to petition the Government for a redress of grievances.

—The First Amendment
to the United States Constitution

I was in English when it happened.

AP Literature, to be specific. Next to me were Eric Rogerman, who listened to his iPod during class and was prematurely balding, and Mary Aberfeld, who smelled alternately like cheese and pickles and was prematurely balding, too. Behind me sat Dara and Dana Hoebermann, identical twins with lazy eyes and a penchant for gossip. The rest of the class, more or less, was filled with people I didn't particularly care about—not in a rude way, don't get me wrong, but in the sense that my life with or without them would be exactly the same.

It was the third day of school. So far, we'd read
scenes from
Romeo and Juliet
(Shakespeare, 1597) out loud while Mrs. Bloom spoke the stage directions with an affected British accent.

Fact: Bloom is a complete nutjob.

It wouldn't surprise me to learn she was from another planet entirely, one where it was acceptable to leave your house in the morning with curlers nestled in your hair, wearing a necklace of baby spoons and forks strung on mint-flavored dental floss. (I won't even try to explain that one.)

Still, there's nothing better than performing Shakespeare—even if it's not onstage. I'd been stuck with the role of the Nurse; at first, this offended me beyond belief. The Nurse was old and probably fat. Definitely fugly. One of the title roles was being played by Marisa T. Karava, the only person I knew who wrote her middle initial on papers and who, if asked her name, would reply, “Marisa T. Karava.” (I could therefore only assume that the “T” stood for “Tool.”)

Marisa read Juliet's lines with about as much enthusiasm as I had for going to the dentist. I'd almost suggested to Mrs. Bloom that she'd made a terrible casting mistake, but then I realized I sort of
liked
reading the Nurse. To spice things up in class, I spoke every other word with a cockney accent. It threw people off, which was a good thing. Jed thought I was predictable, and I despised that label. I wanted to be spontaneous. Fun. Carefree.

Here's the scoop on Jed, my boyfriend: two years before, as a sophomore, he'd become the first
underclassman in Bennington's history to be elected student body president. He'd held on to the title ever since. Jed excelled at the game of (high school) politics—patting the right backs, shaking the right hands, kissing the right asses.

I was the girl he could be himself around, loosen his tie around (literally; Jed wore a tie to school every day), even complain around. I'm not sure if it was
love
, but our relationship was definitely more than your typical high school fling. Jed understood me, which was what I liked most about him. Not that his father was nouveau riche or that Jed was a Dartmouth legacy or that his wardrobe consisted almost entirely of buttery pastels or even that he ran the morning announcements, which were pretty much his own television show that aired for ten minutes during homeroom.

Fact: At the Bennington School, a disgustingly posh preparatory on the outskirts of Manhattan (and by that I mean Long Island), the morning announcements are presented on televisions throughout the school—one per classroom—in this ridiculous sort of variety show that Jed hosts. One of the privileges of being student body president.

Typically, student groups wrote up their own messages and Jed performed them like monologues while the show filmed live in the video production room behind the auditorium. At Bennington, the morning announcements were a Pretty Big Deal, and Jed Brantley was a Pretty Big Deal for delivering them.

But he was an Even Bigger Deal for dating me.

Marisa had just butchered the balcony scene
(Romeo
. Pause.
Oh Rom-e-o. Wherefore
cough
art thou
yawn
Rom-e-o?)
when Mrs. Bloom glanced at the clock and flipped on the TV screen above the blackboard.

“Do you like being the center of attention? Are you blind?” Jed asked. He was wearing a ribbed sweater, hair swooped over his right eye in a way that made me want to brush it back. “Auditions for
The Miracle Worker
are this week and the Drama Club wants
you
to be there on Friday!”

I really shouldn't let him write his own jokes.

“Now, there's something important I have to say,” he said.

“Most of you know my girlfriend, Marni.” A few kids turned around to stare at me. “Short blond hair, sort of pretty, nice gams.”

Sort of
pretty?
Gams?
I attempted to hide my eyes behind my fingers.

“I just want to say how much I've enjoyed dating you this past year,” Jed continued. “You've been a great girlfriend.”

A few girls “awwed,” even though his little speech was definitely not aww-worthy. Some of the guys on the opposite side of the room rolled their eyes and I silently applauded them. I had no idea what Jed was doing.

“That being said, it's time to let you know that we're through. I've met someone else who's really great
and, uh, doesn't like her friends more than me. Sorry. I'm sure you understand.” Jed straightened a few papers on his desk and then said, “Hey, Darcy!” before the announcements were over and the screen turned blue.

No one looked at me, and no one made any noise. At all. The room was so silent I could hear myself breathe. I could hear the soft hum of Eric's iPod and the sound Mrs. Bloom's shoes made against the floor. My arms began to tingle and my stomach swirled like water in a toilet bowl.

“Can you believe that?” I heard Dara Hoebermann say.

“That effing
sucked,”
Dana replied. “Even more than the time I ate a Popsicle for breakfast and my tongue was stained orange.”

“That was
this morning
,” said Dara.

I attempted to smile. Maybe I could play this off like it was all a big joke, like I'd known that Jed was going to do this. But I hadn't known. As the whispers started filling up the classroom, I could hear my own voice echoing,
Stupid, stupid, stupid
, in my head. And I tried hard—the hardest I'd ever tried—not to break down and cry.

After a few minutes, or what felt like minutes and were probably only seconds, the heads started to turn. I dug into my purse for my cell phone and quickly texted
911!
to Clarissa, Priya, and Lili. Supposedly, if
we ever received a text like that during school, we would all leave class and meet up in the faculty bathroom—which no one ever used—by the student parking lot. I say “supposedly” because it had never happened before. An emergency, I mean. And this was
definitely
an emergency.

I clicked Send and raised my hand. “Can I use the bathroom?” I asked, trying to sound as desperate as possible, which wasn't very difficult. “It's important.”

“He's a pig,” Priya said, wiping her eyes with a Kleenex. “He
disgusts
me. If I wasn't on a diet that forbids eating bacon, I would totally fry him up and put him on a BLT. Like
that.”

By the time I arrived at the bathroom, Priya, Lili, and Clarissa were waiting for me with open arms. That's what friends are for, I guess. Being there to pick you up when you're down.
Way
down.

“Thanks, Priya,” I said, trying to avoid acknowledging that Jed had made a mockery of me in front of the entire student body
and
that Priya was on a diet, which meant I would have to start one in a few days. (You can't let one of your best friends diet alone. It's inhuman.)

And the whole broken heart thing, too.

I felt completely out of control. Tears poured down my cheeks; my nose was raw and leaky; my throat burned and my chest throbbed with pain. Every muscle in my body was sore and weak and numb. I barely had the strength to hold a tissue.

Priya gave me a smile, or at least what I
thought
was a smile. Her eyes were hidden by a ginormous pair of black sunglasses that matched her hair, which was piled on top of her head like a plate of spaghetti.

“He doesn't deserve you,” said Lili, rubbing small circles on my back. “You're much better off without him.”

Lili was nothing at all like Priya, who was loud—life of the party—and the tiniest bit, well, dumb. Not that everyone has to be smart or anything, but while Priya had been blessed with the ability to fill out a halter top, Lili had been blessed with brains. Her mother had been born in Korea and her dad was Mexican, leaving her petite and slightly olive; there was a natural glow about her, and the result was stunning. Lili didn't seem to notice how pretty she was, though, which made her the easiest of all my friends to get along with.

“I guess,” I said between sobs. Had Jed really dumped me like that in front of the entire school? Had our relationship meant so little to him? “It sure doesn't feel that way.”

I blew my nose and averted my eyes from the mirror. I had never looked worse in my entire life. I felt like a wet, unwanted blimp. I glanced over at Clarissa, who had perched herself on the sink, the toes of her turquoise pumps dangling in midair. Once a week, Clarissa wore an outfit that was various shades of a specific color. That day she had followed in Picasso's
footsteps and declared her “blue” day, choosing a navy blouse with eyelet lace and a sleek pair of low-rise jeans; a thick iridescent ribbon framed her forehead.

Bullet Proof: A MacKenzie Family Novella (The MacKenzie Family) by Avery Flynn
Death and the Penguin by Kurkov, Andrey
More by Lily Harlem
Waiting for Rain by Susan Mac Nicol
A deeper sleep by Dana Stabenow
Branded by Jenika Snow
Lambs to the Slaughter by Sally Spencer
Xeelee: Endurance by Stephen Baxter
Swap Meet by Lolita Lopez
Lovers by Christmas: by Angelita Gill