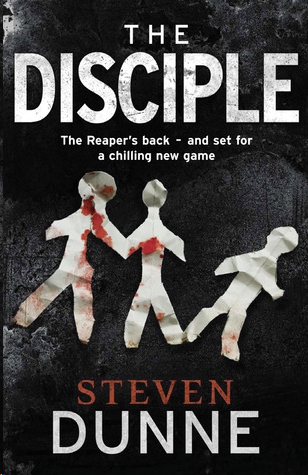 In Conversation with Steven Dunne

The man eased the door closed, guiding it gently onto the latch. When he heard the lock click he sucked in a lungful of the sharp salty air to clear his head. He could hear the occasional gull in the distance but it was a lonely note, the early birds not yet on the wing, the light insufficient to make out the pickings left by the receding tide.

He looked at the sky, dark and damp, no hint yet of the grey dawn peeping over the horizon, then hitched his jogging bottoms higher and retied the strings. He smiled as he rearranged his genitalia, feeling the tacky moisture of recent sex along his groin – even at the age of forty-three, the thrill of illicit conquest still bestowed a childish buzz – then stepped onto the wet road and crossed to the far pavement.

He turned to see the girl in the first-floor bay of the guesthouse, barely covered by a worn curtain that had doubtless shrouded hundreds of copulating lovers from the eyes of the world. He grinned but motioned her away from the window in mock censure. She, in response, let the curtain slip to show him a breast, then let the curtain fall completely and stood before him naked.

The man put his hands on his hips in feigned disgust, then looked around and pointed down the road, as though someone else would be walking around at this ungodly hour.

The girl shrugged her shoulders and laughed. She turned her back, bent over and pressed her buttocks against the window.

The man shook his head and turned to jog away, realising that his departure was the only way to end the cabaret. Kids today!

As he turned onto King’s Road, jogging gently towards the burnt-out skeleton of the West Pier, Tony Harvey-Ellis glanced at the grey-black ocean, wondering whether to risk a dip after his run. The water would still be mild even in late autumn.

He pulled in a huge breath and looked around in vain for another soul. He loved this time of day when he could have Brighton to himself. The early hours were the best time to venture out onto the streets. The throngs of tourists had eased after the hot months but Brighton still drew frenzied hordes of hens and stags all year round, carousing long into the night – enough to deter most residents at the weekends.

This was
his
time, time to think; increasingly his only time since his life had become so complicated. With all the new accounts needing his attention and the constant juggling of the demands of his wife and stepdaughter, he had become unused to solitude. At least Terri’s age was one less problem to concern him – she was legal now. Her real father would find it difficult to pin anything on him after so long … assuming he still cared.

Harvey-Ellis paused briefly, stretching his upper torso and flexing his knees. The sweat was beginning to dot his forehead and his knees felt ready for some real work. He checked his watch – it was five o’clock – and prepared to set the stopwatch on his chunky Tag Heuer.

A noise that was neither the sea nor a car made him turn. A figure, indistinct in a tracksuit and baseball cap, was jogging along the promenade a couple of hundred metres behind him, feet slapping at the ground, breath steaming in the sharp air.

Annoyed at having his solitude contaminated, Harvey-Ellis consoled himself with the thought that at least he’d have a spectator to impress. He started his stopwatch then struck away powerfully from the jogger.

As he ran, Harvey-Ellis practised shifting an imaginary ball to
his left and then right. He felt good as he bounced lightly across the tarmac. Maybe this would be his last season. He loved his rugby, loved the physicality of it, the sense of brotherhood, the union of wildly differing human physiques melded into one team, one purpose. But he didn’t love it enough to move from his position on the wing to a berth with the forwards, as his pace dwindled. He’d seen enough human battering rams with beetroot noses and cauliflower ears to want to risk his good looks.

He slowed and half-turned to see the other runner almost upon him. A natural competitor, Harvey-Ellis lifted his pace again. For a few seconds, he listened for the receding sound of the other runner’s footfall, but instead it seemed to be drawing nearer.

Okay, thought Harvey-Ellis, time to put on the burners, show you a sight all too familiar to the fullbacks of the Southern and District League. He picked up his pace to a sprint, lifting his knees, pumping his arms straight and blowing his cheeks rhythmically to take the necessary shallow breaths.

For nearly a minute, he maintained this pace and tried to block out all movement in his peripheral vision. But his ears could not block the sound of the second runner closing in and his eyes could now see the shadow thrown over his own by the jaundiced glow of streetlights. His lungs could take it no more. He threw up his head and slowed through the gears to a stop. He put his hands on his knees and sucked air urgently into his lungs, turning to grin at his pursuer. He didn’t see the clenched fist, or the small needle protruding from it.

Jason Donovan Wallis was alone except for Bianca, his tiny sister snoring gently in her room. His aunt was on nights again and the bitch had left him in charge. Dread. Not that he wanted to go out in this weather but her draughty old house in Borrowash, a few miles to the east of Derby, chilled him to the bone. No heating,
no light. Storm damage, they’d said on the radio; the whole area was under blackout. Despite this, the heavy curtains were drawn across the windows, blocking out any hint of the faint moonlight, and Jason was not in the least tempted to change that.

He’d had a text from Banger chatting that the rest of the crew were ‘Gonna make the most of it, smoke some peng, do some cars, whatever.’ Did Jason want to ‘stop being a gay and come and hang. LOL.’

Yeah, right. Walk around in the dark like a skank – with that killer still out there. No way. He weren’t going nowhere on his own. That copper Brook had warned him about The Reaper after his mum, dad and sister were cut up. ‘The Reaper’s out there waiting, watching,’ he goes, ‘waiting to finish the job.’ Jason was well gone at the time. Booze, drugs maybe, he couldn’t remember. Brook had threatened him, tried to make him cough to that old biddy’s murder. ‘You’re next, Jason – you’re next.’

Jason eased into a secret smile. The Reaper had forgotten him. Jason was a survivor. And he’d sorted Brook out – no messing. Trashed his place and mashed his cat’s brains in.
Feds who fuck with me get fucked up double.

He pulled the blanket tighter around his shoulders, squinting at the single flickering candle he’d managed to root out from under the stairs. He listened to the wind howling and stared out of habit at the inert TV screen.

The noise of the front gate creaking on its rusty hinges made his head turn. Jason waited, not moving, aware of the rising tide of fear washing through him. But no one knocked at the door. No one banged on the window. Only the sound of the gate assaulted his ears, pounding against the wall under the weight of the wind.

‘Bollocks!’ he spat. Now he’d have to go out and refasten it or it would be hammering all night. Trust his aunt to be on nights, leaving him on his own to babysit. He listened for the sound of the gate, dreading its explosion, beckoning him off the couch, out of the sanctuary of the house.

But it didn’t come. Outside the wind raged still, whipping sodden leaves and soupy litter into a drunken dance, but the gate refused to complain under the assault. Gradually Jason’s annoyance turned to puzzlement … then dread began to seep into him. Now he longed to hear the crash of the gate, telling him it was only the weather out there messing with his head.

He tiptoed to the window to look out through a crack in the curtain into the wildness. A dark figure stood by the gate, perfectly still, perfectly calm against nature. Though Jason could see only blackness where the face should have been, he sensed that whoever was standing there was staring straight back at him.

He hurtled out of the living room. With the door opened, the draught sucked the life from the small candle but Jason didn’t return to relight it. Instead, sprinting up the stairs three at a time, he bundled into his bedroom to look out of the window at the garden below. He could make out nothing, until a flash of lightning illuminated the scene. The figure had gone.

Jason’s heartbeat was beginning to slow when a single bang on the door quickened it once more. He could feel panic rising within him like bile and was unable to keep his limbs still. Frantic, he looked round for his mobile, his only umbilical cord to the rest of humanity, then realised, a wave of nausea crashing over him, that he’d left it downstairs.

Another bang on the door, but it wasn’t a friendly sound – rather a booming rhythmic knell.

After the third knock, silence returned. Even the wind whistling up from the Trent seemed to take a time out.

Jason held his breath. Eventually he plucked up the courage to tiptoe back down the stairs. He pulled open the tatty curtain that served to block the draught from the front door and peered through the condensation on the mottled glass. No one there. He heaved a sigh of relief and then fumbled in his pocket for his lighter so he could relight the candle. When he looked up
once more, it was to see a figure filling the doorway. He leapt backwards in shock, pulling the curtain back across the door.

Jason shrank back to the foot of the stairs, cowering on the bottom step.

‘I’m sorry about the old woman,’ he said, almost to himself. Then he spoke more loudly, directing his words towards the door. ‘We didn’t mean to kill her. I told Brook. He knows. Didn’t he tell you? Is it the cat? That was Banger’s idea. I didn’t want none of it. It weren’t me …’

Jason began to whimper quietly but stopped at the sound of tinny music leaking out of the front room. He leapt to pick up his mobile and looked at the display. He had a text from an unknown number. Jason pressed a key and read the text.

Jason let his hand fall and began to sob again. Then he lifted his phone once more and dialled the source of the text. It was picked up on the first ring. No one spoke.

‘I said I’m sorry. Okay? I’m sorry. What do you want from me?’ No answer. Then the noise of breaking glass in stereo. In his right ear on the phone. In his left ear from the kitchen at the back of the house. Jason lowered the phone and turned towards the gloom of the hallway. He bolted to the stairs and sprinted back up them, not daring to glance towards the dark kitchen.

At the top of the stairs, he turned and ran towards his bedroom again. It flashed through his mind that perhaps he should grab little Bianca to keep her safe, but he decided he didn’t have time. She’d have to take her chances.