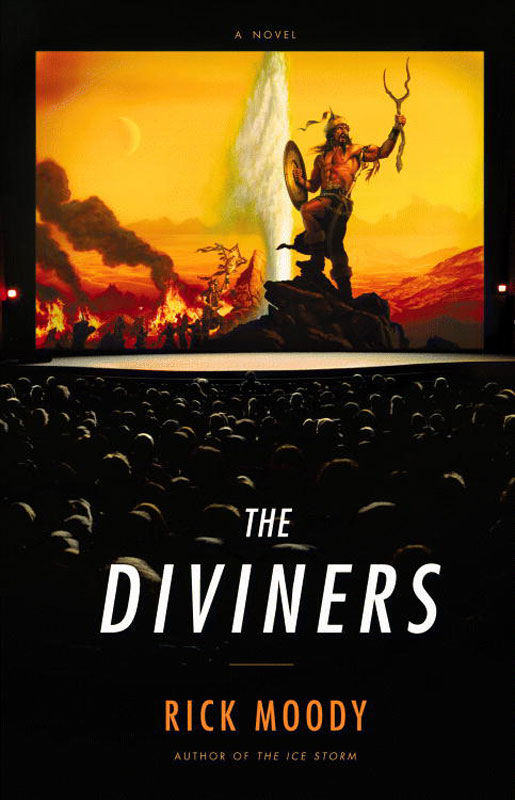 Visit our Web site at
www.hachettebookgroupusa.com

Epilogue and Scenes from Upcoming Episodes31

The Ring of Brightest Angels Around Heaven

The light that illuminates the world begins in Los Angeles. Begins in darkness, begins in the mountains, begins in empty landscapes, in doubt and remorse. San Antonio Peak throws shadows upon a city of shadows. There are hints of human insignificance; there are nightmares. But just at the moment of intolerability there’s an eruption of spectra. It’s morning! Morning is hopeful, uncomplicated, and it scales mountaintops, as it scales all things. The light comes from nowhere fathomable, from an apparently eternal reservoir of emanations, radioactivities. Light edging over the mountaintop and across the lakes of the highlands, light across the Angeles National Forest, light rushing across skeins of smog in the California skies. Light on Redlands, light on the planned communities, light on the guy tossing the morning newspaper from a Toyota with a hundred and ninety-three thousand miles on it. Light on the Santa Ana River, on a drunk sleeping tenderly beside its dregs, light on the Santa Ana Mountains, the San Bernardino Mountains, light on the Prado Basin, where a stabbing victim welters in her wounds. Light on East Los Angeles, on gangsters who haven’t slept yet. Light upon the unvisited downtown expanses of Los Angeles. An empty city bus idles at a red light. Light on the La Brea Tar Pits, on the Pleistocene and Holocene residents of the city, light on the system of viaducts coming down from the mountains, from the trickle of the Colorado River, light on the faint traces of the San Andreas fault, light on the cracked and empty sidewalks, light moving faster now, or apparently faster, the Magic Hour of dawn on the tanning-salon faces coming out of endless parties from the night before. Light upon the freeways, light upon tinted windows, light upon limousines. Even the back lots are perfect with it. Cinematographers everywhere are awakened, as if light calls upon them to arise. Light upon the stray dogs and jackrabbits and condors and Mediterranean fruit flies, nestling in the valleys. Light surging toward the beaches now, toward the great and somnolent ocean, light upon lovers, light upon Manhattan Beach, light upon Hermosa Beach, light upon a pair of punk rock kids in leather pants smoking weed beneath the pier at Redondo Beach, light upon sleeping lovers on a beach, light upon all Los Angeles, and then the light
beyond
Los Angeles, until the city is a memory receding in the progress of morning, just a layer of auburn air and music pulsing from a dream, light upon the waves, faster now, or so it seems, light over surfers, bobbing on the waves, light over the channel islands, and then light in the immensity of the sea, giving up the comfort of the coast.

Light upon the great Pacific, upon the North Central Gyre, circulating clockwise through this immensity, illuminating the strata of the deep from the Aleutian Islands to the West Wind Drift. What was oppressively dark now has a greenish cast with hints of blues and grays: indigo, slate, milori, zinc, Sevres. Light upon the seawater, therefore, and its potassium, manganese, calcium, and chloride, the particulate of eroded rock. Light upon the invisible phytoplankton and all organic material. Light upon sea vegetable, light upon coral reefs, light upon the Pacific gray whale, wending its way south to warmer climes, and light upon other cetaceans, light upon the continental shelf, all the way down to the continental shelf, light upon the Pacific anomaly known as La Niña, for it is the new year of La Niña, with her particular weather madness. Light upon schools of Pacific marine life, light upon sharks, light upon tuna and other harvestibles. Fish are surging toward the surface of the Pacific with the enthusiasm that they have for feeding when it is light. What a beachhead the light makes here across the northwestern edge of the Hawaiian Islands, Kauai, Nihau, then up toward the atoll of Midway, known for its naval battle. Light upon guano deposits and seabirds perched about the buildings housing the permanent naval staff of Midway, a staff numbered year-round at twenty-three. Light is no respecter of the international date line, though any complete account of the instant of morning must include it, light hastening over the international date line. Were an ensign from Midway to travel out a few nautical miles, he would expunge an entire day, he would have one day less in his tour in the Pacific. Somewhere in the helter-skelter of this morning is tomorrow.

Light upon the western Pacific, where the trenches are, where the fish themselves are the light source. Eyes attached to long stalks that glow with some interior phosphorus or radium. Drifting, miles down, in a blissful state, free of man, in the heterogeneity of marine creation. Light upon all these trenches and all these scars and striations of the ocean floor marking the subduction of tectonic plates, where the molten earth bubbles up and makes its presence known in the indigo surface of the ocean. In the trenches, light is hope or fantasy. Light as possibility and as revelation.

Light upon the Volcano Islands of Japan, western Pacific. No more than five miles long, the archipelago, but large enough to entertain the most brutal of battles in the last global war. Twenty-six thousand lost, in aggregate. Light upon the Japanese soldiers still in the caves there, whispering their sutras, drinking condensation from the cave walls, awaiting word from the emperor, unaware of Japanese deflation and the three recessions in the past ten years. Light upon Mount Suribachi and the tattered American flag that once flew there before Iwo Jima was returned to the prefectural government of Tokyo; light upon the dark history and the porous volcanic rock of Iwo Jima, on its sulfur mining and its sugar refineries. There is also the briefest commencement of dawn on the Bonin Islands, another group of volcanic extrusions near the Tropic of Cancer, where, on this day, rosewood is to be harvested, with its streaky purple timber, for fine cabinets. Light upon the monsters of this island retreat, Godzilla, Baragon, et al., whose creation is owing to the nuclear history of the region, light upon the bright flash of the nuclear explosion, for now the rising sun of morning, streaming in the east, is upon the island of Kyushu, southerly in the Japanese archipelago, light upon the great expanses of green of Kyushu, and now dawn upon Nagasaki, where the second of the explosions was detonated, light of dawn reflective of that other light. Light on the island of Kyushu as source for the growth there of tobacco crops and tea leaves, light upon the tip of South Korea, light upon the Yellow Sea, light beginning to make itself felt up and down the peninsula of Korea, upon Inchon and Nampo, the comparatively shallow Yellow Sea, illuminated in viridians, light at the speed of light on an axis of rotation, toward the Chinese coast, toward Shanghai, where there was the tail end of a typhoon just last week.

Light upon the Madrassas, in Peshawar, the Madrassas as numberless as the petals on the lotus blossoms of the world. The Madrassas have taken in all the boys, light upon their affection for the game known as football, light upon the game they play this morning in a dirt lot near the Khyber Pass. Light upon the sheer cliff walls of the Khyber Pass, light upon the troops belonging to a military dictator bent upon keeping as many Afghan refugees on the other side of the pass as is possible, light upon fleeing Afghan refugees, light upon men whose beards are of insufficient length. Light upon fugitive barbers. Light upon the Silk Road, where Nestorianism took refuge when driven out of Constantinople. Light upon the afflicted rapists of Afghanistan who are busy, allegedly, defiling the boys of Dehi-i-Haji and Juwain. There are men who follow every wayward devil. Light upon men fleeing into the hills, light upon Tajiks and Uzbeks, and Kurds, and Arabs, light illuminating the plateau of Iran, over the mountains and into the Dasht-e-Lut, where the hills heave up abruptly, sheer, blue, gray. Not a soul to be seen, except these horses and their riders, fleeing. Though the smokestacks of a natural-gas facility are apparent upon the horizon as the light breaks over the desert, even here the conflagration in the east is hallucinatory. There is the sound of Kurdish epic poetry on the breeze; there are imaginary pistachio trees, with their delights. Up ahead on the rocks, an oasis, at least until the advent of further light, when all the riches of Persia appear instead to be part of memory. The sleepers in the desert are weary but cannot wake, and the dawn sweeps westerly over them, further into Mohammed’s country. As far as the eye can see, the prophet and his vision, the dawn is his metaphor. He seeks refuge in the Lord of the rising day. The Lord has no qualities and there are no words with which to name his qualities. Dawn is for all the peoples of Mohammed’s country: Persians, Kurds, Arabs, Palestinians; dawn is for Baghdad, dawn is for Mecca or Medina, or it is for Damascus or for Jerusalem. Here is the dawn, see the sky bespangled with the signs of the zodiac. Here’s the muezzin. Light upon the first cup of tea, light upon the faithful inclining toward prayer, light upon refugees in camps getting up to pray, how long until their knees give out from it, light upon believers, light upon the settlers of the West Bank, light upon them and their weapons and their certainty, light upon all the armed forces who refuse to serve, light upon Jerusalem and Beirut and Cairo, light upon the authors of Torah, light upon Talmudic scholars, all weepers at the Wailing Wall, light upon the remains of the temple at Jerusalem, light upon the Egyptian ruins, light upon the remnants of Mesopotamia, light upon the thousand and one nights, story without end. Dawn is more reliable than conceptions of dawn, so all of this splendor diffuses into the fog at the very shore of the Mediterranean. Weary is the morning, having come so far, weary of toil. Morning is eager to bathe in the sea. All the bathers on the scorched sands see it now, dawn, coming over the buildings, its fingertips brushing across the promontory at Jaffa; four thousand years this promontory of bathers, a million and a half dawns witnessed here, every dawn with a naked body to enumerate its colors.