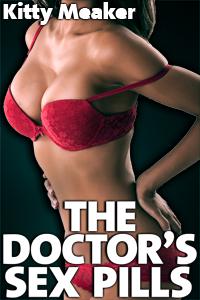 She was about to give up on the search when she saw a curious line – “Medical Testing. All Applicants Accepted.”

She clicked on the link and read further.

“
Dr. Sarno's Medical Research Clinic is looking for qualified applicants to participate in trials of a libido enhancing drug. Applicants must be over the age of 18 and should NOT be sexually active with a partner.”

“
Applicants must be willing to submit daily journals and use a patented medical device to measure the effect of the medicine. Applicants will be required to abstain from sexual relations while participating in the study, and will be disqualified for doing so. You will receive a cash payment immediately after your approval, and all qualified applicants will receive a cash payment after each weekly appointment.”

The ad went on to detail when and where they'd be accepting applicants.

“
Only tomorrow, and only for an hour,” Lindsay murmured. “Wonder if it's worth trying.”

She went to the fridge for a beer. She sighed, realizing she was out of beer. “Well, I guess that decides it, then.” She saved the address in her phone and set her alarm for the next morning.

She showed up to the clinic and was surprised to find that there wasn't a line outside. She stepped in and saw that there were only a few people waiting. She went up to the front desk. “Where are all the people?” she asked.

The lady handed her a clipboard. “Fill this out and bring it back to me. We've only had a few responses to the ad, so you shouldn't have to wait long.”

Lindsay sat down and looked briefly around the waiting room. Nobody in there was as pretty as she was.
If they're here for the same reason I am, it's easy to guess why they're not having sex,
she thought, then admonished herself.
I shouldn't judge. I'm just as broke and lonely as they are.

She filled out the form quickly. It mostly asked the same questions that had been mentioned in the ad – was she sexually active? Will she commit to filling out a daily journal? She checked yes to everything and turned the form over, surprised to find that there was nothing on the back. She brought the clipboard back up to the desk and handed it over.

“
Thank you,” the lady said. “The doctor will be with you shortly.”

Lindsay sat and waited while three other women were called in to see Dr. Sarno. Having nothing better to do, she timed them – each woman was in and out in less than ten minutes. She watched them leave, but none of them seemed to be upset about being rejected from the program.
Is he really approving them that quickly?

Shortly after the third woman left, the nurse called her name. She stood up and followed her back into an exam room.

To her surprise, the doctor showed up immediately. “Good morning, Lindsay,” he said. “I'm Dr. Sarno.”

She reached out and shook his hand, surprised to see how young he was. He sat down across from her and the nurse walked out, shutting the door behind her.

For a moment, Lindsay was taken aback by the question. She'd almost forgotten why she was here. But she managed to compose herself and answered, “At least three or four times a week, doctor.”

Lindsay blushed. “I usually only have one. When I'm having sex, I sometimes have more. But I haven't had sex in a few months.”

The doctor handed her a folder and a small bottle of pills. “Be sure to read the information here. The patch is inside the folder. You'll want to place it on your inner thigh as soon as you get home. It's very durable. You don't have to worry about covering it in the shower. You'll take two pills tonight for a starter dose, and you'll take the rest of the pills once every morning.” The doctor stood. “Alright? Great. I'll see you in a week, Lindsay.”

Lindsay stared after the doctor. It had all gone by so quickly, she hardly had time to process what he was saying. The nurse came in and escorted her back to the front. Lindsay got out her wallet automatically, completely forgetting that she was the one being paid for this visit. When the nurse handed her three hundred dollars, she couldn't hide her shock.

The nurse smiled. “Just be sure to wear the patch and take your pills,” she said. “If we can't get accurate results, we can't keep paying you.”

Lindsay smiled back. “Don't worry. I'll be sure to do everything right.”

She biked back home in a hurry, eager to get home and start the treatment. The money had motivated her, and she wanted to be sure to give the doctor the results he wanted.
At least I can afford to put gas in the car now,
she thought. Her legs, already sore, would be grateful for that.

Despite her sore legs, Lindsay practically ran up to her apartment. She opened the folder and pulled out the silvery packet containing the patch. She pulled her jeans off and opened it up, placing it carefully on her inner thigh. She then began to read the documentation the doctor had given her.

There was a lot of stuff about how people suffered from low libido and how this medication could help them, and she skipped past that. Eventually she got to the directions for taking the pills. “Take two pills right before you go to bed,” it read.

Lindsay looked at the clock. It was only two in the afternoon. She shrugged and opened up the bottle. Couldn't hurt to take the first dose now.

She swallowed the pills and laid down on the couch. She closed her eyes and relaxed. After a while, she stirred. She was getting hot. She pulled off her shirt and jeans. She glanced at the clock, surprised to see that an hour had already passed. She laid back down and closed her eyes again.

Lindsay woke up and her body was hotter than before.

“
Shit, what's wrong with me?” she muttered. She pulled off her bra and panties. She looked at the clock. Another hour had passed. Lindsay closed her eyes, trying to get back to sleep. But her body was so damn hot!

She reached up to scratch an itch on her chest. She accidentally brushed her hand against a nipple and gasped. The brief touched had stiffened her nipple and sent an electric shock through her body. She touched her nipple again, cautiously.

“
Ohhh!” she cried, feeling the same tingle go through her body. Her other nipple stiffened in response, and Lindsay could feel the tingle traveling all the way down to her pussy. She moved a hand down there, wondering if the sensation would be as intense.

“
Oh fuck!” she cried, her body spasming hard at just the briefest touch on her clit. She was panting now, in a high state of arousal. She realized it must have been the medication making her so sensitive to touch. She touched her cunt again and had to bite back a scream. She could feel her wetness growing just from the brief touching, and knew she couldn't hold back.

Lindsay was fast approaching an orgasm. She turned her face to the couch cushions, trying to muffle the loud groans that were coming out of her mouth. Her hand fucked her cunt faster and faster, her other hand toying with a nipple that felt as hard as a diamond. The heat was building and building inside her, and she knew she was about to let it all out.

“
Ohhhh fuuuck!” she screamed into the couch cushion. Her thighs clenched together hard, trapping her hand on her cunt. She groped and squeezed her breast, desperately chasing the sensation. The wave crashed into her and she gasped, couldn't breathe for a long moment. Finally, she caught her breath. Panting, she continued to rub herself, soaking her hand in her juices. She'd never been so wet before, never been so out of control.

The pills,
she thought.
They did this to me – no, did it
for
me!

Lindsay's orgasm slowly began to fade, but she wanted more. She pulled at her nipple, but there was no longer the electric feeling that she'd experienced before. She gave a cry of dismay before realizing what she needed – more pills!

She jumped up from the couch and ran into the kitchen. With shaky hands, she opened the bottle of pills. She only hesitated a second before pouring them into her hand and swallowing them one by one.

Lindsay pulled on a pair of shorts and a t-shirt, moaning as the fabric slid over her taut nipples. She ran out of the apartment as fast as she could. She had to get back to the doctor's office!

Lindsay rode her bike down the streets like a madwoman. She could feel the seam in her shorts rubbing against her clit, and each jolt of the bike gave her another spasm of pleasure. She hunkered low on the bike, trying desperately not to crash. Finally she made it to the doctor's office. She raced up the stairs, not bothering to wait for the elevator.

When she finally crashed into the waiting room, she was the only one there. She approached the front desk, trying to control herself.

“
I'm sorry, but we're not taking any new appointments this late in the day-” the woman behind the counter began.

The woman's eyes went wide. She looked over Lindsay's body, could see her taut nipples and her shaking hands. “Just a second! I'll go get the nurse,”

Lindsay stood there for a long moment, trying not to touch herself. Then a door opened and the same nurse from earlier in the day beckoned her over. They walked back to the exam room, Lindsay shaking and gasping the whole way. They passed the doctor on the way in.