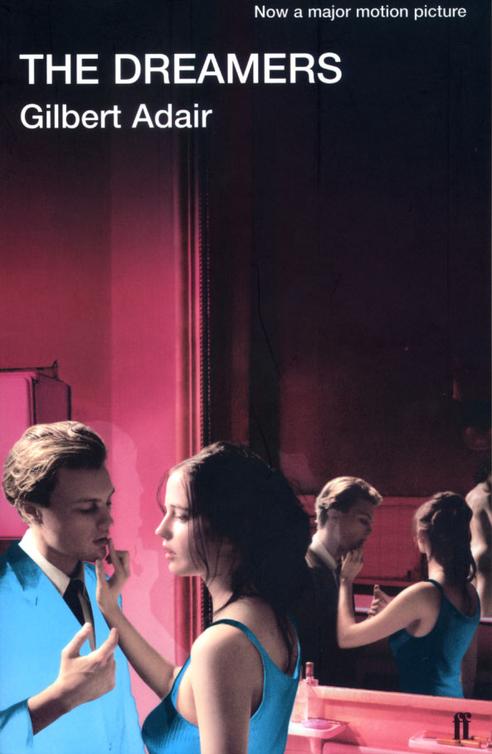 for Michael, Eva and Louis –
any other actors would have been impostors

The CinÃ©mathÃ¨que FranÃ§aise is located in the sixteenth arrondissement of Paris between the TrocadÃ©ro esplanade and the avenue Albert-de-Mun. The
Mussolinian
monumentality of the Palais de Chaillot in which it's housed so impresses the cinephile visiting it for the first time that he rejoices in living in a country ready to accord such prestige to what tends elsewhere to be the least respected of the arts. Hence his disappointment when he discovers, on closer inspection, that the CinÃ©mathÃ¨que itself occupies no more than one small wing of the whole edifice, arrived at, almost furtively, by a basement entrance tucked away out of sight.

This entrance can be approached either from the esplanade, an enchanted plateau of lovers, guitarists, roller skaters, black souvenir vendors and tartan-frocked little girls chaperoned by their English or Portuguese nannies; or else along a curving garden path which,
running
parallel to the avenue Albert-de-Mun, affords one a glimpse, through illuminated shrubs, of the
wrought-iron
Mount Fuji of the Eiffel Tower. Whatever the approach, one ends by descending a flight of steps to the CinÃ©mathÃ¨que's foyer, whose intimidating austerity is relieved by a permanent display of kinetoscopes,
praxinoscopes
, shadowboxes, magic lanterns and other naÃ¯ve and charming relics of the cinema's prehistory.

It used to happen that the garden would be invaded by cinephiles three times an evening, at six-thirty, eight-thirty and ten-thirty.

The true fanatics, however, the so-called
rats de
CinÃ©mathÃ¨que
, who would arrive for the six-thirty
performance
and seldom leave before midnight, preferred not to fraternise with those less obsessive visitors to whom Chaillot meant no more than an inexpensive night out. For cinephilia, as it was practised here, in the very front row of the stalls, was a secret society, a cabal, a
freemasonry
. That front row remained the exclusive province of the
rats
, whose names ought to have been inscribed on their seats just as the names of Hollywood directors used to be stencilled on the backs of their collapsible canvas chairs, the
Mr Ford
or
Mr Capra
slightly obscured by the designee's shoulder and upper arm as he turned his smiling, suntanned gaze towards the photographer.

What else were these
rats
, these fanatics, these denizens of the night, but vampire bats wrapping
themselves
in the cloak of their own shadows?

If they chose to sit so close to the screen, it was because they couldn't tolerate not receiving a film's images
first
, before they had had to clear the hurdles of each succeeding row, before they had been relayed back from row to row, from spectator to spectator, from eye to eye, until, defiled, second-hand, reduced to the
dimensions
of a postage-stamp and ignored by the
double-backed
love-makers in the last row of all, they returned with relief to their source, the projectionist's cabin.

Besides which, the screen really was a screen. It screened them from the world.

âHave you seen the King?'

âHave you seen the King?'

Spring, with its tufts of crocuses and violets bursting forth from nowhere like a conjuror's bouquet of
tissuepaper
flowers, had come that evening to the gardens of the CinÃ©mathÃ¨que.

It was twenty past six. Three adolescents emerged from the metro exit on to the place du TrocadÃ©ro and turned towards the path which ran parallel to the avenue Albert-de-Mun. The question had been posed by
the tallest of the three. He was muscular and lean but held himself with a lopsided stoop that seemed
inconsistent
with his physique. Under his jumble-sale clothes one imagined delicately chiselled anklebones and
subtle
, shark's-fin shoulder-blades. And these clothes of his â the patched corduroy jacket, the jeans whose creases tapered off into baggy nothingness below the knees, the leather sandals â he wore with the genius that Stendhal somewhere attributes to a lady alighting from her
carriage
. His name was ThÃ©o. He was seventeen.

His sister Isabelle was an hour and a half his junior. She wore a cloche hat and a soft white fox boa which, every five minutes or so, she would sling over her shoulder as negligently as a prizefighter's towel.

But she was as far from the sort of mutton-headed misses for whom such accessories represented a fashion statement as would be two athletes running side by side, shoulder to shoulder, one of whom has lapped the other. Not since her childhood had she worn anything new. More precisely, she had never grown out of a
childish
infatuation with dolling herself up in her
grandmother
's gowns. She had grown into these gowns and made them her own.

The mutton-headed misses stared at her, wondering
how she did it. The secret was:
she didn't do it with
mirrors
. Isabelle would say haughtily, âIt's vulgar to look at yourself in a mirror. A mirror is for looking at others in.'

It wasn't to his sister but to the young man walking beside her that ThÃ©o's question had been addressed. Though at eighteen Matthew was the oldest of the three in age, he was the youngest in appearance. He was of a featherweight frailness of build and had never shaved in his life. In his crisp blue jeans, tight âskinny' pullover and white sneakers, he appeared to walk on the tips of his toes without actually tiptoeing. His fingernails were bitten to the quick and he had a compulsive habit of flicking the end of his nose with his squat index finger.

There was once a faun that came to a mountain pool but was incapable of drinking any water because it would turn aside, again and again, to reassure itself that no hostile presence lurked nearby. It finally died of thirst. Matthew might have been that faun. Even in repose, his eyes would glance sideways, warily.

Matthew was an American, of Italian immigrant
origin
, from San Diego. He had never left home before. In Paris, where he was studying French, he felt as gauche as an alien from another planet. His friendship with ThÃ©o and Isabelle, a friendship which had matured in
the white shadow of the CinÃ©mathÃ¨que screen, he judged as a privilege of which he was undeserving and he lived in fear that his friends would eventually arrive at the same conclusion.

He was also terrified that he hadn't properly read the small print of their relationship. He forgot that true friendship is a contract in which there can be no small print.

A lonely man thinks of nothing but friendship, just as a repressed man thinks of nothing but flesh. If Matthew had been granted a wish by a guardian angel, he would have requested a machine, one yet to be invented,
permitting
its owner to ascertain where each of his friends was at any given moment, what he was doing and with whom. He belonged to the race which loiters underneath a loved one's window late at night and endeavours to decipher shadows flitting across the Venetian blind.

Back in San Diego, before he arrived in Paris, his best friend had been a football player, a good-looking youth whose symmetrical features were marred by a broken nose. This best friend invited him to spend the night at his parents' home. His room was in a state of undress. The bed was littered with dirty teeshirts and
underpants
. A Bob Dylan poster and a college pennant were
pinned to the walls. A stack of board games was piled up in a corner. From the bottom drawer of a chest-
of-drawers
he took out a large buff envelope whose
contents
he spread over the carpet â creamy-textured photographs clipped from fashion and sports
magazines
and depicting young men, most of them in profile, all of them in various stages of
dÃ©shabillÃ©
. Matthew,
confused
, believed that his friend was making a confession and that the same confession was now expected of him. So he admitted what he had not realised about himself until that very instant: that he too was aroused by male beauty, by naked boys with nipples like stars.

The best friend was revolted by this unsolicited
disclosure
. His parents had offered him a plastic surgery operation as an eighteenth-birthday present. What Matthew had taken for erotica was an anthology of sample noses. His heart beating madly, he sneaked back to his own home in the middle of the night.

He determined never again to be caught in such a trap. Fortunately, the door of the closet out of which he had momentarily stepped proved to be a revolving one. Loath to reveal his own secret, the friend didn't breathe a word of the indiscretion.

To revive his desire, he constructed a system out of the very gaffe that had caused his heart to beat. Like a good little Catholic, he would confess every week in the English church on the avenue Hoche.

Confession was his vice. It inflamed him more to plead guilty to his petty squalours than it ever did to practise them. The dankness of the confessional nearly always gave him an erection. As for the necessary
friction
, it would be generated by the delicious
discomfiture
he felt at having to catalogue the number of times he had âtouched himself'.

The Butcher's Granddaughter by Michael Lion
Taking Control Of The Stud Across The Hall by Tory Mynx
Bunch of Amateurs by Jack Hitt
Bin Laden's Woman by Gustavo Homsi
Beijing Bastard by Val Wang
Windfallen by Jojo Moyes
Feather Castles by Patricia Veryan
2008 - The Consequences of Love. by Sulaiman Addonia, Prefers to remain anonymous
Born on a Tuesday by Elnathan John
Tempted by Marion, Elise