Read The Duke's Undoing (Three Rogues and Their Ladies) Online

The Duke's Undoing (Three Rogues and Their Ladies) 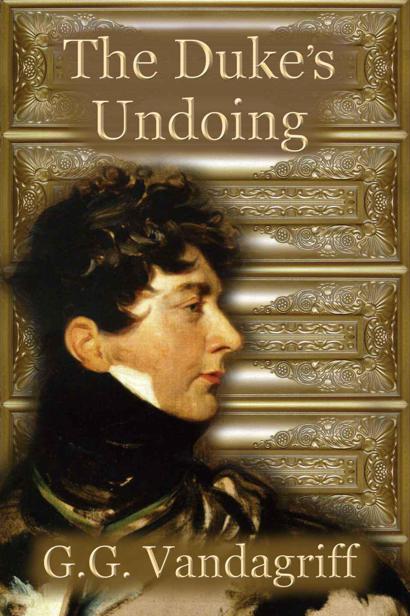 If You Liked This Book

Because thou hast the power and own’st the grace

To look through and behind this mask of me

(Against which years have beat thus blenchingly

With their rains), and behold my soul’s true face,

The dim and weary witness of life’s race,—

Because thou hast the faith and love to see,

Through that same soul’s distracting lethargy,

The patient angel waiting for a place

In the new Heavens,—because nor sin nor woe,

Nor God’s infliction, nor death’s neighborhood,

Nor all which others viewing, turn to go,

Nor all which others viewing, turn to go,

Nor all which makes me tired of all, self-viewed,—

Nothing repels thee, . . . Dearest, teach me so

To pour out gratitude, as thou dost, good!

Sonnets from the Portuguese

Miss Elise Edwards—A young woman with far too many fiancés

Lady Clarice Manton—Elise’s aunt with whom she lives

IN WHICH WE MEET THE DUKE OF RUISDELL, REPUTED ROGUE

Peter Northcott, the Duke of Ruisdell, exited White’s elegant subscription room, preparing to leave the only place that seemed familiar these days—the succoring gentleman’s club with its lovely Georgian proportions, click of billiard balls, and timeless fragrance of coffee, brandy, and cigars. In the vestibule, he assumed his many-caped greatcoat in order to leave for a boxing match at Gentleman Jackson’s saloon. Though it was June, it had recently rained, and the duke, just returned from the warmer climate of the Peninsula, found it chilly.

His well-fed friend George Baxter, Marquis of Somerset, called to him from just beyond the bow window where the infamous betting book stood on its hallowed stand.

“Ruisdell! Come! I’ve the very thing to cure your
ennui
,” Somerset coaxed him in robust tones. “Your favorite sport.”

The duke took the nearly complete sentences as a mark of concern on the part of his friend. “I’ve no knack for any sport until this leg of mine heals,” he replied. The place where the musket ball had lodged in his shin bone was paining him, but he reminded himself that he was lucky he still had his leg, even though he was reduced, at the age of five and thirty, to be seen with a mahogany walking stick that was more than just a gentlemanly prop. “Do you know, Somerset, I’m actually afraid to look in the mirror most mornings, for fear my brownish mane will show threads of gray. I’m sure I will soon have permanent creases on my face and look like a gypsy.” Though not a vain man, he had no wish to appear old before his time. Limping slightly, he moved back inside the club to converse with his friend.

Somerset beamed at him, his shiny round face looking more mischievous than ever. “Oh, put a stopper in it! Woman I’m thinking of will make you forget your wound. Can still use that silver tongue of yours. Napoleon didn’t take that away. Invalidism masks your nature, man! Object of sympathy.”

“The devil with you. D’you think I want sympathy from a woman?” Seeing George’s crestfallen look, he continued, “Add that to the fact that I would be surprised beyond belief if there is a woman between the ages of sixteen and five and forty who doesn’t already know my true nature.” He gave his friend a deceptively sweet smile, while pulling on his gloves. “Plus, I have just been through Marianne’s histrionics
ad nauseum
. Believe it or not, I have no taste for women at present. But I
will
place a wager on the outcome of the match tonight.” His capes finally arranged to his satisfaction, he strode to the betting book, and taking the quill from George, wrote in his all but illegible hand, “Tatterson in the fifth round.”

“Are you mad?” asked George.

“No, just unusually prescient,” Ruisdell said. “Care to come with me? I’ll lay you any odds you like.”

His friend’s eyes showed their mischievous twinkle. “Ten to one?”

The duke nodded and wrote the odds in the betting book followed by his flowing signature, “Ruisdell.” The act lifted his spirits. He considered Ruisdell Palace in Derbyshire the finest estate in the Kingdom and carried its name with honor. Unfortunately, his widowed aunt, who heartily disapproved of him, lived there. Taking over the duchess’s suite upon the death of Peter’s parents, she had stated her intention not to move out until her nephew brought home a bride. Formidable woman, his aunt.

“My hunting box in Leicestershire.”

“Lost my taste for it. But in any case you needn’t worry. I’ll win. What’s your stake?”

Ruisdell smiled his first smile. “When I win, we’ll come back here, have some supper, and I shall proceed to get foxed. They’ve a decent brandy in the cellar. Bought at auction this morning. Smuggled, undoubtedly.”

Arm in arm with his friend, he left for Gentleman Jackson’s, maneuvering his cane in such a manner that he looked a dandy rather than a cripple.

Hours later, Ruisdell and his friend arrived back at White’s, the duke ten thousand guineas richer but melancholy as ever. He called for the newly purchased brandy, all the time realizing in the depths of his soul that it wasn’t going to make him feel better. If anything, it would make him feel worse. Strong drink had come to have a lowering effect on his spirits of late. Had it not been for poor George, who had just lost a packet to him, he would have sought a comparatively early bed at Shearings, his London house.

“See here, Ruisdell. Filly I was telling you about. Just the woman for you! An innocent. Dashed beauty. Unusual. Eyes like midnight in summer. Black with a hint of blue, y’know? Bit of a slant.”

“Almost sly,” Somerset continued. “Black hair. Coal black. Natural curls. Hard to tame. But she has no problem with her gray mare. Sweetest seat I’ve seen. Rides in Hyde Park most mornings. Ties that hair back with a ribbon.” George stopped for a moment and gave a sigh of frustration. “Love to see that hair spilling across her white shoulders.” Another long sentence. It affected the duke more than he could say, but not in the way Somerset intended. It merely made him pity the man.

“I suppose you’re looking to me to give you a firsthand account?” The duke was weary. Weary to the bone. He had no desire to see naked shoulders with hair of any color spilling over them. Marianne had worn him out with her ruses, her traps, and her hysteria. Just now, the spoiled beauty was trying jealousy. He had picked up the information at the saloon. She had just engaged herself to some ancient French
duc
who had fled to England with his millions during the Reign of Terror. Ruisdell imagined their
affaire d’coeur
had begun while he himself was still on the Peninsula, to be broken off suddenly at his unexpected return. Otherwise, her ability to become engaged between noon today and dinner tonight would have been a feat beyond even Marianne’s magical charms.

The marquis seemed to divine something of his sour mood. “So, old fellow, want to talk about to-do with Marianne, or just leave be?”

“Not much to tell. Same old story. I’m not the marrying type. Told her from the beginning. But they never listen. Women always think they can change you. Why is that?” With the example of his own mother constantly before him, he was determined never to come under a woman’s thumb. Never.

“Can’t lump in a stunner like Lady Marianne with rest of world. Probably always gets what she wants. Daughter of a duke and all that. An Incomparable. Prettiest filly in London.” George paused to light a cigar and then swirled the brandy in his glass. “Beauty I was telling you about. Bit of mystery. Age two and twenty, good dowry. But must be averse to matrimony. Queer as Dick’s hatband.”

“Somerset, cease your vulgar cant. Why do you suppose it’s queer?” Ruisdell only asked because he knew the marquis was bound to tell him and had been bent upon this course of action since they’d met this evening by the betting book.