Read The Edge of Normal Online

The Edge of Normal 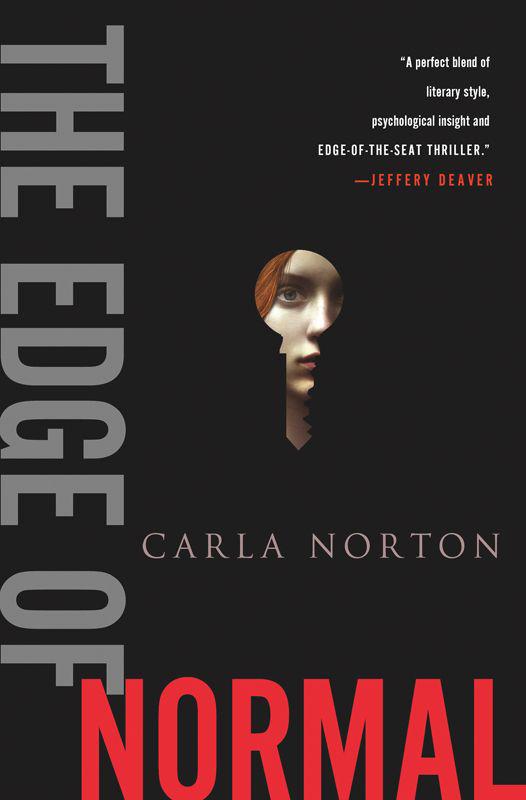 This book is dedicated to Colleen Stan and to survivors everywhere.

Your courage is an inspiration.

Her name had been out of the headlines so long that he was sure no one was searching for her when he fit the key into the lock for the last time. The door swung wide on its hinges, but he felt no need to secure it behind him. The steps groaned beneath his weight as he descended into the basement and ordered her to stand and face the wall.

First came the blindfold. Next, the handcuffs. He wrenched her hands behind her, tightening the cuffs until she flinched.

Then he bent close, inhaling her scent, lingering over her neck, admiring the pattern of scars that laced her skin. With a thumb, he slowly traced the crenulated edge of the newest one, still bright pink, which ran from her left shoulder blade, down and across her spine, to a sweet spot just above the waistband of her pink-and-black pajama bottoms.

“Turn around and open your mouth,” he said, and when she did, he put a tablet on her tongue and told her to swallow. He’d calculated a dose that would make her sleepy enough for the trip, but not so drugged that he couldn’t rouse her for what he’d planned for later.

Encircling her neck in a loose headlock, he licked his lips and whispered, “Now, my little cricket, we’re going on an adventure. Don’t dare even chirp.”

Her old sneakers were much too small and he hadn’t thought to buy shoes, so she went barefoot as he steered her up the stairs.

He paused at the door and snapped off the only burning light before moving through the kitchen toward the back, where he had everything ready. He peeked through the blinds. The neighborhood was quiet. The trees that shaded his backyard were in full leaf, obscuring the view of any neighbors. Better yet, it was raining.

He slipped a hooded poncho over her head, opened the door, and shoved her out ahead of him. The pair moved across the porch and down the back steps. The grass soaked his shoes as he walked her small frame along the path and through the back gate into the alley.

It was well past midnight and he had planned out every detail, but this was the risky part. A streetlight glared across one unavoidable stretch. In just three paces, they were back in the protective shadows, and in three more they were at the car.

The silver Mercury Grand Marquis was parked at an angle, with the trunk unlatched. He opened it, lifted her in his arms, and quickly placed her inside, muttering, “Lie down and be still.”

He had lined the trunk with an old quilt earlier that night. This was mainly to dampen any sound, but it also gave her a cushion to lie on, and he planned to remind her of this act of kindness if she complained later.

Once she was locked in the trunk, he slipped into the driver’s seat and settled behind the wheel, sitting in the darkness, scanning windows and watching for movement.

A cat skittered across the alley and disappeared into the brush. A breeze stirred the leaves overhead and fat raindrops spattered his windshield. Nothing else.

He waited another moment, stroking his thick, unkempt beard, then turned the key in the ignition and eased the car down the alley, where he clicked on his headlights and turned left. There was no traffic, but the rain was coming down harder now, and he scrupulously watched his speed, braking gently at two red lights before turning onto the road that wound through the arboretum. His tires made wet hissing sounds as he made the turns.

Daryl Wayne Flint smiled, glad for the added concealment of the rain, feeling certain that he’d managed it all perfectly.

The whole process of packing up and moving had been a headache, but everything was finally set. He would soon have her secured in his new house, a roomy place set far back from the road. Private and rural, with a big basement that made it all worth the risk. Its floor was flat and even, so that he could wheel his equipment around with no trouble. Its ceiling was high, and the overhead beams would be perfect for securing hooks.

But as shrewd as he was, Daryl Wayne Flint hadn’t fully considered that even on a wet Wednesday night, Seattle’s bars might be busy well past midnight. Or that some stubborn patrons could linger until bartenders had to shoo them out. Or that a few customers would stagger out too drunk to drive. Or that one particular driver would fail to turn on his headlights and come barreling down the steepest part of 23
rd
Avenue just as a silver Mercury turned into his path.

Flint barely glimpsed the coming collision and never saw the explosion of breaking glass glittering in the rain as the two cars smashed and spun.

Tuesdays are always a test, and getting to his office is the hard part, but twenty-two-year-old Reeve LeClaire has never told her psychiatrist about her route. It begins with a short walk to the Ferry Building, where she routinely orders a hot chocolate and carries it outside, sipping its sweetness while watching the ferries emerge from the fog. The boats come from Vallejo and Larkspur and Sausalito, trailing white foam and flocks of gulls before stopping to off-load a morning rush of commuters.

When the sun breaks through the fog, Reeve turns her face to it, shuts her eyes, and savors the red heat on her eyelids.

No one notices her in the flow of the crowd, and she feels almost smug about her anonymity. She’s hardly recognizable as the schoolgirl pictured in the “Missing” posters, or the pasty waif heralded in the tabloids. Though still on the small side, she has grown an inch and gained sixteen pounds. Her teeth are fixed. She is clean and smooth and has plucked her eyebrows to precise arcs.

Her hair has grown back so nicely that it’s almost a source of pride. She often changes its color to black or blond or, today, maroon. She wears it neatly cut, feathered, and always long enough to cover the scars that remain visible on the back of her neck.

When the clock tower begins its 9:00
A.M.
chime, Reeve shoulders her bag. By the time its elaborate music is finished and it’s pealing seven … eight … nine, she is out of the Ferry Building and crossing onto Market Street. The street vendors and musicians are too busy to bother her. But the farther she makes herself walk down this street, the more cautious she must become.

She sets her jaw. Here comes the wooly-faced man with the tarp-covered cart. He’s always here, hustling the corner by the bank, but she forces herself to look straight ahead as she hurries down the sidewalk, skin prickling.

Next comes the BART station, with its gauntlet of grubby people. She veers around them and comes face-to-face with the tall man in the smeared raincoat. She holds her breath and charges onward as he barks, “God bless you!” at her back.

She squares her shoulders. She’s doing fine. Two more blocks and then she’s nearly there. She feels the air on her face. Her legs are strong and she walks with purpose.

As she passes the sidewalk café, a handsome young waiter catches her eye and smiles, but she looks away. Why would she trust guys who pretend she’s pretty? She knows very well that she is not, with her crooked nose and pointy chin.

She looks down at the sidewalk and follows the feet walking in front of her, then glances up and sees the safety of the Hobart Building, where the guard makes every visitor sign in. She waits at the crosswalk, balanced on the balls of her feet, watching traffic, scanning the last dangerous stretch. The light changes and she hurries across the intersection. The moment she reaches the other side, the filthy man in the wheelchair rolls into view.

Reeve stops, feeling her chest knot. She considers crossing back to the other side of the street and approaching the building from the far corner, by the flower stand. But the man is looking the other way. If he just keeps rolling forward, Reeve can slip past behind him, unseen.

She calculates, takes a breath, and hurries toward the building’s entrance. She is twenty feet away … ten … five … when the man in the rolling chair works his wheels and pivots. His eyes blaze. His whiskers jut out like wire.

Reeve jumps back, swallows, and charges past him into the building, where she stops in the cool lobby to catch her breath. Next, she confronts the elevator. It’s so old and small that it feels cramped with just three people. She knows she could do it; she has done so in the past. But not today. She opts for the stairs.

The waiting area of Dr. Ezra Lerner’s office is always scented with citrus, and she is relieved to arrive early so she can enjoy the fragrance and cool down after climbing nine flights. She nods at the receptionist, a pleasant woman with a Cupid’s-bow mouth, and slides into her favorite chair.

The walls are pale jade, and a white orchid blooms from a cobalt-colored pot on the coffee table. She picks up the latest copy of
The New Yorker
and flips through, looking at photos and reading cartoons. Sometimes she gets all of them, but today they seem obscure. She studies them for meaning and chides herself for not following the news.

Patient privacy is strict office etiquette, another reason Reeve feels safe here. The receptionist never calls out her name, even if no one else is in the waiting room. Only her family, a few people in law enforcement, and Dr. Lerner know that Regina Victoria LeClaire, the girl who was kidnapped at age twelve and held captive for nearly four years, has legally changed her name.

Alien Storm by A. G. Taylor
Love Delivered by Love Belvin
Council of Evil by Andy Briggs
Pages of the Past (Bellingwood Book 9) by Muir, Diane Greenwood
The Prince of Bagram Prison by Alex Carr
Chronicle in Stone by Ismail Kadare
Beta’s Challenge by Mildred Trent and Sandra Mitchell
An Unstill Life by Kate Larkindale
Code Name: Luminous by Natasza Waters
The Minstrel's Melody by Eleanora E. Tate