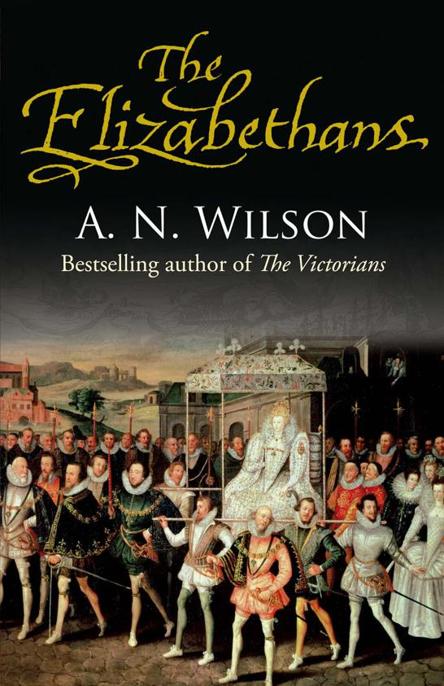 Also by A. N. Wilson

Part One: The Early Reign

7 A Library at Mortlake

15 A Frog He Would A-wooing Go

Part Four: The Close of the Reign

28
Essex and the End

29
Hamlet
: One Through Two

With all the panoramic sweep of his bestselling study The Victorians, A. N. Wilson relates the exhilarating story of the Elizabethan Age. It was a time of exceptional creativity, wealth creation and political expansion.

It was also a period of English history more remarkable than any other for the technicolour personalities of its leading participants.

Apart from the complex character of the Virgin Queen herself, we follow the story of Francis Drake and political intriguers like William Cecil and Francis Walsingham, so important to a monarch who often made a key strategy out of her indecisiveness. Favourites like Leicester and Essex skated very close to the edge as far as Elizabeth’s affections were concerned, and Essex made a big mistake when he led a rebellion against the crown.

There was a Renaissance during this period in the world of words, which included the all-round hero and literary genius, Sir Philip Sidney, playwright-spy Christopher Marlowe and that ‘myriad-minded man’, William Shakespeare.

Life in Elizabethan England could be very harsh. Plague swept the land. And the poor received little assistance from the State. Thumbscrews and the rack could be the grim prelude to the executioner’s block. But crucially, this was the age when modern Britain was born, and established independence from mainland Europe. After Sir Walter Raleigh established the colony of Virginia, English was destined to become the language of the great globe itself, and the the foundations were laid not only of later British imperial power but also of American domination of the world.

With The Elizabethans, Wilson reveals himself again as the master of the definitive, single-volume study.

A. N. Wilson was born in 1950 and educated at Rugby and New College, Oxford. A Fellow of the Royal Society of Literature, he holds a prominent position in the world of literature and journalism. He is an award-winning biographer and a celebrated novelist, winning prizes for much of his work. He lives in North London.

Also by A. N. Wilson

The Sweets of Pimlico

Who Was Oswald Fish?

The Vicar of Sorrows

My Name is Legion

A Bottle in the Smoke

A Watch in the Night

A Life of Walter Scott

A Life of John Milton

The Rise and Fall of the House of Windsor

Iris Murdoch As I Knew Her

Gillon Aitken was the ‘onlie begetter’ of this book. It was his idea that I should write it, and I am deeply grateful for all his encouragement, with this and other projects, and for his friendship over many years. Many thanks, too, to Emma Mitchell, Paul Sidey, Mandy Greenfield and George Capel who all gave support and advice. Thanks to Simon Thurley, Anna Keay, David Starkey, and Roy Strong, all experts in a field where I am an amateur, who guided my steps and suggested further reading. Georgie Wilson helped with Elizabethan Highgate and with the Armada chapter, and Ruth Guilding with the architecture. I finished the book at Lamorna Cove, Ruth’s brainchild, looking at the sea and imagining the Armada sailing by. My greatest debt, in writing this book and in understanding many others, is expressed in the dedication.

G.11631.B.L. Title Page with a Portrait of Shakespeare, from ‘Mr. William Shakespeare’s Comedies, Histories and Tragedies’, edited by J. Heminge and H. Condell, engraving by Droeshout, 1623 (engraving) © British Library Board. All Rights Reserved

Circa 1600, A naval and military battle in which the English fleet engages the Spanish Armada at Cadiz. (Photo by Hulton Archive/Getty Images) © Getty Images

A pair of embroidered gloves belonging to Queen Elizabeth I, 19th May 1953. They were presented to her during a visit to Oxford in 1566, and are on display at an exhibition of Treasures of Oxford at Goldsmith’s Hall, London. (Photo by T. Marshall/Topical Press Agency/Getty Images) © Getty Images

Britain’s Queen Elizabeth II (R) and Ireland’s President Mary McAleese stand together during a wreath laying ceremony at the Irish War memorial Garden at Islandbridge in Dublin, Ireland on May 18, 2011. Queen Elizabeth II Wednesday visited a memorial to the 49,400 Irish soldiers killed fighting for Britain in World War I in a highly-charged ceremony on the second day of her historic visit to Ireland. © PAUL ELLIS/AFP/Getty Images) AFP/Getty Images

We have lived to see the Elizabethan world come to an end. This makes
now
a very interesting time to be reconsidering the Elizabethans, but it also makes for some difficulties. As human societies and civilisations change, it is natural for them to suppose that what they do, what they think, what they eat and drink and believe is superior to what went before. While the Elizabethan world was still going on – and in some respects it was still continuing, in modified form, until the Second World War – British and American historians were able to see the reign of Queen Elizabeth I as a glory age. This was how the Elizabethans saw themselves. Their great poet, Edmund Spenser, named his Faerie Queene (who was a projection of Elizabeth herself) Gloriana, and her capital, an idealised London, he named Cleopolis – the Greek for ‘Glory-ville’. Modern historians from, let us say, James Anthony Froude (1819–84) to A.L. Rowse (1903–97) wrote about the Elizabethan Age with celebratory
brio
. They noted, correctly, that this was the age when the history of modern England (and Wales) really began. With the other British nations, Scotland and Ireland, the tale was perhaps more complicated. This was when England, having put civil wars and the superstitions of the Middle Ages behind it, emerged into the broad sunlit uplands. This was the age that saw the origins of English sea-power. In consequence, if not in Elizabeth I’s own day, America – the future United States – became an English-speaking civilisation. This was the great age when British explorers went out to every corner of the known world. Modern geography began, and the colonial expansion that was the foundation of later British power and prosperity.