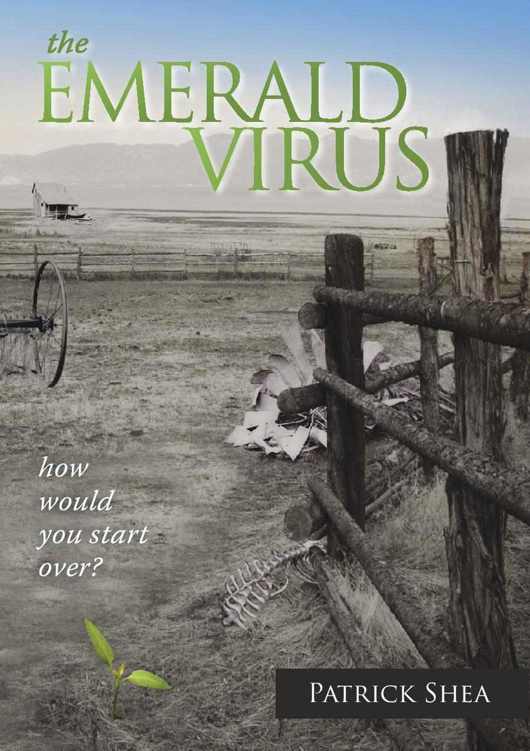 my wife Uschi. A most

Chapter One:  The
Island

Chapter Thirteen:  Turmoil in the Streets

Chapter Eighteen:  Fun in the Sun

Chapter Twenty:  The End of What We Know

Chapter Twenty One:  Where Next?

Chapter Twenty Two:  A Day in the Park

Chapter Twenty Four:  The Blizzard of 14

Chapter Twenty Six:  The Basics of Law and Order

Chapter Twenty Eight:  By the Time You Get to Phoenix

Chapter Forty One:  Meanwhile, Back at the Ranch

Chapter One:  The Island

The
virus that was to change civilization turned out to be not a new virus, but
rather a very old virus. In fact it was so old that it had been frozen in ice
for the better part of 70,000 years. Its genesis preceded man, and man had co-existed
with the virus up to the last ice age. During the time of co-existence man was
simply and naturally immune to the virus; just as in today’s world man is
immune to thousands of other viruses.  Unfortunately, that natural immunity had
been lost in the seventy millennia since the last vestiges of the virus had
been preserved in ice.

The
glacier that would release the virus into the modern world was like many others
in the Arctic in that it was unknown to anyone but locals and scientists. In
this case, only a small percentage of the 2,000 residents of the Arctic island
of Spitsbergen could identify the glacier that starts on the slopes of the
center peak of the mountains known collectively as the Three Crowns. The
glacier meanders down to the Kings Fjord, where it typically calves into either
small-or-medium-sized icebergs. Few people were aware of the exceptionally
large iceberg that separated from the glacier in the early summer, and for a
short time came to be known as J30.

Locals correctly assumed that in the remote past one of their own had named the
glacier, but no one remembered why the glacier came to be known as the Two
Bears glacier. Two Bears had been calving icebergs into Kings Fjord long before
the archipelago of Svalbard was discovered by the Dutch explorer Willem Barents
in 1596. The Svalbard icebergs were not problematic since the West Spitsbergen
current carried the icebergs north into the Arctic Ocean, far from any
commercial shipping lanes.

After calving the iceberg moved slowly into the main channel of the Kings Fjord
and passed within sight of the small scientific community of Ny-Alesund as it
moved to the eastern edge of the Greenland Sea. Ny-Alesund, the northernmost
permanent community in the world, is located on the West coast of Spitsbergen
at the mouth of Kings Fjord. The community houses a collection of research
facilities, and a small group of perhaps 40 scientists and support staff work
year round. Another 100 or so scientists are seasonal residents so on any given
day you can find as few as 40 or as many as 140 people in the village.

If you look at a map of the Arctic north of the Scandinavian Peninsula you
will see that Spitsbergen, the largest island in the small archipelago of
Svalbard, is about 450 kilometers long and varies between 40 and 225 kilometers
wide. The archipelago belongs to Norway and is located midway between the North
Pole and the north coast of Norway, which places Spitsbergen about 1100 very
cold kilometers from the Pole. Norway has had sovereignty over the archipelago
since the Svalbard treaty of 1920, although no one is sure why Norway wanted
sovereignty to begin with. By 1920 coal mining had run its course and the mines
were being abandoned by the Russian, American, Norwegian and Dutch mine owners,
who had hoped to see a sizeable return on their original investments. Each of
them had discovered that the Arctic was a fickle and expensive place in which
to place hopes.

Spitsbergen was originally known as West Spitsbergen, but since there is no
East Spitsbergen, the “West” was dropped from common use and today is
officially known as Spitsbergen. The island is home to the Zeppelin Station,
the Norwegian Polar Institute, the Polish Polar Station and about a dozen other
scientific research stations in five different locations around the island,
operated by ten different countries. All study the varying facets of the Arctic
and arctic weather. The island is also known for its large populations of polar
bears and reindeer. Both the polar bear and the reindeer populations far outnumber
the human population of the island, and account for much of the tourism enjoyed
by Spitsbergen.

During the 17
th
and 18
th
centuries the Spitsbergen
harbors were a seasonal home for whaling ships from Norway, the Netherlands,
France and England. Tens of thousands of whales were hunted from the
surrounding waters and during this time the Greenland Whale became extinct. By
1900 whaling was a footnote in history; the coal had been mined out and the
coal towns had been abandoned; mining for metals and minerals had never proven
successful and the island was left to science and tourism.

Another significant historical note claimed by Svalbard is that the Arctic
explorer Roald Amundsen used the island of Spitsbergen from which to launch his
air journey over the North Pole. This happened after Amundsen and his party
reached the South Pole by dog sled in December 1911. In May 1926 Roald
Amundsen, along with American explorer Lincoln Ellsworth and Italian explorer
and engineer Umberto Nobile, departed from Spitsbergen aboard the dirigible
Norge. The three explorers, with a crew of 13 others, flew over the North Pole
to Teller, Alaska, in the first flight across the Arctic.

The geography and topography of Spitsbergen were important factors when it came
time to decide where to build a seed vault. The decision was made to locate the
vault near Longyearbyen, the capital city of Svalbard located near the center
of Spitsbergen. The vault is now known as “The Svalbard International Seed
Vault.” Construction of this unique vault began in the summer of 2006 and was
completed in early 2008. The initial start-up cost of the construction was
estimated at five million dollars and was funded by Norway. However,
contributions to the effort were made by many of the world’s countries,
corporations and foundations. These contributions were needed to cover the cost
of packaging and shipping seeds from around the world, and for the annual operating
costs of the project.

The vault has the capacity to store up to 4.5 million seed packets and to
protect them from future catastrophe, such as a nuclear war. The vault was
hollowed out of a sandstone mountain near Longyearbyen and its walls are made of
steel-reinforced concrete more than a meter thick. It is accessible through a
140 meter-long tunnel with dual blast doors that lead to two separate vaults,
each accessible through two air locks. The vaults are cooled to -30° Celsius to
preserve the seeds. The hope is that the primary seeds of the world will
survive for hundreds if not thousands of years. The vaults themselves are
located 130 meters above sea level to ensure they stay dry even if the polar
icecaps melt, which would occur following a nuclear war.

Unique to Spitsbergen is that the island lays at the confluence of four of the
world’s seas. The Arctic Ocean lies directly to the north, the Barents Sea is
to the east, the Norwegian Sea is to the south and the Greenland Sea is to the west.
While the waters of the North Atlantic Ocean tend to swirl generally clockwise,
the waters of these northern seas follow a different set of rules.

J30 calved as an unusually large iceberg into the Kings Fjord. While icebergs
typically show an eighth to a tenth of their mass above sea level, this iceberg
displayed one-sixth of its mass above sea level. Archimedes’ principal of
buoyancy still applied, but in this case it also showed that the weight of this
iceberg was substantially less than normal. The huge ice cave in the middle of
J30 accounted for the difference. While J30 was about 50 meters in height, the
cave itself was about 20 meters high and 150 meters long, nearly as long as the
iceberg. J30 would be officially named J-30/14 by the Polar Institute when it
entered the Greenland Sea. J was for the month of June, 14 for the year, and 30
because this was the 30
th
named iceberg during the month of June.
The other 29 all originated from Greenland or farther north in the Arctic Ocean
itself. Using hindsight J30 could have been given a more exciting name; this
would have been appropriate since J30 carried a threat to civilization.

The cave inside the iceberg carried millions of tiny pods made of an organic
material that was very thin and very light. Each pod was nearly hollow, about
the size of a pearl, and was a light brown or tan in color. Each pod had a
small circular indentation where it had once attached to a vine.

Prior to the last ice age this vine was common vegetation that covered the
southern Arctic lands. The vine grew at temperatures just above freezing and it
thrived throughout the islands of Svalbard due to the relatively moderate
arctic climate enjoyed by the archipelago. The vines did not fare well in
warmer climates and daytime temperatures above 50 degrees would kill the vine.
All of these vines were either killed outright or were frozen in ice during the
Weichsel glaciations that began during the Pleistocene era in the sub-arctic
regions of the world. The only remnants of this kind of vine were frozen deep
in the glaciers of the Arctic and had been there for some 70,000 years. J30
carried the first of the frozen vines and seed pods to see daylight in seventy
millennia.

HOGS #5: TARGET SADDAM (Jim DeFelice’s HOGS First Gulf War series) by DeFelice, Jim
I Ain't Me No More by E.N. Joy
The Almost Wives Club: Kate by Nancy Warren
Make Me Forget by Anna Brooks
The Beast with 1000 Eyes by Laura Dower
Vendetta by Michaels, Fern
The City of Lovely Brothers by Viz, Anel
Have His Carcase by Dorothy L. Sayers
Anything But Love by Abigail Strom
Darkness Falls by Jeremy Bishop, Daniel S. Boucher