Read The English Lily (Tales of the Scrimshaw Doll) Online

The English Lily (Tales of the Scrimshaw Doll) 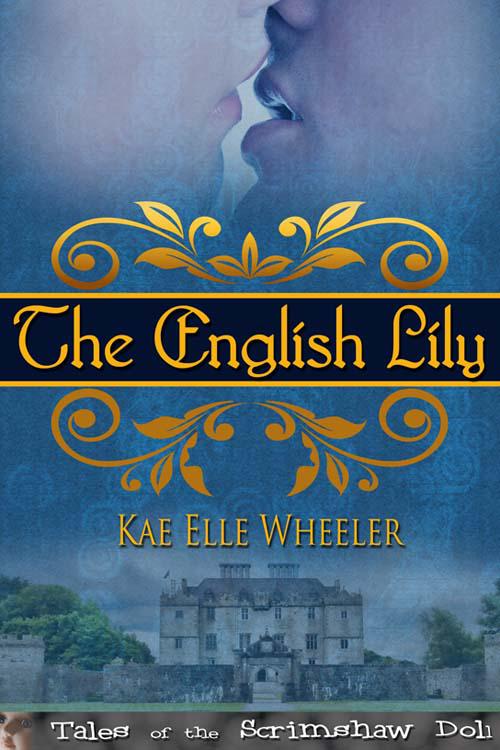 Praise for THE ENGLISH LILY

Tales of the Scrimshaw Doll

Tales of the Scrimshaw Doll

Praise for
THE ENGLISH LILY

“A very romantic, sweetly sensual, fun fairy-tale of a story!”

“Kathy L Wheeler gives us a tantalizing romance, adventure on the high seas, and a touch of magic in the extremely enjoyable short story,
THE ENGLISH LILY
.”

To my very excellent critique partners.

Her life was over.

All hopes and dreams of beautiful children with the love of her life—finished. What did it matter that she, Lady Kendra Frazier, daughter of the esteemed Earl of Macclesfield, distant cousin to England’s throne, was only eighteen in years? Reassurances of time to secure a splendid match were all for naught without the one man whose kisses would have made her knees weak, would have sent her pulse racing—and now that he’d married another, he would never learn how perfect they were for one another.

Kendra brushed away a tear and gazed out over the vast gray-blue of the Atlantic Ocean. Chin propped in a curled palm, elbow resting on the wooden rail, she contemplated the failure of her short life.

Despair filled her soul. Her life had shattered before her very eyes when
Nobile dei Conti
Alessandro de Lecce kissed his new wife, Lady Esmeralda, sister to Princess Cinderella of Chalmers Kingdom. Apparently, Lady Esmeralda’s fluttering eyes had not put him off one whit.

What could Lady Esmeralda offer that Kendra couldn’t?

Only the batting-eye affliction, she fumed. That alone should have served as a deterrent.

Yet who was on a ship running away to…America, of all places? Not Lady Esmeralda—or should she say, the new
Countess
de Lecce. To be found wanting next to the likes of that she-devil… Well, what alternative had she but to run, as far and as fast as possible?

“Milady, don’t you think you should don your bonnet?”

“You’ll catch your death, you will.” Without waiting for an answer, Louisa laid the cloak about Kendra’s shoulders. “’Tis chilly as a reptile’s beady eyes, I say.”

“A reptile’s beady eyes,” Kendra repeated. “That’s somewhat dramatic, I daresay.” The irony of drama was not lost on Kendra. “The sun is out, Louisa.” Kendra shivered and prayed she would not fall ill on the vast journey she’d self-imposed.

“Aye, but the wind is likely as not to toss you overboard.” Louisa held out the bonnet. “One should be aware with as fair a complexion as yours, milady.”

“Ah,
mais oui
,
mademoiselle
, so you should.” The deep familiar pitch startled Kendra so abruptly she failed to grasp the bonnet securely. The wind took prompt possession, dangling it over the open sea. Surprisingly, it remained quite steadfast in its position, held with strong fingers by its delicate ribbons, much like a kite begging its flight to freedom.

Viscount Lawrie, owner of that husky tone, brought the hat over her head and secured the ribbons beneath her chin. His fingers were warm, and the
frisson
of awareness pitched her off balance. She pushed his hands away to finish the deed herself. Not an easy task with gloved fingers.

“What on earth are you doing here, my lord? I would have thought you would be nursing a broken heart over losing the fair Esmeralda to your old friend Alessandro,” she snapped, but it resonated more breathless than angry. How utterly mortifying, should he believe
he
wrought such emotion from her.

Kendra closed her eyes, hating to accede. She
was
jealous. Though she refused to admit it to a…a
magician,
of all people. “I wouldn’t lower myself,” she sniffed.

He had the nerve to chuckle. “But of course not.”

Kendra opened her eyes and glared at the smug viscount. Their parents were colleagues in the House of Lords, and, due to Papa’s acquaintance, she’d met his father, Gareth Gray, the Earl of Yarmouth. The earl’s son had rarely been present. He’d spent his time scandalously touring the continent as a renowned stage performer, quite infamously known as the Chevalier Joseph Pinetti. ’Twas said his mother was French, his grandfather Italian. The man was as confusing as his lineage. Trade was gauche, but to tread the footboards... She shuddered. Beyond the pale!

Broad shoulders left little doubt of his ability to haul away some defenseless damsel with no argument. She could well imagine the sold-out crowds as he towered over an enraptured audience, bolstering his commanding ego even higher. Admitting aloud how avidly curious she was about his life… No, that was something she would harbor in secret.

She was much too sophisticated to succumb to a lesser woman’s baser desires. No, what worried her was the depth of those obsidian eyes, and the brush of dark beard covering the strong jaw. A hint of danger was unmistakable. Irresistible to some. She shivered. Unfortunately, not so irresistible to Lady Esmeralda, she thought glumly.

She narrowed her eyes at him. “Were you following me, sir?”

He shrugged. “How was I to follow when you registered under a false name—Kate Faye?”

“Mercifully, you brought your maid along. So I gather you possess some sense. Your papa, by the bye, was devastated by your abrupt departure. As the gentleman I am, I humbly offered my services to return you safely to the roost.” He pursed his lips. “I just want to know what fool allowed your escape.” He said this under his breath, but ’twas distinctly clear to her.

“I am not a child,” she informed him blandly.

Joseph watched brilliant fire sparkle from blue eyes that should have matched the icy blue-gray of the Atlantic but resembled more the heated flame he used in some of his more daring experiments. He had to bite back a grin.

“Excuse me?” Kendra demanded. Havoc played freely upon the ribbons beneath her chin, flapping them furiously in the wind. She was a delectable piece, with her blonde curls dancing in their efforts to break free. Full skirts molded her slender body, compliments of the brisk breeze.

“Do you realize the foolish risk you’ve taken?” he demanded.

“Foolish?” she repeated. Outrage lit her features from her usual calm façade. She was the epitome of the English Lily with her white skin and delicate features. Instinct told him she was a lot more trouble than the usual debutantes.

Joseph debated whether to enlighten her as to the reality on vessels such as these on transatlantic crossings. He had half a mind to scare some sense into her, but they had a long voyage ahead. He’d promised her father a safe return, first and foremost. And Joseph was, at the very least, a man of his word.

In that vein, he intentionally neglected mentioning the other promise he’d made to her father—to bring her home a
married
woman. Her headstrong ways had tipped the scales in his favor. The earl was actually furious with his only child, which as Joseph understood was quite rare. “I’m not the only one searching for you, you know.”

She frowned. “I don’t understand.”

“I believe Niccòlo de Lecce was neck to neck with me in his efforts to locate you.” Niccòlo was Alessandro’s younger brother. The schoolboy crush he had on Lady Kendra was an embarrassment to the male gender. Joseph doubted Niccòlo could handle someone of Kendra’s temperament. She was a spoiled child used to having things go her way, pouting when they didn’t. Hence, her decision to flee the bosom of her family when his very good friend, Alessandro, married Cinderella’s flickering-eyed sister, Lady Esmeralda.

“Dear Niccòlo.” Her palm fluttered to her chest.

Did she have to sound so elated? “Indeed. I daresay the poor boy will be heartbroken to find you’ve escaped his boyish charms. How is it you managed to get aboard without male supervision, Lady Kendra? And coin…How did you pay your passage?” The more Joseph’s thoughts followed that line, the more his pulse throbbed in aggravation...and something akin to fear that she would be so reckless.

Kendra straightened her small frame, rising only to his chin. Several unreadable expressions crossed her delicate features. She glanced about before answering, her voice lowered. “Not that I owe you any explanation, my lord, but I
am
an heiress.”

“You mean Kate Faye is an heiress, as well? I know for certain you did not use your father’s name.”

“Don’t be ridiculous, sir.” She let out an impatient breath. “What purpose would that have served? I-I gave the captain my locket. ’Tis fashioned of gold. And, well, mentioned I was with the other young ladies aboard.” She clutched her skirts up, prepared to spin away.

He caught her arm before she could make good her escape. “Do you have any inkling what can happen to a young woman traveling alone?” he hissed.

“Of course I do,” she said trying to shake off his hold. “And if anything untoward should begin—” She feigned the accent of one of the crew— “I’ll insinuate meself as one of the crew, matey.”

Incredible. Joseph had overheard the boatswain speaking to the first mate earlier. She adopted their inflections to near faultlessness.

“Otherwise,” she continued, back to her perfect and proper English, “I shall inform the captain of my true identity.”

Joseph found his voice. “And what good, pray tell, would that do?”

“Plenty, as my father
owns
the blasted
Cécile
,” she informed him, hotly. “Now, if you will excuse me, sir, ’tis time I took my leave. Come, Louisa.”

Surprise had him letting up on his grip. She snatched her arm away and marched across the deck. Joseph watched her slender form disappear into the companionway. He counted himself very fortunate to have found her, as he’d almost missed the damned ship. The chit had something he dearly needed.

It hadn’t occurred to him she would use a different name until he’d spotted a Kate Faye traveling with one maid on the passenger list. Intuition struck, and he’d taken a chance, just minutes before the ship launched. Now they were on a voyage that could last as long as seven or eight weeks, depending on the godforsaken weather.