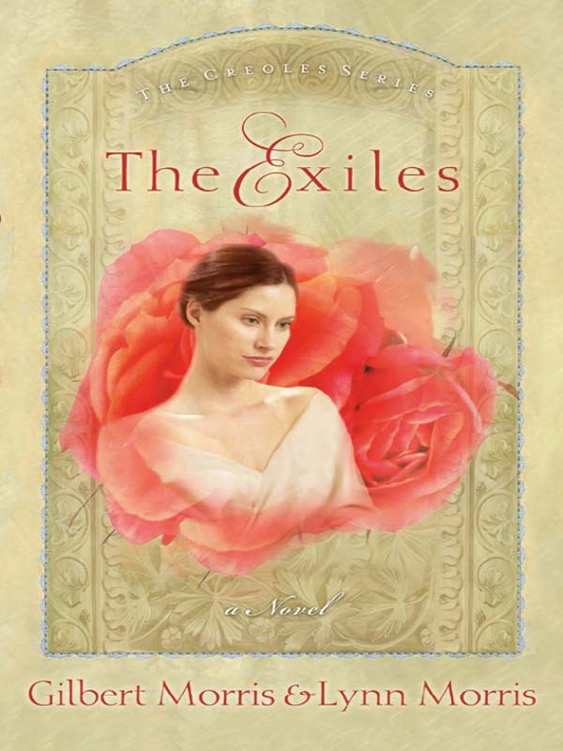 All rights reserved. Written permission must be secured from the publisher to use or reproduce any part of this book, except for brief quotations for critical reviews and articles.

Scripture quotations are from the King James Version (KJV).

Publisher’s Note: This novel is a work of fiction. All characters, plot, and events are the product of the author’s imagination. All characters are fictional, and any resemblance to persons living or dead is strictly coincidental.

To Kate Larimore—
Thank you, my dear Kate, for being who you are!
There are some dark things in this old world, but you have cheered my journey with your lovely light!

In the early nineteenth century, the culture of New Orleans was as rich and wildly varied as the citizens’ complexions. Pure Spanish families, descended from the haughty dons, still dwelt in the city, and some pure French families resided there, but many were already mingled with both Spanish and Africans. Acadians—or “Cajuns” as they came to be called—lived outside of the city. This small pocket of Frenchmen had wandered far from their homes, but like many groups in the city, they stubbornly kept much of their eighteenth-century heritage intact and ingrained.

Of course there were many slaves, but there were also the
gen de coulur libres,
or free men and women of color. Some of these were pure Africans, but most of them were the mulattoes, griffes, quadroons, and octoroons who were the result of French and Spanish blending with slaves. There were Americans, too, though they were strictly confined to the “American district.” And there were Creoles, people of French and Spanish blood who were born outside of their native countries. Creoles born in New Orleans were Louisianians, but they were not considered to be Americans.

All well-born Creole families sent their children to receive a classical education at the Ursuline Convent or the Jesuit schools, and both institutions accepted charity children.

This series of novels traces the history of four young women who were fellow students at the Ursuline Convent School:

Aimee Fontaine looked out of the open carriage and immediately shut her eyes. She turned and threw her arms around her husband and cried, “Cretien, we’ll all be killed!”

He held her tightly and said, “We won’t be killed, darling. It’s not far to the docks, and once we get on board the ship we’ll be safe.”

Opening her eyes, Aimee moved her head back far enough to get a good view of Cretien’s face, and the very sight of it encouraged her. Faults her husband might have, but if Cretien Fontaine was a coward, no one had ever found out about it. His chestnut hair escaped the tall black top hat, and his brown eyes glowed as they always did when he was excited. He showed no fear whatsoever.

“They’ve gone crazy,” she whispered, holding on to Cretien’s arm.

“Revolutionaries are always crazy,” Cretien said. He turned to the driver, saying, “Get in the back with Elise, Robert. I’ll drive.”

“Mind what I say!” Cretien’s eyes flashed, and Robert got up awkwardly and fell into the back, where Elise Debon was crouched down, her large eyes frightened. Cretien took the lines and slapped them on the backs of the pair of bays, holding the horses firmly. “They’re crazy fools! They don’t even know what they’re fighting for.”

Others besides Cretien had made that remark concerning the uproar that had shaken Cuba to its very foundation. The countryside was alive with flames where men, apparently driven mad by the revolutionary fervor, had set fire to the homes of innocent people. The government had tottered and collapsed, and now Havana was packed with a mindless mass of humanity.

Darkness had fallen, but men carrying torches held them high, and the flickering red flames cast shadows over cruel faces loose with drink. The air was filled with drunken cries and screams of women who were being attacked regardless of their politics. Gunfire rattled, sounding a deadly punctuation.

“We’ll never be able to get through this crowd, Cretien,” Aimee whispered.

Indeed, it did look impossible, for the street that led to the docks was filled with milling people. Many of them were armed men, but some were the helpless victims of the revolutionaries.

Cretien pulled his hat down firmly, reached low, and pulled the whip from the socket. “Hold on, everybody!” he cried. He slashed the rumps of the horses furiously, and the bays lunged forward against their collars. “Get out of the way! Clear the way!” Cretien yelled. He stood to his feet and whipped at men who reached out to pull him from the carriage.

Once Aimee saw the whip strike a man right across the cheek and leave a bleeding cut. The man fell back with a scream and was seen no more.

Aimee hid her eyes, for the horses ran over anyone in their way, and the wheels bumped over the bodies that had fallen. The carriage careened wildly, and the shouts grew louder. A gunshot sounded clearly close to the carriage. Aimee’s heart seemed to stop, but the marksman had missed.

“We’ll be all right,” Cretien said. He sat back down but kept the horses at a fast clip. “There’s the ship, down there.” A few moments later he pulled the horses up short, and they stood trembling and snorting under the light of the lanterns that hung from posts on the dock.
The Empress,
one of the new breed of steamships, loomed large and black against the ebony sky. “Robert, you see to the luggage. I’ll take care of the women.”

Aimee stood, and Cretien lifted her into his arms and set her down firmly on the dock. She clung to him for a moment, but he gave her a quick hug and said, “We’re all right now. Don’t worry. I’ll get you and Elise on board, and then I’ll come back to help Robert with the luggage.”

Aimee gratefully leaned against her husband, but they had not gone three steps toward the gangplank when their way was blocked by a roughly dressed group of men. All had a wolfish look, and their eyes were wild with drink.

“That’s right. He’s an aristocrat.” The speaker, who wore a crimson rag around his forehead, pulled a knife from his belt and laughed drunkenly. “His kind’s gone forever. Give us what you’ve got, and maybe we’ll let you go.”

In one smooth motion, Cretien pulled a pistol from under his coat and aimed at the man bearing the knife. The shot struck the ruffian in the upper arm. The wounded man shouted, “That’s the only shot he’s got! Get him!”

The men moved forward, eyes glittering. Suddenly another shot rang out, and a short, stocky man staggered and grabbed his thigh.

Robert, Cretien’s manservant, stepped out and said, “The rest of you had better leave.”

But the three were so drunk they could not think. They all drew knives and, screaming, surged ahead. Cretien reached into the carriage and produced a cane. He pulled a sword from the hollow container, and when one of the men came close he swung the blade in a circular motion. The tip of the sword cut a gash in the chest of the man.

“I’d advise you to leave before you are all dead,” Cretien said tightly.

“Come on, let’s get out of here!” the leader cried. Since three of the four had been wounded, his words were convincing. They all turned and made their way, cursing and holding their wounds.

“Come along, Aimee,” Cretien said at once. His face was pale, and the violence had shaken him, for he was not a man of action. “And you, Elise, I’ll get you on board. Robert, start loading the luggage. I’ll be back to help you.”

Ten minutes later Cretien was greeted by a barrel-shaped man with a clipped white beard and mustache. “I’m Captain Smith. You had trouble on the dock. It’s a good thing you made it. The roughs are out in force.”

“So I noticed.” Cretien glanced at the milling crowd, then turned to face the captain. “Is there any chance they will attack the ship?”

“Not likely! They tried that once, but my men are all armed and fine shots. They won’t try that again!”

“Good! We need to get my wife and her maid to our cabin. It’s been quite an experience.”

“Certainly. I’ll take you myself.” Captain Smith led Cretien and the two women to a steep stairway, and when they reached the lower deck, he led them down a narrow corridor to a door. “This will be yours and your wife’s room, sir. And your servants—we have separate accommodations for them.”

“Thank you, Captain. When will we be in New Orleans?”

“Two days at the most, barring engine trouble. When you get the ladies settled, we’ll have something for you to eat.”

“That would be kind of you, Captain Smith.”

Aimee stepped through the door and took a look around the cabin, lit by a single lantern. It was a small room with two beds, a chest, a portable toilet, and a vanity with a washstand.

“Take care of your mistress, Elise. I’ll go help Robert with the luggage.”

“Come back quickly, will you, Cretien?” Aimee whispered.

“Of course. You rest yourself. I won’t be long.”

As soon as Cretien left, Elise fluttered over Aimee, helping her take off her coat and bonnet. “We’d all have been murdered if it hadn’t been for the master.”

“Yes, Elise, I think we would.” She hesitated, then sat down on the bunk. “He’s a strong man, and I thank God that he is here to take care of us.”

Cretien leaned back in his chair, studied his hand, then pushed some chips forward. “I’ll meet your bet and raise you ten.” He felt good, for he had slept well the previous night, after a good supper provided by Captain Smith. His wife had slept little enough, but there was nothing he could do for that.

Cretien smiled at the uncertainty in his opponent, a slender man with a razor-thin mustache and hooded green eyes. “Well, Monsieur Sedan, what do you say? Would you like a chance to win some of your money back?”

Sedan threw his cards down. “I never play a man when he’s riding on his luck.” He pulled a cheroot from his inner pocket, bit the end off, and lit it. When the tip was glowing he said, “Perhaps tomorrow.”

Sweat by Mark Gilleo
13 Tales To Give You Night Terrors by Elliot Arthur Cross
Flesh 01.5 Room With a View: Hot Down Under by Kylie Scott
The Uninvited Guests by Sadie Jones
Ell Donsaii 13: DNA by Laurence Dahners
A Winter Sabbatical (Books We Love holiday romance) by Wright, Cheryl
The Orphans of Race Point: A Novel by Patry Francis
Lost Angel (The List #1) by N K Love
The Echolone Mine by Elaina J Davidson
Classic Spy Novels 3-Book Bundle by Alan Furst