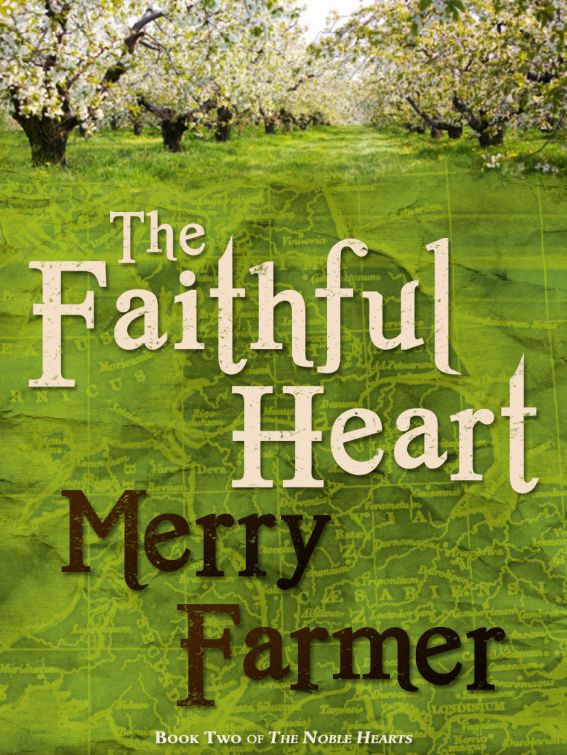 This book is a work of fiction. Names,
characters, places, and incidents are products of the author’s
imagination or are used fictitiously. Any resemblance to actual
events or locales or persons, living or dead, is entirely
coincidental.

Thanks once again to my wonderful editor,
Alison Dasho. I couldn’t do this without her. Thanks also to my
dear friend, Jonathan Longstaff, for creating yet another gorgeous
cover design. Special thanks to my critique partners, Julie Tague
and Jes Bunsick, to Carly Cole for “The Smirk Report”, and all of
my fabulous friends online who remind me why I love writing so
much.

I wasn’t born with a sister, but I did find one along
the way.

Madeline had never done anything bad in her
life. Until now. She yanked the dull gray wimple off of her head
and threw it behind a bush, praying that the shadows in the convent
gardens would hide her. She crept through the darkness, keeping her
hands and body pressed against the wall on her way to the gate. It
would be locked this late at night but with the dark to cover her
she might be able to climb it and make her escape unnoticed.

An owl hooted nearby and she gasped, eyes
flying wide. She held her breath at the flutter of wings that
followed and squeezed her eyes shut again, pressing into the wall
as if she could become one with the stone. The convent garden was
silent but for the rustle of the Spring breeze and the owl. Still
she listened, frozen.

Only when she was close to passing out did
she let out her breath and resume creeping. Dread over what she was
doing, what she had been forced to do, made every step precarious,
every pebble a mountain. The gate that separated the prison of the
convent from the promise of the outside world loomed like a titan
in the dark. She’d worried so much about reaching it without being
seen that she hadn’t given much thought to scaling it. Now that she
was here its height and the thick iron spikes lining the top gave
her second thoughts. She’d climbed trees and walls every day as a
child, and brought her father’s wrath down on herself for it, but
this challenge gave her pause.

“All problems look bigger in the dark.”

Madeline yelped and spun to press her back
against the great iron gate at the whisper behind her. The tiny
form of Sister Bernadette shifted out of the shadows. The serene
old nun stared at her as if they had met in the cloisters at
midday.

“Sister Bernadette, I can explain.” Madeline
wasn’t sure how she found her voice. “I was just-”

“If I had a handsome young man waiting for me
on the other side I would run as well.”

Madeline closed her gaping mouth and blinked
at the woman. She had tried so hard to be good, to obey the rules
and forget what was in her heart, but Sister Bernadette knew her
too well. All of her resolve, all of the fortitude she had built up
since her trip to Derby, since meeting the enigma that was Jack
Tanner, melted around her.

“I have to go back to him.” She rushed to
grasp Sister Bernadette’s hands. Tears that she had been holding
back through months of prayer and punishment flowed. “I can’t live
without him, Sister Bernadette. I tried, truly I did, but I
can’t.”

“I know, child.” The gentle nun put one frail
arm around her shoulders.

“I tried,” she repeated. “I tried to be
strong when Mother Superior told me it was a sin to speak of him. I
tried to forget him when father refused to let me leave the order.
I tried to obey, but….” She gulped at the memories of the
confinements, the involuntary fasts, the days on end of prayer on
her knees on cold stone floors all winter that had been imposed on
her for her rebelliousness. “Oh, Sister Bernadette,” she broke
down, “I love him.”

“I know you do.” Sister Bernadette dropped
her whisper to the mere hint of sound, walking Madeline to the
gate. “You are young, my dear, and the hearts of young women should
be filled with love.”

“But I’ve tried to fill my heart with love.
With love of God.” Madeline sniffled, wiping her face on the sleeve
of her threadbare habit. “It’s what my father wanted.”

Sister Bernadette patted her back. “How can a
father expect his young daughter to be faithful to God when she has
the love of a handsome red-headed young man?”

Madeline could only stare back at the woman.
“Sister Bernadette!” she squeaked, “How can you say that?”

“Easily, my child,” she laughed with a lilt
that matched the Spring breeze and smoothed a hand along Madeline’s
close-cropped hair. “Was it not your Jack who used to tell you that
he never thought you were a nun?”

“Yes.” The memory of Jack’s sly smirk and
wink as he held her close and stole a kiss, the only kiss she had
ever had in her life, brought her to tears. Jack had flirted with
her, said delicious, irreverent things to her, had even rescued her
from the tower where Lord Alfred of Buxton had imprisoned her, but
he had never once treated her like a nun. “Oh Sister, my father
will never approve of Jack. He only believes in power and rules. If
he finds out I’ve left the convent….”

“You were not born for this life, my child.”
Sister Bernadette laid a hand on the side of her flushed face with
a wistful smile. “It was wrong of your father to lock you away
here. You were meant for a different world.”

Her protest was cut short as Sister
Bernadette drew a loop of iron keys from her belt and stepped past
her towards the gate. In nothing but the moonlight she found the
key that fit the lock, turned it, and pushed the gate open.

“But what will happen to you?” Madeline
gasped.

“What will you say when they find out I’m
gone? What will you do if my father comes here looking for
answers?” She blanched at the thought and glanced back towards the
imposing stone of the convent, second-guessing her decision to
run.

Sister Bernadette laughed. The sparkle in the
old nun’s eyes reminded Madeline of why in this prison full of
gloomy nuns intent on their vows she had never felt alone. “A love
like yours should never fear reproach from a mere earthly father.”
She shook her head. “Have faith in that if nothing else. Besides,
who will tell him how you escaped?” She reached into her pocket
again and took out a small coin-purse. “I think it is time I took a
vow of silence.”

“Oh no, Sister Bernadette.” She tried to give
the money back when the purse was pressed into her hands.

“How I choose to show my devotion is no
concern of yours,” she cut the protest short. “Now go, my dear.
Derby is a long way off. You have quite a journey ahead of
you.”

Madeline wavered, glancing over her shoulder
at the rippling field that surrounded the convent. The town of
Coventry was half a day’s walk. She had planned to keep to the edge
of the forest, to sneak her way back home to Derby, traveling at
night so as not to be seen. A few coins could buy her a place on a
farmer’s cart or a merchant’s wagon. A few coins could take her to
Jack that much sooner.

She closed her hand around the purse and gave
Sister Bernadette one last fierce hug. “I’ll never forget you.” The
words caught in her throat. “You’ve saved my life.”

The old nun laughed and let her go, walking
her through the convent gate and into the world. “Go now, my dear
one, but be careful. You’re not free yet.”

Kedleridge Hall was nowhere near as grand as
Windale Manor. It contained one fair-sized room downstairs with a
large fireplace and tiny windows as well as a pantry and a closet
of a bedroom where Kedleridge’s steward slept. The master bedroom
upstairs wasn’t more than a square box with one shuttered window, a
fireplace and a large bed hung with old curtains. But as the former
peasant Jack Tanner, now Lord John of Kedleridge, rolled over in
bed and squinted bleary eyes at the morning light seeping in
through the shutters, he swore it was the best place on earth.

Jack let out a sigh and buried his face in
the large pillow that had come with the bed. Four months since
Prince John had made him a nob after the mess with Buxton and he
was sure beyond any doubt that this was the best part of the job.
The bed. No more sleeping out on a cold forest floor with creaking
trees over his head, the way there had been with Ethan. No more
searching around Derby Castle for an extra blanket like he’d had to
do when Buxton was sheriff. He had his own bed now, all his own.
Not that he would’ve have minded sharing it.

He tossed to his back and threw a bare arm
over his face to cover his eyes. The crucifix from the rose quartz
rosary wound around his left wrist dangled by his ear. He grinned
as it brushed his jaw, imagining it was the caress of a certain
green-eyed nun. He lowered his hand to his chest and unwound the
rosary, taking its beads in both hands and fondling them.

“Hail Madeline, full of grace….” He fingered
the beads, bringing them to his lips with a saucy sparkle in his
eyes. “Blessed art thou among women and blessed is each delicious
freckle on your face.” He grinned at the bittersweet memory of
creamy skin, a touch of strawberry-blonde hair under a heavy gray
wimple, and ran the beads across his smiling mouth. He remembered
the way the freckles played across her face, the way he had seen
more on her wrists and caught himself imagining that she was
covered with freckles all over. All over. He flicked out his tongue
and sucked on the rosary’s pink beads as he remembered the way she
had tasted the one sweet time he had kissed her. Eyes closed, he
slipped a hand under the covers to help his imagination down its
wicked path.

A knock at the door interrupted him
mid-stroke and he jerked as if splashed with cold water. The door
opened and his dour-faced steward stepped in carrying a pitcher of
steaming water and a towel. “Good morning, my lord,” he nodded,
face serious, eyes averted.

“Oy!” Jack scrambled to sit up, hiding the
evidence of what he’d been about to do under layers of blankets.
“Don’t call me that, mate.”

“Yes, sir.” Even with his eyes averted Jack
was sure the man could read his thoughts. Simon McFarland knew
everything. He set the pitcher and towel on a small table beside
the bed. Simon’s short hair stuck up at odd angles. His goatee was
impeccably trimmed and his clothes so tidy even Ethan’s faithful
servant Toby would have been impressed. But it was Simon’s eyes
that Jack couldn’t figure out. Their pale blue depths never
smiled.